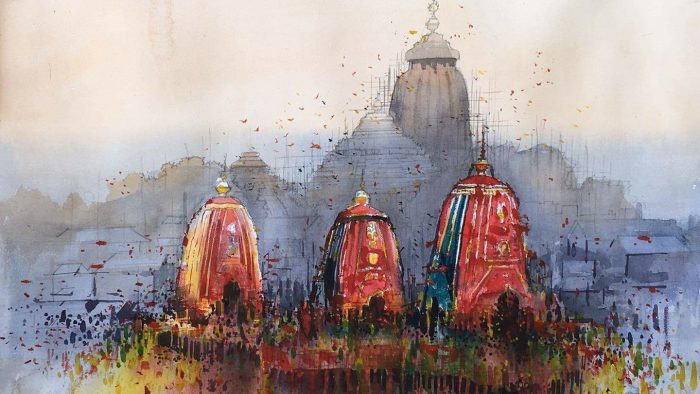 The Jagannath is a Mysterium Tremendum. Jagannath Consciousness has a rationale coupled to all its rituals while continuing to remain in agreement with mysticism. The most superlative aspect of the Jagannath culture is its intent to promote religious unity and universal brotherhood. The temple regulations strictly allow only Hindus to enter the Srimandira but this same rule is modified when Shri Jagannath gives an audience to the entire humankind irrespective of caste, creed, religion, social status, gender and nationality in the annual Ratha Yatra festival where He truly manifests Himself as Jagannath – The Lord of the Universe and all are invited to be a part of this harmonious religious confluence.

The Ratha Yatra of Shri Jagannath is a secular initiative of the Living God who undertakes the majestic chariot ride ‘for’ His devotees irrespective of any bias. His Ratha is pulled ‘by’ all those who desire to do so irrespectively of any social or religious restriction. He remains in spiritual amalgamation ‘of’ the people who wish His companionship. Thus, fulfilling the basic ingredients of any democracy – By the people, of the people and for the people, making Jagannath is the most ‘Democratic Divine’.

The secular message of the Ratha Yatra can be well understood from the story of His Muslim devotee Salabega that dates back to around circa AD 1607-1608. Popularly known as Bhakta Salabega, this dedicated devotee of Jagannath was the son of a Muslim Subedar and a Brahmin mother. Salabega learned about Jagannath from his mother and became an ardent devotee of Shri Jagannath. Being a Muslim he could only witness Lord Jagannath on the chariot once in a year. Once During the Ratha Yatra, he was returning from Vrindavan but could not reach on the day of Ratha Yatra. He prayed to Shri Jagannath to wait for him on the chariot till he reached Puri and saw Him. The wish was granted and Shri Jagannth’s Ratha- Nandighosa did not move until His Muslim devotee Sal Beg reached there and got His audience. This story encapsulates the message of universal brotherhood and secular sentiments that Ratha Yatra endorses. 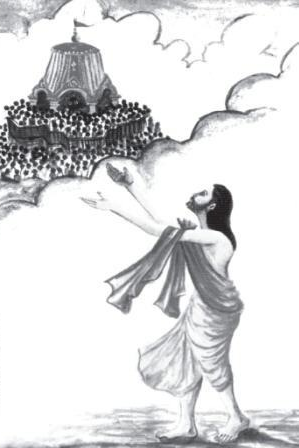 The ‘color’ study of the three Deities is another pointer that patronizes global unity and world peace. The hue of the Gods signifies the peaceful coexistence and acceptance of miscellaneous human races as one in the Eyes of the Divine. The black color of Shri Jagannath represents the black Afro- Asiatic population, The White color of Shri Balabhadra represents the white European race and the Yellow color of Devi Subhadra signifies the Mongolian race.  The Triad unifies all the races in themselves, defying racial discrimination. His discs like eyes encompass the entire cosmos. The eyes have both the Sun and the moon in them and are called ‘Sashi Surya Netram’ Sashi meaning Moon and Surya meaning Sun. His vision is an expression of the Vedic thought of ‘Nirapeksha Netra’. A vision that is free from any discrimination. 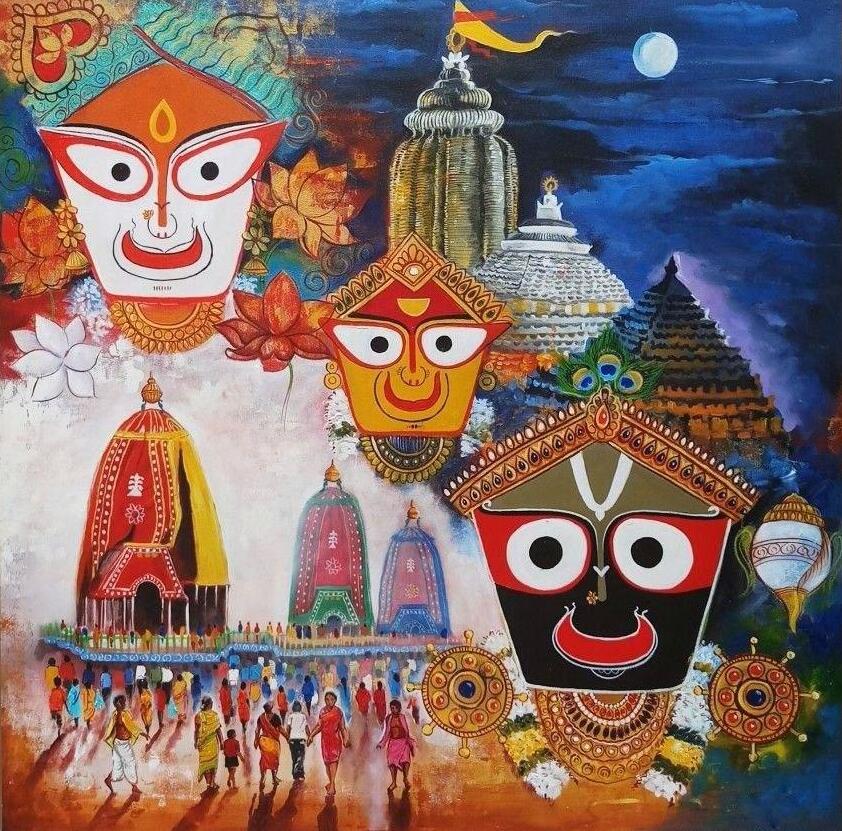 The Ratha Yatra of Shri Jagannath is a paradigm of national integration, socio-cultural cooperation, and religious inclusiveness. An essential facet of the Jagannath culture remains in the exclusive space that it has created by encouraging the inclusiveness for all sects of Hindu Dharma as well as other religions. The Vaishnavas regard Lord Jagannath as Vishnu. The Sakta consider Him Bhairava and Goddess Bimala as Shakti. The Shaivas offer their respect to Jagannath as Shiva. The Ganapatyas offer their devotion to Shri Jagannath as Ganesh and clearly evident when the Lord gives darshan in Gajanna Vesha during the Snana Purnima ritual. The Vajrayana Tantrik Buddhist worship Jagannath as Buddhaavatara. Jagannath is also identified with Dakshina Kali. According to the Bhagabata School– Jagannath , Balabhadra Subhadra, and Sudarshan are seen as Vasudev, Snakarsana, Pradyumna, and Annirudha. He is the ‘Mahayanic Shunya’ and the ‘Advaitic Brahma’.

The concept of Dharma as understood in Sanatan Dharma is decisively maintained in the Jagannath culture. The word dharma is derived from the Sanskrit word ‘Dhr’. The root word signifies the persuasion of an ideology and institutions that keeps an individual fixed purposefully to his social conditions. Jagannath consciousness has maintained the spirit of dharma through inclusiveness, integration, and growth. It has consciously accepted social changes and new values that have evolved with time. The lines below by Adi Shankaracharya aptly describe the compassion and involvement of Jagannath with his devotees during the Ratha Yatra and express the social inclusiveness that the festival breathes.

The above lines mean: He who, when is going to be mounted on His Ratha ,- the Chariot along the streets during the Ratha Yatra festival, and the group of Brahmins start singing His  Praises, among the ocean of Devotees surrounding the Ratha; in every step of this great Yatra, His ears are open and his Compassionate Heartthrobs with the Devotees , He who is an ocean of compassion and friend of the whole World; The whole World is like the son of that ocean.

May Jagannath Swami be the core of my vision!

During the Ratha Yatra, Jagannath is Patitapabana that may be translated as ‘the redeemer of the fallen’. On the Ratha, He makes himself easily viewed, accessible and compassionately blesses all who get an audience of Him. The connection here is of the God with his devotee without any prejudice whatsoever.

Puri is also called the Purushottama Shetra as it belongs to Purushottama. The word is formed by the conjoined words ‘Purush’ meaning Self and ‘Uttama’ meaning Supreme. Combined together the word translates to ‘the supreme self ’, embodying the perception of Divinity as disseminated by the Bhagavad Gita. Jagannath changes for the common man and manifests as a commoner’s Divine while mingling with them during His annual journey.

As Purushottama he transcends the barrier of gender. Close observation of His idol lacks any specific gender indication thus barring Him from falling into any gender envelope. He is above the gender segregation.  He is the Brahma, the ever-living soul who discriminates between none.

The above lines mean: ‘Neither woman is He, nor man; neither is he sexless; but whatsoever body He takes, that confines & preserves Him.’

The fifteen-day Anabasara hiatus of the Triad ends with the Netro Utsava . The Naba Jaubana Vesha initiates the subsequent cycle of engagement of the Triad with their devotees. The Lord decides to go and meet his devotee instead of them coming to call on him. This engagement of touring on the Ratha has the quintessential elements of the entire Jagannath Culture.  Agile, fit and full of life, the Lord of the Universe, Jagannath along with his siblings undertake their annual sojourn to the Gundicha temple in the world-famous Ratha Yatra. Also known as Ghosho Yatra or Shri Gundicha Yatra, this chariot journey of the Divine Trinity is majestic and magnanimous. Such is the gathering of His devotees that the entire 3 Km path from the Srimandira to the Shri Gundicha temple is inundated with a sea of worshippers.

Jagat or the universe is all-inclusive. It signifies totality and stands for the entire tangible and intangible Universe as it may be understood by human awareness. Jagat-Natha is the existence of the Divine accepting the entire world as His own. Thus Jagannatha engages the tribal Shavara as his custodian and the aristocratic king Gajapati Maharaja in sweeping the chariot before His Ratha starts rolling. This establishes the importance of respecting each individual and the work he performs irrespective of his social status. 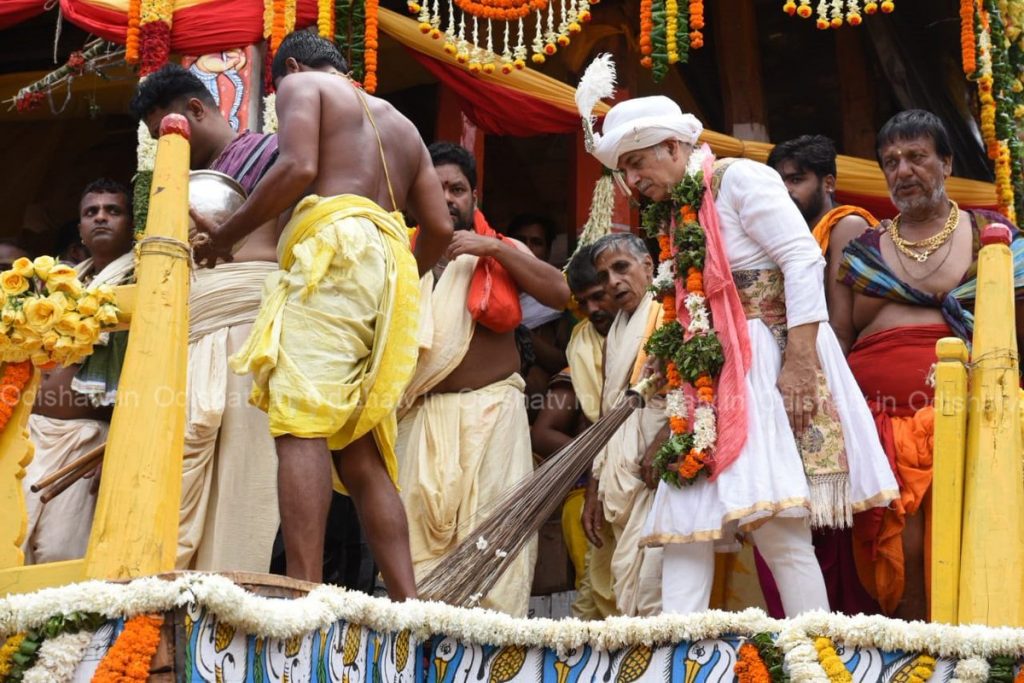 He is the amalgamation of both spiritual and material, bountifully circulating the experience of the physical, metaphysical, and abstract all at the same time. He is a seeker and a giver. He is Krishna; He is Rudra; He is Brahma; He is Kali, He is Daya, He Is Kshama, He is Sat-Chitta-Anand, the existence of ‘Truth-Consciousness and Bliss’. He is the essence of universalism, humanism, and integration.

Note – This year the annual Jagannath Ratha Yatra falls on 23rd June 2020. Due to the COVID-19 pandemic, the rituals of the Ratha Yatra have been made to suit, as per the orders of the Honourable Apex Court of India. The Ratha Yatra will be conducted only in the Moola Peeta of Shri Jagannath at Puri Dham without the participation of devotees.