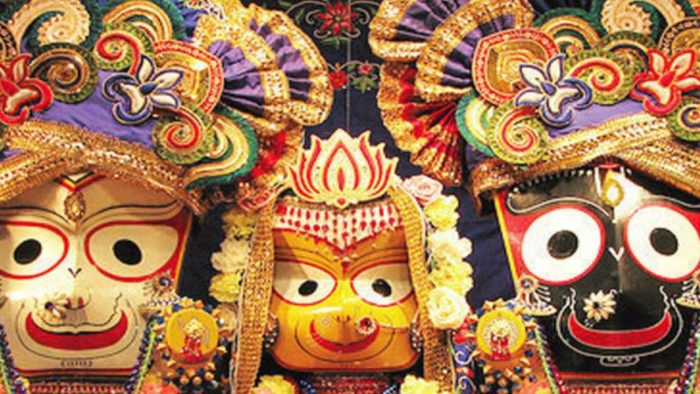 Jagannath culture is ancient but its uniqueness lies in the various rituals and aspects that logically relate to the present context and times. As per Hindu scriptures, Lord Jagannath, an incarnation of Lord Vishnu is considered as the Divine who lives the life of a human. Jagannath is considered the living God. Not much is indicated in history as to when and in which form the worship of Shri Jagannath started in Puri. There are  some indications of His worship at Puri in religious Hindu texts like the Vedas, Ramayana, Puranas, Mahabharata; giving indications of the presence of such a God in the Eastern shores of India.

A couplet in the Rig Veda has the earliest reference of the Shri Jagannath at Puri. It reads,

The famous commentator of the 14th century, Shankaracharya has interpreted the above verse as follows – “There exists on the sea shore, in a far off place, the image of  a Deity, by the name of Puroshottam, which is made of wood, floating as it were in the sea. By worshipping that wood, attain the supreme place of the Vaishnava Loka.” This is an indication that Jagannath is as old as Indian culture.

Lock-Down, quarantine or isolation are the words that are of utmost importance post the sprouting of the Novel Covid-19 viral pandemic. The Corona-19 virus has caused a long period of home quarantine for the first time to the human population globally in the present living times, but the quarantine of Lord Jagannath is an annual affair that has been a ritualistic preservation and continues to be accomplished in the Jagannath cult since centuries.  Lord Jagannath and his siblings Lord Balabhadra and Devi Subhadra maintain an annual quarantine of fourteen days in order to recover from viral cold, cough before the annual Chariot festival or the Ratha Yatra of the Gods. This annual quarantine, popularly known as the ‘Anasara’ translates to isolation.

It is believed that Lord Jagannath falls ill after bathing with 108 pitchers of sweet-smelling water on the humid day of the bathing festival popularly known as Snana Purnima , that falls in the Hindu month of Jyeshtha .  After the elaborate bathing session of Lord Balabhadra, Devi Subhadra and Lord Jagannath, all three are attacked by cold viruses that further cause fever and the three are thus quarantined for fourteen days in the sick bay that is called the ‘ Anasara Ghara’ or the isolation home.  During these fourteen days the Gods are treated with herbal concoctions as mentioned in Ayurveda. The Rajavaidya or the Royal Physician takes care of the medicinal requirements during the isolation period of the Trio. Ayurvedic medicines made by combining ten herbal ingredients that includes Belacheli, Gambahri, Pateli, Fanafana, Aagabathu, Krusnaparni, Shalaparni, Ankranty, Pateli and Labingkoli are mixed in proportions and administered to the Gods. The food offered during this period is simple and includes fruits and thick sherbet locally known as pona. The regular Chappan Bhog that is offered on daily basis is stalled on these days of quarantine. An oil , the phuluri  primarily made from essential oils derived from flowers such as Ketaki, Malli, Bakula , Champa, Kia; Khas Root, Sesame Oil, Sandalwood Powder, Camphor, Rice Grains and other ingredients is applied to the idols. Post fourteen days of dedicated treatment and restrictions the Divine Trinity recover and get ready for their annual journey to the Shri Gundicha temple. The recovery is followed by the grand Ratha Yatra of Lord Balabhadra, Devi Subhadra and Lord Jagannath.

Post the outbreak of the Corona pandemic; the people of Odisha were reminded about the Divine quarantine of Lord Jagannath and his siblings to ensure the successful implementation of the national lock down in order to prevent the spread of the deadly Covid-19. The ritual that has been continuing since the bygone era was accepted without any opposition. It has played a vital role in developing a sense of responsibility in the rural and urban population of Odisha and has successfully promoted social distancing. The Jagannath temple of Puri is also under lock down almost after 328 years. According to the Jagannath temple chronicle ‘The Madala Panji’  Aurungzeb’s associate Akram Khan attacked Puri in 1692 to destroy the Jagannath temple and conquer the three idols of Lord Jagannath , Lord Balabhadra and Devi Subhadra. The threat then was Aurungzeb’s intention of invasion over the temple.

Another annual ritual that the Puri Jagannath temple follows is the ‘Badi Narasingha Yatra’. Badi Narasingha, is worshipped as the defender against various epidemics and ailments. As per Hindu scriptures Lord Narasingha is an incarnation of Narayana having a lion head and human body. It is believed that although the appearance of Lord Narasingha is ferocious but in the core his mercy and love for his devotees was inevitable. According to scriptures on  Jagannath culture, once when devotees were affected by diseases and were in an epidemic like situation, they prayed to Lord Jagannath for his help and grace. The Lord came out of the temple into the city a saviour in the form of Badi Narasingha, to cure his devotees. ‘Badi’ in Oriya means disease.  The Badi Narashinha tour is an annual affair that is undertaken on the fourth day of the Hindu month of Chaitra. The planquine of Badi Narasingha travels to the monasteries of Rishi Markand, Angira, Bhrugu and Kandu Puri located in the four corners of the city. This year under the Covid -19 scare Badi Narasinhga came out of the Shri Jagannath temple in a palanquin and moved around Puri. It was a Divine assurance that God has his blessings on his people and the hard time would pass.

The year 2020 has been a witness to an invisible invasion by Covid -19 virus that transmits through touch. An unknown and invisible enemy that has the entire globe in its grip. The remoteness of God from human and human from God is a spiritual assessment in the present life threatening emergency situation. God is omnipresent, omnipotent and omniscient thus the distance between the Divine and the human can be curtailed by emotional and spiritual indulgence. Faith is the strength and hope still remains. Let Jagannath Swami be the purpose of my vision.