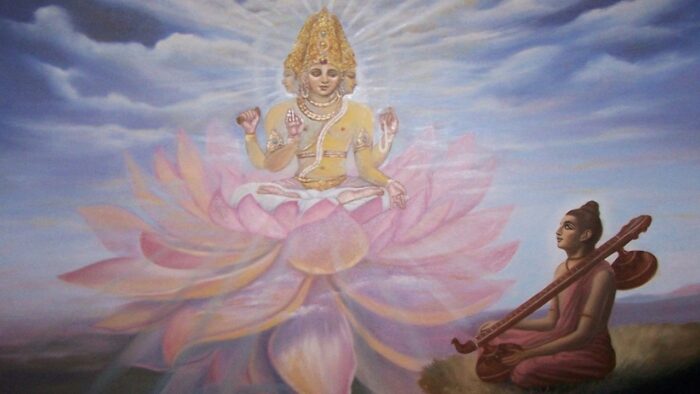 Every morning, with this shloka from Sri Venkatesha Suprabhatam, I awaken Sri Radha-Krishna from their nightly slumber. After reciting this shloka, I remove the blanket from Their bed, offer abhishekham, change their clothes, dab sandalwood paste on Their foreheads, and then worship Them on Their throne with aarti, stotras and other offerings. This is how we start the day, and it is the sweetest experience of my daily sadhana.

Perhaps that is why this is my favorite Ekadasi. For, on this day, Sri Vishna and the other devas who have been sleeping during the Chaturmasya period, from the Shayana Ekadasi during Ashada (July – August) to today, Karthik Shukla Ekadasi. Chaturmasya is a time for retreat and austerity. Sadhakas will renounce certain foods or other indulgences during this period and sadhus will not travel. During Chaturmasya, certain rites are not performed, such as marriage, grha pravesha (the puja performed upon inhabiting a new house), etc. With the ending of Chaturmasya, the time has come for the devas to awaken once more.

In the Skanda Purana, Brahma has a dialogue with Narada Muni, his son, on the glories of Utthana Ekadasi, which is also known as Haribodhini Ekadasi, Papaharini Ekadasi, and Prabhodini Ekadasi. Narada Muni asked his father to describe the relative merits of observing the Ekadasi fast completely (i.e., no eating from sunrise to sunrise), eating only once during the evening on Ekadasi (abstaining from grains and beans), or eating only once during the midday (again, abstaining from grains and beans).

Brahma further explained that the merit earned by one who bathes in a teertha (sacred site), offers dana, chants the divine names of Bhagavan, and performs yajna on this Ekadasi will become imperishable. Janardana is so pleased by one who fasts on this Ekadasi that He will personally take the devotee who observes it back to His abode, illuminating the ten universal directions on the journey. It is said that whoever desires beauty and happiness should observe this Ekadasi vrata, particularly if it falls on a Dwadasi.

On this day, Brahma goes on to explain, one should not eat in another’s house or eat food cooked by a non-devotee. Or else the merit of the vrata is reduced to that of the Purnima vrata. Discussion of the shastras, particularly those dealing with Bhagavan’s qualities and leela, is particularly endearing to Sri Vishnu during the month of Karthik. In this sacred month, one should dedicate as much time and energy as possible, especially when fasting, to remembrance of Bhagavan and the stories of His leela. It is also advised to offer daily a ghee lamp to Sri Vishnu or Srimati Tulsidevi in a temple or at home.

The significance of offering a lamp during this month is illustrated by the famous story from the Padma Purana. There was a temple dedicated to Sri Vishnu where a mouse lived off eating the ghee from the extinguished lamps which had been offered by others to Him. One day, she tried to eat the ghee from a lamp which had not yet been extinguished since she was so hungry. The cotton wick got stuck in her teeth. The mouse started jumping in front of the vigraha and died due to the fire in the wick. But Vishnu in His infinite kindness accepted that jumping around by the mouse with a lit ghee wick in her mouth as arati offered to Him, and she attained liberation.

To observe Ekadasi, one should rise during Brahma-Muhurat (the period between ninety and fifty minutes before sunrise), clean his or her teeth, bathe, listen to Bhagavat katha (or read about Bhagavan), and then pray to Sri Krishna, stating – ‘I shall fast on this day, which is so dear to You, and tomorrow I shall honor Your sacred prasadam. You are my only shelter. Kindly protect me.’

These are some of the specific offerings that are particularly pleasing to Sri Krishna during this period.

This is an Ekadasi celebrated with great festivity. A ratha-yatra takes place on this day to take Sri Vishnu on an excursion after His long nap, as described in the Padma Purana. In some areas, the image of Sri Vishnu is covered with a big brass plate to represent that He is sleeping. Bhajans are sung, where the devotees ask him to wake up and bless them. Children light torches and make a lot of noise to rouse the devas from their slumber.