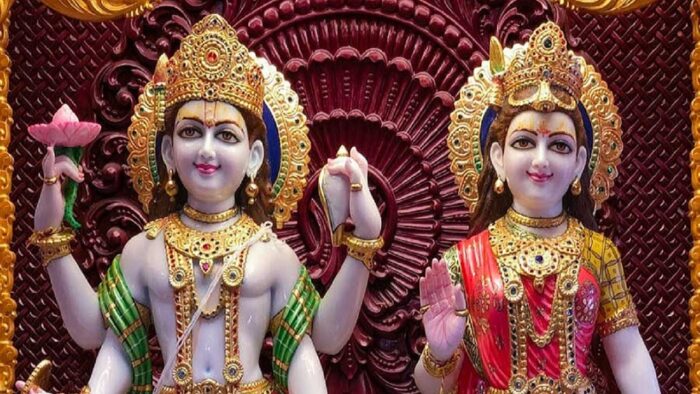 Today is Ramaa Ekadasi, the Ekadasi that occurs during the Krishna paksha (waning phase of the lunar cycle) of Kartika masa.

There is an interesting story in connection with this Ekadasi. Once, there was a valorous king by the name Muchakunda. He had good relations with Indra, Yamaraja, Varuna, and Vibhishana, Ravana’s brother. He was always truthful and constantly worshiped Hari. Because he was a dharmic ruler, there were no troubles in his kingdom.

King Muchakunda had a daughter named Chandrabhaaga. She was married to Shobhana. One day, the couple went to visit the king during Ekadasi. Chndrabhaaga was worried, because Shobhana did not have a strong physical constitution and she feared he would not be able to fast all day. She told him that her father was very strict about observing Ekadasi. On Dasami, he would beat a kettle drum and announce that nobody should eat the next day on the sacred day of Hari. Not even the elephants or horses in the kingdom would eat Ekadasi. They would not even be given water.

Shobhana asked his wife how he could preserve his life and yet respect the king’s strictness. Chandrabhaaga advised him that if he needed to eat, he should leave the palace.

Shobhana decided to fast for Ekadasi, saying, “Whatever my fate is, it will surely come to pass.” With that sense of resignation, he fasted and stayed awake the whole night. All the devotees in the kingdom happily stayed awake all through the night. But it was unbearable for Prince Shobhana, who suffered from excessive hunger and thirst.

When the morning of Dwadasi, the day after Ekadasi, arrived, Prince Shobhana had died. The king ordered a large stack of wood to be assembled for his son-in-law’s funeral pyre. Chandrabhaaga then lived in her father’s house.

In narrating this story to Yudhisthira, Sri Krishna explained that even though Shobhana died because of observing Ramaa Ekadasi, the merit that he had accrued enabled him to become the ruler of a kingdom in Mandarchala Mountain. That kingdom was lustrous and full of jewels, with pillars made of rubies. King Shobhana presided over a throne beneath a white canopy as servants fanned him with yak-tail whisks. Even the Gandharvas and Asparas served him. He ruled like a second Indra.

One day, Somasharma, a brahmana who lived in King Muchakunda’s kingdom, traveled through King Shobhana’s palace while traveling on tirtha yatra (pilgrimage). He recognized the king immediately as the son-in-law of King Muchakunda. Shobhana welcomed Somasharma and asked after his wellbeing and the wellbeing of his father-in-law, his wife and the citizens of his old city. Somasharma reported that all was well, but he could not conceal his astonishment at finding Shobhana ruling such a beautiful kingdom, the likes of which none had ever seen.

King Shobhana explained that because he had observed Ramaa Ekadasi, he had won this splendid city to rule. But he knew it was only temporary, because even though he had fasted on that Ekadasi he had done so without faith or sincerity. He begged the brahmana to go back to his wife and explain the situation so that she could help make the kingdom permanent.

The brahmana went back to Chandrabhaaga and reported, “O Princess, I have seen your late husband in that wonderful kingdom, which resembles the realm of Swarga. But your former husband has asked me to relay to you that his kingdom is unstable and could vanish at any moment. He hopes you can find a way to make it permanent.”

Chandrabhaaga immediately asked to be taken to her husband. She vowed to make his kingdom permanent and stable with the merit she had acquired by fasting on every Ekadasi throughout her entire life. She asked the brahmana for his help, saying that the one who reunites separated individuals obtains great merit.

On the way to Mount Mandarchala, Somasharma, the brahmana, and Chandrabhaaga visited the ashram of Vamadeva. Vamadeva listened to their story, then chanted Vedic hymns and sprinkled sanctified water upon Chandrabhaaga.

Her body became purified by those rites and the merit she had accrued by fasting on every Ekadasi. When Shobhana saw his wife, he was overwhelmed with joy. He seated her on his left side. She told him that since she was eight years old, she had fasted with full faith on every Ekadasi and if she transferred to him the merit that she had accumulated his kingdom would become permanent and its prosperity grow.

Shobhana indeed found that his kingdom in Mount Mandarchala was able to fulfill all of his desires and bestow an incessant flow of happiness, like the Kamadhenu cow.

From this story, we can gather a few key principles. First, when we observe a vrata or a practice mechanically, certain phala or merits will come of that observance even if done without perfect faith or sincerity. But it will not have the full power as that sadhana which is done with full shraddha, as the prince’s wife had done. Her tapobala was so strong because of this regular observance of the vrata done with sincerity and the proper intent, such that she was able to transfer the merits of that practice to her husband. It is also important to note that the prince, Shobhana, had a choice – given his physical condition, as suggested by his wife, it would have been appropriate for him to leave the city and not observe the Ekadasi vrata. But he had resolved to do so, even at the cost of his life.