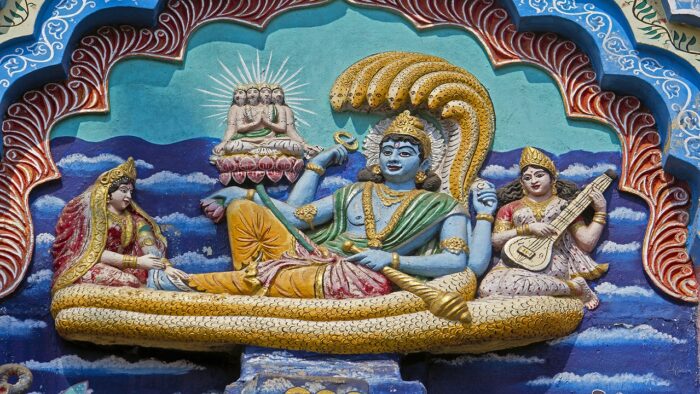 The Ekadasi that falls during the krishna paksha (dark fortnight) of the month of Phalguna (February-March) is celebrated as Vijaya Ekadasi. Sri Krishna once explained the glories of this particular Ekadasi to Yudhishthira.

Once, Narada Muni asked Brahma about this special day. Brahma told Narada Muni that this oldest of fasting days is pure and nullifies all sins. As indicated by its name, observing the Ekadasivrata on this day bestows victory upon the observer. The occasion is further sweetened through association with the story of Sri Rama; this particular story regarding Vijaya Ekadasi from the Padma Purana.

After Sita Devi had been kidnapped by the rakshasa Ravana, Sri Rama had become bewildered in his distress over losing his beloved wife. After Sri Hanuman had come back from Lanka, where he had been able to see and talk to Sita Devi, Sri Rama resolved to journey to Lanka to defeat Ravana and bring Sita Devi back home.

When Sri Rama, Lakshmana, and the army of vanarasand bears reached the seashore, Sri Rama saw that the water was full of danger, teeming with sharks and other predators. He grew anxious, wondering how they would cross that vast, unfathomably deep ocean presided over by Varuna Deva.

Sri Rama turned to Lakshmana, his younger brother, and asked him, “How can we earn enough punya, spiritual merit, in order to cross this ocean? I see no easy path forward.”

Lakshmana suggested that they visit Bakadalbhya, a wondrous rishi with a fascinating history. Bakadalbhya is mentioned in the Vedas, including in the Chadogya Upanishad. He is also featured in various passages in the Mahabharata and some of the Puranas. There are parallels in his life story to the lore associated with Markandeya Rishi.

In the Padma Purana, Bakadalbhya is depicted as a great rishi who lives on an island by himself, who is very aged and wise. Sri Rama agreed to follow Lakshmana’s advice, and the two brothers proceeded to the ashrama of that great sage.

Bakadalbhya was delighted to see Sri Rama, who he immediately recognized as an avatara of Vishnu. He asked why they had come to his humble abode.

Sri Rama replied, “O great, twice-born brahmana, I have come the shore of the ocean with my phalanx of monkey and bear warriors in order to cross the sea and conquer Lanka while defeating Ravana. O, greatest of sages, please be merciful and tell me how I can cross this vast ocean.”

Bakadalbhya promised to tell them of the most exalted of fasts, observing which Ravana would surely be conquered. He instructed them to, on the day before Ekadasi, arrange for a kalasha of gold, silver, or copper, or ifall of those metals were unavailable, clay. Then the kalasha was to be decorated with mango leaves and placed on the mandapa (altar) upon a mound of seven grains. The kalash was further to be decorated with flowers and sandalwood paste. Worship of the kalasha was to take place the night before Ekadasi, and then worshiped with a vigraha of Sri Narayana, after bathing in the morning of Ekadasi. In the morning of Dwadasi, the kalasha was to be worshiped once more and offered to a pure-hearted brahmana. The rishi instructed that if Sri Rama and Lakshmana, along with the commanders of their forces, observed Vijaya Ekadasi in that way, then they would attain victory in every way possible.

Sri Rama did just as Bakadalbhya Muni instructed and thus the war was won through the merits of observing the Vijaya Ekadasivrata. It is said that anyone who observes the Vijaya Ekadasi in this way will always be victorious.

Sri Krishna concludes, “O, Yudhishthira, anyone who reads or hears this story will attain the same great merit as that which is earned by performing a horse sacrifice.”