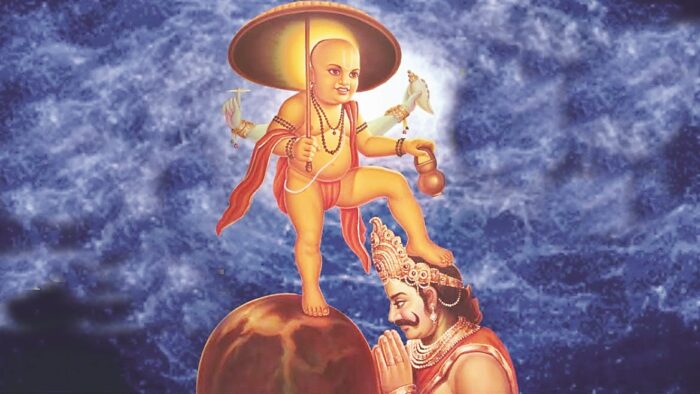 In the shukla paksha fortnight of Bhadrapada Masa (month), the ‘light’ phase of the lunar cycle going from Amavasya to Purnima, occurs Parsva Parivartini Ekadasi. This day is often referred to as Vamana Ekadasi as it coincides with the appearance day of Vamana deva, the fifth avatara of Vishnu. It is therefore also known as Jayanti Ekadasi.

The observance of the Ekadasi vrata on this day is equal in merit to performing the Ashvamedha yajna. On this day, one should worship Bhagavan Vishnu in the form of Vamanadeva, the dwarf form of Narayana who in three steps took possession of all the worlds.

The other significant aspect of this day is that this is the time when Bhagavan Vishnu turns over on his side, from the right side to the left side, marking the halfway point in his four-month sleep. On Sayana Ekadasi, which occurred during the shukla paksha of Ashadha Masa, in June-July, Bhagavan Vishnu and the other devas go to sleep. Thus begins the four-month period of Chaturmasya, when the devas are asleep, which ends with Utthana Ekadasi in Kartika masa (October-November).

No major new rites are performed during this period, such as the vivaha samskara (marriage), since the devas cannot be invited to attend as they are napping. Traditionally, sadhus and sannyasins stay in one place throughout this period, which coincides with the monsoon season.

While rites and ceremonies are restricted during this period, this is a highly conducive time for sadhana. As Sri Krishna explains to Yudhishthira in the Brahmavaivarta Purana, a person accumulates great merit during Chaturmasya if he or she observes the traditions. it is a time to reinvest in studying Dharma and observing austerities and vratas to purify one’s internal system and go deeper into sadhana, dhyana and adhyatma. Because sannyasins also are in residence in one place only during this four-month period, it is an opportunity to learn at their feet in one place for an extended period of time and engage in satsanga. Often, sadhus will take advantage of this period to deliver talks on Dharma.

It is believed that by observing this Ekadasi, a devotee will be granted forgiveness for all of his or her misdeeds. One can ask if that is the case then why is it not enough to observe one Ekadasi once in our lives. The issue is that we have insufficient shraddha or conviction in the words of the shastras and the acharyas, so we do not really believe it will work for us. Therefore, we have to do a lot of things many times for the effects to start to show. Also, as someone pithily said, dipping in the Ganga will certainly remove all of our paapa (demerits) but as soon as we come out of the river, we pick them all up again!

In other words, it is not enough to just observe the vrata. Certainly, if one has shraddha, the karmic slate will be wiped clean and there will be a burst of positive vrttis and auspiciousness. But on the next day and the day after, we have to build upon that foundation and further deepen our practices. Deepening our antahkarna shuddhi (internal purity) is a process of constant cultivation. Vratas like Ekadasi are turbo charges that jumpstart our spiritual engines, but we have to keep putting in the fuel of daily anushthana (sustained discipline of spiritual practice) to continue our progress.

There is a sweetness to thinking of the devas sleeping, of Narayana turning on his side during his sleep. It is these leelas, this bhava, that strengthens our bond with the devas. These motifs are highly conducive to meditation and upasana. One can contemplate the beauty of Narayana reclining on the glittering serpentine bed provided by Anantashesha in the midst of the milky white ocean, breathing softly as he sleeps. With a sigh, perhaps, his sleep is momentarily broken, and he turns to the other side to resume his sleep once more. Contemplating this imagery can lead to a state of deep absorption in a state of bhava, if one is a devotee, or upasana, if one is more antiseptically inclined. These motifs have deep subtle significance from the perspective of metaphysics and dhyana and can attune us to the cycles of nature and put us in greater harmony with the Rtam, the cosmic order.