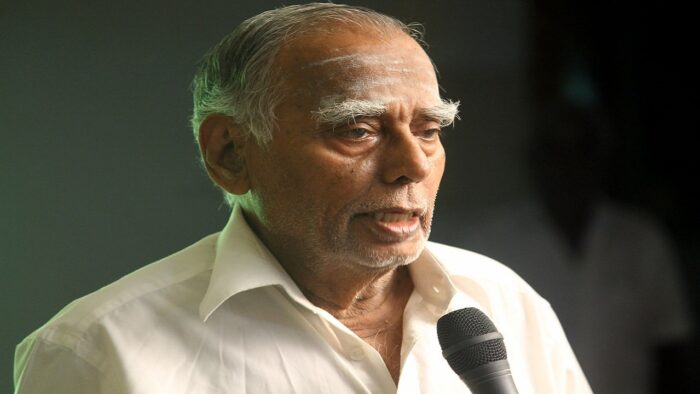 Dr. Nagaswamy, an eminent epigraphist, archaeologist and a scholar in Tamil & Sanskrit attained sadgati on 23rd January 2022 at the age of 92. He was a multifaceted personality with his expertise spanning across epigraphy, temple architecture, Tamil & Sanskrit literature, iconography, agamas, bronzes, numismatics.

Born in Kodumudi, near Erode, Nagaswamy graduated in MA – Sanskrit from University of Madras. He was awarded a Ph.D. in Indian Arts by Pune University. Then he got trained in Archaeology & started working with the Department of Archaeology in Tamil Nadu. He was the first Director of the Tamil Nadu Archaeology Department, which he served for 22 years. This period saw a great change in the Tamil historical studies with new archaeological discoveries, renovation of many monuments and deciphering of numerous inscriptions.

His deep knowledge on Tamil & Sanskrit helped in reading & documenting many inscriptions which are bi-lingual in nature. He was instrumental in naming the Tamil-Brahmi script as ‘Tamizhi’, quoting ancient texts. He has done extensive research in the Pillayarpatti Rock cut temple and proved that it was built by Pandyas. Due to his efforts, one of the oldest inscriptions in that temple was deciphered which has conclusively proved the antiquity of Ganapathi worship in Tamil Nadu. He had written more than 50 books across epigraphy, archaeology & history covering such instances which are a treasure trove for the students of history.

Dr. Nagaswamy was of the strong opinion that both Tamil and Sanskrit thrived in Tamil Nadu since ancient times and both benefited from each other. A scholar in Sangam Tamil literature, he was quite certain that right from the Sangam period, the Tamil land followed Vedic traditions. His articles serve testimony to this fact. He compares Bharata Muni’s Natya sastra with the verses in Silappadhikaram and proved that the Tamil epic draws largely from the Natya Sastra.  Similar was his views on the Vedic traditions followed by Sangam Tamil society.

“From the very beginning of historical times, Tamilnadu was the land of Vedic traditions in every field of life. The Vedic concepts, gods, customs and manners ruled Tamil life : be it the kings, merchants, cultivators, brahmins, hunters, hill tribes, fishermen, chiefs and soldiers, cowherds, artists, musicians, dancers. They followed the Vedic ideology, worshipped Vedic Gods and propitiated their ancestors are shown abundantly in the data available”.  (From Tamil Nadu, Land of Vedas)

His two books “Tamil Nadu, the Land of Vedas” and “Mirror of Tamil and Sanskrit” dwell on this subject deeply.

An expert in Chola bronzes, he was instrumental in identifying and bringing back many idols which were stolen from various temples and showcased in foreign museums. Notable among them is the Pathur Nataraja idol which was brought back to TN after 20 years of trial. Dr. Nagaswamy represented the Indian Government in that case. He had to show proofs from Iconography, History, comparison with other bronzes, traditions etc. to prove his case but the court remained unconvinced. Adding to the difficulty was the soil test done at the place from which the idol was unearthed & sold. The soil was not matching with that on the idol.  Here, Nagaswamy’s knowledge across the spectrum came in handy. He testified that according to agamas it was a practice to bury the idols during extremities like floods, foreign invasions, wars etc. While doing so, it was mentioned in the scriptures that the idols need to be buried with river sand. Hence the soil taken out from the pit won’t match with that in the idols, he said. The court then asked for the evidence for this & he could produce the Agamic document. This has eventually won the case for India resulting in the Idol coming back to the temple.

He stood out as one who doesn’t compromise his core values. He boldly challenged the false narratives which tried to portray Tamils as separate, delinking them from the Indic culture. He had earned few enemies due to his straightforward position on history and not mixing that with the belief system. Nagaswamy didn’t hesitate to question the powers which tried to change the Agamic rituals in the temples in the name of rationality. For him Dharma is foremost of the priorities while conducting the affairs of the temple. However, he had ensured that his personal faith didn’t interfere with his profession as he had unearthed many inscriptions & artefacts belonging to different faiths in TN, from many Jain & Buddhist sites and presented them as they are.

He had strongly argued against the false theories put forward by western Indologists, specifically against ‘no horse in Harappa’. With specific factual references, Nagaswamy clearly demolished such arguments with precision and proved again that when it comes to history, it was facts which stand out against agenda driven biased narratives.

Even at an old age, Nagaswamy was quite enthusiastic in spreading the knowledge he had in various fields. He was an ardent devotee of Kanchi Mahaswami & said that it was Mahaswami who directed him to share the knowledge with as many as possible. He was always ready to speak on any historical topic on any forum and share his valuable wisdom & never hesitates to spend time with students of history.

The Indian history world will definitely miss Dr. Nagaswamy who led a life with a mission and stamped his mark in multiple aspects of History & Epigraphy.