Charter Of Hindu Demands For Parity 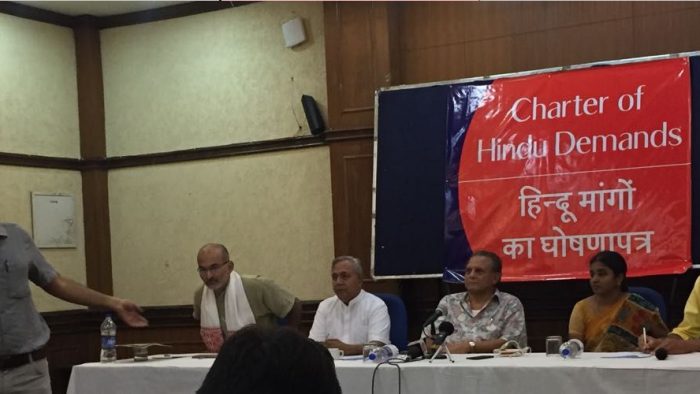 A group of around one hundred Hindus, including spiritual leaders, academics, authors, doctors, engineers, journalists, public intellectuals and concerned citizens from all walks of life, across the country, deeply disturbed by the systemic and institutionalized discrimination against  the Hindu society, gathered in New Delhi on 22nd of September, 2018 to deliberate on various constitutional, legal and public policy issues affecting the Hindu society.

During the deliberations, it was acknowledged that as the inheritor, custodian and trustee of the Indic civilization based on the ethos of Sanatana Dharma, the Indian State has bounden civilizational responsibility to protect, preserve and promote the Indic civilization.
A Charter of key Hindu Demands was debated and drafted, to be presented to the Government of India and the public. The Charter demands:

1. End of legal and institutionalised discrimination against Hindus by the Indian State, which is against the spirit of the equality of citizens irrespective of religious identity. To this effect, the group demands that Dr Satyapal Singh’s Private Member’s Bill No. 226 of 2016 pending in Lok Sabha for amending Articles 26 to 30 of the Constitution should be passed forthwith in the forthcoming Parliament Session, to ensure equal rights to Hindus on par with others in the matters of:

The group recalled that the late Syed Shahabuddin, having understood the problem of the constitutionally imposed disabilities on majority Hindus, had introduced a Private Member’s Bill No. 36 of 1995 in Lok Sabha to widen the scope of Article 30 of the Constitution by suitable amendment to include all communities and sections of citizens by substituting the word ‘minorities’ with “all sections of citizens” therein.

2. A large amount of money comes to Indian entities from abroad, a lot of which is from institutions with ties to foreign governments and their agencies. This money often drives the vested interests of these agencies in India and often ends up subverting Indian society and fueling conflict and separatism. The following official data indicates that irrespective of political color of the Central Govt and despite best efforts of the present Central Govt to tighten and enforce the law, the quantum of foreign contributions continues to rise leading to ever increasing undue foreign interference in our internal affairs.

We rightly refuses foreign aid even in natural disasters not only on grounds of national pride but also because we are capable of generating enough money internally. As there is no free lunch and India is not a beggar Nation, the group urges the Central Government to completely ban all sorts of foreign contributions except those by OCIs in their personal capacity (in recognition of their emotional connect with India) by repealing the existing FCRA and enacting a new Foreign Contributions (Prohibition) Act immediately.

3. In order to protect and preserve the Hindu native cultural and religious traditions, practices and symbols from unwarranted interference not only by the State and its agencies but also from others, the group urges enactment of Freedom of Religion Act by the Central Government immediately

4. In order to prevent repeat of genocidal religious persecution as suffered by the Kashmiri Hindus, the group demands immediate:

5. With about 14 lakh tons of meat/beef exported during 2017-18, India has achieved the shameful distinction of the largest meat/beef exporter in the world, quite contrary to Article 48 of the Constitution. This has not only skyrocketed the prices of meat/beef but has also led to growth of meat/beef mafia. The group urges immediate complete ban on export of all types of meat/beef to lower its prices by increasing its availability in domestic market while reducing the adverse impact on the environment and eliminating social friction and law & order issues.

6. Thousands of temples and sacred places of Hindus are in desecrated, destroyed or ruinous condition. Further, Veda Pathasalas, traditional and folk art forms, literature, dance, music, painting, sculpture, architecture etc which are our intangible heritage and the vehicles for sustenance and transmission of Sanatana Dharma and our age old culture, are all dying for want of patronage and regular livelihood for their practitioners. Therefore, the group while reminding the Indian State of its civilisational responsibility, urges the Central Govt to immediately establish a Central Public Sector Undertaking to be styled as Haindava Samskruti Jeernoddhaarana Nigam (Hindu Culture Restoration Corporation) with an initial seed capital of not less than Rs. 10,000 crores and an annual grant of similar amount for undertaking reconstruction and restoration of all damaged, desecrated, abandoned and dilapidated Hindu temples and sacred places; revival, nurturing, patronising and promotion of Veda Pathasalas, various traditional and folk art forms, dance, music, sculpture, architecture, painting etc.

7. Expediency in granting refuge and citizenship to peoples of Indic faiths fleeing religious  persecution  from  any  country.  The  Central  Govt introduced in Lok Sabha a Bill in 2016 to amend the Citizenship Act, which having been referred to a Select Committee, is pending. The Bill in its current  form  suffers  certain  difficulties  including  its  doubtful  constitutional validity. There are also some genuine concerns expressed by certain people of North Eastern States which needs to be addressed. The group therefore urges the Central Govt for immediate:

8. The creation of an equal opportunity environment for all Indian languages, ending the institutionalized discrimination that exists today. This will fuel both an economic and cultural renaissance, since a large part of India’s population is currently excluded from development and justice due to linguistic discrimination by the State.

The Charter as drafted by prominent citizens of India, will include specific demands and policy suggestions to assist the Government and the legislature in ensuring the rights of 800 million Hindus on par with other sections are upheld,   as the principles of equality, justice and liberty are essential for the health and vitality of our cherished democracy and for enabling growth of a truly secular and religion-neutral legal, governance and public policy regime and polity as envisaged by Dr. Ambedkar and other founding fathers of our Constitution.

The Press panel was open to questions by the representatives of media. The Panel clearly mentioned that the charter did not contain anything that tramples on the existing rights and privileges of the so called minorities in India. They stressed on the fact that the charter essentially contains points of discrimination against the Hindu majority and as rightful citizens of this country, Hindu majority need not be discriminated against institutionally and systematically.

The Press panel was open to questions by the representatives of media. The Panel clearly mentioned that the charter did not contain anything that tramples on the existing rights and privileges of the so called minorities in India. They stressed on the fact that the charter essentially contains points of discrimination against the Hindu majority and as rightful citizens of this country, Hindu majority need not be discriminated against institutionally and systematically.

Some press members were eager to know if this charter was a political step in any way to assist Modi government or RSS. The panel mentioned that this initiative had nothing to do with politics or Modi government or RSS. They said this was the right time to ensure these demands come up and ultimately they wish to meet Modi ji with these demands so that justice for majority is also ensured on specified 8 points.

The Press asked for clarity on the charter’s asking for enacting prohibition on foreign contribution to India, to which the Panel stated that they have no problems if the financial contributions actually helped the poor and affected citizens of the country, but that a research indicates that large amounts of money seems to be going towards judicial activism, filing of PILs, and agitations against national development projects which may lead to threats to national security.

On question of what parity is needed in Hindu run educational institutions, the panel gave the example of Ramakrishna Mission. who because of constant interference in its management, finally resorted to fighting for a minority tag for exemptions, which was ultimately turned down by Supreme Court. The panel also mentioned that the minority run institutions, in spite of being funded from government; do not have any quota reserved for economically backward children unlike Hindu run institutions. 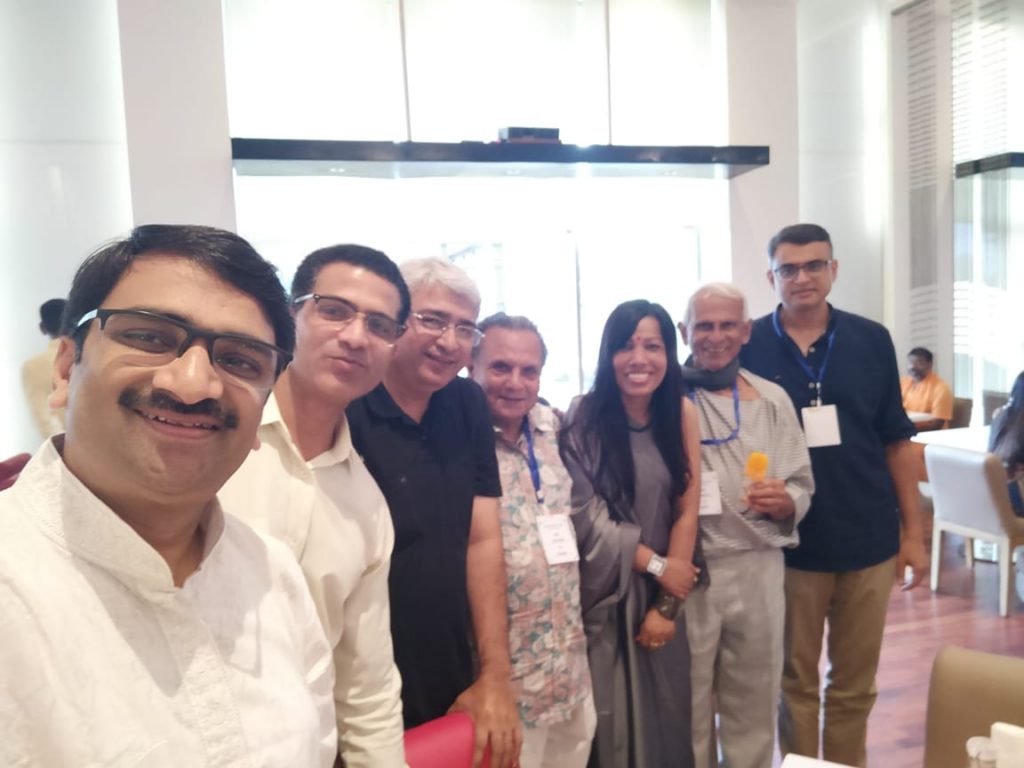