Bhagavad Gita as a Smriti with Qualities of Shruti 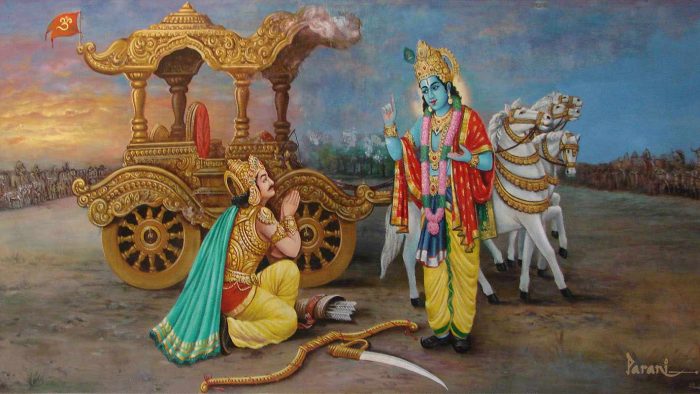 Bhagavad Gita or the Song of the Lord, is the very word (shabda) of the Lord; and hence, should logically be considered as a shruti. It is further reinforced by the fact that Gita extensively deals with the subject of attaining Atma-Jnana and Moksha. Even, Adi Shankaracharya himself calls Gita-Shastra as “the very essence of all Vedas” in the introduction to his commentary on the text.

Yet, not only Shankaracharya, but all successive acharyas belonging to different traditions of Vedanta Darshana have considered Gita as the “Smriti Prasthana”, the canonical smriti text, which is considered as the pramana- valid source of Knowledge, in the Vedanta Darshana.

I have always wondered why the tradition has classified Gita, which has all the qualities to be classified as a shruti and which is indeed treated on par with the Upanishads, as was evident from Shankaracharya’s description above, as a smriti, a recollected scripture?

One widely prevalent explanation is that since, Gita is part of Mahabharata, which is an itihasa and hence comes under the broad definition of smriti, it cannot be considered as a shruti. There is merit in this explanation. After all, it was Veda Vyasa, not Krishna, who wrote Mahabharata and hence, though Krishna imparted directly to Arjuna from a Yogic state, it was recollected and reproduced by Veda Vyasa in Mahabharata. Yet, this cannot be the sole reason for such a classification. There must be more to this classification than what appears on the surface.

Let us first look into what we know about how Lord Krishna imparted these teachings and see if there are any pointers that could help in classification. In Anu Gita, Krishna says he was “concentrated in Yoga”, while he revealed the Bhagavad Gita and hence, he was unable to recollect them in entirety at a later time. Though the usage of the term “connected in Yoga” seems to point towards Gita revelation to be of the same category as shruti, in Bhagavad Gita (4.1) itself, Krishna also says that he had imparted the same teachings about the imperishable Yoga at an earlier time, in one of his earlier lives, to Vivasvan, the Surya Devata. Thus, is it possible, that Shri Krishna had recollected that knowledge from earlier life through Yoga and imparted them to Arjuna and hence, Gita is considered a smriti?

We will never know, since, it is equally possible that Krishna, who was ever established in the imperishable Self, had only allowed this eternal Knowledge to be revealed through Yoga. After all, Krishna himself says in verse 4.6 that though he is birthless, through his own Maya, he has taken the avatara. Hence, there is an ambiguity regarding the manner of revealing of Bhagavad Gita and it would be of no help to us in determining whether Gita should be classified as shruti or as smriti.

That leaves us with only one place to look: The motive, content, and the manner of presentation of Bhagavad Gita. Consider this, Gita was delivered on the battleground, just moments before the gory war was to take place and not in the serene forest hermitage of a sannyasi. Just before the battle, Arjuna developed an emotional crisis, a dilemma whether to fight and kill his own kith, kin, and teachers, or to renounce war and retire to forest. Arjuna was confused regarding what his righteous duty was, what would be the right course of action. Thus, Krishna imparted Gita to inspire Arjuna to take up his Gandiva and perform his svadharma-righteous duty.

In other words, the motive behind Gita was to inspire Arjuna, and to all its readers and listeners to perform their svadharma. Hence, the famous verse “स्वधर्मे निधनं श्रेयः” (Death is better while engaged in one’s Dharma). Therefore, as far as the motive is concerned, Gita is a dharmashastra, which teaches one to pursue one’s svadharma.

Now, let us come to the contents and the presentation of Gita. Yoga, Jnana, Bhakti, and Moksha are all important elements of Gita; the reason why it was perhaps considered as the essence of the Vedas. But this in itself does not make Gita a shruti. In fact, most dharmashastras, including famous smritis like Manusmriti or Apastamba Dharmasutra have sections on Jnana and Moksha.

But, it must be conceded that among all the smritis and dharmashastras, it is Bhagavad Gita alone, which has so extensively dealt with these subjects. Yet, Gita in its presentation of these very topics resembles a smriti. While shruti imparts both the path of action and the path of renunciation, its teachings are more generalized. It provides a broad framework. It is in the smritis that we encounter more elaboration on the tenets of the shruti and their contextualization according to time, place, and competency of people.

Bhagavad Gita does just that. It imparts knowledge about different paths suitable for people with different competencies and in different situations. It tends to give a tailor-made path, catering to mundane and spiritual needs of all people. Hence, everyone will find something that appeals to them, something which resonates within them deeply. And not to forget that, despite speaking about Moksha, Gita again and again reminds people to do their svadharma. Therefore, Bhagavad Gita clearly fits into the category of a dharmashastra from its content and its presentation.

It is perhaps considering all these reasons: motive, content, and presentation, that our revered acharyas must have classified Bhagavad Gita as a “Smriti Prasthana”, despite it being imparted by Lord Krishna himself and having many qualities of shruti.

(The article was originally published on indiafacts.org)