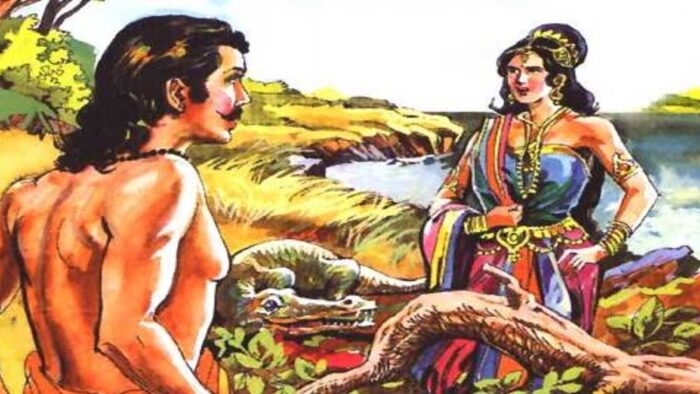 The beauty of the Apsara is mysterious, motivating, and confining. These celestial nymphs have the magical tact of confining common sense and also affirming the fact that all that is intriguing might be as intimidating.

These beautiful damsels of Devraj Indra, wonderfully capture the senses of the most dedicated and controlled men, causing consequences beyond repair. At times these celestial beauties were put on task by Devendra to safeguard His superiority.

At times the Apsaras got attracted towards the mortals causing them deep regret. Created by Brahma and nurtured by Indra, the Apsaras of the Hindu Puranas are enigmas with Divine dignity and enthralling magnetism. These Apsaras have been an essential ensemble of many Puranic legends.

Apsara Vargā was one such celestial beauty who had been cursed to live like a crocodile until she and her companions were released from it after a century. The enchantress lived for hundreds of years and was finally liberated from her cursed crocodile form to her celestial self by the brave and courageous Pandav, Gandivadhari Arjun.

The liberation of Apsara Vargā

The  Adi Parva of the Mahabharata is dedicated to the forest exile of the Pandavas. The  ‘Arjunavanavas Parva’ describes many adventures undertaken by the warrior prince Arjun. The story of Apsara Vargā and Arjuna also has a mention in the ‘Arjunavanavas parv’ of the Mahabharata.  Arjuna had liberated the Pancha Tirthas -five sacred waters from the infestation of mighty crocodiles.

The five sacred water bodies by the name Agastya, Saubhadra, Pauloma, Bharadwaja  Karandhama were once used by ascetics for rituals and sacred duties but with time the water bodies had been rejected and stood silent.

The reason for shunning these five water bodies was because these were inhabited by five colossal crocodiles that would drag anyone entering the water.

Meaning: There dwell in these waters five large crocodiles which take away the ascetics that may happen to bathe in them. It is for this, O son of Kuru’s race, that these waters are shunned.

Frightened by the wrath of these predator reptiles, the saints and sages had left entering these sacred water bodies. Hearing about the crocodiles from the sages, Arjuna decides to take a plunge into the Saubhadra,  one of the five water bodies.

The moment Arjuna enters the water of Saubhadra, the mighty crocodile grabs Arjuna’s legs in its jaws and seizes him. But Arjuna fights back and drags the crocodile to the shores of Saubhadra.

Meaning: Dragged by the renowned Arjuna to the land, that crocodile transformed into a beautiful damsel bedecked with ornaments.

Upon reaching the shore Arjuna finds the crocodile transforming itself into a beautiful damsel. Arjuna is astonished seeing the happy and beautiful damsel,  decked with ornaments and accessories.

Out of curiosity, Arjuna enquires about her and she informs that she was an Apsara and her name was Vargā.

Meaning:  Arjuna enquired Who the beautiful one was? Why had she been in the waters? Why also did she commit such a dreadful sin to be converted to a crocodile?

The damsel replied, saying, ‘I am, O mighty-armed one, an Apsara that sported in the celestial woods. I am O mighty one, Vargā by name.

Vargā narrated to Arjuna the incident that had turned her and her celestial mates from beautiful Apsaras to crocodiles. Once she and her celestial friends- Saurabheyi, Samichi, Vudvuda, and Lata were traveling to Kubera’s palace when they came across an extremely handsome Brahmana engaged in the pious recitation of the Vedas.

They were passing by the forest but on seeing the Brahmana deeply engrossed in meditation they couldn’t leave the place.  The Bramhana was radiant, composed, and dedicated to doing his task. His handsome persona and ascetic splendor captivated Apsara Vargā and her friends. They felt the desire to befriend him.

In order to draw his attention, Apsara Vargā and her celestial companions started to distract the Brahmana. They started singing and dancing around the place of his meditation. The Brahmana was irritated by their deeds and looked at them annoyingly.

Out of rage, he cursed them to live as crocodiles for a hundred years.  The curse was the least they had expected from the Brahmana. The five of them begged for an apology but the curse couldn’t be taken back.

Upon many pleadings by the five Apsaras, the curse was modified and the Brahmana confirmed that they would be liberated by a brave man. This man of utmost courage and gallantry would drag them from water to the land after a hundred years. Upon reaching land they would resume their real appearance and be liberated from the curse.

While moving towards the lakes to take refuge, the Apsaras saw Dev Rishi Narada and narrated their plight to him. He suggested that they proceed towards the coast of the southern ocean.

Meaning: On the banks of the southern ocean, all adorned with the ascetics residing there. And there lay scattered five such regions where also dwelt many ascetics.

He recommended that there they could dwell in the five Jala Tirthas -holy baths known by the names as Agastya, Saubhadra, Pauloma, Kārandhama, and Suprasanna.

Meaning: Those sacred waters were called Agastya, and Saubhadra and Pauloma of great holiness, and Karandhama of great propitiousness yielding the fruits of a horse-sacrifice unto those that bathed there

Narad muni suggested that Apsara Vargā and each one of her companions inhabit these lakes and live there as crocodiles. He further added that at the time of liberation, post hundred years Pandu Putra Arjuna, would come and redeem them from the curse.

Abiding to Narad munis’ instructions, all the five celestial nymphs lived in the Panch-tirtha-the five holy baths for hundred years as crocodiles until Arjuna liberated them from the curse.

Meaning: All those sacred waters within which you have your places as crocodiles; after you, all attain your original Apsara form, will become known all over the world by the name of Nari-tirthas. These five sacred waters will be connected with the sufferings and the deliverance of women. All such women upon visiting the five Nari Tirthas shall become sacred and cleansed of their sins in the eyes of the virtuous and the wise.

After Apsara Vargā and her other celestial mates got liberated from the water of the Pancha tirtha, these sacred bodies of water came to be known as Nari Tirtha, each dedicated to women. These five tirthas towards the South of India are of supreme importance to the followers of Sanatan Dharma. It is believed that any sin committed by a woman is rinsed after taking a dip in the Nari Tirthas. These Nari-Tirthas are regarded as a means in helping Hindu women to attain sanctity and further help them in achieving moksha.

Apsara Vargā remains a reminder that the consequences of beauty can at times gather the ugliest penalty. Managing the opulence of beauty wisely and carefully is an art of sensible humility.