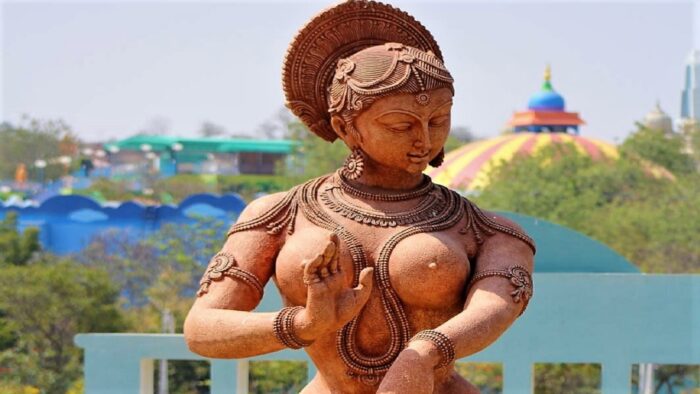 The charisma of Apsarās in the Puranic manuscripts gives insights into various aspects of human nature. The Apsarās were indeed beautiful charmers of Amaravati but were also wrath attractors for the deeds they executed on the instructions of their possessor – Devendra. The association of the celestial Apsarās with annoyance and appeasement has nurtured the fertility of Puranic scriptures positively with many messages. These Puranic narrations have added meaning and transformed the image of the Apsarās from being mere celestial beings of attraction to messengers of good sense who have fruitfully enhanced viewpoints on various aspects of life and living. Puranic literature describes Apsarā Rambhā falling to curses of Maharishi Viśvāmitra and Indra and then in due course of time attaining liberation from the same thus confirming the recurring progression of time and deeds.

Apsarā Rambhā on the command of Dev Raj Indra performed the task of disturbing the penance of Rishi Viśvāmitra. Upon realising the intent of Apsarā Rambhā, Rishi Viśvāmitra cursed the celestial damsel to remain a rock until freed from it by a pious Brahmin.

Rishi Viśvāmitra uttered the following words confirming Apsarā Rambhā’s liberation from the curse of being a stone.

Meaning– A highly resplendent Brahman who is ascetically powerful redeems you, oh, Rambhā, who is now blemished by my anger.

Apsarā Raṃbhā remained in her rock like state at the hermitage after being cursed by Rishi Viśvāmitra. Rishi Agastya’s disciple named Śveta, performed penance in the same hermitage for a long time. Once a notorious demoness, named Aṅgārakā, attacked his hermitage with an intention to devastate the hermitage and disturb Rishi Śveta’s deep penance. Demoness Aṅgārakā ruined the hermitage with dirt, garbage and harassed Rishi Śveta with nuisance. Furious with the activities of demoness Aṅgārakā, Rishi Śveta decided to go on war with her. He fixed the same rock to his launch weapon, which as a result of Viśvāmitra’s curse had earlier transformed Apsarā Rambhā into a stone. Guided by Vayu – the Wind-God, Rishi Śveta launched the stone on a missile and aimed it towards demoness Aṅgārakā. Seeing the missile moving in her direction, demoness Aṅgārakā fled to the shore of the southern sea. The rock fitted to the missile chased the demoness. The demoness jumped into a water body popular by the name Kapitīrtha and drowned in it. The missile followed the demoness and the stone fixed on to it fell on Angarika’s head leaving her dead.

The death of demoness Aṅgārakā resulted as a life giving event for Apsarā Raṃbhā. Soon Apsarā Raṃbhā, was liberated from the curse of Rishi Viśvāmitra. She transformed from her lifeless stone like form to her previous radiant celestial self at Kapitīrtha. Demoness Aṅgārakā, who harassed Rishi Śveta was Apsarā Ghṛtācī. Due to the effect of a curse Apsarā Ghṛtācī had had turned into a demoness. By falling into the waters of Kapitīrtha, she too regained her original celestial form and was liberated from the curse.

The creation of Kapitīrtha is rooted in the monkey army of Shri Ramachandra. Post the victory in Lanka and the death of Ravana the monkeys created a pilgrimage where they cheerfully spent time and took their bath. By taking a bath in the pious water, the monkeys could assume any form they desired. The monkeys granted a boon unto the Tirtha, proclaiming that those who would take a holy dip in the Tīrtha would achieve salvation and would be free from the burden of sins committed. The monkeys further added that he who always expressed his wish to visit Kapitīrtha would attain freedom from the fear of death and poverty. The monkeys then asked Shri Ram to bless the Tirtha. Shri Ram blessed the Tirtha and ascertained that those who took their holy bath at Kapitīrtha would attain the merit of a blessed bath equal to that taken in the holy river Gaṅgā and Prayāgaraj Triveni and as well as derive the advantage of all the SanatanTīrthas collectively. Shri Rama blessed Kapitirtha with the worth of the worshipping Brahmā, Viṣṇu, Maheśa and other Devatas.

Indra, the king of the Devas enjoyed his leisure in an utmost exhilarant manner, seated at Nandana Vatika that reverberated with the melody of songs voiced by the Siddhas, Cāraṇas, Gandharvas and Kinnaras. Parrots, cuckoos, ruddy geese and many other birds filled the air with the sweet echo of their twitter and calls. The Apsarās danced to the flow of the enchanting melody flowing ceaselessly. Once Apsarā Rambhā danced for Dev Raj Indra. She was depicting the various Bhavas – emotions through her dance movements and gestures. Suddenly she became unmindful and lost involvement in her dance, thus committing noticeable errors. She could not meet the rhythm and the beats because of her absent minded state. Dev Raj Indra noticed the slips and was furious with her human traits of being inattentive. Shakra cursed Apsarā Rambhā of losing her celestial self and doomed her to lead a lustless life on Earth along with the mortals. Apsarā Rambhā was taken aback by the drastic curse she had attracted from Indra. She lamented for mercy but all in vain.

Seeing her in distress and pain, all the other Apsarās exited Amaravati to be at the side of Apsarā Rambhā on Earth. They were pained to see her pale and ordinary, without the aura of her celestial beauty. They could do nothing but support her in grief.

Rishiraj Narad saw the gathering of sad and sulking celestial damsels sharing the melancholy of Apsarā Rambhā as she cried incessantly. He proceeded towards the gathering of the Apsarās. Upon enquiry he got an account of the incident and the curse Apsarā Rambhā had attracted from Indra. Nārada engrossed himself in meditation and came up with a solution. He guided all the heavenly damsels to the Mahākālavana, where the Shiva Liṅga could grant all that is desired. Convinced by Nārada, the Apsarās proceeded to the beautiful Mahākālavana with an aspiration to appease the Shiva Liṅga there. They prayed to the Liṅga with all sincerity.

Subsequently all the Apsarās including Apsarā Raṃbhā were able to please Lord Shiva with their commitment. Impressed by the devotion of the Apsarās, Lord Shiva granted them boons. Lord Shiva redeemed Apsarā Raṃbhā from the curse of Indra. He granted her the boon to regain her position in Svargalok and directed her to go back to heaven along the other celestial damsels. As the Shiva Linga was appeased by the Apsarās, the Deity came to be well-known as

It is believed that those who sincerely worship the Apsareśvara Shiva Linga successfully fulfill their ambitions and never part from the positions achieved.

The curses woven in the Puranic scripts are reminders that establish the fact that nothing is everlasting. Change is inevitable and has to be faced for the time period ascertained. The test lies in enduring the tough time with faith and hope for a pleasant future. Curses are like teachers who provide moral learnings and also act as caution flags regarding the impact of immoral acts and deeds that can have shattering consequences. The mention of curses vented on Apsarā Rambha might be a mythical reference but the messages conveyed are true to all times.