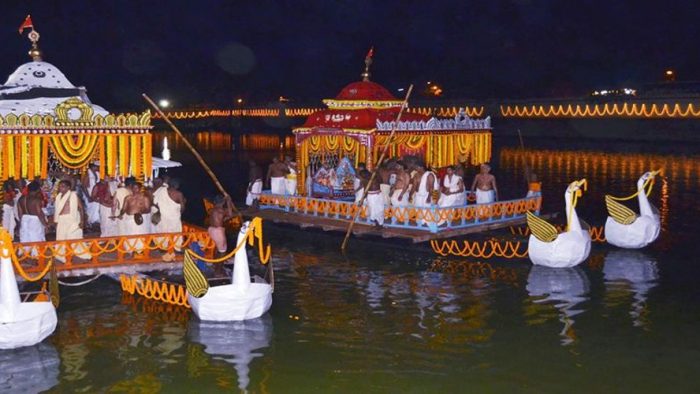 Akshaya Tritiya initiates the beginning of Lord Jagannath’s escape to the cool waters for recreation and is also a curtain raiser to the upcoming Ratha Yatra. The Maha Bisuba Sankranti marked the onset of summer and now with the mercury rising up, Lord Jagannath has rituals that help him to escape from the sultry heat.

An auspicious day in the Hindu calendar, Akshaya Tritiya is ruled by the preserver Vishnu. The day is of utmost importance for Hindus. It is believed that Rishi Vedavyasa started narrating the Mahabharata to Ganesha from this day. Another legend puts forward that River Ganga descended on the Earth on this day. The day is also celebrated as the birth anniversary of the sixth incarnation of Vishnu – Parashurama. As per Vedic scriptures the day also marks the beginning of Treta Yuga.  It is believed that ‘Kubera’ received his position as the God of Wealth on this auspicious day. Surya –the Sun God gifted the Akshaya Patra –The limitless vessel to the Pandavas on this day. The day falls on Shukla Paksha Tritiya in the month of Vaishaka and is auspiciously known as Akshaya Tritiya. The auspiciousness coalition of Mangal(Mars) and Chandra(Moon) on this day is most supportive for creating wealth and promoting a prosperous and happy life. Akshaya in Sanskrit means ‘everlasting or inexhaustible’, hence any desire made on this day attains fulfillment. In Hindu astrology this day is free from any malefic effect and can be used to initiate any auspicious activity. In Odisha the farmers begin their agricultural activities on this day.

Chariots in the making

‘Chandan’ translates to sandalwood and has an important role to play during Chandan Yatra of the Gods. As per legend, Lord Jagannath, is troubled by the rising heat of the summer. In order to keep Him cool and fragrant in the scorching heat of the summer, aromatic sandal paste is applied to Him and His siblings in the Chandana Lagi ritual that starts on Akshaya Tritiya. Madanmohan, the representative idol of Lord Jagannath, His consorts Goddess Bhu Devi and Sridevi as well as the five Shiva Lingas, also known as the Pancha Pandavas, are taken in a procession on palanquins to the Narendra sarovar. Narendra Sarovar is a big pond where the Gods engage in water rides and sports for the coming twenty one days.

“The one who is adorned with sandal paste smeared on his blue body, wearing yellow silk robes and garlands of wild flowers ; He whose ear rings are pearl studded dangling beautifully, whose cheeks have a smile at all times.  Oh Hari! Thy charming wife and others divulge and enjoy in thy pastimes.”

The Gods travel to the Narendra Sarovar every day; they are given ritualistic baths with fragrant water and are then coated with the sandalwood paste. Thereafter Madanmohana, Bhu Devi and Sri Devi are taken onto a beautifully decorated white boat called Baitrika escorted by two big swans and given a ride on the cool waters of the Narendra Sarovar. The Pancha Lingas – Jambeshwara, Lokanatha, Kapal Mochan, Markandeya and Neelakantha along with Rama-Krishna are taken onto a magnificent red boat named Sunanda. The boat rides also known as Chapa Khela are given to the Divine by the Nauka Sevakas of the Gods. After the initial cruising is over the deities get involved in ‘Jalakrida’ or water sports that they enjoy in tubs of sandalwood water. Thereafter, the deities are given a change of clothes and presented with the Sitala Bogo – a naivedyam mainly consisting of fruits. Post the offering of Sitala Bhogo the Gods are decorated in a special ‘Vesha’- Festive wear, assigned for the day. There are twenty one different Veshas prescribed for the twenty one days of Bahara Chandana Yatra with distinct attire and ornaments dedicated specifically for each day. After the Gods are given the day’s Vesha they are offered the Mandua Bhogo, a sweet cake. Post the Mandua Bhogo offering, the Gods are again taken to their respective boats for the ‘Ratri Chapa’- The night cruise. Thereafter the Gods are taken back to the Shri Mandir.  The entire Chapa Krida happens in the evening from around 4 PM to 10 PM. Devotees throng around the Narendra Sarovar and enjoy the sight of Madanmohana, his consorts and the Pancha Lingas cruising. The entire vicinity echoes to the recitation of Jayadev’s ‘Geeta Govinda’ accompanied with the swaying moves of the Odissi Gotipua dancers’; beating of rhythmic gongs, drums and to the shrill melody of conches.

During the Bhitara Chandana Yatra , the Gods do the Jalakrida within the temple on specific days. Bathtubs laced with fragrant sandal paste and camphor infused water are made available for the Gods to indulge, enjoy and escape from the heat . These bathing and sporting sessions of the Gods during the Bhitara Chandana are not made public to the devotees.  Chandana Yatra is the longest festival of Shri Jagannath .

Shri Jagannnath, the Living God is the ‘Param Brahma’ – The absolute Supreme and also the Supreme Being. His way of life is in symbiotic association with the seasonal and amusement requirements of His creation – Humankind. He feels the heat in summer and the chill in winter and has the means to safeguard himself from the scorching heat and to bring warmth in winter. Akshaya Tritiya marks the beginning of many such interesting and unique festive celebrations, undertaken by the Lord bringing Him closer to His devotees.