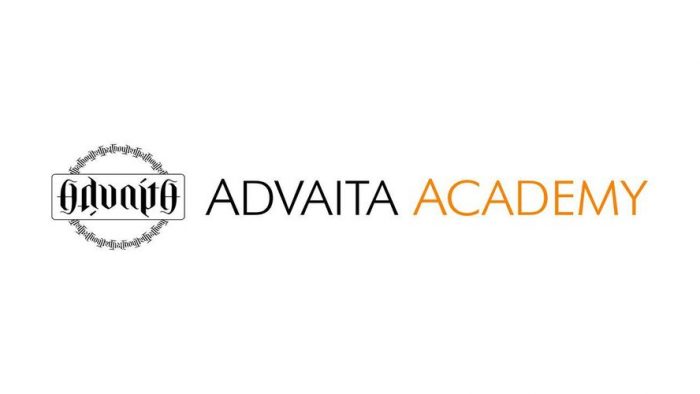 Boldly proclaiming the philosophy of Advaita as the ultimate conclusion of Vedanta, Adi Shankaracharya writes in his Brahmajnanavalimala that “just as the pot, wall, etc., are all nothing but clay; likewise, the entire universe is nothing but Brahman, so roars the Vedanta”.

Vedanta, which is literally the ‘end-part of the Vedas’, is the crown and the zenith of the teachings of the Vedas. It is the ultimate goal of all life, of all paths of philosophy and spirituality. Just as all the rivers, be they originated in the glaciers or are rain-fed ultimately merge into the ocean, so also all spiritual and philosophical paths reach Non-duality at the end. Since, every path ends in non-duality, no path is inferior or superior to the other and Advaita itself has no conflict with any of these paths. Non-duality, in fact, acts as the mother who upholds, protects, and nourishes these diversity of paths of Sanatana Dharma.

It is with this vision that 8 years ago in 2010, during the auspicious festival of Deepavali, Advaita Academy(AA) was founded as an online platform where people across the world can access authentic teachings of Advaita Vedanta made available in the form of video lectures by teachers, who are traditionally trained in the Advaita Vedanta Sampradaya.

Though my own association with AA as its editor is only 18 months old, my pursuit of Advaita Vedanta itself has been a life-long journey and I had immensely benefited from the academy for many years before I became associated with it.

AA has been conceived as an online platform which provides easy and free access to the teachings of Upanishads, Gita, works of Adi Shankaracharya, and other secondary literature of the Advaita tradition in the form of video lectures by teachers of the tradition. AA is a multi-lingual platform with lectures in English, Hindi, Kannada, Telugu, and Tamil. Over the years, we have also focussed on promotion of Sanskrit and towards this end we have published more than 1000 video lectures (by Sri. NCT Acharya and Dr D Narasinga Rao) for facilitating the students to systematically learn the language from the very basics.

Over the last eight years we have extensively covered various Upanishads including, Brihadaranyaka, Ishavasya, Katha, Mundaka, Mandukya, Taittiriya and Prashna; Classical texts like Bhagavad Gita, Ashtavakra Gita, and Valmiki Ramayana; important Vedantic texts like Dakshinamurthystotram and Vivekachudamani of Adi Shankaracharya, Panchadashi of Swami Vidyaranya, and Naishkarmya Siddhi of Sri Sureshwaracharya, to name a few. Apart from this, we have published lectures on miscellaneous themes from Hindu tradition and philosophy.

As of today, we have published more than 6000 video lectures which have gathered around 2.7 million views, 23 million watch time minutes and 22,000 subscribers on YouTube.

In the coming years, we plan to expand our reach further by collaborating with more teachers, producing more authentic lectures, covering a wider landscape of Advaita tradition, and exploring newer opportunities to grow and spread the teachings of Adi Shankaracharya.

Initially set up as independent not for profit, AA is now part of the Center for Spirituality at Indic Academy. This Center is proposing to now set up a Gurukul and launch a 3 year course in Advaita Vedanta. Apart from the online platform and the Gurukul, 108 murthis of Adi Shankara are also proposed to be installed around the world. The first of the murthi is being consecrated in Tamil Nadu in January 2019.

Sharing below the thoughtful musings of some of our teachers on the journey of Advaita Academy:
In the several years of sharing classes as a contributing dharma teacher of the Advaita Academy organization, it has been a privilege to participate and share the incomparable wisdom of Vedanta, Yoga, and other sterling darshanas and noble pathways of Mother India. What I have appreciated the most has been the underlying nondual platform that A.A. has provided for those of us engaged in this active dharmic transmission, which places it very close to my own ideal involving Swami Vivekananda and his very fine interpretation and superlative vision of Advaita Vedanta. Without this nondual thread of combined foundational and transcendental wisdom, the fabric of religion and philosophy would remain unwoven in this day and age, and the seamless element of unblemished, uncompromised Truth could not be revealed to contemporary seekers. Therefore, I offer both my gratitude and my appreciation for what Advaita Academy is striving to accomplish in such a problematic age as this, and proffer my sincere wishes that it will be supported and expanded over the coming years for the highest good of all beings.
– Sri. Babaji Bob Kindler

With the high-speed internets becoming available across the nook and corner of the whole globe, learning using the online courses has become increasingly popular. Advaita Academy had the foresight to start the online Academy for the Vedantic study, with free accessibility to millions of interested students around the world. It provided a tremendous opportunity for those who are really interested to learn, but otherwise cannot afford to have access to the various experts in the field. Recording, webcasting and converting them into you-tube format require significant commitment and effort. Along with it, recording of the many talks on various subjects and texts by many experts, week after week, requires tremendous planning and execution. I was pleasantly surprised when Shree Hari KiranVadlamani requested me to record the series on ‘Introduction to Vedanta’ many years ago. Simultaneously, recording of selected difficult texts by many stalwarts in Advaita Vedanta like Shree Mani DravidShastrigal, etc., provided a significant boost to the Academy standards. Development of online learning courses on Sanskrit also helped in preparing the students to study more advanced texts on Vedanta. Advaita Academy not only provided the necessary recording tools but also the finances to support personnel for the continuous on-going classes on various texts. The best part of the online courses by the Academy is that that one can access the talks any time and any where and study the texts at an individual pace. I am extremely happy to be part of this Academy and recording of the talks are being done in a homely atmosphere while it is becoming made available to every home across the globe. Hari Om!
– Dr. Kuntimaddi Sadananda

Advaita is the most intellectually satisfying system of self-knowledge. It attracts thinking minds from all over the world. Today we are able to disseminate the Advaitic thought through talks, articles, etc. to the global audience thanks to modern technology. Advaita Academy fulfills this role admirably. With a large team of scholars/teachers who are constantly delivering quality material to the seeking section of people, the Academy itself is evolving. The multi-lingual menu with the Academy caters to a wide variety of seekers. To me the Academy is a sort of a mentor as it gives me a chance to constantly improve my knowledge as there is a commitment to deliver the subject in the most appropriate way possible. Through discussion groups, social media windows, etc. the work of the Academy can be even more widely made visible.
– V Subramanian

It is a matter of great pleasure that Advaita Academy has completed eight years — and a matter of greater pleasure that in a short time period, it has gained much popularity. Deservedly so, because it is an excellent platform that gives students and the intellectually curious accessibility to quality lectures on Advaita. What makes it unique is the fact that it enables rigorous study of śāstra-grantha-s — śloka-by-śloka, sūtra-by-sūtra. My hearty congratulations to the team that has created such an excellent platform, and consequently, such an excellent repository of lectures on texts from stalwarts across the country!
– Manjushree Hegde

The Advaita Academy provides a platform for people to come into contact with the spiritual heritage of India. I am a student of Pujya Swami DayanandaSaraswati and it is this teacher who opened the door to the Vedic vision of God as a fact to be appreciated rather than a belief to be held. This Academy has enabled me to make available what I learned from this remarkable teacher. Not only was Swami Dayananda a great teacher of Vedanta he was also an exponent of the psychology that comes from the Gita. He unfolded this psychology in a way that enabled us to see our lives in a clear and undistorted way. He artfully used the Hindu scriptures as a mirror in which to show us the nature of our suffering and the means whereby this suffering could be resolved. And he did this in a way that was most helpful to a Western person like myself. As well as being an outstanding teacher he was also a beautiful human being and therefore the Vedic vision embodied.
– Bede Draper

The Author is editor of Advaita Academy and a student of Vedanta.