A Timeless Testimony to Sri Ram- The Sarayu 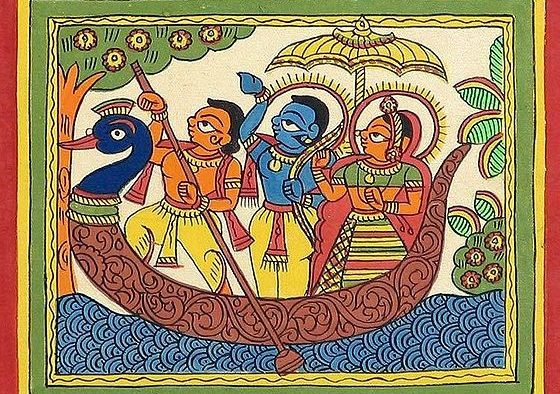 Sri Ram, Sarayu, Ramayana and Ayodhya have been an inevitable part of Hinduism and there are many scriptures that have their mention. Rivers have always been a source of life and significance in Indic culture and mythology. These rivers have flowed without reservation on caste and creed but have remained onlookers of history being created and distorted and again being created. These flowing masses of water have been the gurgling witnesses to the cyclic repetition of evolution and destruction of life and faith. The Sarayu, has seen it all. The creation of a faith in Sri Ram, the scripting of an Epic –The Ramayana, the downfall of Ayodhya and the silence over the validation of the birth place of Sri Ram. The rise of Babar and the faith he brought along with him. The river stands witness to ancient destructions replacing new faiths – A temple replaced by a Mosque and now again it sees the shaping of curtailed improbabilities reaching its ultimate destination .The beginning being restored.

Our Puranas mention the nature, flora and fauna in abundance; rivers have their own importance and contribution. A close look at the Ramayana shows a network of rivers that Sri Ram, Lakshman and Sita came across before the exile and during the fourteen year exile they undertook and also thereafter. The Ramayana has a  mention of rivers’ netted in the Epic,  effortlessly navigating the narrative and the characters through the network of the following rivers- Saryu, Ganga, Bhagirathi, Tamsa, Yamuna, Sayandika In Uttar Pradesh , Mandakini At Chitrakoot, Chamarnavati (Chambal River), Vipasa Vyar , Shatudru , Vitatsa , Sindhu, Betwa, Ken, Reva ,Mahanadi, Son, Kaushiki, Vedshruti, Gomti, Malyavati, Mandakini (In Dandak Van), Godawari, Tungabhadra, Krishna And  Kaveri.

The mention of Ayodhya, the capital of the Kosala kingdom, situated on the banks of river Sarayu and the birth of Sri Ram in Ayodhya evidently conveys that the interlink between Sarayu, Ayodhya and Sri Ram. It also confirms the connection involving the three lies thousands of years beyond the Mughal invasions. Valmiki composed the Adi Kavya, Ramayana in 5th Century BCE. History reveals that the Mughals began to rule parts of India from 1526 and the Mosque on Sri Ram’s birth place was built in between 1528–r 1529 CE .

In the Ramayana, Sarayu stands as a witness to king Dashratha accidentally killing Shravan Kumar thinking him to be an animal , when Shravan is collecting water for his thirsty parents . Shravan Kumar’s aged parents cursed king Dashratha besides the Sarayu river that he too would meet the end of his life grieving for the loss of sons.

Meaning– On the banks of river Sarayu, a great and prosperous country named Kosala, abundant in food grains and wealth and inhabited by contended people, was situated.

River Sarayu stood bystander to the birth of Sri Ram and his brothers to king Dasharath and his queens. Even today on the auspicious day of Sri Ram Navami, the birthday of Shri Ram, thousands of people take a dip in the Sarayu River at Ayodhya.

The Sarayu also remained a witness to Sri Ram’s fourteen-year exile that he started from Ayodhya by crossing the Sarayu and camping on its banks before migrating into the forests beyond the boundaries of Ayodhya.  Sri Ram on the command of Viswamitra gained mystic knowledge from the Guru, by taking Sarayu water in his hands

Meaning: After crossing a distance of over half a yojana on the southern bank of Sarayu, Viswamitra addressed Sri Rama sweet in a gentle voice

Meaning : O child ! Take this water in your hands, let there be no delay. You will receive from me a collection of mantras and also bala -Strong  and atibala- Strongest .

Meaning : Sri Ram, the highly heroic after acquiring knowledge of the sciences and having rendered all services to the preceptor Viswamitra, Sri Ram appeared resplendent like the Sun-god in autumn. There the three of them spent the night comfortably on the bank of Sarayu.

The Sarayu had seen Sri Ram’s transformation from a prince to a nomad. It had witnessed Him acquire the supernatural powers that would help him in the journey that lay ahead.

Post the fourteen-year exile of Sri Ram, Lakshman and Sita, the Sarayu stood an eye witness to welcoming Sri Ram back to Ayodhya and also an observer of His coronation. 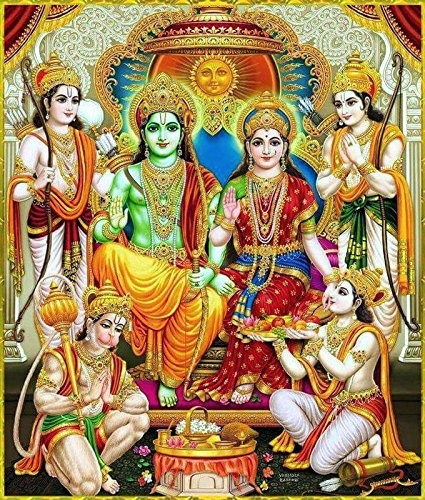 Then comes the time when the human form of Sri Ram had to experience the departure from the cycle of life and move towards death. Lakshman leads the way and drowns himself in the river Sarayu. He reincarnates as Ananta Nag on which Lord Vishnu rests. Sri Ram followed Lakshman, but Hanuman wouldn’t allow Yama, the God of death, to enter Ayodhya to take Sri Ram. To permit Yama’s entry, Shri Ram distracted Hanuman by dropping his ring into a crack in the palace floor and requested Hanuman to fetch it. Hanuman reduced himself to the size of a beetle and entered the crack only to discover that it was the doorway that led to Naag Lok, the land of serpents. Hanuman met Vasuki, the king of serpents there. Vasuki took Hanuman to the centre of Naag Lok where he found a mountain of rings. Hanuman was lost in the heap of rings and every other ring he picked up was similar to Sri Ram’s ring. All the rings were identical. While Hanuman searched for the ring Sri Ram had taken Jal Samadhi in the Sarayu River .Finally the Sarayu became Sri Ram’s route to   Vaikuntha. Sri Ram, the seventh Avatar of Vishnu drowned himself in river Sarayu to return to his eternal Mahavishnu form.

While venturing into Vanavas, Kevat- a ferryman helped Sri Ram, Lakshman and Sita in crossing river Sarayu . The Lord was so overwhelmed by the devotion of the Kevat, that he released the ferryman from the cycle of birth and death granting him Moksha . Sri Ram granted the Kevat Mukti– freedom, but the Sarayu river on which he had travelled remained entangled in the cycle of life. The Sarayu flows ceaselessly since ages. The Sarayu has continued to live and evolve with time and history. It is the only spectator of Sri Ram’s birth and also the cradle of Sri Ram’s death.

Just like the undying spirit of Sri Ram, who had the power to sacrifice, conquer, and accomplish, the river Sarayu is timeless and eternal. With Ayodhya all set for the bhoomi pujan and  Shilanyasof Sri Ram temple,  the Sarayu is yet again a mute testimony to the past being reinstated, the present being reformed and the future being regulated.