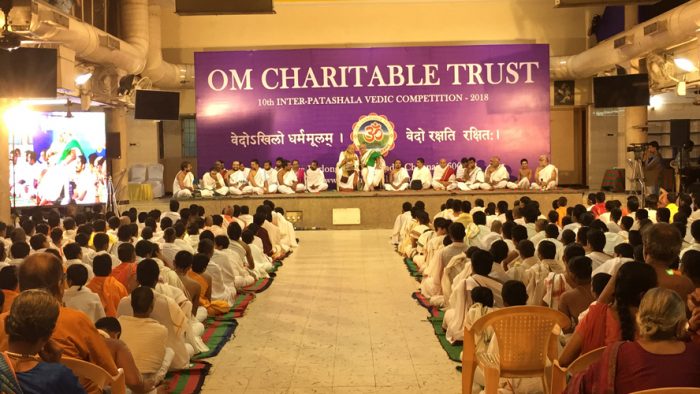 I participated in an oral Vedic Examination at Mysore, in the southern part of Karnataka, when I was a nine-year old kid and a student of Rigveda. I remember I had a fear of failing, a sense of anticipation about the examinations and admiration towards the examiners. Since then I have witnessed many such annual gatherings, where hundreds of Veda Students and Pathashalas participate and are certified for the parts of the Vedic scripture they have memorized. Later I became a teacher and then an examiner. Until now, I had never seen these gatherings as significant for our heritage. It was always either a part of our educational routine or of our workaday lives.

When Indic Today’s editorial team asked me to attend a similar examination to be held at Chennai and write about it, I had the chance to look at it from a different perspective.

While I am familiar with such oral examinations, this particular event urged me to reflect on it in relation to our heritage, as well as our sense of our own heritage.  I was curious to witness the next generation of students. I felt a sense of pride about the fact that, despite all kind of negative news that we hear about the condition of our Samskruti,  kids are still getting into these gurukulas  . A sense of pride comes only when there is a comparison between two or more things.

I arrived at Chennai to witness the 10th All India Annual Vedic Competition organized by Om Charitable Trust. Instead of being a participant, this time around, I was a spectator.

In a traditional marriage hall in Chennai’s T Nagar, teachers from different pathashalas began arriving by the afternoon and gathered around the registration table. Within a few hours the large marriage hall was abuzz with hundreds of children in traditional attire. Om Charitable Trust had arranged another hall for the stay of students who had come from North and North Eastern India. 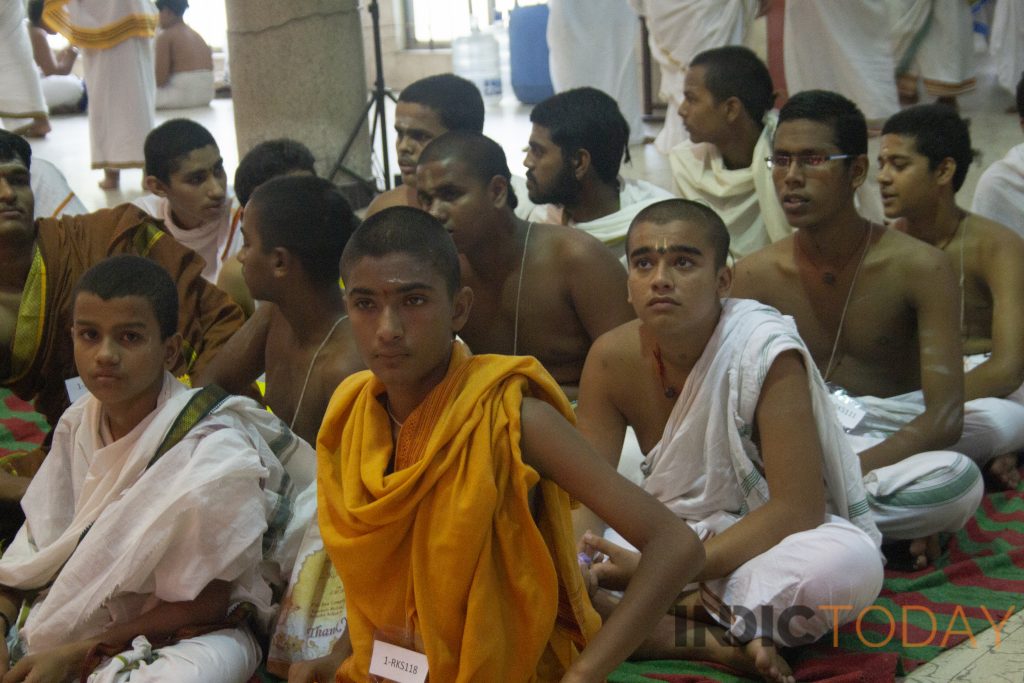 There are more than four thousand Gurukulas, Sanskrit schools and colleges across the country where they teach Sanskrit literature, grammar, Ayurveda, Darshanas and many other disciplines of traditional Indian knowledge. But Om Charitable Trust is focused on those paathashalas and individual scholars who teach the Vedas by the ancient and oral method of accurate memorization. Therefore, only students who have memorized some or all the portions of the Veda were selected for the final competition.

Even though there are more than 4000 Gurukulas in the country, it is ironic that most of them follow an alien method to teach Indian traditional knowledge. Surprisingly, they do not include oral Vedic education, as it is very difficult to get affiliation and funds from universities and educational boards if one is teaching the Vedas in the proper traditional manner. Many individual scholars host students at their homes and teach the Vedas with the support of some donors. These scholars are very reluctant to seek recognition and support from the government because they fear that with academic recognition and funds from a government body will also come the diktats about following the syllabus decided by those not learned in the traditional disciplines.

Therefore there is a great need for private organizations like Om Charitable Trust who support the authentic Vedic tradition without forcing people into compromising with the strictures of tradition. Even though such private trusts do not always provide for funds throughout the year to gurukulas, they encourage students by organizing such competitive examinations. 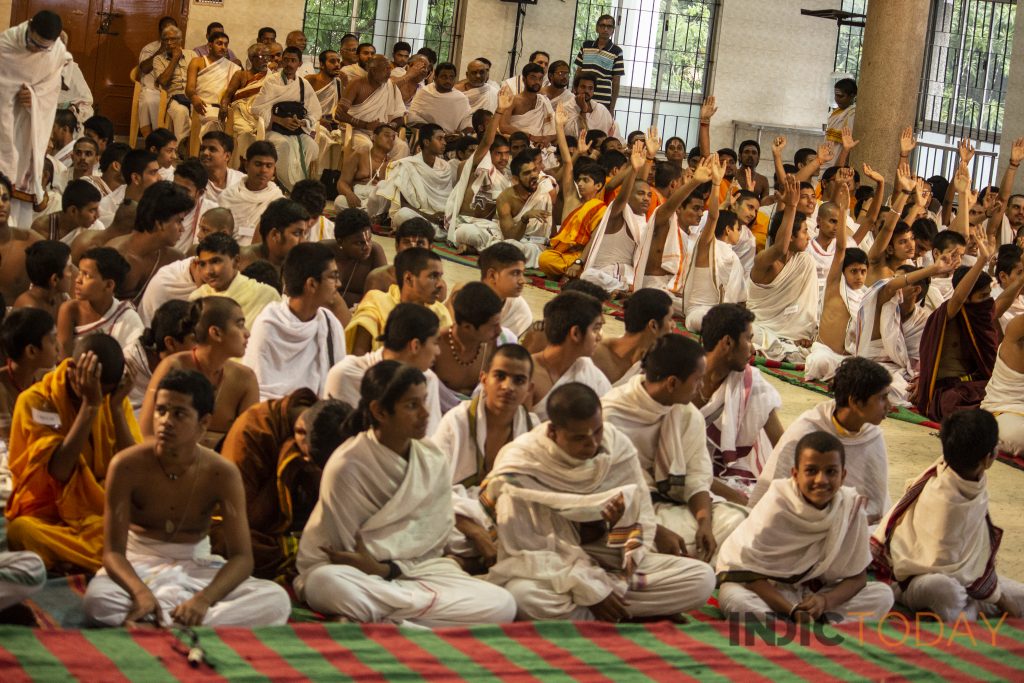 I was not sure about calling it an examination or a competition since there are many organizations such as Veda Shastra Uttejaka Sabha in Pune, Veda Nidhi Trust in Mysore, Veda Rakshana Nidhi Trust in Chennai, Kouta Vaari Sabha in Vijayavada, Rajamhendravaram Veda Sabha, Telangana Veda Pareeksha Sabha and various trusts in several districts of Andhra Pradesh who conduct examinations and certify students studying in that particular district. Apart from these various trusts, many Sampradaya Mathas including Sringeri and Kanchi Kamakoti Peetham conduct annual examinations and provide certificates to students. Among Vedic circles, Rajamahendravaram, Kanchi Peetham and Sringeri Matha certificates are considered as authentic and prestigious than the certificates provided by any government body or Sanskrit Universities. Therefore many Paathashalas in South India do not appoint teachers who hold certificates given by Sanskrit Universities. Many traditional Vedic conference organizers do not invite these government certified scholars. Such is the glory of private and traditional Vedic examinations and there are plenty of them in South India.

There are four trustees in the Om charitable Trust (Sri. Narayanan, Dr. Balaji Srinivasan, Sri. Srinivasa Raghavan and Sri. Kumar) who work under the guidance of Sri. R. K. Krishnamurty Shastrigal, the retired principal of Madras Sanskrit College and a scholar of Yajurveda and three Sastras. These trustees work with the support of about 20 core committee members and more than 50 volunteers and have been organizing this competition since 2009, with its reach expanding every year.

Sayana is calling the Veda as “aloukika”, in contrast to the loukika, or the wordly.  Even in the Gita, Sri Krishna makes a similar distinction by saying “लोके वेदे च ” (Loke Vede cha). Here, Krishna is using the term “loka” in contrast to Veda.  Thus, traditionally Veda is considered to be the aloukika way to fulfill worldly wishes of mankind. Further, the tradition has divided the Veda into three parts as Upasana Kaanda, Karma Kaanda, and Jnana Kaanda.  कांडत्रयात्मको वेदः

Conditioned by the tropes of the Western world, modern academic scholarship looks at the Veda as an ancient literature or as a source of religious and esoteric knowledge. Therefore Vedic studies are seen as a part of the study of civilizations and their mores. From an academic perspective it is part of the study of ancient history. For traditional Vedic practitioners, however, it is still a live and divine entity and they refuse to refer to it in the past tense.

The academic study of Veda has successfully portrayed the Upaasana and Karma Kaanda as irrelevant and focused on the Jnana Kanda only, while the tradition insists on the study of Veda for the sake of upaasana and karma. It is not just a course which one studies to acquire a degree and graduate from a University.

For traditional people Vedic study is a necessary preparation for their daily Upaasana and Karma to be done in the Grihastha life after the marriage. 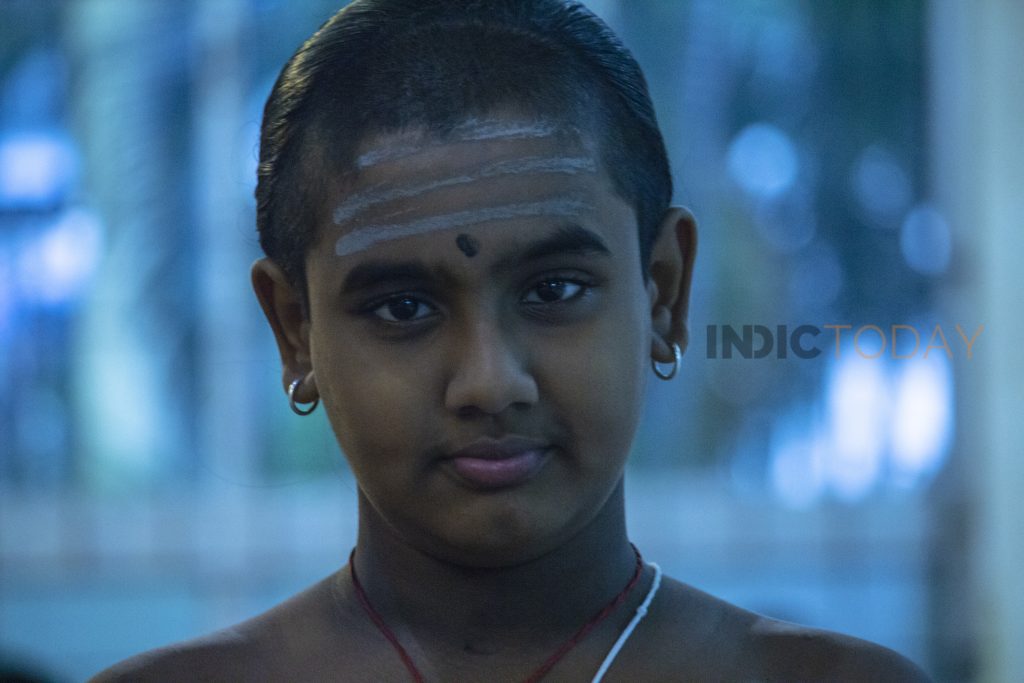 Thus there is a fundamental contradiction in the intention behind the study of the Veda between traditionalists and modern-day academics. While the one studies the Veda to understand the previous generations, the other studies it as a preparation for practices to be undertaken in the future.

Difference between Adhyayana and Study

Patanjali is drawing our attention to three things: (i) he is specifically laying out the duties of a Brahmin and making the distinction between adhyayana (अध्ययन) and knowing. Therefore knowing the meaning of Veda comes after completing the “adhyayana” in the tradition.

The third aspect of the above statement from Patanjali is that, “a Brahmana should do adhyayana”, as is made clear by his use of the word “Brahmanena”. He is not saying that one can become a Brahmin by doing Veda Adhyayana, as social reformers and intellectuals of today say.

Academic Vedic study in Sanskrit universities and other such places is dissimilar to the above-mentioned traditional way of adhyayana, and focused towards knowing the meaning alone. Such modern methods of study treat the Veda as a resource for making claims regarding civilizational identity or use it as a solution to Bhoutika problems. 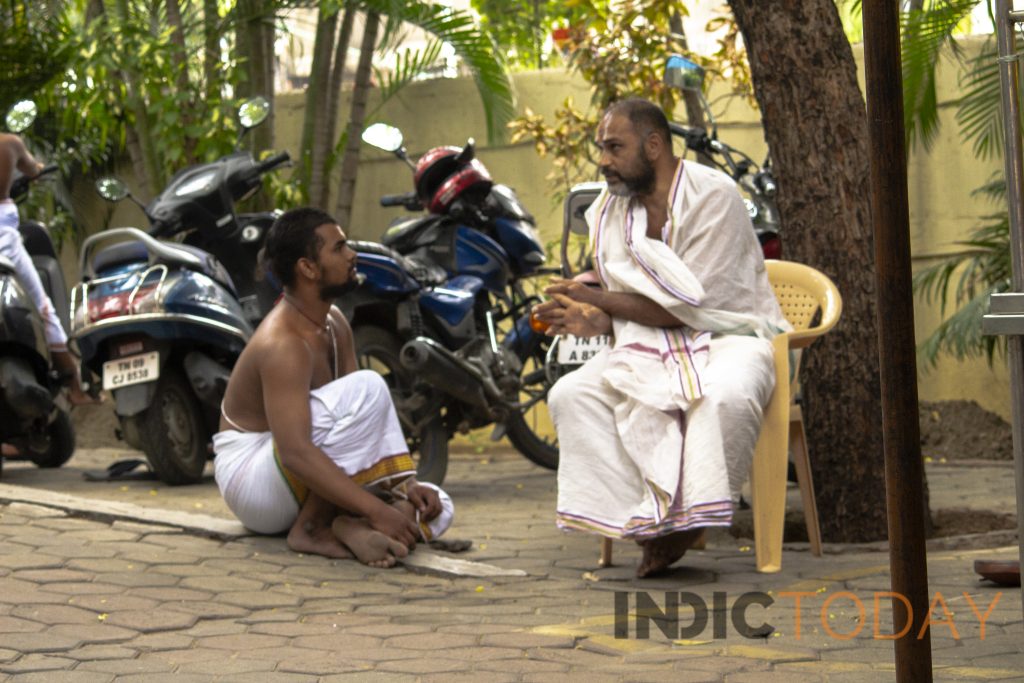 I do not mean to assert that the purpose of Veda is only Adhyatma. The Vedas may provide solutions to worldly problems as well. But the Veda’s way of the solution is the “aloukika way” as Sayanacharya puts it in the abovementioned quote.

We have given up the aloukika approach and we are trying to find solutions to problems in our own loukika way. Therefore we consider the Veda merely as a piece of ancient literature and consequently feel proud about it from the sentiment of heritage conservation. But this sense of heritage is a recent phenomena in comparison with the eternity of Vedic tradition.

Reasons for a distorted view

Veda is essentially to perform yajna. Most often, we have no clue of what yajna is. When someone utters the word “yajna”, some picture of a “havan” comes to our mind without quite appreciating the difference between the two. Secondly we have lost the traditional knowledge and experience of Praana. Indian traditional practices are connected to Yajna and Praana. Unless we clearly understand these two things, it is impossible to understand Indian traditions. We look at Yoga as a healing process or an exercise because we have not been told about Praana in our education. Similarly, we look at our traditional practices as culture, because we have no idea of Yajna and universal consciousness.

As a result of this confusion, we have accepted the western social criticism that Karma Kaanda is a bunch of superstitions and Upaasana is just a way of being religious and orthodox. Hence we are focused more on Jnana Kaanda (or, the Upanishads) of Veda and have completely destroyed the systems of Upaasana and Karma.  We also feel a false sense of superiority about ourselves when we look down upon Karma and Upaasana.

Adhyayana of Veda is essentially for the sake of Upaasana and Karma. If we do not have the intention of performing the two, there would be no need for us to spend years in adhyayana. We might directly jump into studying the translations of Upanishads rather than going through the rigid practices to be along with adhyayana.

The students and scholars who had gathered for the competition in Chennai are doing adhyayana with shraddha instead of mere study. We should appreciate the importance of this point before going further into the details of the event.

Shri Jai Kishan Jhaver, the chief guest for the inaugural portion of the event, presented his viewpoint on several topics with respect to the vidyarthis of Veda pathashalas. Some of his observations were:

Before his inaugural speech, Sri Krishnamurty Shastrigal conducted an oral presentation of Eight Vikriti Pathas for the audience gathered at the auditorium. He picked one mantra from Rigveda Samhita and asked two Ghanapathis (घनपाठी) to recite samhita, Pada and Krama paathas in order. Later they demonstrated Jata, Mala, Shikha, Rekha, Dhvaja, Danda, Ratha and Ghana pathas as well. Sri Krishnamurty Shastriji explained the process and explained what a “Ghanapaathi” means: the one who has done adhyayana of  the complete Veda along with Ghana patha.  People who can recite the Ghana for the complete Veda are called Ghanapathi. If he has studied the Lakshana as well, he is generally referred to as “Salakshana Ghanapaathi”. Samhita is the original text of the Veda. Pada Patha is the word by word division of the same. Krama is combing two words at a time and moving further leaving the previous words behind. These three forms of chanting won’t distort the original sound on forward order of the mantra. Thus they are called “prakriti pathas”.  The remaining eight pathas are designed in a way where it goes forward and in the reverse mode as well. While going in the reverse direction the mantra’s original form of sound and meaning gets distorted. Therefore they are called “ashta-vikriti”.  These vikritis are not useful in any karma or upasana.

(IndicToday had previously made an announcement regarding the 10th All India Annual Vedic Competition organized by Om Charitable Trust, at TNagar, Chennai on 19-22 of July 2018. Here is the first part of the report on the same from Sri Dattaraj Deshpande, who attended the competition on behalf of Indic Academy.)