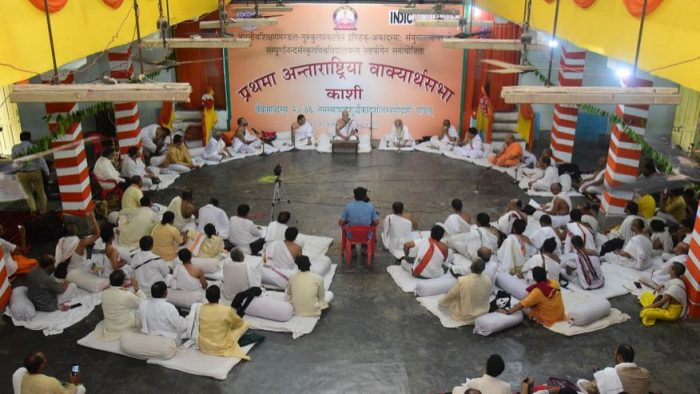 Indic Academy’s Inter-Gurukula University Center for Indic knowledge Systems, in collaboration with the Bharatiya Shikshan Mandal(BSM) and under the auspices of Sampurnanand Sanskrit University organized the first International Vakyartha Sadas during 12th-14th July, 2019 at Varanasi.

It was called the first International Sadas because it was for the first time in the history of Independent India that traditional Shastra scholars from Nepal, Bhutan and Bharat were part of the panel.

Shastrartha and Vakyartha are two different practices in the area of Shastric traditions. Shastrartha is putting forward an argument to prove a point or fact using related scriptural authority. Certain facts get established in Shastrartha from a particular point of view and a person’s training gets proven. In contrary to this, Vakyartha is a dignified and systematic approach to establish the actual meaning of a “Vakya” or sentence in the chosen subject with all possible objections. The Scholar presents both the Poorva Paksha and Uttara Paksha of the topic at hand and establishes Vakyartha with all it’s nuances. This method of presenting the facts in a gathering of scholars not only gives the presenter a deep understanding of his own subject but also deepens the understanding of the questioners along with providing a room for new insights or growth of the subject. Therefore Vakyartha’ is considered to be a facilitator for the evolution of sciences or Shaastra-Vriddhi as called in the tradition.

Hence, Indic Academy and BSM collectively decided to bring back the glorious tradition of Vakyartha in Varanasi by organizing a large scale gathering of Shastra experts who are trained in Gurukuls in the traditional manner. 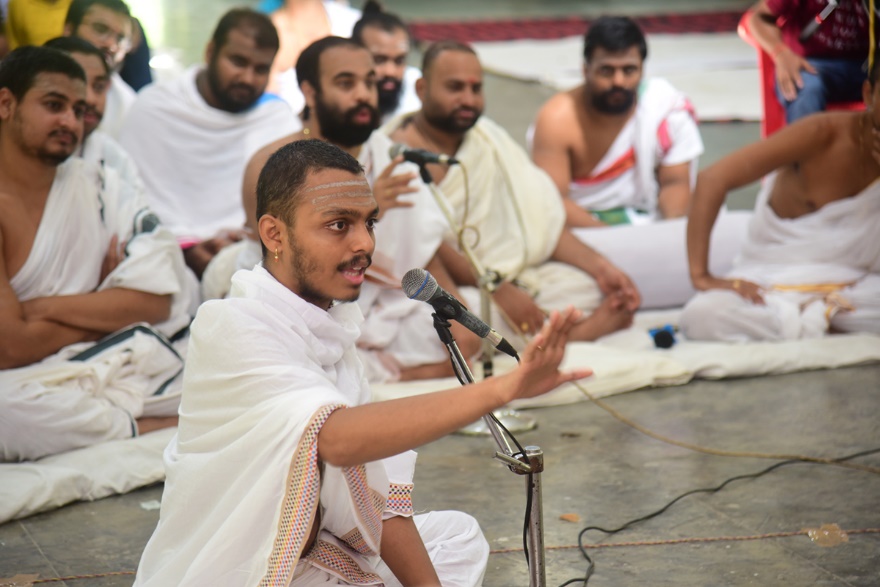 Unlike in seminars, scholars cannot apply to participate and their academic qualifications or designations don’t matter while choosing the speakers for the Sadas. Sri. Viswanath Gopalakrishna Shastri from Rajamundry was appointed as the President of the Sadas, and then the President chose fifteen eminent scholars to be part of the Parishat(panel). This panel suggested names of around a hundred scholars from twelve different Shastras belonging to three different countries. The panel also suggested the topic for each scholar. Speakers cannot choose the topic according their convenience and preparation. This is to make sure that the invited scholar has kept his whole Shastra training intact till date. Unlike seminars, Scholars cannot leave the Sadas after completing their Vakyartha session. It is mandatory for everyone to stay for all three days and participate in all the debates. The sitting arrangement at the Varanasi Sadas was made accordingly so that everyone can sit facing each other in a circle. It would be even more shocking for people from a regular academic background to know that in the Sadas the speakers won’t be aware of his time of presentation. They are expected to be ready with their respective topics and always present for the complete duration of the Sadas. The president or moderator may call their name at any time and ask them to start spontaneously. It’s also noteworthy that nobody will be allowed to keep any written notes or use Power-point presentations while speaking. Scholars must have that kind of hold over their Shastra to be invited in such Sadas. The panel considered the maha-pareeksha conducted at Tenali as the basic criteria of eligibility while selecting the scholars.

Usually it is only four Shastras(Grammar, Logic, Meemamsa and Vedanta) which are discussed in Vakyarthas that are organized by traditional mathas as these four Shastras are useful for sanyasis belonging to various Vedic Sampradayas. As a result, all other traditional sciences like Vaisesika, Mathamatics, Yoga, etc are left out and the number of scholars in these sciences is also in decline due to lack of patronage. These sciences might have been part of University courses but the traditional rigor and order of books to be studied is lacking in the short span of these courses. Unlike in traditional gurukuls, the evaluation or examination procedure in the university structure does not set high standards of learning.

Therefore, a panel of this Sadas decided to identify and invite scholars who belong to these shastras who were left-out from the Gurukula method of examination and vakyartha practice. According to the President Sri. Gopalakrishna Shastri and other members of the parishat, it was very difficult task to find out scholars of Yoga and ayurveda who are capable of doing Vakyartha in their respective Shastras.

The Vice-Chancellor of Sampurnanand Sanskrit University, Sri. Rajarama Shukla had made sure that the Sabha happens in it’s purest and traditional form. Out of over a hundred invited Pandits, sixty-two of them belonging to twelve different shastras were able to make it to the event and they performed vakyartha on thirty-two topics. The Rajguru of Bhutan’s Royal family and head of Bhutan’s Hindu samaj Sri. Vivekanand Saraswati was a part of the panel and three scholars from Nepal were present among the speakers. 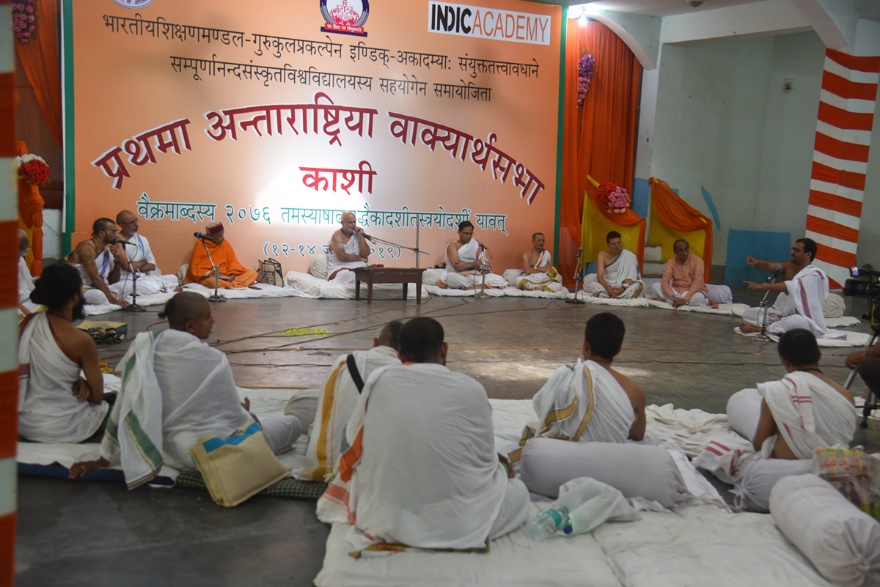 There are over fifty Sanskrit colleges at Varanasi which are affiliated to Sampurnanand Sanskrit University. Lectures, students and research scholars from these colleges and BHU’s Sanskrit Department were also present as listeners at the venue. All in all, it was a huge gathering of over a hundred and fifty traditional scholars for three days: never before seen in recent history. Due to massive coverage of the media, curious commoners from Varanasi were visiting the venue to have a glimpse of the Sadas. You may see the proceedings of the Sadas here.

The first session of the Sadas started at 7 AM in the morning with invocations to Ganapati and a brief inaugural speech by the president. The first Vakyartha was begun by Vaisesika scholar Datta Bhargave Tengse. The moderator of the Sadas, Sri. Devadatta Patil had given the strict instructions to the organisers that no time would be wasted in formalities and casual talks during these three days so that we can give sufficient time for all thirty-two topics. He also had made it clear that no one is above the Shastra, and everybody was equal in this Sadas. Hence, no guests would be called on the podium, no felicitations, no pleasantries, no garlands and speeches. Whoever it might be, they won’t be allowed to interrupt the flow of the discussions.

As per to his instructions, the organizers had kept no podium at all and no formal activities were planned. The UP Chief Minister’s economic advisor Sri. C. V. Raju, Nepal’s former high commissioner Sri. Vasudev Adhikari, Ram Manohar Lohiya University’s Vice Chancellor Sri. Manoj Dixit, BSM’s national secretary Sri. Mukul Kanitkar, Prominent Buddhist monks from Sarnath and many other vice chancellors and former vice chancellors of various universities were present at the venue as invited guests. But all of them were asked to sit in the listener’s gallery to maintain the sanctity and structure of the traditional Sadas. 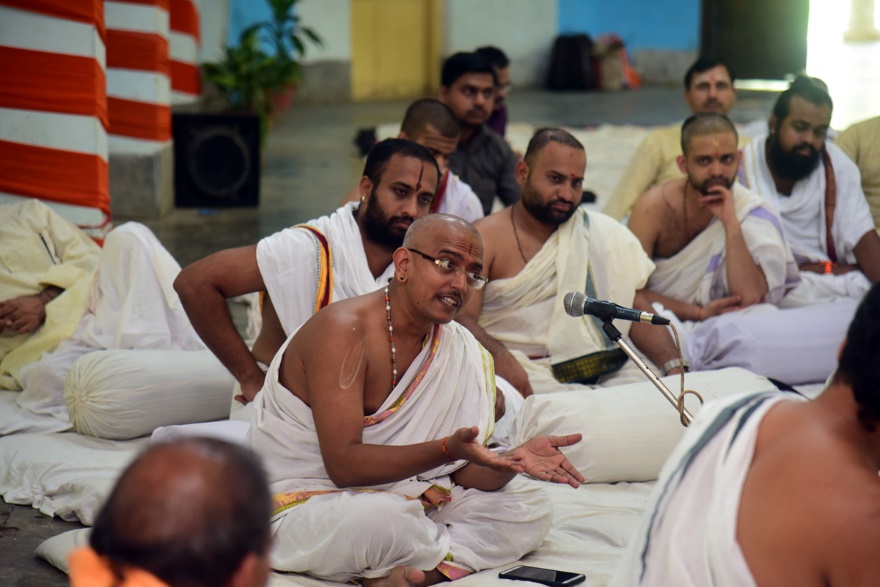 We often see in several events that the introduction of each speaker or guest takes a lot of time off the event. To dedicate the maximum time for the discussion of Shastra, Sri. Devadatta Patil did not spend a single minute in this formality and skipped the introductions of the speakers. However, everyone in the Sadas will be aware of each other even before entering the Sadas. Even if they aren’t familiar to each other, that’s not a concern in the traditional knowledge disciplines.

Sri. Tengse was asked to speak on “शब्दस्य अनुमानत्वम” from the Vaisesika Shastra. Pratyaksha, Anumana and Shabda are three major pramanas in the process of acquiring knowledge. The Vaisesika discipline considers only two pramanas and puts shabda into the anumana category. Sri. Tengse’s task was to explain and establish the same and answer all counters. He did his job in a splendid way in the time slotted to him.

The first session was from 7:00 AM to 10:00 AM in which three scholars performed vakyartha including Sri. Tengse. The second session was from 10:30 AM to 01:30 PM, dedicated to three topics from the Nyaya Shastra. The third session was from 03:30 PM to 06:30 PM in which four topics were discussed. The fourth session of the day was from 08:00 PM to 10:00 PM in which Vedanta and Nyaya scholars from Nepal presented their respective topics. Some young scholars and listeners were finding it difficult to sit for 11 hours a day, but most of the senior scholars and seventy- year old president was happy that most of the time from the day has been utilized and good discussions took place on day one. 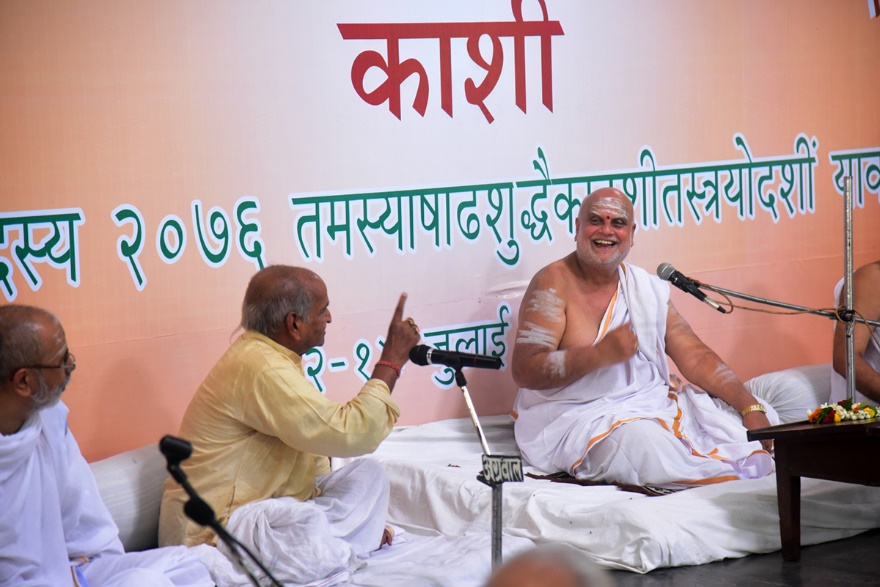 Varanasi is home to more than twenty griha-gurukulams where over hundred youngsters study various shastras and also attend Sanskrit colleges. These students and their teachers had requested the organizers to include them into the Sadas and give them an opportunity to speak in front of the eminent panel. Considering the hectic schedule and the long list of topics, it was impossible to accommodate local students and scholars into the Sadas.  The Vakyartha procedure was unknown to them as they followed the discipline of Shastrarth only. Therefore they were given a separate venue to have a parallel Shastrarth event in the same campus. Professor Vasishtha Tripathi, a revered scholar from Varanasi presided over this Shastrarth Sadas at Vagdevi Temple and more than fifty students performed Shastrarth on various topics.
The education minister of Uttar Pradesh Sri. Dinesh Sharma learnt about these events and congratulated the organizers and stated that this is nothing but “Kumbh Mela of Scholars” at the Varanasi. 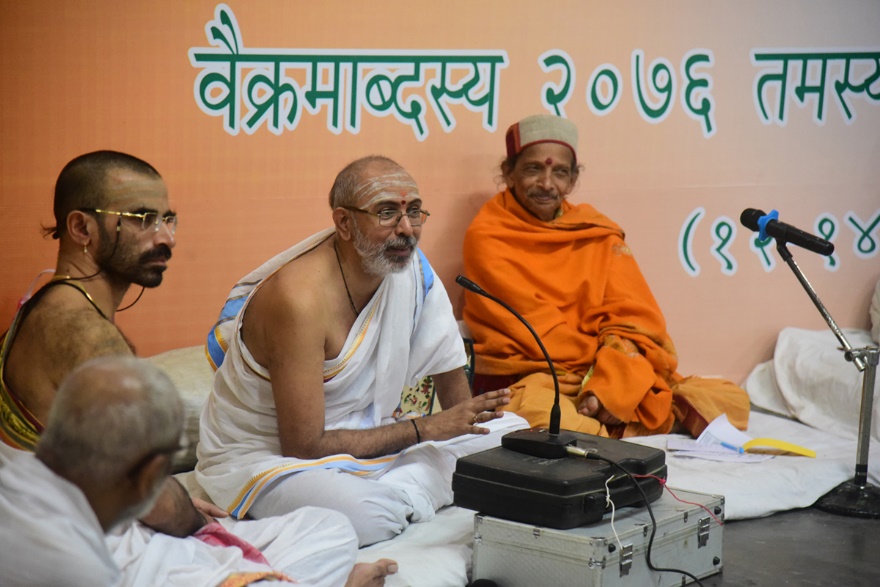 Arranging the food and stay for all participating scholars was the most difficult task for the organizers as these scholars belong to various sampradayas and they follow different daily rituals. Some were agnihotris who don’t have any meal unless they finish their daily rituals. Similarly many others prefer to cook for themselves and they don’t eat unless it’s cooked on coal fire. More than ten scholars from south India had requested the organizers to arrange well water only. Over twenty people had come from Nepal and they had different preferences. The organizers had to make five different types of cooking arrangements over ten different locations. Organizers identified five houses with wells arranged stay for certain scholars who use water only from well. Organizers also vacated several staff quarters at the university and arranged “yajnashala” for agnihotra practitioners to stay and cook. Bharatiya Shikshan Mandal had assigned over fifty volunteers with traditional knowledge to look after these pandits and bring them to the venue for every session.