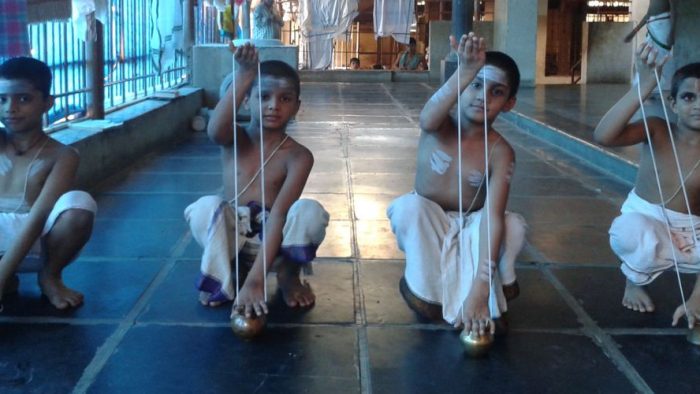 In an earlier article, we had seen how our ancestors pursued every activity of life within a Dharmic framework, and how each activity was marked with a ‘samskara’. Every phase of life was meant to refine one’s soul, heart and body that would enable the individual to progress further in the spiritual plane of life. In a second article, we had examined the nature and importance of the ‘upanayana’ samskara. This all-important rite marked the beginning of an individual’s journey into the world of Vedic, and spiritual, studies.

A cursory look at the list of the still extant samskaras show that our ancestors placed immense importance to education.

Vedic tradition insists that the process of education is a life-long one. While the material for study varied depending upon an individual’s ‘varna’ the exercise of studying itself, termed ‘adhyayana’, was mandatory for all classes of individuals. Similarly, the requirement of spiritual pursuits was irrespective of the ‘ashrama’ of an individual. Brahmacharis, gruhasthas and even vanaprasthas had to constantly do adhyayana. Needless to say the financial status or societal position of an individual also did not matter. Even Kings had to study as much as possible.
Before doing so, we will diverge a little and list down a few samskaras besides the upanayana devoted to learning.

The pursuit of knowledge did not end with the samavartana. The study of Vedic knowledge throughout the life of a person was structured around two important samskaras – Upakarma and Utsarjana. These ceremonies marked the beginning and completion, respectively, of Vedic studies every year. Let us look at these two samskaras in a little more detail in this article.

What is the Upakarma?

The Upakarma samskara marked the beginning of the cycle of Vedic studies of an individual each year. The word Upakarma literally means ‘opening, starting or beginning’1. While commenting on shloka 1.142 of the Yajnavalkya Smriti, the commentator Mitakshara explains Upakarma as follows:

Therefore the ritual that marked the commencement of the annual session of Vedic studies is Upakarma.

When should the Upakarma be performed?

There is, however, quite a bit of flexibility shown with respect to these dates. Baudhayana Grihya Sutra suggests the performance of this samskara in Shravana or Ashadha. Manu directs that the ceremony be performed on the full moon day of Shravana or Bhadrapada. The Kurma Purana narrates that any of the three months viz Ashadha, Shravana or Bhadrapada are acceptable.

As per tradition the following are the typical dates on which the Upakarma is performed:

The Garga Smriti further indicates that the most appropriate time is when the Sun is additionally in the Simha rashi (constellation of Leo). This tradition, though originally meant only for those residing north of the Narmada river, is now in practice amongst the Tulu speaking community of coastal Karnataka, apart from a few other communities.

Almost none of the scriptures provide any clue on why only the three months of the rainy season – Ashadha, Shravana and Bhadrapada – are auspicious for this samskara. Sri P V Kane speculates as follows2 on the possible reason behind the timing:

“Why so much importance was attached to Shravana as the season for starting Veda study is obscure. It is possible that the month was originally chosen as owing to showers of rain it is pleasantly cool, there is more leisure and staying inside the house in that month for brahmanas than in other months of the year and then Nature is at its best.”

Another reason that could be speculated is based on the deity who is the lord of the Shravana and Hasta nakshatras. Vishnu rules Shravana nakshatra and Savitru rules Hasta. Both of these deities are extremely auspicious for Vedic studies. But it has to be conceded that the exact reason for the choice of these dates is not clear.

Who should perform the upakarma?

The Upakarma is mandatory for all brahmacharis, gruhasthas and even those in the vanaprastha ashrama. The ceremonies are to be performed under the leadership of one’s own Guru. However, these days, the same is done under the guidance of the family purohita.

How should the upakarma be performed?

The exact rituals involved in the Upakarma are numerous and varied. The variation is chiefly based on which Grihya sutra is referred to. The procedure is different, therefore, for the followers of each branch of the Veda. Still, a considerable number of rituals do overlap. A quick study of one of the methods – that of the Rig Veda Upakarma based on the Ashwalayana Grihya sutras, will still be very useful.

The Upakarma starts with the purification rituals of achamana and pranayama. This is followed by a sankalpa and the worship of Ganapati seeking clearance of any obstacles that may turn up during the ceremony. This is followed by a homa (sacrificial offering) in which ghee is offered as oblations to nine devatas – Savitri, Brahma, Shraddha, Medha, Prajna, Dharana, Sadasaspati, Anumati, Chandas and (various) Rishis. After this, a charu (offering made from rice or barley mixed with curds) is offered to twenty deities – Agni, Aptrnasurya, Agni, Shakunta, Agni, Mitravaruna, Agni, Apah, Agni, Maruts, Agni, Vishwedevas, Agni, Indrasoma, Indra, Agnamarutah, Pavamanasoma, Pavamanasoma, Agni and Samjnana. A last offering of charu is then offered to the devata Agni-Svishtakrut.

The remaining portion of the charu is then partaken by the people participating in the ritual while reciting the ‘dadhikravno….’ mantra from the Rig Veda.

This is followed by the offering of the ‘yajnopavita’ into the homa and the daana of the yajnopavita to few brahmanas along with dakshina. Each participant thereafter puts on a new yajnopavita himself and discards the old one. This changing of the sacred thread is accompanied by the worship of the nine devatas – Omkara, Agni, Naga, Soma, Pitru, Prajapati, Vayu, Surya, Vishwedevas – who reside in the nine strands of each yajnopavita amidst the chanting of the ‘yajnopaveetam paramam pavitram….’ mantra.

At the end of the ceremony, the Omkara, Vyahrutis and the Gayatri is recited again by the chief purohita or Guru and the prayaschitta rituals are performed to atone for any mistakes during the entire ceremony.

The Grihya sutras prescribe an anadhyayana (holiday) period of three days after the completion of the Upakarma. Thus the actual study of the Vedas commences from the fourth day after the samskara.

The Utsarjana samskara is complimentary to the Upakarma. The word ‘utsarga’ means cessation. It signifies the completion of the Vedic studies, for the year. The existence of this ceremony indicates that there used to be an official window during the year when studies of Vedic scriptures used to be undertaken.

The Smritis agree that the months when the Utsarjana samskara is to be performed is either the Pausha or the Magha. Yajnavalkya Smriti further directs that the day on which the Rohini nakshatra rules is the most appropriate one for this ceremony.

“In the month of Pausha, when the Rohini nakshatra exists, or on the days of the Ashtaka3, one should consecrate the Vedic studies at the outskirts of the city near water”

On the other hand, the Baudhayana Grihya Sutra suggests that the full moon day in the month of Pausha or Magha is the more appropriate date for this ritual. Other variations too exist, depending upon the particular Grihya or Dharma sutras consulted.

Depending upon whether the Upakarma was performed during Shravana or Bhadrapada, this allowed for a period of five and a half or six months for Vedic studies each year.
In order to aid in understanding the rituals involved, the procedure followed by the Rigvedins is described below. The ceremonies for the other branches are fairly similar, with differences mostly in the mantras used.

The usual sub-rituals of achamana, pranayama, wearing of pavitra (made of darbha grass) is performed to begin with. The punyahavachana ceremony is then performed and the panchagavya (a sacred mixture of milk, curds, ghee, gomutra and gomaya) prepared and used in this ceremony is consumed by all.

This is followed by a ‘tarpana’ ritual where oblations, with water, is offered to the devatas – the Chandas, the Vedas, Rishis, ancient Acharyas, Gandharvas, other Acharyas, and Pitrus. A homa called as the utsarjana homa is then performed. Amidst the chanting of several mantras from the Rigveda and few shlokas from the Puranas, oblations are offered to various Rishis, the nine and twenty deities (as listed earlier in the article). A brahmayajna is performed subsequently.

This is followed by a prayaschitta homa. Numerous mantras from the Rigveda that correspond to the ‘aapa’ devatas are chanted and a ‘marjana’ ceremony (sprinkling oneself with water consecrated with the mantras) is performed.

All of these ceremonies are undertaken, wherever possible, on the banks of a river away from the city or town. The entire procedure is preceded by a bath in the river.

Like the Upakarma, the Utsarjana also imposes an anadhyayana (no-study) period of three days following the samskara.

Over time, the practice of performing Upakarma and Utsarjana separately has reduced. Based on the injunctions in the Gobhila Smriti and the Smryarthasara, the two samskaras are performed together now. The Utsarjana ceremony, of course, precedes the Upakarma.
Conclusion

The Upakarma and Utsarjana samskaras help provide a format and structure to the study of the Vedas. They also serve as an occasion to offer respects to the Devatas, Pitrus and Rishis only due to whose blessings Vedic knowledge has survived and continues to be passed on from generation to generation.

These days, the two samskaras are mostly symbolic in nature, what with the steep decline in the practice and study of Vedas. The dogged persistence of the traditionalists has ensured that these two samskaras are still alive. If the symbolism is used as a catalyst to trigger a revival in Vedic studies, a resurgence in our traditional knowledge and customs cannot be ruled out.