The Temple and the Teertha 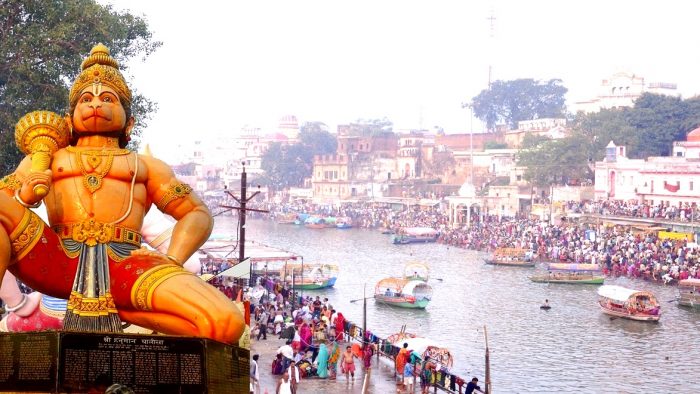 What remains after an Islamic invader destroys a temple? What remains after the vigraha of the primary devata is destroyed or taken away and the temple is also destroyed? Does the sanctity of the place disappear with one such attack? Or is there something greater to a teertha than a temple?

A large part of our country no longer boasts of ancient temples. Starting from the plains of the Punjab and Haryana and continuing through Uttar Pradesh, Bihar, Jharkhand, Bengal, and then extending into Bangladesh is a zone of ruins where very few temples from the pre-Mughal times survive.

A few isolated ones like the one at Nibiyakheda and Bhitargaon in Uttar Pradesh survived because they were completely covered by silt. Some others like the Mundeshwari Devi in Bihar and the brick temples in Purulia, West Bengal survive in greatly ruined conditions preserving just a shell of their former structure. But even these are rarities in this belt.

The greatest centers of the heartland of our civilization are devoid of ancient structures. Mathura can boast of no temple older than a few hundred years. The case of Ayodhya is known to everyone. The case of Kashi is even more shocking.

Despite boasting literally thousands upon thousands of sacred temples, not one predates the Maratha rebuilding of the sacred city. Similarly, Chitrakoot in Uttar Pradesh and Madhya Pradesh is also an ancient place, mentioned in the Ramayana but devoid of any ancient structure.

Chitrakoot is so central to the Ramayana the story of Shri Rama cannot be imagined apart from it.

Chitrakoot is where Shri Rama, Lakshmana, and Sita spent most of their Vanavasa. They lived there for more than eleven years. It is here that Shri Rama came to know about the death of his father, King Dasharatha.

It is here that the famous episode of the Ramayana ‘Rama-Bharat Milaap’ happened. Shri Rama performed the shraddha ceremony for his father here too.

The place is spoken of greatly in the Valmiki Ramayana and is said to be the sacred center where some of the greatest sages of India came to do tapas.

The place is also spoken of very highly in the Mahabharata in the ‘Ramopakhyan section’. Rama speaks of the place in bewitching terms himself. The place is also mentioned in the Adhyatma Ramayana. Raghuvamsha also does not fail to extol its virtues.

Not only this, Goswami Tulsidas made this place famous when he penned Shri Ramacharitmanas. He speaks glowingly of the place and has a special bond with it which becomes evident in his other works too like the Vinaya Patrika. It is the holiest of the cities. And still, there is not a single ancient structure left standing here. Not even the ruins survive.

The first time I went to Chitrakoot I was a little disappointed. I was mostly used to visit places with great architectural heritage.

I never neglected the spiritual element of a temple, but having extensively traveled in Karnataka, Tamil Nadu, and Kerala I had become used to living institutions which were also magnificent structures.

In Chitrakoot, this was not so, like so many other places in the north. There was not a single architectural piece in Chitrakoot which was more than 200 years old.

It felt bad to visit a place that I otherwise felt culturally connected with but which was so completely stripped of any architectural heritage. The ancient structures had so completely disappeared during the medieval era by Islamic invasions in the Middle Ages that not even the ruins had survived.

Yet, as I looked around I realized it hardly mattered to the devotees. If anything, they were even more enthusiastic. The devotees doing the theKamadgiriparikrama were doing it in every shade of devotion.

Most were walking barefoot like us but some were doing it by measuring every inch of the land by completely prostrating themselves, getting up, and doing it all over again continuously through the pathway.

Some were walking deliberately on hot stones even though the shade was available. Some were carrying their old parents on their shoulders.

We were not alone and I am not talking about human beings. The monkeys, as is inevitable in any teertha in this part of North India, were everywhere. They would snatch away anything they could with absolute authority and would stare back at us as if we were the ones doing something wrong.

We asked the shopkeeper from whom we bought Prasada to offer to the temples: “भैय्या, बन्दर तो नहीं छीन लेंगे यह सब? (Brother, will the monkeys not snatch it all)” He replied nonchalantly:

There are various points of interest in Chitrakoot: Ramghat along the Mandakini river at the center of the town is famous because Shri Rama lived here. For a Ram bhakta, the place still vibrates with his presence.

Raghav Ghat is famous as the Ghat where Shri Rama performed the Pinda Daana ritual for his father King Dasharatha. Sita Ki Rasoi is an eternal presence with every place associated with Rama and it is here too.

Reading the Ramcharitmanas is one thing. The devotee at Chitrakoot lives the entire life of Shri Rama that was spent here every second that he spends in this blessed place.

Raghav Ghat is also famous for the legend of Goswami Tulsidas, the Jnani saint who told the story of Shri Rama in a vernacular, making it instantly accessible to millions more, making it a matter of importance for every household.

It was here that Goswami Tulsidas had Darshana of Shri Rama. Layers upon layers of sacred stories continue to sanctify the place as more saints become famous for doing tapas at the teertha. Meaning is loaded upon meaning.

Stories are ensconced within stories. It seems impossible but over the ages, the place acquires more layers of sanctity.

Not a single aspect is overlooked. The structures are diminutive, puny even but the stories are grand, as grand as they are in Vijayanagar, Hampi, or in Rameshwaram.

I was constantly put off by the ‘recent’ structures but consistently amazed by how little it affected the devotees. The priests claimed at every place that the ‘temples were ancient’. They were most obviously not. But all the other devotees that came there were not bothered by the ‘false claims’ of the priests. For them, the age of the structure hardly mattered.

They would throw themselves at every relic of their beloved Shri Rama. For what can be better than touching the very same place where Shri Rama once stood on a stone and left the imprint of his feet?

What can be more fortunate than doing a parikrama of the ‘sphaticshila’ on which Lord Shri Rama rested whenever he got tired, by the banks of the Mandakini river? And who except a haughty ‘scholar’ will try to really judge the age of the ‘sphatikshila’ and whether it is really sphatik or not.

Around the Kamadgiri parikrama, would sit vendors selling the ‘Kanda Mool’ fruit, the same stem of a wild tree which Shri Rama ate. Did he? Or did he not? Who cares!

For them, it was enough that a significant number of other Hindus believed in what they believed. For them ‘maanyata’ (what is generally believed) was enough. Itihasa seemed secondary or even non-consequential. And the shraddha, the bhakti, kept the kshetra alive.

While there is not a single architectural structure that is ancient or even medieval in Chitrakoot, it hardly matters to the devotees. The entire kshetra is sacred with every speck of it reflecting the times and environs of Shri Rama.

With or without the structure, the legend of Shri Rama continues here. Chitrakoot itself, the entire town, is a great Dham, a great teertha.The panchkroshiparikrama around Kamadgiriencompasses the entire area into a sacred center and converts the entire kshetra into a teerthasthala.

What the Islamic invaders did to most parts of India and what they did to Chitrakoot was to destroy its physical structures. They destroyed the temples. They even killed the people who inhabited the land at that time.

What they couldn’t destroy was the teertha itself. For as soon as they left the Hindus would come back and rebuild the temples.

When the attacks continued and the society became impoverished so much so that even this rebuilding became impossible, the Hindus still continued with their worship of the Chitrakoot teertha unfazed.

Structure or no structure, the place remained holy. Temple or no temple, no one could change the fact that Shri Rama lived and breathed here.

The temple is primarily a structure and it can be destroyed. The teertha, on the other hand, is the inner sanctity of the entire place and thus cannot be destroyed until its devotees are all dead or converted, or abandon their shraddha for the kshetra. And the devotees did not. Against all odds, they continued to keep the place as sacred as ever.

They kept it alive by not just believing but ‘knowing’ that the particular ‘sphatikshila’ was where Prabhu Shri Rama sat, and the particular imprint of the foot was where he rested his feet.

It was not a matter of belief for them. It was a matter of ‘knowing’. They ‘knew’ that Shri Rama lived here with Mother Sita. They knew that Shri Rama made this place sacred with his divine presence. They kept it alive by celebrating Ramnavmi and various other festivals here.

This was not just true of the locals. Devotees from the entire Bharatvarsha kept streaming in every festival, and every teertha yatra cycle, and the glory of the place and the legend grew even more.

And as long as this collective Hindu memory of their teerthas remains alive, we will build our temples again, even according to the Agamas, and we will reclaim even the structures and the majesty.

Until the teertha is alive, the temple can always be rebuilt, and for that, we should be thankful to our ancestors, who, against all odds, kept the bhakti and the shraddha alive.

Time has come now to reclaim even the structure, to rebuilt even grand structures and we shall not be behind in it. But what is most important to remember, is that the temple can always be rebuilt until the teertha remains alive.

As the NavRatras start, we have to keep this in mind. For the Shakti Peethas across the country bind our nation together like nothing else. It is not symbolic. To see our teerthas ‘symbolically’ is to see our culture at one remove.

The entire country is actually pulsating with the Divine Energy of the Great Goddess in various different forms and incarnations.

Teertha Sthalas are the epicenters of Bharatvarsha. And Teertha Yatras are the veins through which the blood of the divine prana flows. As long as the Teertha Yatras continue, we shall continue to claim the lands that belong to Sanatana Dharma.

What gives you hope?

Every Nava Ratras, every little corner of Bharatvarsha starts pulsating with the energy of the Divine Goddess. Near my home in Gwalior, the highway turns to a pilgrimage, Ratangadki Mata in Datia district next door.

The pilgrimage is little known outside the small geographical region. And yet in Nav Ratras millions flock to the small temple.

Taking aerial shots would actually show the scale of the teertha yatra to the goddess at Ratangarh. And there are thousands of places like these. Almost every little taluka of every district boasts of them.

In that spirit, let us embark on our journey this year, celebrating the glory of the Great Goddess.