What Is A Hindu Temple? 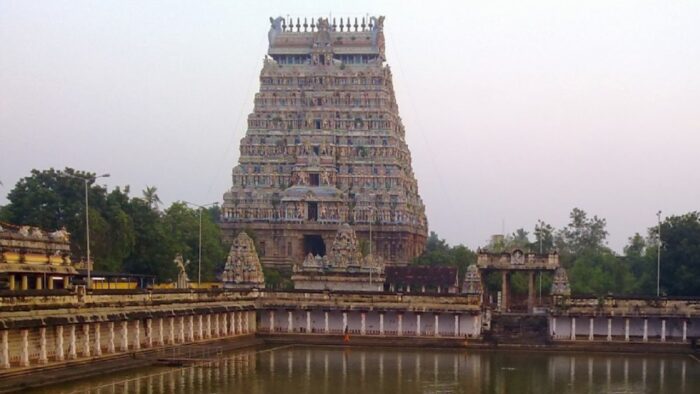 In an interview last year, of Dr. R. Nagaswamy, the great scholar of temple architecture in India, I dared to put up a rather naïve question to his formidable intellect: “How old is the Hindu temple?”

They argue that while there are Buddhist cave temples and chaitya grihas dating to pre-Christian era, the oldest extant Hindu temples date back only to around 4th or 3rd century CE. Further ammunition to this argument is supplied by the resemblance of many temples in Kashmir, Pakistan and Afghanistan to Greek architecture. It was with these thoughts that I had put up the question to him. [1]

Dr. Nagaswamy retorted with a very simple counter-question: “What is a Hindu temple, in your view?”

I remembered having read at one place that a temple constitutes just the garbha-griha (the cella or the sanctum sanctorum), the outer structure which covers it, meaning the shikhara or the vimana and the bali-pitha in front of it.  I regurgitated the answer.

Nodding encouragingly, he asked: “An icon is placed inside four walls with no shikhara; what do you consider it then?”

“A temple…,” I answered hesitantly.

“An icon is placed inside a bamboo hut and worshipped by a few people; what do you consider it then?”

“A temple…,” this time, being more confident.

“An icon is placed under a tree, by a roadside, and worshipped, by the passersby; what do you consider it?”

“A temple…,” I said, now grasping the argument.

“A simple stone is put under a tree, and worshipped as a deity; what do you consider it?”

“A temple”, I said most confidently

“An icon is hung on the wall at your house and you worship it daily; what do you call it then?”

“A temple”, I said, understanding the gist of his argument.

In this sense, the Hindu temple is very old, with its roots even going back to the Vedic age. Even more importantly, a culture like India, which has a cyclic view of time, does not consider chronology to be of primary importance.

The western scholars, having a linear view of time, are obsessed with chronology. Much of their books on Hindu temples are full of discussions about whether a certain form preceded another or vice-versa. They are so obsessed with what came before what, that they lose sight of the essence of the institution that is the Hindu temple.

The Hindu temple is most primarily a sacred structure. And in that sense, the ugliest of the shrines is as sacred as the grandest of the temples.

“The sanctity of the Indian temple depends not on its art or its utility, but on its esoteric significance. The texts of Indian architecture are no doubt prolix and full of technical details; but they do not lose sight of the truth that the temple is chiefly meant to be an instrument of spiritual realization. The devotee goes to the temple with faith in his heart, and expects to find grace in the shrine. It is only when man has faith that he can lay claim to grace. And faith does not need gnosis or understanding of the symbolism involved in the temple. What it needs is the appropriate mood.” [2]

The beauty of the sculpture or the aesthetics of the form does not encourage or deter a devotee. It may be of interest to a cultural tourist or a scholar, but to a devotee they do not matter at all. What matters most is having darshan of the deity, in the garbha-griha. Everything else is secondary to him.

“Art in the temple will not distract him, as it would an art-enthusiast, and technical skill will not hold his attention, as it would a tourist. He floats over these obstacles, and directly reaches the shrine to receive grace.” [3]

The Hindu scriptures on both architecture and sculpture do not disagree. While providing minute details on the construction on every small part of an elaborate temple, at the same time they express the sacred aspect of the temple. This becomes evident from the many classifications of Hindu temples that the texts maintain. Some of them are discussed here in brief. First of all, the temples are classified into public shrines and domestic shrines.

While in a private shrine, anyone of the household can conduct worship, in a temple, only the priest has the right to do so. S. K. Ramachandra Rao says:

While, the public shrines started coming up in the later times, domestic shrines were popular from a very early age. Several Saraswati-Indus civilization cities bear signs of hosting domestic shrines. Thus, if one considers domestic shrine as a temple too, then the Hindu temple has a very long history.

Scriptures like Padma Samhita and Sri Prashna Samhita make distinction among the temples based on the builder and the situation of the temple.

The temple of Amarnath is a swayam vyakta temple and hence does not need consecration and other rituals which are necessary for a manusha temple. Rameshvaram is a daivika temple as its lingam is said to have been installed by Shri Rama himself, along with being a pauranic temple as well. The Vitthal temple at Pandharpur, is an arsha kind of temple as it was established by a great saint. The temple at Tirupati is a pauranic type of temple as it is mentioned in the Puranas. And all other kinds, are manusha temples.

“While the first four kinds of places are holy by themselves, the last variety needs to be sanctified by special effort. The background belief was that the entire area which the vimana overlooked was rendered holy. Thus the vimana construction was a means of sanctifying the otherwise ordinary place.” [8]

It is important to note that all the instructions about Vastu are for the fifth kind of temple, the temple built by human beings, the Manusha category. While the scriptures pour forth on every little detail about constructing a temple, they do not lose sight of the fact the temple is, above all, a sacred structure and thus the simplest of structures, if fulfilling this need, becomes as sacred as the grandest of temples. S. K. Ramachandra Rao stresses:

“Before a temple is built, there are various ritualistic procedures to be gone through like cleansing the earth (bhumi shodhana), worship of the ground divinities (vastu-puja), making of offerings to the attendant spirits (bali-dana), fire-rituals (homa), laying of the first brick (prathameshtika-nyasa), womb-consecration (garbha-nyasa) and so on. Unless these rituals are gone through, the icon installed within the temple built by human donors will fail to accommodate divine presence. However, these rituals are unnecessary for temples built and consecrated by divine beings or sages of great austerity.” [9]

This is the reason that the tradition of temple building was not lost anywhere in India, even after centuries of ruthless destruction. If only the Manusha temples had been allowed to function by the texts, the entire tradition of temple-building would have died down during the age of Islamic invasions, at least in the north and west India. In north India most of the ancient temples were demolished by the invading iconoclasts; and the architects and sculptors having the knowledge of constructing a temple or sculpting an icon died out. Even then the tradition of temple building did not die. It was because the Hindu Shastras also anticipate the needs of the emergencies and their instructions are thus conditioned to time and place.

In the present times, most of the temples that are built in north India are blissfully unaware of the canonical texts, giving birth to fantastic plans and forms. But the faith of the people is as deep as it was before the invasions, and as it is in south India even now. So there is a Swayam Vyakta temple like Amarnath, where some cowherd discovered the ‘divine’ Linga a few decades ago. There is Vaishno Devi and other such temples, which are not at all built on the canonical instructions but are nevertheless as powerful.

In my own city, Gwalior, there is ‘Gargaj ke Hanuman’ (Hanuman that came out of thunder and lightning), one of the most famous temples of Gwalior. About it the story goes that one stormy night, there was a great flash of lightning and with a terrible sound the mountain moved, and a stone in the form of Hanuman emerged on the hill. Very soon the temple became a pious center. The temple is nothing like the canons advocate, but it is a sacred center of faith nevertheless.

Similarly, the Hindu temple is many things at the same time, but it is most importantly a sacred structure. In its most basic form, it is just an icon under a tree. An image is what is considered necessary for meditation, concrete or abstract, though concrete images are recommended for better facilitation. And as meditation and gaining self-knowledge is the goal of almost every Hindu scripture, this barest and smallest of the temples fulfills its sacred goal. This is what should be kept in mind while studying the wonder that is the Hindu temple.