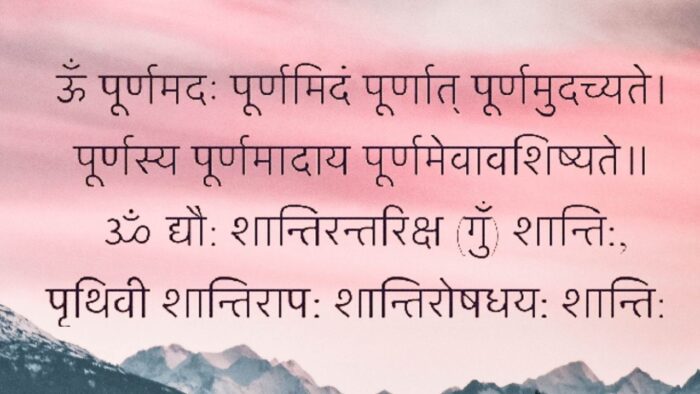 In the previous essay (1), we saw that the Upanishadic mantra (पूर्णस्य पूर्णमादाय पूर्णमेवावशिष्यते) encodes a mathematical relationship consistent with the property of infinities. Since Upanishads were conceived long before modern understanding of infinities and their paradoxical properties, it behooves us to explore deeper on this issue. Were the authors of the Infinity mantra (2) aware of its profound implications, or was this a mere co-incidence?(3) Conversely, are we reading too much into a simple mantra and imagining relationships that do not exist? A rigorous discussion of this issue must tackle these questions.

Ancient India or Bharat is said to have had a strong culture of inquiry and a very rich landscape of scientific thought. On closer observation, one finds that the philosophical construct of the Infinity mantra is not an aberration, but rather a repeating motif throughout various aspects of Hindu Jeevan Darshan(4). These repeating motifs are strong circumstantial evidence suggesting that the Bharatiya (5) tradition truly attempted to understand the infinite. In this essay, I have chosen four of pieces of ‘circumstantial evidence’ that suggest the contemplation of infinity was not restricted to the Upanishads, but rather an important aspect of a philosophically and mathematically advanced civilization.

The astounding multiplicity of deities in Hindu Jeevan Darshan is an aspect of the Hindu Jeevan Darshan that concomitantly embodies absolutely disparate emotions. To some it is an object of resentment, to many it confuses and confounds, while to others still it is amazing and to bhaktas, it is simply enchanting. Swami Achuthananda captures this wild diversity of emotional response in the witty title for his book “Many Many Many Gods of Hinduism” (6). To the mathematically inclined, this astounding multiplicity is nothing more than another representation of the conundrum we encountered in the Infinity Mantra. The take home message of that essay was that the ‘same’ infinity could represent itself as different physical entities. This idea is illustrated again in the figure below, featuring various geometric objects. Take any portion of the real axis, and you will find that it can be mapped to any one of the line segments (i-iv) through a one-to-one mapping. The same is true for the other line segments that are ‘bent’ in different ways. All these objects can be viewed as various representations of the same infinity – namely a finite portion of the real axis. The above diagram is also key to understanding the astounding multiplicity of deities in the Hindu pantheon. Take the example of the Dashavatars (दशावतार) or the ten Avatars of Shri Vishnu. The avatars are usually represented as a temporally ordered set, yet there is no hierarchy within them. The Krishna avatar is neither superior nor inferior to the avatar Rama. In addition, none of the ten avatars is greater or inferior compared to Vishnu himself. When Shri Vishnu incarnates in the human form as Rama, neither his non-avatar self nor the Rama incarnation is in any way diminished. All the avatars are seen to be equivalent to each other and this equivalence is an affirmation of the concept propounded by the Infinity Mantra. Such an affirmation is readily apparent in any Vaishnava temple, which are often populated with multiple avatars of Shri Vishnu. The affirmation is also beautifully captured in the Dashavatara stotram(7), which is a paean to all the ten avatars.

What is true of the avatars of Shri Vishu is also true for the different rupas of Shiva. As these kathas are narrated in the Puranas (पुराण)(8), we can see that the Upanishadic philosophy of the Infinity Mantra reverberates through the Puranic texts. Thus, we see that the Shanti Mantra under discussion encodes a philosophy that reverberates through the Puranas.

In our last essay, we saw that Poorna can imply mathematically either shoonya (zero) or the anantah (infinity) and thus, if the ancient Indians contemplated on the nature of the infinite, they should have also done the same for its antithesis – nothingness. My family says contemplation on nothingness is also my job description, but in my defense I am only following in the footsteps of Rigveda’s Nasadiya suktam (नासदीय सूक्त). This brilliant suktam meditates on the moment of creation, when neither truth nor untruth existed. The suktam goes on to assert that before creation there was no Earth, no space, no water; there was only nothingness – The Mahashoonya or the great zero. It is probably no surprise that the concept of zero as a number originated in India and is usually credited to the brilliant seventh century mathematician Brahmagupta(9). Embracing this concept was a definitive giant leap forward for human civilization. Utilization of the number zero allowed the development of the decimal system and methods, which would become precursors of modern mathematics, were devised to allow the rishis to work with numbers and employ them in different aspects of life. In his book ‘Computation in Ancient India’, professor Subhash Kak states that :

“We find that the ancient Indians were greatly interested in computing methods in geometry, astronomy, grammar, music and other fields”.(10)

A complete review of mathematical techniques used in Ancient India is outside the scope of this essay, but enthusiastic readers can refer to specialized texts to pursue in-depth understanding of these mathematical traditions.(9-11)

If the underlying thought process is mathematical for a civilization contemplating infinities, then one would expect the civilization to have dealt with large numbers also. Bharatiya tradition has a long familiarity with massive numbers. Massively large numbers were part of the early Vedic literature, where names were assigned for all multiples of ten up to 10 18 . Still larger numbers are found in the Ramayana, which has terms all the way up to 10 55. Some of these large numbers are used to denote time-scales. Hindu, Buddhist and Jain texts all contain references to massively large cosmological time-scales. Even spatial length scales in Hindu texts are extremely large. For example, distances from Earth to Sun are usually of the order of millions of yojanas(10). Professor Amartya Kumar Dutta, a noted mathematician, states that “expressions of such large numbers are not found in the contemporary works of other nations”(11). What were these numbers used for? One answer is that the numbers were used to develop extremely complex and intricate astronomical calendars and cosmological models. Yet, why would one need such calendars in prehistoric times remains a mystery to many. Interestingly, whether the large time/spatial scales are correct or not is immaterial to the question at hand. The very conception of such large numbers is a fascinating development in itself. The opposite of large numbers, i.e. infinitesimals, were also explored in India (9)(10) and can legitimately be considered as precursors to modern calculus.

Why is this important? Anytime the human mind is able to transcend the domain of human experience and intuition marks a significant step for mankind. The measure by which the idea exceeds human experience often becomes a metric of its significance. It is quite clear that in pre-historic times man would not have required such large numbers for any ‘human’ experience or practical application. Thus, in my opinion, development of the means to express massive length and time scales is the singular phenomena of the Bharatiya tradition.

For our fourth motif, we leave the world of books and review something cast in stone. The Infinity Mantra talks about poorna being taken out of poorna once, but nothing prevents us from repeating the step ad infinitum. This idea underlies Hindu cosmology, which views the entire Brahmanda (ब्रह्माण्ड or cosmos) as being created from a self-repeating entity – the Brahman.

This idea is embodied in Hindu temple architectures(12)(13). Rian et al.(13) analyzed the architecture of Kandariya Mahadev temple (1030 AD) at Khajuraho and found that its architecture was fractal in nature, and this unique architecture resulted from the synthesis of Hindu cosmology and philosophy as applied to temple design. In a typical fractal structure, a singular geometric unit is repeated ad infinitum by making copies of the unit geometry and reducing its size successively. The figure below shows a fractal known as the Sierpinski carpet, which is created by taking a square and removing successively smaller squares from the ‘unit’. If we allow a bit of room for interpretation, then we can see that fractals can be considered to be a geometrical manifestation of the Infinity Mantra. Fractals such as this can have paradoxical properties, such as a finite area, yet an infinite periphery. To be clear, we are only claiming that the Infinity Mantra’s basic idea has a philosophical continuity to the idea of fractals. This again should be treated as ‘circumstantial evidence’ in consonance with other matters discussed earlier. We should also note that fractals are regarded as a modern 20th century mathematical discovery. We reviewed motifs from disparate parts of the Hindu religious expression to demonstrate how deeply ingrained the pursuit of infinity is to the dharmic philosophy. In the interest of brevity, I did not touch upon certain philosophical schools of Hinduism such as Yoga and Vedanta. The keen observer would find that the Infinity mantra reverberates in those schools as well. Thus, the Infinity Mantra encodes a fundamental philosophy of the Hindu Jeevan Darshan. Thus, the idea of ‘poorna from poorna’ of the Infinity mantra represents a repeating motif. It is this repeating aspect that makes the mantra so significant. As a corollary, we also find that complicated mathematical and philosophical ideas are at the base of Hindu thought.