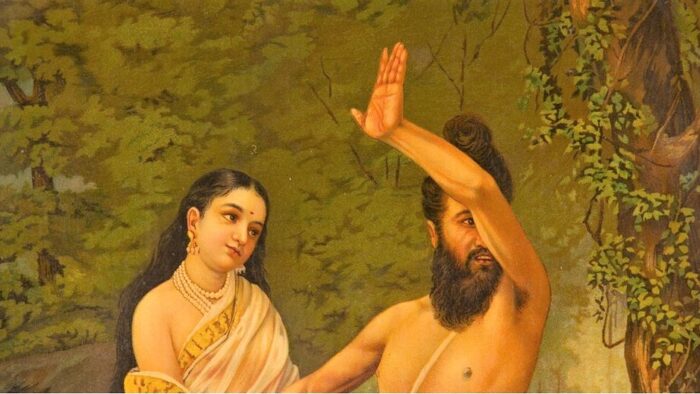 The Purāṇic journey with the celestial Apsaras is consistently elevating and dramatically exciting. The thrill lies in the manner in which these mythical damsels have been the skylights of the Purāṇic edifice. Often a bait of attraction to the Earthly beings, these heavenly charmers navigate the Earth and the Heaven liberally executing tasks and creating cheerful confluences in Purāṇic ocean .

From a Doe to an Apsara

As per the Skanda Purāṇa , in the bright half month of Chaitra on the third lunar day, with the Bhaaraṇī constellation studded in the sky, an Apsara got life. It was a Sunday and at midday, a doe was hit by an arrow of a hunter. The injured doe entered a Kunda – water hole and let go of her life there. The water hole was fed by a waterfall and was blessed with the purity and Divinity of river Ganga .Having died on an auspicious day, in the magical water hole , the doe was transformed into a beautiful Apsara. The beautiful doe turned Apsara was Menaka. Apsara Menaka would regularly visit the water hole to offer her gratitude. With great devotion she would take her holy bath on the third lunar day in the bright half of the month of Chaitra when the constellation would be Bharaṇī and it would be a Sunday.

Once when Apsara Menaka was visiting the Kunda to take a holy bath,  she saw the handsome and youthful Rishi Viśvāmitra in the vicinity. He was as radiant as the sun the ignited desirable attraction . Upon his sight, Apsara Menaka fell in love with him instantly. She was restless, so she decided to meet Rishi Viśvāmitra and charm him. On seeing the beautiful damsel, Rishi Viśvāmitra remained calm. He was accommodative but unmoved by the magnetism and beauty of the Apsara Menaka .

Instead of falling to her desire , Rishi Viśvāmitra spoke to Menaka about Stree-Dharma –worthy duties of a wife. He addressed Apsara Menaka as his daughter and initiated his list of conduct and duties that is expected from a dutiful wife and a virtuous woman.

The Curse of Meneka

Menaka patiently heard the rules laid for a virtuous wife as listed by Rishi Viśvāmitra and confided to him that she was a celestial nymph and not a human. She conveyed to him that being an Apsara, she was free from the clutches of duties and abstinence. She expressed her uncontrolled desire for him and in deperation requested his company. She further added that his denial would mean death to her and make him an offender with the burden of her murder.

After listening to Apsara Menaka’s carnal desire, Rishi Viśvāmitra mellows her down by citing his dedication to Śivaśāsana that has kept him totally ignorant in matters of love. He informs her that with his vow to  Lord Pāśupati, he is restricted to even touch a woman. Any deviance from the vow would push him to Narka-hell. He decently asks Apsara Menaka to leave him and save him from the sin. Apsara Menaka continues to try her luck and keeps alluring and chiding him, but all in vain.

Subsequent to much resistance ,Rishi Viśvāmitra is angered by the way the Apsara tries to attract him persistently. He fumes with fury. He denies any contact with Menaka. Apsara Menaka feels rebuked and insulted. She is angered by his unwelcoming nature and denial to accept her. In a fit of rage, she curses Rishi Viśvāmitra with ‘Old Age’. She curses him to be transformed from his youth to a fragile old man with wrinkles and grey hair; shattered limbs, weak vision and lusterless colour. Soon the curse is met and Rishi Viśvāmitra becomes aged and weathered.

Consequent to being cursed by the Apsara for no fault of his , Rishi Viśvāmitra is enraged and in turn curses her of ‘Old Age’. Apsara Menaka too is transformed into a crumpled and grey haired woman.

Riddance from the Curse

Meaning – O Maharshi, O dear Child, welcome . Pleased with your intense austerities, O Son of Kushika, I confer upon you the eminent rank of a great Rishi -Maharshi.

Rishi Viśvāmitra recognized the holiness and the magical properties of the water hole that had helped him redeem the curse of Apsara Menaka giving him back his youth. Being a practitioner of Śivaśāsana and a follower of Lord Shiva , Rishi Viśvāmitra installed a Shiva  Liṅga by the name Viśvāmitreśvara at that very place . By his power and rituals he expanded the Kunda into a wide lake. Viśvāmitreśvara came to be accepted as a Tīrtha.

The water of the lake is still considered at par with the piousness and purity of River Gaṅgā having commendable capacities to cure ailments. A bath in the Kunda is also considered to destruct all sins , yielding to the fulfillment of wishes. It is also believed that who takes a holy bath with faith, and sanctity shall attain place in Swarga-heaven .The Viśvāmitreśvara Tīrtha bestows illustrious handsomeness on men and beauty on women.

The story of Menaka’s honey trap for Maharishi Vishwamitra is extensively popular. The present narrative of Rishi Viśvāmitra’s resistance attracting the curse of Apsara Menaka as described in the Sknada Purāṇa remains considerably veiled. This legend soothes the widely discussed lustful itchiness of the duo, that leads to creation of a pilgrimage inspired by the two – Apsara Menaka and Rishi Viśvāmitra.