One such metaphor is bija, or the cosmic seed coupled with the symbolism of hiranyagarbha, or the cosmic womb. These metaphors are used not just in Hindu iconography but also in sculpture, architecture, painting, and dance, etc.

The temple in Hindu iconography is symbolized as a sacred tree. A tree comes out of a seed. Under the main vigraha in the garbha-griha, hidden underground, is a kalasha which houses navagrahas, collectively signifying the seed of the deity, the temple, and the divine consciousness. Similarly, there is another bija inside another kalasha, at the top of the temple shikhara, above the amalaka.

This seed, or bija, is the most important symbol in the Hindu temple. It contains nothing and yet contains the possibility of everything. It is equated with Brahman of Vedanta and shunya of Buddhism. Bija is not the only metaphor that is shared across disciplines or art and philosophy. There are many.

Bija is the principle of the centrality of the unmanifest. It is the one which becomes many. In Nature, a tree springs forth from a bija, a seed, which first becomes a sapling, then a plant, then a tree which then bears fruit which contains the seed, the bija. The cycle comes full circle.

Similarly, the cosmic seed is a bindu, with is nothing and has no dimensions but which nevertheless contains the potentiality of everything. It gives birth to the infinite number of individualities in the universe but is then reflected in each and every one of them.

“Bija thus is the first metaphor of denoting organic growth, the process of the unfolding from the one to many. It alludes to undifferentiation and differentiation while being an integral whole. Also, it provides the basis of a system of coding and encapsulating.” (Vatsyayan 61)

The Dharmashastras also expand on the metaphor of Purusha. Thus we see the same shared vocabulary germinating growth in various disciplines of philosophy and art.

Another unique symbol in Indic culture is the Nabhi which extends the metaphor of the bija. It is the place from where expansion happens, creation takes place. The nabhi of a mother is the place which connects the child to the mother with the umbilical cord. In mythology, it is the nabhi of Vishnu from where Brahma is born and who gives birth to the rest of the creation.

In a Vedic Yajna, the Yajna vedi is the nabhi, from where the divine consciousness arises. Similarly, the garbha-griha, the seat of the main vigraha is recognized as the nabhi of the Vastu Purusha in temple symbolism. The symbolism carries on in Tantra too and is also very potent in most temples.

In iconography and iconometry it is the nabhi which decides the center of the composition. The position of head, neck, shoulders, arms, and feet are judged with the nabhi as the center. The same is the case with dance. In music too, voice produced from the nabhi is accorded the highest pedestal.

Sculpture and the Shared Vocabulary

The most fundamental way in which the Hindu sculpture differs from the other significant pagan traditions is iconography. Hindu iconography does not just stop at the level of realism. Transcending Nature and naturalism in art, Hindu iconography developed an entire grammar of symbols and meanings using various gestures of hands, poses of body, and using the various opportunities that multiple hands and the ayudhas provide.

Hindu iconography developed such an elaborate system of meanings and symbols that meaning became primary in any Hindu sculpture, even overtaking aesthetics. For it is very hard to identify a deity by its facial expressions. You have to identify the ayudhas that they hold, the poses that they take, and the kind of ornaments or mukutas (headgears) that they adorn. The focus here is not realistically identifying the facial features of Shiva or Vishnu.

The focus of Hindu iconography was to impart meaning to every piece of sculpture, to develop a shared dictionary of meaning which would make a sculpture immediately meaningful to a devotee who shares the same cultural sphere.

But was the devotee aware of this iconography? Yes, he was. The most common point of contact between the devotee and the meaning of the sculpture and other arts were the mantras that were part of any worship or temple going.

Any worship, any ritual in a Hindu home or a temple is not complete without the recitation of sacred mantras. Many of these mantras directly invoke the gods, explaining upon their sacred aspects and physical attributes. The attributes of the devatas, both physical and psychical are extolled in these mantras. The story of their appearance is told. Their conquests over demons of ignorance are recited. The benefits of meditating upon them are told. The mantras, strotams, and stutis cover everything.

Even if one does not understand the Sanskrit language very well, the continuous recitation over a period of time gradually leads to a stage where the mantra starts to open its secrets to the one who is reciting them, gradually revealing layers of meaning. This was how the devotees came in contact with the meaning of art.

The Sacred Meaning of Architecture

How does the Hindu temple become meaningful? Meaning is not emergent in Hindu architecture. It is inherent. The temple is built in a way which imparts meaning to it from the beginning. It represents the entire cosmos.

This is not just reflected in the rituals associated with the temple but also in its architecture. The Hindu darshana imagines macrocosm in microcosm (Yathapinde, tatha brahmande), and this thinking is reflected in all art in India. It is also the basic idea behind the idiom of the aedicule in temple architecture.

In the context of the Hindu temple, the term aedicule refers to the miniature shrine or a mini replica of the entire temple, temple shikhara, or vimana, which is to be found most prominently on its shikhara and outer walls of the garbha-griha.

It is found in all three major varieties of Temple architecture – Nagara, Vesara, and Dravida and is so profusely used in some architectural styles such as that of the Kalyani Chalukyas and Hoysalas of Karnataka that Gerard Foekema calls the very style as ‘architecture decorated by architecture’. 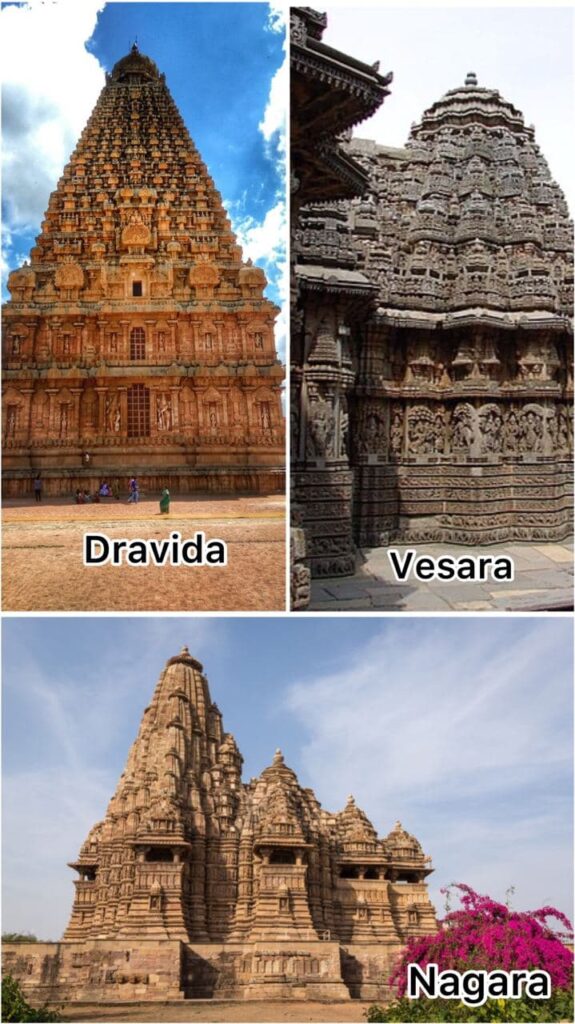 James Fergusson observed “everywhere…in India, the architectural decoration is made up of small models of large buildings.” (Ferguson 285) Adam Hardy who considers the idiom of aedicule as the fundamental concept behind Indian architectural thinking, says: “…it was sometime after my first trip to India that it gradually became clear to me that aedicules are not just ornaments, but the basic units from which most Indian temple architecture is composed.

Temple design is conceived as containing numerous smaller temples or shrines, arranged hierarchically at various scales, embedded within the whole or within one another. Once this simple concept is understood, other things fall into place.” (Hardy 10)

The entire temple is reflected in its parts. Sometimes the aedicules are themselves made up of smaller aedicules and this series continues up to the point where architecture allows it to. It conveys the idea of an endlessly regressing series of aedicules, something like the fractal geometry. Is there a better way to reflect Indra’s net? Is there a better way to reflect a macrocosm into a microcosm?

The temple does not just house the deity. The temple itself is a deity. Those who study the Agamas are familiar with the Vastupurusha. The Vastupursha is mapped on the profile in two different ways. One of them matches the elevation of the temple and another, the profile. And the terminology that is used to denote the parts of the temple makes it possible for the devotees to intuitively grasp the temple as a Purusha.

The shikhara is self evident. A temple shikhara is made to look like a mountain shikhara. The part beneath the amalaka is called greeva, or the neck. The outer walls of the garbha-griha are called the jangha, signifying yet another body part of the Purusha. The Purusha that overlaps the elevation of the temple also proceeds in the same manner. 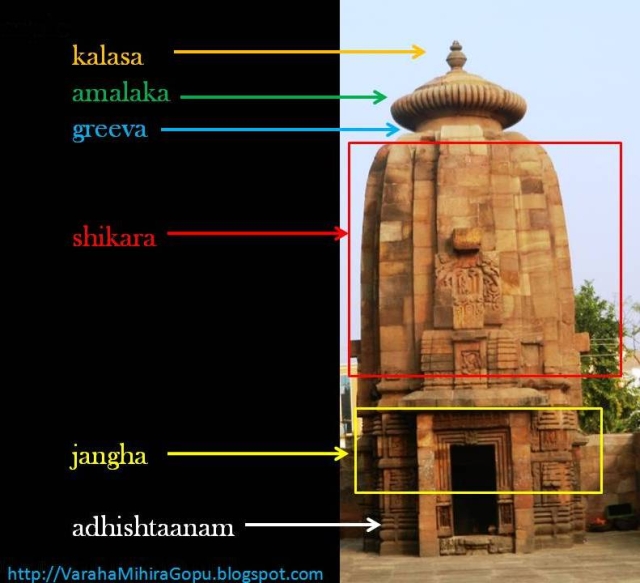 Illustration of various parts of the temple

The elevation of the temple unmistakably signifies a mountain and the stories of that same mountain are again and again repeated in the myths that are told and retold by the devotees all over the sacred land. In the shekhari and latina style of Nagara idiom, the temple shikhara is made up of various small shikharas, giving the impression of the various urushringas, or small mountaintops that jut about around a real mountain.

The symbolism and meaning of Indian arts are quite evident in its iconography, in the names of its various modules and parts, in the mantras that are recited, and the rituals that are enacted in the temple. The temple is the center of virtually all Indian arts and thus the rituals that went into the temple going illumined the symbolism and meaning behind the complex iconography related to sculpture, dance, music, etc.

Explore Symbolism of Temples Part I