3. ShriKrishna – The Epitome Of Compassion 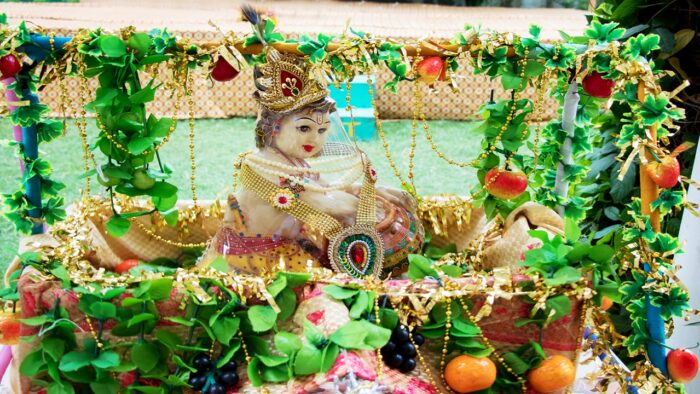 “Whenever there is decay of righteousness, O Bharata,

And there is exaltation of unrighteousness, then I Myself come forth”

This act truly depicts The Lord’s Karuna[1] for the protection of his devotees and the establishment of Dharma.

ShriKrishna is known as Atmarama, which means ‘self-satisfied’. His disposition towards us is of complete and full compassion. Such is His compassion that he is always accessible to sincere devotees. He does not even interfere with their sadhana[2] or the lack of it.

We, living beings spin on the wheel of reincarnation for as long as the desire to reconnect with the Divine is absent within us. However, throughout this time, Lord Krishna, remains close by and does not abandon us.

Lord Krishna is not only compassionate towards his devotees but also to those who wanted to harm him. The she-demon Putana was always hankering for the blood of human children, and with that desire she came to kill Krishna, however, because she inadvertently offered her milk to the Lord, she attained the greatest achievement. Krishna not only granted her moksha, being Compassion personified,he also promoted her to the position of a mother in the transcendental world and Putana achieved the highest perfection. What then can be said for those who have natural devotion and affection for the Lord, who is truly a “KarunaSindhu”[3]!

Mother Yasoda once caught ShriKrishna, seated on a wooden mortar, offering butter to a cat. In a fit of rage, she tried to tie her divine son to the mortar. Her attempt to tie the Lord became futile as the cords, all joined together, were still wee bit short for the purpose. This caused laughter and surprise to her companions. She became ashamed and exhausted. Seeing her physical and mental agony, the Lord grew compassionate towards Mother Yasoda and allowed her to tie him. The cords at once were found quite sufficient and she tied Him to the mortar. The cord represents the rope of bhakti that ties Krishna to his devotees.

The Lord’s infinite compassion transformed Trivakra from a hunchback to a beautiful lady. Referred to as Kubja due to her hunchback, Trivakra upon seeing Krishna and Balram when they visited Mathura, applied sandalwood paste to the divine duo with pure devotion. Highly pleased by her devotion, Lord Krishna pressed her legs with his feet and held her chin with his fingers. Kubja’s hunch disappeared. She became straight and turned into a beautiful lady. Upon Kubja’s earnest implorations, the Lord promised to visit her dwelling which he did later along with Uddhava. Such is the Lord’s compassion!

Krishna, an epitome of compassion, by way of offering Guru Dakshina to his Guru Sandipani, rescued his son from demon Panchajana.

Lord Krishna had 16,108 wives, 8 principal and 16,100 junior wives.  The story goes that Narakasura, the asura king, had enslaved 16,100 women from all over the world, including nymphs, princesses, and goddesses. Lord Krishna killed Narakasura and freed the women. However, the women’s families disowned them. Spurned and turned away from their families, when the ladies approached Lord Krishna, the compassionate Lord married them and took them under his refuge!

ShriKrishna’s compassion for us is unconditional. In this regard, Lord Chaitanya, the yuga avatar of Lord Krishna, found a south Indian Brahmin shedding tears while reading the Bhagawad-Gita. When questioned, the Brahmin replied, “Lord Krishna, the owner of the millions of universes became a simple charioteer out of supreme love for His devotee, Arjuna. Such compassion”!

Yet another incident demonstrating the Lord’s immense compassion is the ‘Kaliyamardan’. Kaliya, the thousand-hooded serpent, once poisoned the Yamuna river. When the cowherds of Vraja were out pasturing their calves on the wooded banks of the Yamuna, they happened to feel thirsty and not knowing that the water of the lake had been poisoned by Kaliya, drank of its water which resulted in their instantaneous death. On being apprised of their plight, Krishna came to the spot and restored them to life.

Thereafter Krishna entered the river, climbed up the hoods of Kaliya and danced in an infinite variety, crushing the towering pride of the myriad-hooded monster. Kaliya was found tottering towards death when his wives came out of the lake and with palms joined in prayer begged Krishna to spare the life of their husband. The prayers of the wives of Kaliya moved the Son of Nanda who spared the life of Kaliya who was asked to betake himself to his original home in the island of Ramanaka. The merciful Lord also gave him his assurance that Garuda would now do him no harm, as he would respect the print of His Feet on hoods of Kaliya. Such is the compassion of the Lord!

When the Lord went to Hastinapura as a ‘Shanti doot’ of the Pandavas, the Kaurava prince, Duryodhana invited ShriKrishna to his palace to partake of the most delicious food. However, Krishna refused and instead went to Vidura’s humble dwelling where he ate simple food, yet was extremely happy about it. Duryodhana had everything, had all the luxury but didn’t have bhakti. Whereas Vidura, in his simplicity & humility, was full of love. This exemplifies the Lord’s infinite compassion to his true devotees.

Sudama was a childhood friend of Shri Krishna. Sudama was born in a low-income family, while Krishna was from a royal background. However, Lord Krishna did not allow the difference between their status to come in the way of their friendship. After their education got completed, they got separated. Sudama and his wife had a poverty stricken life, while the Lord became the king of Dwaraka.

At the repeated insistence of his wife, Sudama went to Dwaraka to seek his friend’s financial assistance. Since he did not wish to go empty-handed, he tied some beaten rice in a piece of torn cloth to gift Krishna. When the Lord learnt of Sudama’s arrival, he ran to the gate leaving

Everything and welcomed Sudama with a shower of flowers with much love. He washed Sudama’s feet with his own hands and offered him his own seat. He put him on the throne. And then the all-knowing Lord playfully asked his friend what he had brought for Him. Sudama tried to hide the beaten rice out of shyness, however the Lord grabbed hold of it and went on stuffing it in his mouth with full glee! And when Sudama returned home, he found his humble dwelling completely transformed into a magnificent palace, filled with opulence! Such is the Lord’s compassion to his devotees! He regards as abundant even the smallest gift offered by his devotees in pure love, as penned in the following verses from Shrimad-Bhagavatam (Canto 10, Ch. 81, Text 4):

Indeed, the Lord is the supremely compassionate reservoir of all transcendental qualities!

There was once an elephant named Gajendra who lived in a garden located on Mount Trikuta. Gajendra ruled over all the other elephants in the herd. One day as usual he went to the lake near by to pick lotus flowers to offer prayer to the Lord. Suddenly, a crocodile living in the lake attacked Gajendra and caught him by the leg. Gajendra tried for a long time to escape from the crocodile’s clutches. All his family members, relatives and friends gathered around to help him, but in vain. The crocodile simply would not let go. When they realized that ‘death’ had come close to Gajendra, they left him alone. Gajendra called to the Lord to save him, holding a lotus up in the air as an offering. Hearing his devotee’s call and prayer, the Lord rushed to the scene and decapitated the crocodile. Thus through the boundless compassion of the Lord, Gajendra’s life was saved!

Parikshit, the grandson of Arjuna, was first killed in his mother’s womb by a Brahmastra (the ultimate weapon/missile) directed towards him by Ashwatthama – the son of Guru Dronacharya – during the Mahabharata war at Kurukshetra. Lord Krishna stepped in and extended cover to save Uttara’s womb and its fruit from the attack by Ashwatthama. He used the Sudarshana to neutralise the effect of the Brahmastra to protect the embryo in Uttara’s womb and gave it life through his yogic powers.

A story goes that once Lord Krishna came to visit the sacred saint Pundalik, who was busy attending to his parents. Though he knew Lord Krishna had come to see him, he refused to pay his respect to the God before his duty towards his parents was done.

He, however, threw a brick outside for lord Krishna to stand upon. Impressed by Pundalik’s devotion to his parents, Lord Krishna did not mind the delay. On the contrary, the compassionate Lord kept standing on the brick while He waited for Pundalik. When Pundalik came out and begged God’s pardon, Lord Krishna, the reservoir of compassion, replied that far from being displeased, he was pleased with his love for his parents. Lord Krishna then ordered him to worship Vithoba, or God who stood upon a brick. Such is the Lord’s mercy towards his true bhaktas.

Most compassionate of all is the divine gift which the Lord gave to entire humanity in the form of The Bhagawad Gita – a transcendental knowledge of the most profound spiritual nature. The merciful Lord gave a divine discourse which has become the most popular and well known of all the sacred scriptures from ancient India. Always being revered as a true source of spiritual knowledge, it reveals the purpose and goal of human existence.

“Out of mere compassion for them, I, dwelling within their hearts, destroy the darkness born out of ignorance by the luminous lamp of Knowledge.”

When the darkness of ignorance is destroyed by the luminous lamp of knowledge, the self stands revealed in its own glory. This act of self-revelation is undertaken and performed by the Lord in a spirit of compassion. However, we earthly mortals need to know clearly that this compassion cannot be directly invoked unless we endeavor to remove from ourselves all veils of ignorance which are nothing but our own mental agitations caused by the cloudiness of our intellect. As our humble gratitude to the Lord for the gift of the Gita made out of infinite compassion to humanity, let us endeavor to bring about a synthesis of both our spiritual knowledge and selfless love through our service to mankind and readiness to sacrifice to our best ability.

Instances of compassion showered by the Lord are countless – that showered on the Devas, on the Pandavas, on the Gopis, on devotee Ajamilan, on Bhakta Prahlada, on Prince Dhruva, on Mirabai, on Sakubai, on Mother Earth……………the list is endless! The Lord’s compassion is indeed boundless!

This essay is but a small attempt to list few instances from the Lord’s countless acts of compassion – even this would have not been possible without the blessings of the compassionate One!

[1]Translated as compassion, the experience is best described as a highly emotional state where one’s ‘’heart melts’’ and the devotee and Krishna experience complete oneness. It is very similar to the experience of  bhaktior devotion that the devotee feels towards Krishna.

[2]A form of discipline where the devotee adheres to a set of practices in order to attain a goal.

“By regularly hearing, chanting and meditating on the beautiful topics of Lord Mukunda with ever-increasing sincerity, man attains the divine kingdom of the Lord, beyond the realm of death. For this purpose, many persons, including great kings, abandoned their mundane homes and took to the forest” – Srimad-Bhagavatam

The essay competition on the occasion of Janmashtami is our sincere endeavor to harness the Kirtana and Sravana forms of Bhakti by encouraging authors to pen articles exuding Bhakti and thereby affording the highest spiritual bliss to our readers.)