Shri Jagannath In The Month Of Kartika: Radha Damodara Besha 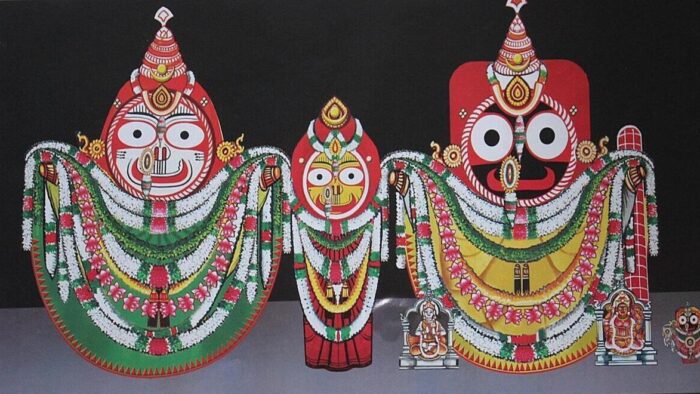 As per the Puranas, the month of Kartika is considered the most pious of all the Hindu months. It is mostly revered with dedicated worship by the Hindus to Goddess Lakshmi and Shri Vishnu.

Any offering or Vrata done during the month of Kartika is said to yield the best and maximum results. Post the full-moon day of the month of Aswina famously known across India as Sharat Purnima and popular in Orissa as Kumara Purnima, up to the next full moon on Kartika Purnima, the entire period in between is marked as the holy Kartika Masa in the Odia calendar.

In the Jagannath temple at the Moola Dham in Puri, the month of Kartika brings into the Srimandira a lot of hustle-bustle and some special rituals. At the temple of Shri Jagannath, the Trinity is all set to give a glimpse of their special wardrobe by showcasing six important Besha / Veshas during the Kartika month and the bonus addition of Nagarjuna Beshas this year.

The month of Kartika is also known as the Radha Damodara Masa-month, dedicated to the amorous Rasa Leela of Radha and Krishna. Damodara is another name for Shri Krishna. 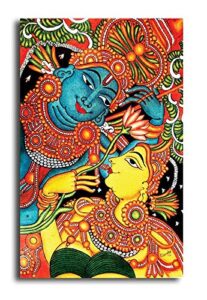 In the Srimandira, Shri Jagannath gives an audience to his devotees as Damodara along with his childhood love interest Shri Radha. Shri Jagannath appears in the ‘Radha Damodara Besha’ for the first twenty-five days in the Kartika month.

Meaning: O Supreme God, I offer my sincere prayers to You. O Damodara! O Ananta ! O Vishnu! O Master! O my Lord, be pleased upon me. Please keep showering Your glance of mercy upon me.  Deliver your grace on me, your poor ignorant foolish devotee,  who is immersed in an ocean of worldly sorrows. O God! Become visible to my eyes.

This Besha was introduced in the Srimandira in the 12th century and thereafter the love tales of Shri Krishna and Shri Radha became famous and accepted throughout India.

Some researchers are of the opinion that the Radha Damodara Besha was introduced by Shri Chaitanya Mahaprabhu in the 16th century.

Shree Jagannath is considered a composite figure of both male and female combined in one. He is also the representative of Shree Radha and Sri Krishna. This spirit has been discovered in Radha Damodara Besha.

The Lore Of Rai Damodara

Yet another lore related to the Radha Damodara Besha introduces us to Rai. According to the story, one day the Bada Panda– the chief servitors in charge of the rituals of the Holy Trinity, invited Shri Jagannath to his house. Shri Jagannath accepted the invitation of His servitor and paid a visit to his house.

The Bada Panda had performed the Sraddha ritual for his forefathers and had cooked special food. The Bada Panda and his wife humbly offered Shri Jagannah the food with extreme dedication. Shri Jagannath accepted the food offering and was very pleased with the hospitality of His servitor.

One day Shri Jagannath, knowing about food cravings during pregnancy, asked the pregnant Rai if she desired to eat something special. Rai quickly replied that she desired to sit on His lap and receive worship alongside. She also expressed her desire to relish coconut, banana, sprout, khai-parched paddy, Nadia kora –coconut ladoos, and all the goodies that were offered as prasad to Him.

The Goddess was extremely impressed by the sincere and dedicated worship of Rai and offered her a boon. Rai asked for Damodara. Goddess Lakshmi was taken aback. She was disturbed and felt helpless, but she had to grant the boon.

Rai satisfies her food cravings by partaking in the Ballava and the ‘Baala Dhupa’- the food offerings made to Shri Jagannath during this period. These twenty-five days from the Aswina Sukla Ekadasi to Kartika Sukla Dasami the devotees chant ‘Jaya Radha Damodara Govinda’, in praise of Shri Radha and Shri Krishna’s companionship.

Meaning: O Lord Damodara, my prayers to you and to the radiant sacred rope which binds Your belly. I then offer my prayers to Your belly, which is the abode of the entire universe. I humbly bow down to Your most beloved Srimati Radharani, and I offer all prayers and gratitude to You, the Supreme Divine, who displays unlimited pastimes.

Post the twenty-five days as Radha Damodara, on the day of Kartika Ekadashi that is the twenty-sixth day, the Deities adorn a new costume. This look is popularly known as the Thia Kia Besha or the  Lakshmi Narayana Besha.

This new outfit and décor of Shri Jagannath and His siblings also confirms His return to Goddess Lakshmi bidding Radha Rani adieu for yet another year.

In Radha Damodar Besha, Lord Shree Jagannath and Lord Shree Balabhadra are put on the Trikachha. The attire has a combination of silk, gold, flowers, and some handmade special accessories.

They also hold a pair of golden Nalibhuja – Pipe like coverings in their hands. The Chula-hair made out of bamboo and fabric is placed on the Trimundi. Thereafter the Chandrika is placed on the Chula completing the cranium decoration.

The Deities are decorated with different types of gold ornaments such as Ear-Rings on the ears, Odiani on their waist; Tadaki, Chandra, Surya, Chita on their foreheads and necklaces. They are also ornamented with flowers.

In the subsequent period another Bhoga namely ‘Bala Dhupa’ was added to this Besha. Bala Bhoga offerings are made in Sri Mandir from the eleventh day in the bright fortnight of Aswin to the Full moon day of Kartika. As per folklore, the special bhogo was introduced by the Gajapati Maharaja (King) of Puri. 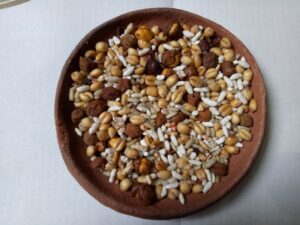 Bala Bhogo derives its name from the word Bala -meaning hair. As per the legend, once the King of Puri found a string of hair in the garland adorned by Shri Jagannath.

Gajapati Maharaja was amused with the answer but did not believe Taliccha Mahapatra. The Maharaja of Puri in order to satisfy his curiosity went on to the extent of checking it on the Lord’s head. Upon seeing some strings of hair, the king started pulling it to verify if it was original.

To his utter surprise, blood drops dripped from the Lord’s head. Seeing this king was astonished and regretted his act. He apologized to Shri Jagannath and the servitor for the grave mistake he had committed. The King returned to his palace feeling like a sinner with resentment.

At night, Shri Jagannath appeared in Gajapati Maharaj’s dream and ordered him to begin a special Bhog by the name Bala Bhoga (Hair Offerings).

Jagannath Sanskruti is unique and so are the rituals. The intent of these rituals is to give acceptance to all and be accepted by all. This universal acceptance makes Shri Jagannath, the true Lord of the Universe.

The goal is to raze the heaviest self nurtured burden-ego. The Radha Damodara Besha signifies the spirit of love and devotion. It elaborates the power of dedication to create a passive and undisputed understanding of sharing, spreading, and celebrating love.

Note: This year due to the prevailing Covid-19 pandemic situation, the Radha Damodara Besha and the Kartika Masa rituals at the Moola Peetha of Shri Jagannath at  Puri Dham is being done without the participation of devotees.