The Return of Aesthetics Part VI 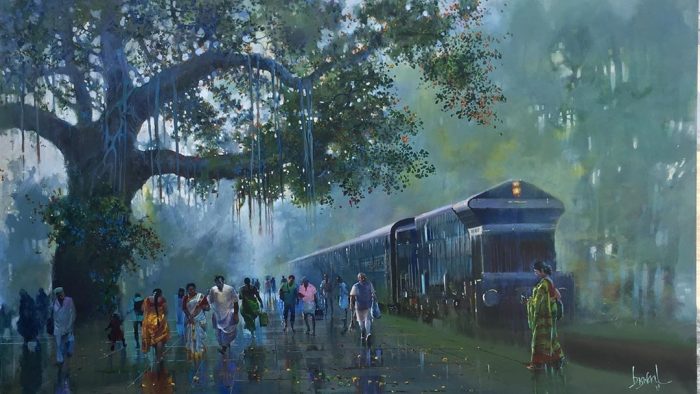 In the previous five articles, we saw how the introduction of the artist in the art led to its ultimate degeneration leading to modernist and postmodernist art. This happened due to the destruction of meaning and purpose in the post-Enlightenment world. The divine inspiration had already been eliminated after the Judeo-Christian conquest of Europe two centuries ago.

In this concluding article of this series, we will observe a curious phenomenon of the 21st century. The aesthetic in art is returning and in some ways the nameless artist is also making a comeback. This phenomenon is to be witnessed everywhere.

The 21st century is marked more than anything else, by the arrival of internet. It is everywhere and in everyone’s lives. No other technology or idea including terrorism has affected our lives as much as internet has. It is the meta influencer which is behind every cause and every change that is rocking our lives in this tumultuous century.

Breaking the Monopoly of the Art Galleries

With the arrival of the internet the very nature of art changed. The first great change that it brought is the breaking of the stranglehold of art galleries and the syndicate of art connoisseurs. In the 20th centuries, under the influence of modernist and postmodernist ideologies art had become so abstract, ugly and contrary to commonsense notions of aesthetics that the only place where this ‘art’ was appreciated was art galleries.

As prevailing ideologies dictated that ‘judging art’ was a plebeian act and nothing less than pure evil, there was no way for any art critic to criticize an ‘art piece’ or art installation for the ‘art installation’ had to be seen with an inner eye and according to its own logic. In layman terms this meant that the artist could create any nonsense he wanted and there was no way he could be criticized for that.

Second, it was argued that there is no inherent meaning in anything let alone art. Meaning, beauty and aesthetic value are ‘created in the act of witnessing the piece of art installation’. This meant that anything could be interpreted as great art and all interpretations or non-interpretations would be correct. In layman terms art had become meaningless pieces of nonsense.

In this case, how to decide whether a piece of art is important or not?

A syndicate of art critics and artists had been created. Wealthy businessmen wanting to launder money would open art galleries or finance art exhibitions and installations at famous museums and institutions. A very small caucus of these influential people would create an insider group which would decide what was good art and not. As the criteria of deciding good art had already all been dismantled, no one would be able to object to their selections. Neither the included could be questioned, nor could the excluded appeal. For it all depends on the inner eye of the small caucus of art critics and artists in the elite.

This has resulted in a total exile of the beautiful and the aesthetic from mainstream art. ‘Mainstream art’ is now nothing more than ideological statement or a way to launder money. But with the coming of the internet, this stranglehold of the ‘mainstream art’ on the art scene of the world changed.

Internet and the New Platforms of Displaying Art

Internet provided a platform to millions and millions of artists, photographers, painters, sculptors, singer, dancers and various other kinds of artists to display their work on a free platform to the entire world, and not care about the ‘art critics’. For the first time in about a century, ideology stopped playing a part in deciding what was good art and not. For the first time in a long time, beauty and aesthetics once again came into play and the view of the audience was taken into account.

Audience and its opinion are not considered plebeian on these channels and the more popular art is generally the one which follows at least the basics of the universal rules of aesthetics. This is obviously not a utopian scenario where the best come at the top, but at least the caucus of art critics is broken and those who are famous do follow the fundamentals of aesthetics.

With the coming of social media platforms like Facebook and Twitter, people had started sharing beautiful natural landscapes all around the world, displaying the magnificent beauty of Mother Gaia in all its splendor. With the coming of Instagram on the scene, this trend increased manifold. True the majority of pictures on these platforms are mostly horrible selfies, but there is no dearth of millions of breathtakingly beautiful landscapes which enthrall the audience on these platforms worldwide.

The encouraging trend on these social media platforms is the reinstatement of the aesthetic principles. With no friendly art critic and small caucus to certify the ‘artistic quality’ of a photograph or a painting on Instagram, the only option left for the artists to fall back on is: aesthetics. The photographers and the artists try to make their photographs as beautiful as possible.

They try very hard to follow all the classical rules of landscape photography in order to click a great photo of a natural beauty like the Grand Canyon; and follow all the classical rules of portraiture while clicking a beautiful portrait. As a result, while the ‘traditional photography’ which went into an ideological overdrive is producing all sorts of awkward, dark and sometimes downright ugly photos, these nameless artists on Instagram, Twitter and Facebook are creating some truly beautiful and soothing pictures.

Same is true with painting. While painting as a discipline was all but destroyed as explained in the previous articles, on internet we see a return of the beautiful, the meaningful, and the comprehensible in painting. Great water color artists are producing breathtakingly wonderful portraits and landscapes which are outdoing some of the great masters in the classical age of painting.

Pen and pencil sketch artists are creating vectors which are on for free display on social media platforms and also for sale on various media platforms. Oil painting and other genres and techniques are also creating beautiful pieces of art which follow all the classical rules of painting and are still beautiful and artistic enough to stand out from the crowd.

The competition on internet is truly fierce. It is not completely a level ground, but it is possible for beautiful pieces of art following the good old principles of aesthetics to get at least considerable reach and fame. This has fostered self-discipline and rigor in the artists who develop and hone their crafts and skills as much as they can to produce good art. An additional demand of extreme regularity on these internet platforms means that rigor and discipline is even more of a feature of these artists, who know that they will lose interest of their audience if they do not produce good art regularly.

A Holistic View of Aesthetics

Coomaraswamy believed that in traditional societies like India art was not seen in separation from life. There was no art for art’s sake. This does not mean that art for utility’s sake that was the communist argument was true. Far from it. Coomaraswamy discarded that from the outset, but he also exposed the inherent falseness of art for art’s sake argument.

A culture society believed that everything that is created should be made beautiful. The function of utility and beauty were not divorced from each other. The debate which has wracked the art world of the West for the past few hundred years the debate between ‘Art for Art’s Sake and Art for Utility’s Sake’ was non-existent in India because of this approach. (Coomaraswamy 97-98)

This is making a comeback in real life but through the agency of internet. Handicrafts are making a comeback as they are able to find niche markets through the internet again. Once the market had forced them to bow down to industrial produce but now they are able to survive. The beauty aspect of everything we create, including food is now stressed, though it is sometimes taken to the extremes to the detriment of health.

In an another curious phenomenon, once again made possible because of internet, good songs are recreated by thousands of artists all over the world in what is now called ‘covers’ and released on mediums like YouTube. These are unabashed recreations of a famous song and in most of these ‘covers’ the song is faithfully reproduced and sometimes it is tweaked just a little bit without actually destroying the core of the song. The principles of melody and harmony are not violated.

It is an implicit acknowledgement of traditional principles. That the best music is replicated by various artists without any urge for ‘innovation’. The aim here is to approximate to the traditional art and not create something strange. Individuals artists do get famous through this but all they do is to recreate the classical or famous songs extremely well. In these recreations not only the modern songs are recreated but classical music, stotras, mantras, symphonies and chants are also recreated.

Similarly, individual artists with scarcely more than one or two actors and virtually no equipment are creating really interesting dramas and stories with social commentary on current affairs on one hand and universal problems on the other. These artists are ensuring that return of the story and the plot in the narrative. The traditional art with its various postmodern shenanigans had destroyed the plot and the story in drama and in much ‘artistic cinema’. But through internet this is also making a comeback. People are once again developing a holistic view of aesthetics.

In photography, videography, music and painting the return of the beautiful is quite evident. The return of the nameless artist is also getting facilitated in this age of internet. Though individual artists do get famous, but their fame owes to the replication of great art already created and not creating something new every time.

This is in no way a plea for just recreating great rat. Innovation is also the soul of the art. But overstressing innovation after the introduction of the individual artist had sent art on a tangent so out of shouting distance that all the universal principles of art had been violated. What the current trends facilitated by internet is doing is to encourage the return of the beautiful to art. The balance between universal principles and innovation is coming back.

In the field of architecture, the case is different for obvious reasons. However, traditional architecture which is region specific is now once again creating a niche market as pictures of these traditional homes and the calm and serenity that they exude are widely shared on the internet social media platforms. While the poor and the middle class have no choice but to go with the market created homes, the rich are increasingly choosing traditional architecture over modern architecture.

These are but a few trends in the modern world. Though these trends are encouraging some opposite trends are also to be seen and cannot be ignored. And while the beautiful and the aesthetic has returned to the art, and the nameless artist is also making a comeback, the return of meaning is still awaited. Not that there is no meaning in the art that is being created now but there is a lack of a spiritual core.

(This article is part of a six part series. Read more here: I, II, III, IV and V)