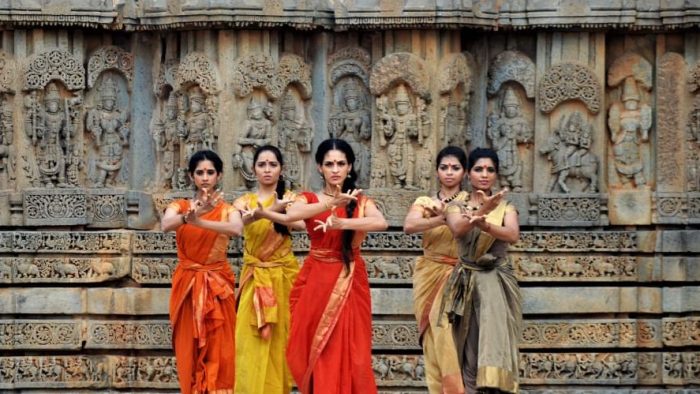 Participate in a 1000 km car rally through the heartland of Karnataka, with pit-stops at Hoysala temples, fuelled by dance and music, with the Heritage Trust and Indica.

Creative ideas are often incubated over a long period of time. Sometimes, the seeds are sown in our childhood under the big banyan tree we call Sanatana Dharma. In some they are rarely revisited, in some they form an unconscious part, in some they burn with a fervour others can’t miss.

For Vijayalakshmi Vijayakumar, founder Heritage Trust, getting a flying license before the age of 20 was as meaningful as performing Bharatanatayam on stage. Several decades later, last year, she along with the co-founders of Heritage, dancers Supriya Komandur and Rekha Raghavan, participated in the Times Women’s Drive 2018 from Bangalore to Goa. The all-woman team called TriShakti enjoyed the drive, but wanted to create their own Time/Speed/Distance (TSD) motor rally with temple and heritage stops. Seven-time Indian National Rally Champion B S Sujit Kumar is on board to bring the rally experience.

First the temples are selected and then the technical partners Buxus ProSports fixes the route according to the parameters in a TSD rally. The first drive was to Hampi with 50 cars participating. The second was to Kedareswara, a little known temple in Karnataka and the September drive is a Hoysala Trail. 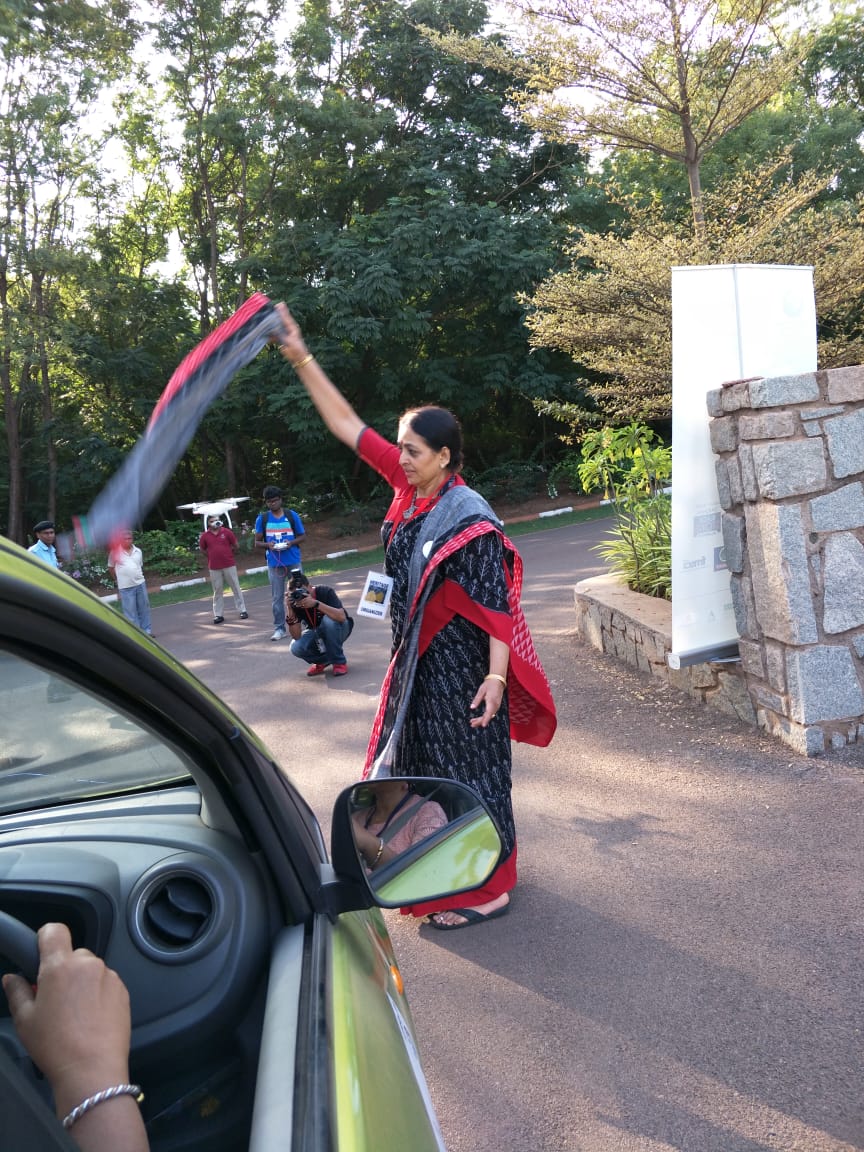 This year’s drive, a 1000 km car rally through the Karnataka heartland will be held between September 20 to 22. It will include Hoysala temples between Bangalore and Shimoga on Day 1 (Horakere Ranganatha Swamy temple and Amrutheshwara Amruthapura temple), Shimoga and Mysore on Day 2 (Koodli/Lakshmi Narasimhaswamy Temple, Bhadravathi Veera Narayana Temple Belavadi, Hoysaleswara Halebidu, Kedareshwara Halebidu, Lakshmi Devi Doddagaddavalli, Lakshminarayana Temple Hosaholulu, Saumyakeshava Temple Nagamangala temple) and Mysore to Bangalore on Day 3 (Nambi Narayana Swamy Temple Thondanoor, Chelluvanarayanaswamy Melukote, Mallikarjuna Temple Basaralu).
The drive will include stops to take in performances in some of the temples. “Performances in haloed spaces have a different appeal and the energy in these spaces are healing too. The inspiration to connect to one’s self is heightened by the atmosphere in the temple. The arts are a great channel for this whether for the artiste or the audience and the physical and material distance is reduced in the temple ambience so the experience has greater impact,” says Vijayalakshmi. There is a talk giving information about the temples and a quiz administered to the participants every day. In addition this year, participants have been invited to submit an essay on their experience. 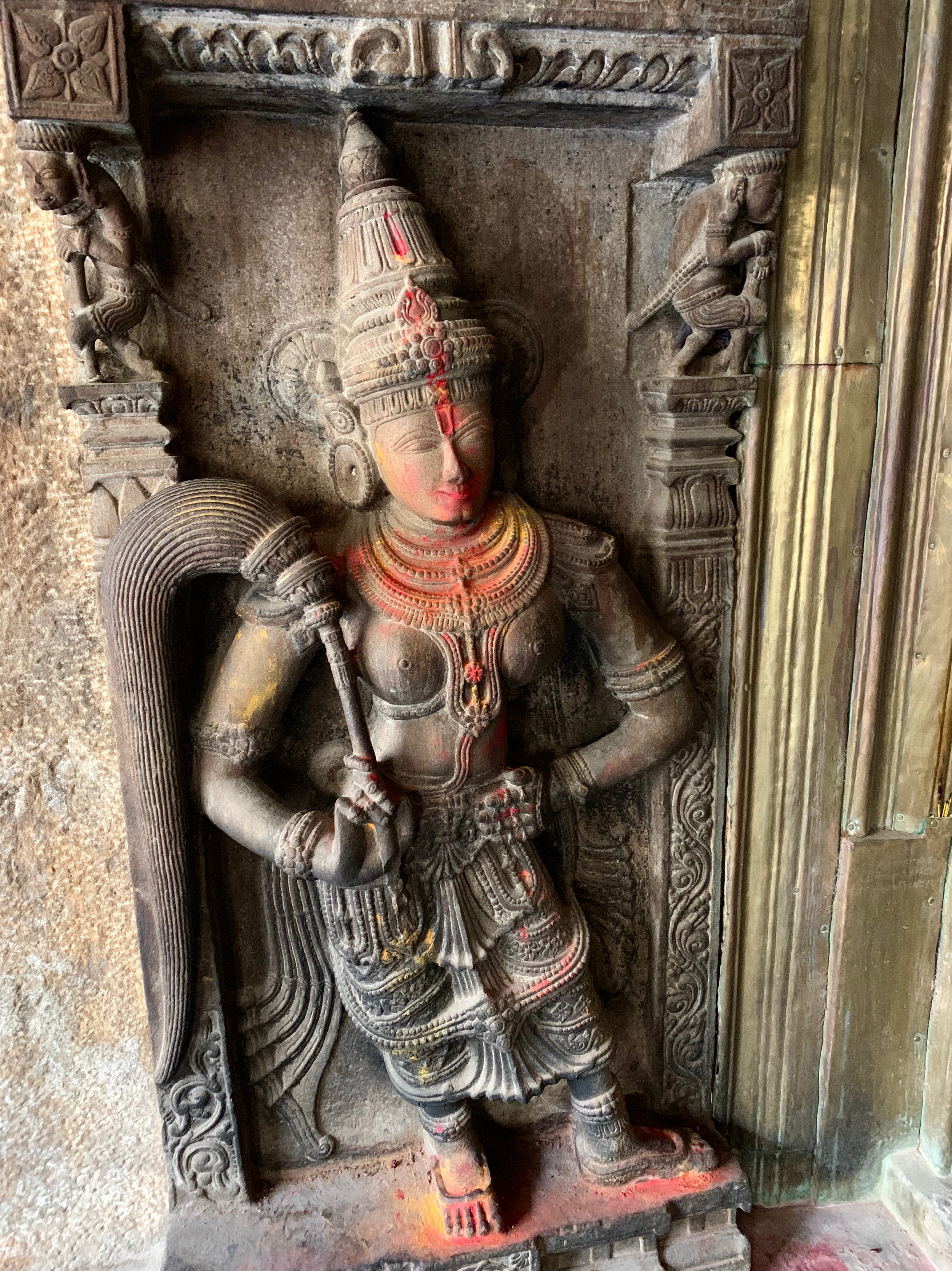 Vijayalakshmi’s deep cultural roots go back to her maternal grandfather who served in the Mounted Infantry in the 1st World War but was steeped in the Ramayana and also nurtured in her a deep love for plants. “Our heritage is strongly connected with nature, like the sthala vrikshas or the Nandana vanas that our temples had. In the rally, participants will disperse seed balls, where the seed has been wrapped in soil material which keeps it safe till it can safely germinate,” says Vijayalakshmi.

Seeds of trees native to India including mango, jackfruit, nerale, lemon, champaka, nagalinga pushpa, honge, arali, audambara and neem are being prepared for dispersal along with the students of BNMIT. Plastic bottles and other non-degradable items are not permitted and participants have to wear hand-woven cotton clothes. For the drive, the trophies and mementos are hand crafted, special stoles are made from handloom cloth and for the September 2019 drive even the logo on the stole is hand painted. The menu’s for all meals are personally curated – vegetarian and nutritious. 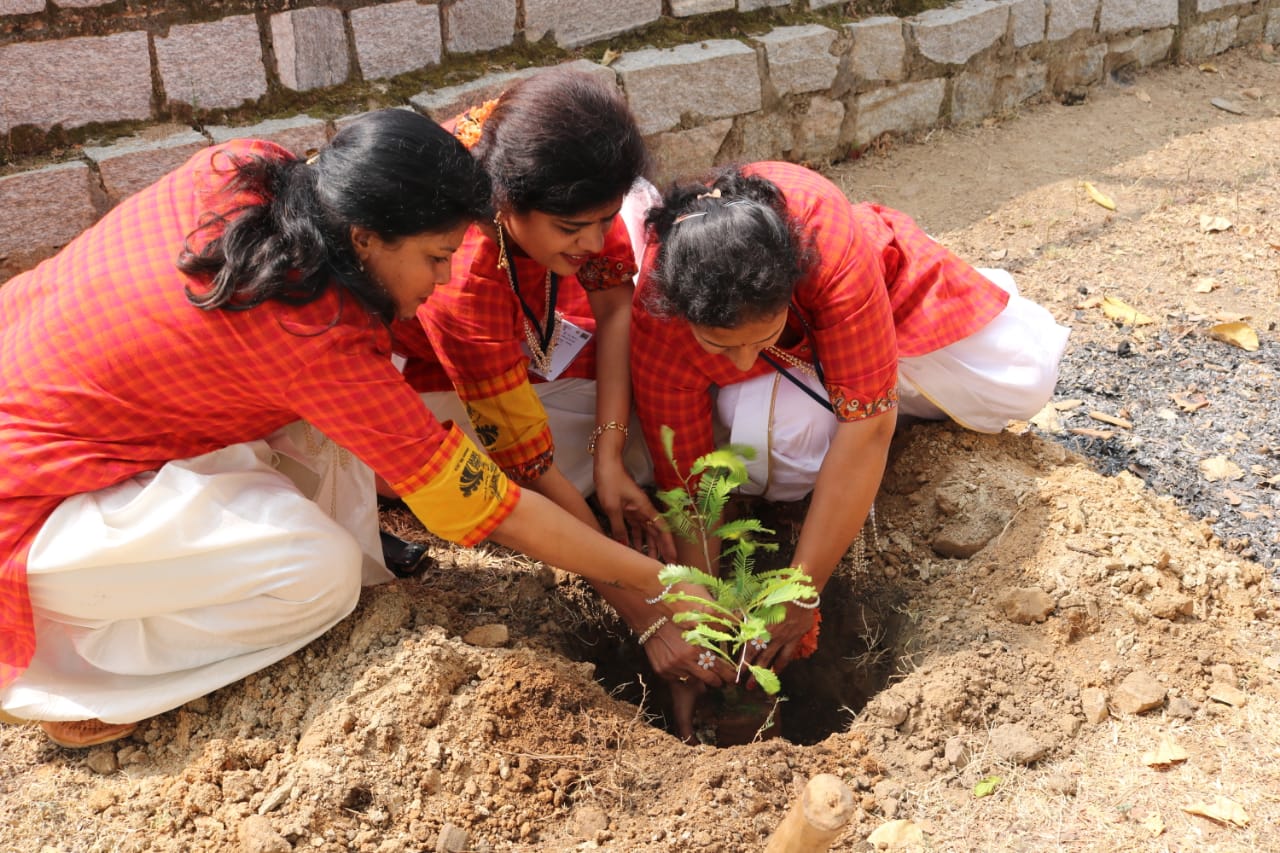 Caring for the environment is an intrinsic part of Indian heritage and culture, but as Vijayalakshmi puts it, “we have just lost that connect. Relating music and dance to themes related to nature are natural for traditional Indian arts. There are so many songs that allude to natural heritage. The poetry and lyrics of our music are replete with references to various aspects of Mother Nature. We have Gods like Ganesha who has an elephant face or an Anjaneya, or Nandi and for that matter all the Divine Vahanas are animals. There are trees that are sacred and we worship the elements. Hence bringing this connect back is easy and important.”

Heritage, the organisers of Gudiya Sambhrama and Srishti Sambhrama cultural festivals in Bangalore, are trying to revive the temple ecosystem as it existed in the past. “Traditionally our temples had a major role to play in the eco-system of our communities but sadly their role has now shrunken in most cases to only fulfilling religious and ritual roles. There was a time when most important activities happened within the precincts of temples that were large and spacious. Temples had their own gardens that had ecologically important trees and plants, and the temples owned abundant fertile lands which were given to farmers to cultivate, boosting the economy,” says Vijayalakshmi.

Apart from her family, Vijayalakshmi says that her passion for culture was inspired by Swami Chinmayananda, Swami Dayananda and Andavan Swami who was the head of the ashrama in the late 70s and 80s, other Swamijis of the Chinmaya Mission and now Swamini Swatmabodhananda.

From the age of three she was taken along with her siblings to all the lectures by Swami Chinmayananda and as she grew up she was active with the work of the Chinmaya Mission running their Yuva Kendra classes for almost two decades.

“My parents encouraged learning in any field, so I played sports, went to spiritual talks in English, went to the Andavan ashram which is steeped in tradition, learnt music and dance, a bit of violin and later some sitar too,” says Vijayalakshmi. Not one to sit still for a moment, today she is the Director of the Center for Soft Power, curator of Bangalore’s iconic Gudiya Sambhrama Festival and also helps with her husband Vijayakumar’s Madhavi Farms – India’s first and largest aquaponics farm.

There was a time when her family was shunting between India and the US, until Swami Chinmayananda told them to return to India permanently. His influence is evident in everything she does and says. “ I remember when Swami Chinmayananda once said that there should always be an element of surprise and ideas should be creative and fresh for them to find a connect with people. So I have tried to pay attention to every little detail with a creative mind. As a family (her daughter Rukmini Vijaykumar is an internationally renowned Bharatanatyam dancer and actress) we realise that our arts – visual and performing – have to be supported in this fast paced life.”

Over the last 10 years, Gudiya Sambhrama has seen that when the performances take place in temples the art becomes more accessible to a wider cross section of society, kindling an interest to know more. “During the drive, the distance is furthered narrowed between the art and the audience. We plan on having artistes travel with us, so that the dialogues keep happening. This helps both the audience to have a better understanding and also for the performer to make changes within the framework for greater assimilation by the audience.”

For Vijayalakshmi, the drive is as much a cultural experience as it is spiritual. “To me a temple represents a place where the Universal formless Being manifests in a form, enabling the limited human being to communicate and relate within the framework of Nama and Rupa. Many are the philosophies, many are the Gods, many are the texts, festivals, rituals and paths in Sanatana Dharma and the temple encompasses all of this in one space. In the past, they were very powerful social institutions around which the community functioned, centering life around divinity – whether the activity was secular, religious or spiritual. For example there is a unique festival in South India called Aadiperukku, the Aadi monsoon festival. The festival pays tribute to water’s life-sustaining properties, seeking blessing for mankind’s peace, prosperity and happiness. Nature is worshipped in the form of the Devi. This is such a beautiful festival which can give visitors a peep into what the Dharma of our country is.” 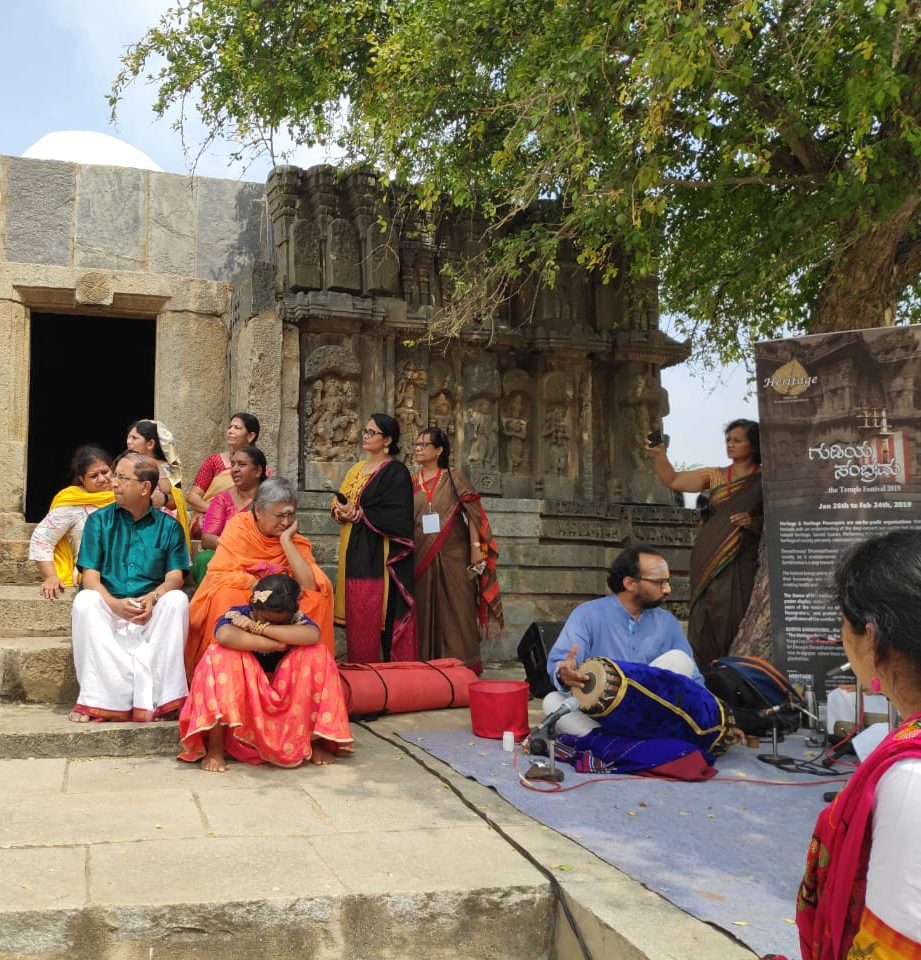 Gudiya Sambhrama’s next festival themed ‘Ramayana Navaham’ aims to create a nation-wide celebration of the epic and its undiminished glory. The public has been invited to submit songs based on Rama or the Ramayana, dance pieces, poems, photographs and illustrations, literary pieces all of which are being put up on social media every week until the festival next January.

The Royal descendants of India have been invited to participate in this event. Maharaja Gajsingh II of Marwar-Jodhpur will be holding an exhibition at the royal museum at Mehrangarh Fort, of the Royal Jodhpur Collection of Ramayana paintings to be curated by one of India’s leading cultural institutions – the Mehrangarh Museum Trust. The royal family will also be performing a Shastra Pooja during Dussehra and Ramnavami celebrations as part of the event. The Maharaja Man Singh Pustak Prakash and Chopasni Shodh Sansthan in association with Oriental Research Institute will organise an exhibition of Granth/manuscripts and a lecture/seminar. The Veer Durgadas Rathore Smirti Samiti and INTACH Jodhpur will organise a Ram Leela, a diminishing traditional art to mark the festival.

This summer, Vijayalakshmi opened her doors to children and their parents to readings from the chapters of the Ramayana, conducted by Swamini Swatmabodhananda and is hosting Ramanaya Parayanam with readings of the Sundarakandam every Tuesday. Every day, before she sleeps, she colours mandalas, and listens to Srimad Bhagavatam, Ramayana by Sri Nochur Venkatraman, Vedanta talks by Swami Dayananda Saraswathi or Swami Paramarthananda or reads writings by Swami Chinmayananda. Sometimes, she listens to classical music or Vedic chanting, content in the knowledge, as her guru Dayanand Saraswati said, “Brahman is not limited by any periods of time. Whatever point of time you conjecture, Brahman does exist at that time. It was there at the time of Rama, it is there now and it shall be there even tomorrow.”