Namakarana Samskara – The Rite of Naming a Newborn 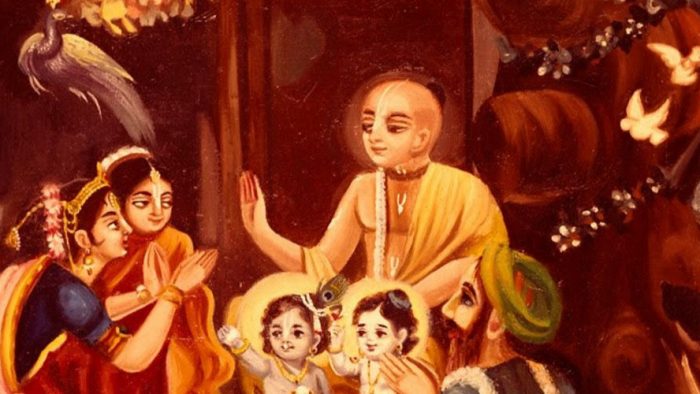 In an earlier series of articles we had looked at the concept of samskaras in Sanatana Dharma, their significance and enumerated them. We had also looked at the Upanayana samskara, one of the most important samskaras for an individual and the associated Upakarma ritual.

Amongst the numerous samskaras that adorned an individual’s dharmik life, only a few still remain in practice. The Upanayana and Vivaha(marriage) samskaras continue to be practiced in most traditional households. Along with them, it is the ‘Namakarana’ samskara that still remains in practice to a reasonable extent.

Namakarana is a samskara whose main purpose is to provide an identity to an individual. It is the initiation of the recently born child into the wider world by giving him or her a name, which the society shall recognize and interact. Most of our shastra granthas that go into the details of Namakarana focus on the constituents of the ceremony and the rules around it. Very few of them actually address the question of why a separate samskara is needed to give a name to an individual. Why not just grant the child a name and be done with it?

The answer, however, is found in the Shankha Smriti. The Sage Shankha succinctly states the purpose of the Namakarana.

“The father or the elder in the family must initiate the connection (of the child) with the kula, the devatas and the nakshatra”

The name of an individual must help reminisce the connection with the family or clan from which he or she comes from. The name must remind people of something auspicious. It must help connect people with the Gods, so that the very act of calling out an individual’s name ends up being a pious deed. It must help easily understand the basic nature of a person, which is possible if the name is easily identifiable with the nakshatra in which the person was born.

Thus the purpose of the Namakarana samskara is to establish an auspicious and proper connection with the traditions of the family and community, and not leaving it to the whims and fancies of the people involved. The various distorted names that people possess today (gaga, bebo and so on) is proof enough that naming a person without conducting a samskara will lead to bizarre identities.

Timing of the Samskara

There is considerable consensus amongst the Smritikaras as to when the Namakarana samskara must be performed. Manu, Vyasa and Shankha Smritis state that the ceremony must be performed on the tenth or twelfth day.

“The child must be named on the tenth or twelfth day after birth. Auspicious tithis, muhurtha and stars must be chosen for this”

Since it is good to conduct this ceremony after determining a strong astrological muhurtha, Smritis have allowed considerable leeway in choosing the date. The eleventh day, sixteenth day or the eighteenth day is also considered suitable.

In case of contingencies, Vyasa Smriti allows conducting the Namakarana after one month, a hundred days, or even a year after birth.

Like stated above, considerable importance is given to choosing an auspicious day for this samskara. The following nakshatras are considered auspicious: Uttara, Revati, Hasta, Moola, Pushya, Ashwini, Shatabhisha, Shravana, Punarvasu, Anuradha, Swati, Mrigashira, Rohini and Dhanishta.

Care must be taken to see that the two auspicious planets Brihaspati and Shukra (Jupiter and Venus respectively) are in a trine from the Lagna. If possible, harsh planets such as Kuja, Shani, Rahu and Ketu must be in one of third, sixth or eleventh houses from Lagna.

Garga Smriti mandates that the Namakarana ceremony must be compulsorily performed during the first half of the day.

The Rules for Naming

Traditionally, a minimum of four names are given to a child during the ceremony. The first of these names is the ‘Kuladevata nama’ or the name of the family deity. For e.g. those whose kula devata was the Lord of Tirumala would name the child as Srinivasa or Venkatesha.

The second name is based on the lunar month in which the child was born. This typically means the ‘Masa nama’ would be one of twelve names of the God that the family believes in, each name corresponding to the form of the deity that presides over the month. As an example, the below table shows the names that a typical Vaishnava family would choose based on the month. 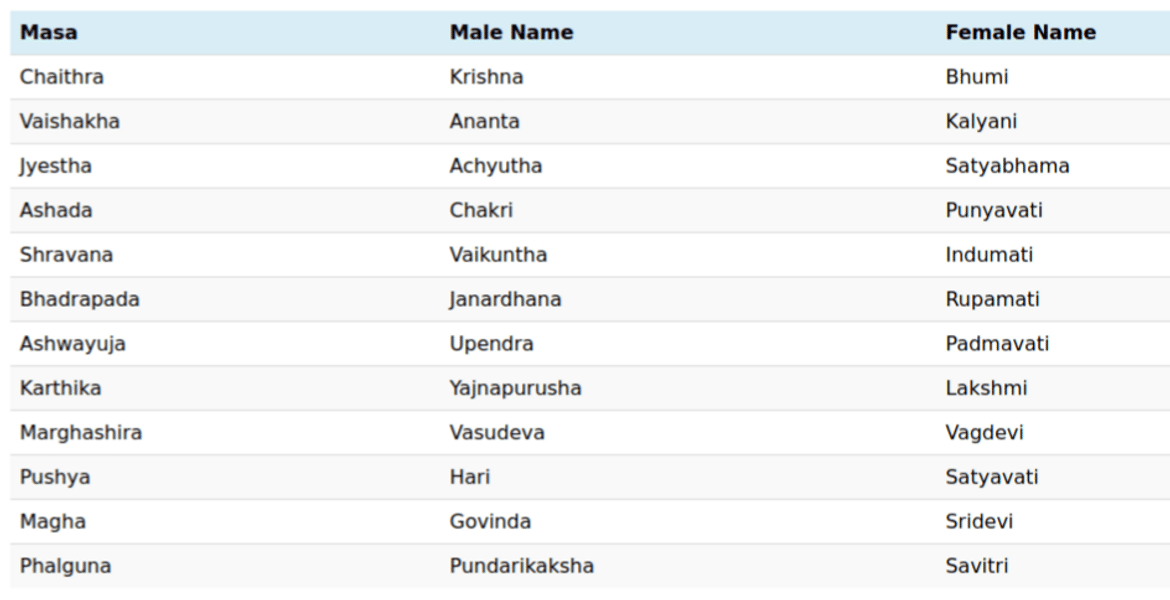 The third name is the ‘nakshatra nama’ or the name based on the star under which the child was born. Depending upon the nakshatra, the starting akshara/letter of the child’s name would be decided. The following is the classification:

The fourth name is the ‘vyavahara nama’ or the name that is intended for common usage. In today’s terms, this is the ‘official’ name.

Some families have the tradition of giving the child a fifth name which is the ‘rahasya nama’ or secret name, which only few close family members would know of.

For the ‘nakshatra’ and ‘vyavahara’ namas, shastras lay out some rules on how the names must be chosen. For a male child, it is preferable if the name contains 2 or 4 aksharas. However, if the names are good, even 5 or six aksharas are allowed.

For women, the emphasis must be on keeping names that are soft to hear and beautiful to pronounce. For e.g. Yashoda, Shanta, Manorama and so on. The names must not have even number of aksharas. If the name of a female child ends in “ee” then Shankha Smriti says that such a kula will become purified.

Another tradition that is followed in certain families is to name the child with emphasis on a certain quality that reflects the ‘varna’ of the family. This is very rarely practiced these days. Under this custom, Brahmin children are given names that indicate ‘mangala’ or auspiciousness, Kshatriyas chose names that indicate strength, Vaishya kids get names indicating wealth and the names of Shudra children indicate service.

The Namakarana is to be mandatorily performed by the father of the child. If the father is not alive, then an elder belonging to the same kula may perform the ceremonies. The doer of the ceremony must undertake a ‘mangala snana’ or auspicious bath before commencing the ceremonies. On the day of the Namakarana, the first activity is to lift the child from the bed used so far and place it on a new (alternate) bed.

The ceremonies are started by performing the punyahavachana which purifies the place and the performers. Next, in order to pray for the growth of the kula, the Pitrus belonging to the family must be pleased by offering them the Nandi-Shraddha. Those who can afford, and those who are interested, must also perform a navagraha-homa and please the nine grahas for safeguarding the child. Another homa is also performed in which oblations to Agni, Indra, Prajapati, Vishwedeva and Brahma are offered.

Next, a plate full of rice is kept in front and a kalasha is established on it. Using a piece of turmeric, the kula devata nama, the masa devata nama, nakshatra devata nama and vyavahara nama are written on the rice. The various devatas are then invited to preside over the rice and the kalasha using the ‘pratishta sukta’. A shodasha upachara puja is then performed to the kalasha. A few panditas are given fruits, tamboola and dakshina as per the capacity of the father and their blessings are taken.

After this, the father and mother both whisper the chosen names three times into the right ear of the child. Holding the child, the parents then take the blessings of all the elders present. Finally, food is offered to all the panditas and family and friends who have gathered.

The Namakarana samskara is a very important one that is performed in the early days of a newborn. The process of giving a worldly identity to a child is carried out in a very auspicious and meaningful manner. Done the right way, this samskara can act as a trigger to ensure that the child develops a spiritual and dharmik outlook throughout his or her life. It is very important for the Hindu Samaj to ensure the continuity of this practice and also to undertake it without violating the core principles laid out in the Shastras.