Khatara Satra And Pacati Festival: Its History And Tradition 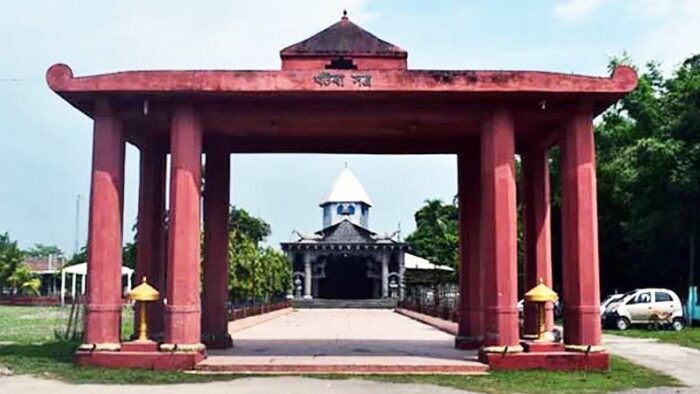 Located in the northern part of Darrang district of Assam, Khatara Satra is one of the most renowned Satras in Assam, known for providing tremendous impetus to various aspects of life – religious, spiritual, social, cultural etc. for almost 500 years. It was established by one of the well-known admirers of Mahapurush Shri Shri Madhavdev, named Sri Govinda Aatoi. This Satra is the only one Satra without Satradhikar (সত্ৰাধিকাৰ). It was run by a governing body/managing committee.

Govinda Atoi, a learned disciple of Shri Madhavdev, established the Khatara Satra in the year 1568. Govinda Atoi, the seventh Dharmacharya of Mahapurush Madhavdev’s Twelve Dharmacharyas, was born in a village called Lechakona in Rangia. Satisfied with Atoi’s efficiency, Madhavdev ordered him to go to Darrang District to establish a Satra for preaching the religion. Obeying his order, Govinda Atoi traveled to Darang with three devout devotees. Gurujana spent six months in Rowta of undivided Darang, although he did not succeed in propagating the religion. Later, he went to Bhulumukh with the devotees, but there also he did not have much success due to the floods. Therefore in search of a better location Atoi reached a place on the bank of Nonoi River, and started preaching Nav-Vaishnavism there.

At that time, the people of Darang were traditional Shaktas, Vishnu devotees of Vaishnava age, Bathau or Shiva devotees and Ganesha devotees. The fact that Govinda Atoi used to talk about salvation through devotional service by keeping only one book in Thapana couldn’t be accepted by the people of Darrang who were obsessed with Shakti-Shiva reforms for ages. Failing to make them understand, Govinda Atoi reached Madhavdev. Madhavdeva, after studying about the religious reforms of Darrangi people, handed over four sculptures of Bhagwan Ram, Sita, Laxman and Hanuman to Atoi and asked him to establish these four Murtis in the Manikut. Since then, the four Murtis have been erected in the Satra.

THE NAME BEHIND KHATARA SATRA:

It is known from the legends that there were four খট i.e. evil natured people at the place where Govinda Atoi was preaching. Because of their evil persona, the locals called their nature as খটাসুৰ and them as খট. Govind Atoi and all the devotees who came with him, were able to transform this very nature of the four people and they started preaching Nav-Vaishnavism. Hence, the name of the place changed to Khat-hara (খটহৰা’) and later as Khatara(খটৰা).

This Satra was established during the time of Koch King Naranarayan. Raja Naranarayan was essentially a patron because he waived off the tax of the Satra. Other Koch Kings also showed the same kind of generosity to the Satra. Koch Raja Dhairya Narayana arranged for a list of items donated to the Satra to be kept in order to avoid misappropriation of property. The list is based on the name of the famous Dharmacharya Badan Atta. This List is later prevailed among the people as the historical “Borkakot” (বৰকাকত).

The borkakot is made of tree bark and is 196 cm long and 24 cm wide. This paper carries the signature of the patronage extended by the Koch Kings.

The lipi of the Borkakot is Old Assamese Kaitholi and the names of all the artists are also engraved here. Namely: Sahadhar Sharma (Dipila), Bujarbarua hun Saharia (Ahini). Barkakat is now preserved with the help of modern technology.

The Pacati festival is one of the most celebrated festivals in the Khatara. Celebrated on the day of Biswakarma Puja, Pacati is a semi-dramatic show that has been popular in Assam since time immemorial.

Meaning, “Pacati has been celebrated even before the Sankardeva Era. There are many rituals & ceremonies in our society centered on birth, death and marriage. This Pacati festival is celebrated on the fifth day after the birth of a child. This is a feminism festival as per tradition.”

Gauri Sankara Bhattacharya, in the book ‘Sabinay Nibedan’, gives a beautiful account of this from the point of view of his own experience. “Before the Aryanization of Assam, the Pacati was usually celebrated as a seasonal festival in the last part of the month of Bhad, i.e., the end of the rainy season. In this festival, the women especially used to sing and dance freely. ”

(Pacati is celebrated on the fifth day, Chati on the 6th. On 11th day, Graha (planetary) puja is performed calling the Brahmins).

The Pacati singing system was practiced in Assam even before the Vaishnava movement. Srimanta Sankardeva’s Vaishnava religion created a new form in the Pacati ritual, in a reformed cultural way.

In the Khatara Satra, the Pacati festival is held on the last day of the month of Bhad (ভাদ) and on the first day of Ahin (আহিন). A day earlier, on the day of Domahi (দোমাহী) the pujaris and deuris of the Satra observe fasting. In the evening of the Day of Gondh (গোন্ধ) a traditional ritual, Bhakats (Devotees) starts singing Bhajans. After the Nam-Kirtan, the Deori i.e. the pandit brings out the Bhagawat Granth from the Namghar on his head to the Motheni-Khola. Along with that, the gayon-bayon (other devotees) follow the Deori with Dhol, taal etc. chanting Hari Naam. The religious book is placed in the Mothoni Khola (A field where dahi mantan is done). After that, the Deori or any other devotee of the Satra, disguises himself as SUBHADRA, wearing women’s dress and goes to the pond situated on the Northern side of the Satra to bring holy water. Disguise as Subhadra, the deori keeps five (symbolic to Pacati) Lamps (Diyas), a pair of Areca nut & betel leaf (তামোল পাণ) and a silver vest (কলচি) in a Bronze metal plate (কাঁহৰ বা তামৰ কাঁহী) and proceeds towards the pond to bring holy water chanting Hari Naam. (পানী তোলা). The Subhadra-in-disguise keeps the plate aside and offers the betel leaf and areca nut to Jaal Devata, puts water on the vest after enacting the ritual of cutting the water with knife. This water is brought to the main Throne chanting Hari Naam. Later, he circumambulates the temple thrice and puts the water in an already established bigger vest. Meanwhile the othe devotees dressed as Yasoda Ma, Rohini, Gopini and Baal Krishna start the ভাওনা (act) in the Mothenithola. That’s how the Dadhimanthan starts in Pacati Festival.

The carcass made for Dadhimanthan has special craftsmanship. It is crafted by a skilled artist so that the scene of Dadhimathan is beautifully reflected. This requires wood, reeds, pots, pans etc. During the song and dance performances of Dadhimathan, according to the context of the song, Bal Krishna in disguise performs various mischiefs. The Dadhimanthan ends with Ma Yasoda placing Bal Krishna in her lap.

As soon as Dadhimathan ends, Srimanta Bhagwat Naam Kirtan is performed. After this, Sri Krishna Bandana Naam Kirtan is completed, the Bhagwat Grath which was earlier established in the Mothenithola, is again put back at the main Throne of the Mandir, chanting Hari Naam and playing all the instruments. These are the sequence of events performed on the first day of the Pacati Festival (গোন্ধ/অধিবাস).

Next day, the Pandit or the Deuri comes to the Mandir dressed in new attire and lights a lamp (diya) in the Mandir. After that, the devotees chant Hari Naam and, as on the previous day, re-places the Bhagavad-Gita in the Mothenithola outside the temple. The idol resembling ‘Krishna’ is also taken out of the temple and placed next to the holy book. In the afternoon, as in the night before, dadhimathan is performed.

A large-scale fair is also held near the Satra on the occasion of Pachati where household items of daily necessities are sold.  The Pachati fair is especially famous for its coconut groves. This festive ambience lights up the entire Darang district. The radiance of the Darang district is reflected in the adjoining districts too. These festivities not only unites all, but also enlivens and enriches the path of spiritual wisdom. As this festival coincides with the BISWAKARMA PUJA in Assam, many people who own a vehicle drive to the Satra and seek blessings. It is believed that doing so protects against any mishaps. Likewise, the farmer, wishing for rain or parents seeking suitable alliances for their marriageable sons and daughters, worship the Hanuman idol located in Satra.

Another important document of the Khatara Satra is the ‘Barfali'(বৰফলি).

Devotees of the Khatara Satra traditionally refer to the history and development of the Satra as a ‘Barfali’. This is currently preserved plated through marble. 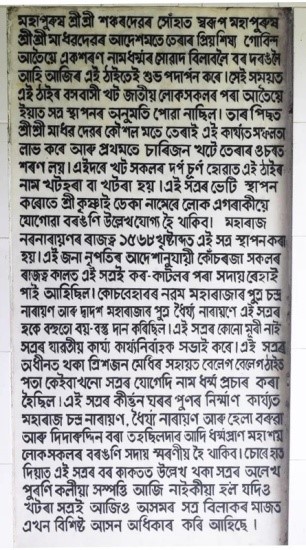 Other festivals celebrated in Khatara Satra:

Some of the other important festivals apart from the Pacati festival celebrated by Khatara Satra are:

Nando-utsav, Buka bhauna, Holi (fakuwa), Tithis of Govinda Atoi, Srimanta Sankardev and Sri Madhavdev, deoul etc. Moreover, there is celebration of Dances and songs like Vyas Sangeet, Gondhor Geet, Khol badya etc. Also every now and then, there is ভাগৱত পাঠ i.e., reading of Bhagwat Gita by the Pandit in the evening.

There are many popular beliefs associated with Khatara Satra. For example, many believe that by offering a শৰাই to the Satra one may get cured from many diseases. It is also believed that the ‘Dadhimathan’ function held at the Pacheti festival fulfills the aspirations of the people, including the culmination of a long-awaited marriage of a person who visits the temple during the Pacheti period. These kinds of festivals bind the people of Darrang district with unity and brotherhood. The rituals related to Dadhimanthan have made the people of this region more religious. Also, the mela organized at the same time has helped infuse the entire environment with a festive fervour while also helping boost the local economy. It is said that “Pacati” festival is celebrated at the Khatara Satra only in Assam, thereby making it a unique feature of this culturally rich state. 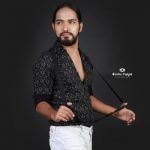 Ron Bikash Gaurav, a fashion graduate from Assam. A conceptual creator and Founding member of HinduITCell. Been engaging as a social media influencer, he carries a great passionRead more