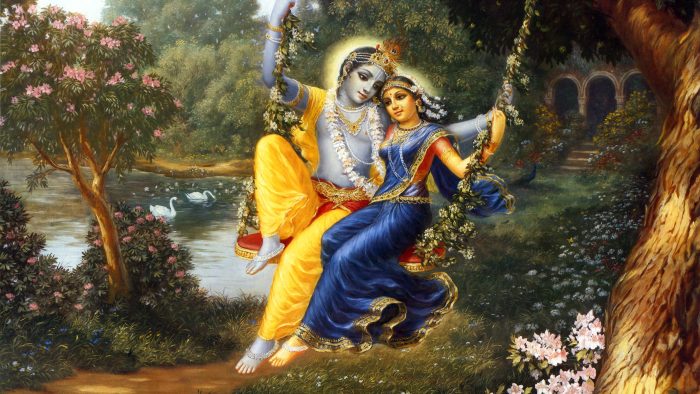 No question has vexed me more than this one. It tormented me as I took my first toddling steps on the path of bhakti. Sri Radha-Krishna is my ishta devata, the form of the Divine I personally favour and worship over all others. And yet, this doubt plagued me —

It is a question echoed by many others across the centuries, the one I hear the most when Krishna is discussed.

What we usually mean by this is —

If she is real, she must have existed physically in this material world. There must be a historical basis to her. That is how our minds have been trained and conditioned by the modern world to think.

But that is not how the ancients would have approached the question. They were not obsessed with history with a lower case ‘h’, one that busies itself with dates, geography and archaeology. The ancients understood that what mattered is meaning — not whether something existed in the past but whether it could exist within you as a living tangible reality, whether it could transform you and reveal to you the inner truths of existence and your own nature.

That is why viveka (discrimination) in the Vedic tradition is used to ascertain that which is nitya (beyond the reach of time) and anitya (that which is impermanent / transient). The first of the four requirements for sadhana (sadhana chatushtaya) in Vedanta — knowing the Truth of all truths — is ‘nitya anitya vastu viveka’ — the ability to discriminate between that which is nitya and anitya. Note, the question is not whether something existed in the past (which suggests that it also ceased to exist or will one day cease to exist, since that which came into existence is bound by time) but whether it transcends the confines of space and time.

When the young Narendranath who would one day become Swami Vivekananda was searching for a guru, he asked one question to all those he encountered — had they seen God? None could answer him satisfactorily. It was only Sri Ramakrishna who replied immediately and emphatically, Yes.

Swami Vivekananda’s question is the right one. It is the one we should be asking. He did not ask whether Krishna and Rama had walked on earth thousands or millions of years ago. What mattered was whether he could have that direct experience of their presence in his own life, right here and right now. What starts as faith has to end in anubhava (experience) and aparoksha jnanam (neither perception nor indirect book knowledge or inference but immediate, direct realization).

Sri Ramakrishna told Naren, “I see Him as I see you here, only more clearly. God can be seen. One can talk to him.” That is the acid test. If our gods are nothing more than poetic imaginings, then they cannot become real to us. They cannot transform us. They cannot unfurl the blossoming of sweet bhakti (devotion) within us.

If you told our ancestors that it was conclusively proven that Rama and Krishna never lived on Earth, they would have shrugged it off as irrelevant. Rama and Krishna lived in their puja rooms, in the various temples and sites of pilgrimage, in the footpaths of Vrndavan where even monkeys do not dare to intrude upon the sacred vana (forest) in which the raas-leela (divine dance between Krishna and the gopis (cowherd girls)) took place. The lack of historical veracity would not make the Bhagavad Gita less profound. It would not detract from the power of Rama Rajya or the enchantment of Krishna’s pastimes. Our ancients lived in the realm of bhava (spiritual feeling or attitude) and shraddha (reverence and honoring of the words of the shastras (sacred texts) and the guru), which over time mature into anubhava and realization.

In between faith and knowledge lays a vast land of limbo. When one believes, or rather suspends disbelief, but still has doubts since all knowledge received to date is indirect and is therefore taken on faith alone — that is the state in which most of us find ourselves. We are open to the existence of the Divine, to the presence of hidden realities and truths, but have not yet experienced them for ourselves. That is when we rely on the quality control systems that tradition provides.

What I really wanted to know all those years ago boiled down to this — was I just worshiping a random figment of the imagination of some eloquent poets who artistically created Radharani into existence?

Our devatas are not products of human imagination. They are revealed, as are mantras, to our rishis and acharyas, the great masters who translate and transmit to us the secrets of the supernatural and divine. Through text and tradition, through katha (storytelling) and the arts, through the practices of upasana (focused meditative practices) and deity worship, the devatas manifest within us. There are meticulous rules governing how the form of each devata is to be constructed in images and in our own minds during meditation, how they are to be worshiped according to the vrttis (vibrations) and bhava associated with the devata, and the sacred tales of katha that tell us about their lives.

It is this process of transmission and regulation within the sampradaya (doctrinal tradition) / parampara (spiritual lineage) system that acts as a decentralized yet extraordinarily effective quality control system that separates the chaff from the wheat, as it were. That which is received by us from the sampradaya / parampara system has undergone the tests of time, has proven effective in guiding the sadhana and spiritual development of millions of people across generations, has gained the respect and acceptance of other acharyas and masters. If a method of worship has been approved within that system, we can generally safely assume it can also work for us if we follow the associated parameters of lifestyle and practice associated with that sampradaya.

This is the framework — a combination of text, tradition and practice — through which we can verify that which is valid from that which is not.

Now let us come to Radha. She is not specifically mentioned in the Srimad Bhagavatam (though there are some verses that could be viewed as veiled references to her) or the Mahabharata. It is in lesser known (and possibly later) texts like Garga Samhita and Brahmavaivarata Purana that she is described in great detail as the consort of Krishna. Interestingly, the Sanskrit scholar, Barbara Stoler Miller, points out in her translation of Jayadeva’s Gita Govinda that there were a few significant references to Radha in early Puranas, such as the Matsya, Linga and Varaha Puranas.

In any event, the popular conception is that it is only with the Odiya poet Jayadeva’s Gita Govinda and other similar poetic works that Radha became popular and associated with Krishna.

Assuming (in the worst case) that is true, what would that mean? It would raise the question of why Radha was not mentioned in the most authoritative texts we have on Krishna — the Srimad Bhagavatam and the Mahabharata. There could be different reasons. The most metaphorical is that because she is one with Krishna, so completely dissolved into him, such that even marriage with him was not possible (how can one marry one’s own self?), that it was redundant and meaningless to speak of her separately. Another is that the relationship between Radha and Krishna is so esoteric and rahasya (secretive) that it was not to be widely publicized.

Another way to look at it is that the devas in the Hindu pantheon are not static. While their essential nature and attributes remain consistent, their form and manifestations evolve and adapt just as we have changed over time. In the Bhagavad Gita, Krishna says —

(Whatsoever form any devotee desires to worship with faith — that (same) faith of his I make firm and unflinching.)

(Endowed with that faith, he engages in the worship of that (form), and from it he obtains his desire, these being verily ordained by Me (alone).) (7:21, 22)

The aspect of Krishna’s relationship with Radha is not essential to the worship of Krishna; it could very well be that Krishna was originally worshiped without her. Yet, Radha adds to the essence and ethos of Krishna — she completes him. Once one conceives of Radha-Krishna, there can be no more ideal consort for Krishna than Radha. Once Radha is there, Krishna is unimaginable without her.

Radha exists only in the context of Krishna. The blessing she bestows upon us is increasing closeness to Krishna. She has no existence independent of him. And that is her unique greatness. Because she has surrendered everything to him, she has become inseparable from him. Because she has given up everything for him, only she remains with him. Osho describes it beautifully:

“Radha constitutes the whole of Krishna’s tenderness and refinement; whatever is delicate and fine in him comes from Radha. She is his song, his dance and all that is feminine in him. Alone Krishna is out and out male, and therefore, there is no meaning in mentioning his name alone. That is why they become united and one, they become Radhakrishna. Both the extremes of life meet and mingle in Radhakrishna. And this adds to Krishna’s completeness.”

Once one has traveled a little bit on the path of devotion, one no longer wonders about the existence of Radha. One knows she is real and feels the beauty of her presence. One feels the mercy of Radharani, how she smooths for us the rough path of sadhana and allows us to take refuge under her watchful eye. One feels the indescribable sweetness of Radharani. The magic and mystique of Radha is that one experiences more love and bliss witnessing the love between Krishna and Radha that one does in one’s own relationship with Krishna. That is why the devotee of Radha-Krishna will always revere and bow down to Meera and Andal but cannot substitute them for the exalted place that Radha alone has in the heart of Krishna.

Radha is real because the hallowed forests and villages of Vraj reverberate with her name. She is real because we call out to her before we can evoke invoke Krishna’s name — we say Radheshyam, Radha-Krishna, Radha Govinda. Only her name has become attached to his. We cannot even approach Krishna without going through her.

Chaitanya Mahaprabhu and so many other acharyas sang and danced for Radha-Krishna and through the nectar of their bhakti have brought to us the sweetness and grace of Radharani’s name. Through kirtan and japa and worship of Radha-Krishna in our homes and temples, we learn to see Radharani just as Sri Ramakrishna was able to show Swami Vivekananda God in the form of Ma Kali.

At some point, text torturing and intellectual debate fall away. At some point, the mind and tongue turn away from the need of the mind to reason and argue. At some point, only the experience and counsel of the saints and the practices of bhakti are our guide into the deeper rahasya that cannot be explained, only experienced. And then the questions that used to vex — they disappear. They are not answered, because wrong questions can never find right answers. They simply evaporate, as false as a hare’s horns or a sterile woman’s son.

I know Radha is real, because she is as real and living and tangible to me as my own mother. Because I am sustained by her love and grace. Because I have seen her in my heart.

Maybe Radharani was not there in the beginning, but she alone will be there with Krishna in the end.

(This article was originally published here)