Indic-Uvacha: The Nature Of Criticism Required In Dharmic Discourse 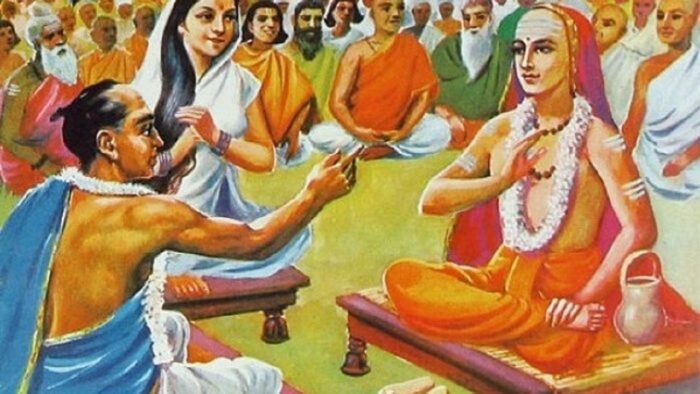 Today’s Indic world is full of conversations and discourses. The complexity of our situation is such that while on one hand, we haven’t been able to shed our colonial past completely as it continues to be present in our midst through their representatives who knowingly or unknowingly play the game, on the other hand, the Triad of Modernity, Monotheism and Industrial Dynamic continue to disrupt the Indic balance between the Individual, Community and the State. Each tear results in a different cry and conflict – some of which matures into a conversation and even less takes the form of a discourse. What finally evolves into a reconfiguration of the Society, Nation and the State is really very less. Many things have to evolve if we have to reconfigure our architecture of life with speed. One of them is the nature of our Conversations and Discourses. In a Discourse, one obviously cannot always be agreeing, elaborating, furthering discussions. At times, we will have to indulge in Criticisms. However, today our Criticism has the tendency to be articulated as unresolvable conflicts fuelled by the nature of Social Media and Modern Individuality anchoring itself on the Ego. We need a different way forward.

Criticism is a necessary evil in public discourse, of course. But the evil component it contains must not be forgotten. It has an element of fracas and harm in it, a force that pushes away the others from their positions of comfort. Hence, it is necessary to conduct our criticism in a manner that it results in positive outcomes. It must not result in negative outcomes – at least, between Dharmic entities.

Hence a pertinent question that arises is, How should a Dharmic discourse be conducted?

A Dharmic discourse must have the following 10 attributes.

‘Apyayamana’ in Sanskrit means ‘that which is appealing’. Our conversations must begin with a sense of appeal. When do we do that? When we recognize that the other party too proposes to solve the same set of problems and is interested in similar destinations. The difference lies in how we prioritise the problem set, the methodologies chosen to solve those problems and a different destination point in mind as a consequence.

In such a situation, it is important that our criticism is pleasing enough so that it compels the other party to rethink. It must be articulated as though a parent is prevailing upon an erring child. The intention must be evident to compensate for the bitterness of Danda that is evidently part of the criticism. When you press a person to see something that one cannot, there is an element of resentment that naturally creeps into the conversation. The tenor of the conversation must compensate for the difficulty of the substance that one cannot see.

There are some tricks possible to achieve the Apyayamana element. We are way too focused on responding to a moment. We tend to think our words dissipate and evaporate. However, they tend to seep deeper than we can imagine. A situation may be overcome, the context may get erased with time, but our criticism remains etched forever in some form. A consciousness that our words stay for much longer than we think, especially when written, will provide us with the right distance necessary to avoid the Danda of criticism. The criticism must be relevant in some form whenever it is accessed much later in time. If it is on Social Media, our children are likely to read it one day – long after we are gone. This consciousness itself helps us temper our expressions and conversations. The fear that our expressions might stay as negative examples might help us evolve better conversations.

This is the most important way to get away from a Conflict ridden conversation. Our Criticism must have the responsibility of contributing to the resolution of the problem, else we are merely seeking an emotional conflict with other entities. Problems can only be resolved when you grant the other party certain legitimacy of position, conscious indulgence in the understanding of the universe of which both are a part of, seeking the roots of the problem, identifying the larger problem set, exploring the solution set and then ordering/prioritising solutions and methodologies. Our criticism must help us see the situation from different distances. If we stay too close we can’t see everything. We may start from some point, but we ought to look at it from multiple directions.

Otherwise, there is no point in Criticism.

Nevertheless, certain practical considerations ought to be there while we indulge in a conversation. We, or the groups that we associate ourselves with, alone are not going to win the complex battle in front of it. We will need allies and some of them are going to come from groups outside of ours. After all, even the Devatas needed Rakshasas for Samudra Manthana for the Bhagavan was clear “Devatas, you are too weak now to get Amrita all by yourselves. You need the power of the Rakshasas”.

In summary, we ought to articulate in a way that effectively communicates to people who seek to reach similar destinations within our Universe. It should not make Enemies out of Friends. Rather, every conversation must create a Friend to travel the distance together. This is no more an ideal, this is a necessity. If you are in the deep sea, try to make a friend even out of a shark and ride it as a boat.

Right now we are conducting our conversations like we are in a war and out to kill each other – that is the harsh truth. At every single opportunity, we “take positions”. That is done only in a war to kill the Enemy. Once you take a position it becomes very difficult to accept a mistake. The articulation of any criticism should not block our backtracking from that position.

None of us here is yet to produce a Theory that we can prove, neither are we sitting on a mountain of experiences/information using which we can make strong claims. We are still exploring. There is a lot more to be done. The best recourse until then is to use each other as means of furthering our thoughts and frameworks. The river is yet to mean the Ocean.

Criticism evolved in the west as a literary form, has its roots in high individuality of the west. While it is difficult to say we absolutely did not have Criticism at all, it never evolved into a discipline in itself. Bharateeya Parampara evolved the tradition of Vyaakhyaana which is a lot more than Criticism. The reason is to see what has emerged as a dissent and weave it back into the mainstream. In the “Vyaakhyaana” the ego is submerged. It is a meaningful explanation of something that results in resolution and reconciliation.

Criticism is fundamentally an enterprise in Ego. It seeks Victory. To give Criticism primacy in our discourse is to deviate from the path of Bharateeya Parampara. Anybody who took that route has not succeeded in shaping something that stood the test of times.

Eventually, what is it that we disagree with each other about?

Our Criticism discourse must help understand the above, criticism articulated in terms of these. It must help us understand all the variables of the situation, their interrelationships and the dynamic. It must enhance our sense of problem solving and expand our universe.

Pinning each other against a Wall and settling scores is not going to serve our purpose.

It must also be called out that our public discourse is gradually taking the shape of caustic narratives. This is more a reflection of our own personalities. It has very less to do with the actual problem, something that all of us need to be cautious of for our own good. We are in for it in the long run and this excessive emotional energy spent will prove costly.

Genuine problem solvers never lose a sense of resolution At Any Point.

In the Bharateeya Parampara, Shabda is Brahma. We have immense faith in the ability of sound to create a universe of experience and physical reality. Extending that to our discourses, the spoken & the written create their own universe. Our discourses must demonstrate that confidence. We need to have confidence that a well written positive criticism has its own long term impact, even if it is less effective in the short term. It is lack of this faith that results in caustic indulgence in discourses.

Mysore state is one example, where the Dharmikas indulged in their intellectual conflicts with this confidence. We may read some of the past literature and we perceive them as friendly, pleasing conversation. In reality, they were conducting their conflicts but in the sweetest language.

We lose this confidence, we lose the opportunity to resurrect ourselves. This is a necessary confidence to restore the flow of Bharateeya Parampara.

We may not be able to add to the resolution. But, if our Criticism is increasing the conflict within the Dharmikas, let us watch out. We may be right in the Substance of our Criticism but if we slip in its Form, the opportunity is lost. The Form is as important as the Substance. The Carrier Wave determines the success of the Substance Wave. After all, we are interested in our Success.

Modernity has created immense pressure to act and with immediacy. That in itself has its flaws. Worse, when we indulge in Criticism under that pressure and with a false sense of immediacy. We may need to practice Yogic Silence until the right Action dawns upon. Our times requires that Tapasyaa.