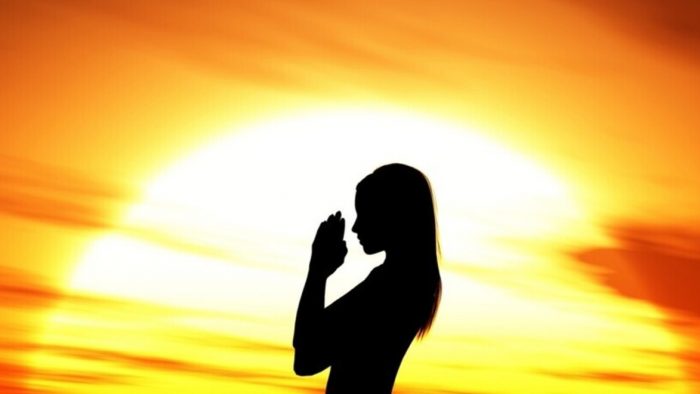 In the previous articles, we successively saw how Hinduism associates menstruation with Ashaucha, austerity, self-purification, rest, and sacred celebration. In this article, let us briefly look into how Yoga philosophy perceives menstruation.

Yoga forms an important branch of the Hindu worldview. It is a very vast, diverse, and largely practical system, which aims to free an individual from the bondage of worldly life. Towards this end, it deeply explores the various dimensions of individuality, including physiology, functions of the Prana-the life force, and the mind.

It aims to harmonize the functions of the body, Prana, and the mind with each other and facilitate the dawning of greater Self-awareness. The Yogic analysis of human physiology and the functioning of the Prana within the human body can serve as a useful guide in understanding menstruation as a physiological process and its relationship to the functioning of life-force.

We already dealt with how Hinduism perceives an Individual as having five layers of individuality and how among them the three layers- Annamaya Kosha (physical body), Pranamaya Kosha (Vital body or Vital force) and Manomaya Kosha (the mind) play an active role in the waking state of an individual, whereas most people are unaware of the deeper layers, which are largely dormant in them.

The Yogic literature elaborates on how one should cultivate his body, mind, and the vital force (Prana) so that they facilitate him/her to attain the highest state of Samadhi.

The Hatha Yoga, Patanjali Yoga, the Kundalini Yoga, etc. all aim to harmonize the body, Prana, and the mind. Prana is the life-force that supports the body and connects it to the subtle mind.

It is the life-force, which enlivens the body, makes the body alive, and accomplishes all the body activities. It is for this reason that a person is considered ‘dead’ when the life-force leaves his body.

The Yogic scriptures perceive this Prana, which makes up the vital body, as having five different functions within the gross human body aimed at accomplishing five different tasks that are necessary to keep a person alive.

The five different tasks that are vital for sustaining of the body are inhalation, elimination, digestion, deglutition, and sound production, and circulation, and the aspect of the life-force that governs each of these five functions are designated as- Prana, Apana, Samana, Udana, and Vyana.

Mahabharata Shanti Parva (Section 184) states: “Through the breath called Prana a living creature is enabled to move. Through that called Vyana, they put forth strength for action. That called Apana moves downwards. That called Samana resides within the heart. Through that called Udana one eructates and is enabled to speak in consequence of its piercing through (the lungs, the throat, and the mouth). These are the five kinds of wind that cause an embodied creature to live and move.”

These five are together called Pancha Prana or Pancha Vayu (five airs) and according to Shiva Samhita (3.7), a Hatha Yogic text, the seats of the first four Vayus are respectively located at the heart, anus, navel, and throat and Vyana-the fifth is all-pervading in the body.

Menstruation, being a downward process of elimination, is predominated by the Apana Vayu. And hence, during the monthly periods, the Apana Vayu is in an exalted state. On the other hand, any religious and spiritual activity, be it Yoga, meditation, Puja, fire ritual, or visiting temples, causes some degree of upward movement of Apana Vayu.

Yoga, for example, aims to move Apana upwards, so that it merges with Prana and take an individual to a state of heightened self-awareness. Similarly, Puja and fire ritual aim to awaken the Kundalini, by first making the Apana move upwards.

Temples are basically centers of cosmic energies, which will have a similar effect on individuals as the Yoga or Puja. The energy and the environment in the properly consecrated temple will facilitate meditation and stillness of the mind by moving the Apana Vayu upwards.

But, Apana Vayu being a downward moving force by its very nature, any attempt at making it move upwards during menstruation, will interfere with the menstruation process and hence will create an imbalance.

Rajarshi Nandy, a spiritualist writes in his article “Sabarimala Discreet, Not Discriminatory” thus: “In Yogic parlance, the body is ruled by five main vayus or forms of vital air: prana, apana, vyana, samana, and udana. Of these, apana vayu rules all downward bodily movements, from defecation to menstruation or orgasm. One of the primary aims of a successful yogic process is to force the apana to move upwards inside the body, synchronize it with the prana, and awaken a state of heightened awareness and concentration, referred to as the kundalini awakening.

“It is not that every time a person visits a temple such is going to happen; nevertheless, every time concentrated attention is diverted into a process or an object, religious or secular, there is always the chance of such a happening. During menstruation, there is a continuous increase or greater prevalence of the Apana vayu inside the body. Hence, trying to concentrate hard on anything would be equivalent to forcefully trying to change the direction of an already aggravated vital air in the body. This can potentially open the individual to the unpleasant prospect of undergoing various physical or psychological problems if such a course of action is deliberately pursued for a sufficient length of time. All successful worship is finally a matter of applied concentration. Therefore, as a precautionary measure, it is traditionally and, if I may add, wisely regarded that entering a shrine during the ‘periods’ is a bad idea.”

The advice regarding non-performance of Yoga and other religious activities, including visiting temples during menstruation has to be understood with reference to the impact of these activities on the Apana Vayu, which facilitates menstruation.

In the next part, we will see what Ayurveda says about Menstruation.

Explore Hindu View of Menstruation Part I, II, and III

The writer has published an exhaustive research book on the subject titled ‘Menstruation Across Cultures: A Historical Perspective’ and is available on Amazon