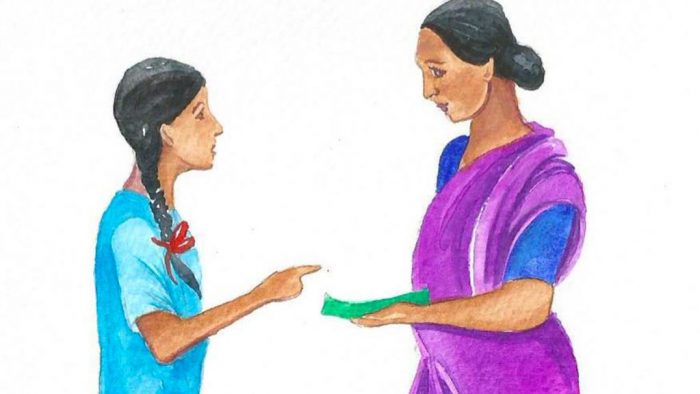 In the previous article, an examination of the various menstruation practices prevalent among major religions and cultures across the world was taken up. It was shown, how from organized religions like Judaism, Christianity, and Islam to indigenous tribes in North America, Africa, or even Siberia, almost all of them attached a notion of impurity to menstruation and segregated menstruating women in one way or the other.

In India and in Hindu society, one may routinely observe menstruating women practicing one or the other kind of restrictions and some notion of impurity being attached to menstruation.

But, in contrast to Abrahamic religions and many other cultures across the world, one will also witness Hindus celebrating menstruation in various forms ranging from the celebration of the onset of menstruation among young girls to the yearly festival associated with the menstruation of Goddess Kamakhya in Assam.

These diverse Hindu beliefs and practices associated with menstruation have often led to confusion among people, especially women, and as a result, we may find diverse responses of people to these Hindu menstruation practices.

On the one end, we have many traditional families who strictly and blindly adhere to various menstruation restrictions mechanically, without ever examining them or understanding their essence.

On the other end, we have modern ‘feminists’ and ‘liberals’ who blindly and mechanically reject those menstruation practices based on modern, often western notions, without ever seriously attempting to understand these practices and their essence on their own terms.

It is obvious for women, especially young girls, to question some of these restrictions and practices associated with menstruation because ultimately it is they who are supposed to follow it.

Questions like: Why segregation? Why the restrictions on entering temples, or performing pujas during this time? Why is a notion of ritual impurity attached to menstruation, which is a simple biological process? These questions need to be encouraged and not suppressed.

It is partly the result of suppression of such questions, that many women today either mechanically implement those practices, or outrightly reject them as taboos and blind-beliefs. But, these knee-jerk reactions are neither mature nor beneficial to people and society as a whole.

Hinduism, i.e. Sanatana Dharma is the very foundation of this country, its culture, and its identity. And hence, the entire gamut of socio-cultural and religious practices that have flourished in this country have their roots in Dharma.

Hence, being rooted in Dharma (which literally means “that which upholds: individuals, the society, and the entire universe”), there is some wisdom, some value in various traditions and practices, including those related to menstruation.

Though it is undeniable that some of these traditions have become distorted over time, it is also equally undeniable that many traditions also retain their essence. It simply takes a discerning mind (Viveka) to separate the wheat from the chaff.

In this first part, let us take up the notion of Menstruation as Ashaucha.

One of the important notions about menstruation that emerges from a careful reading of Hindu scriptures is that menstruation is considered as ‘Ashaucha’ (which could be roughly translated as ‘ritual impurity’) and the women who have got her periods have entered a temporary period (three days to be specific) of ritual impurity. But what does Ashaucha mean? And what does associating menstruation with Ashaucha imply?

Angirasa Smriti (Verse 35) informs that during the fourth day after menstruation stops, women become Shuddha (pure) through the purification bath [2]. Vashishta Dharma Sutra (5.5) goes a step further and explicitly states: “A woman in her courses will be Ashuchi (impure) during three (days and) nights.”

Baudhayana Dharmasutra (2.2.4.4) informs that the Ashaucha is only “temporary” [3]. Parashara Smriti (7. 16-17) informs that even if menstrual blood continues to flow after four days due to some illness (example: hormonal balance etc.), it will cause no further Ashaucha (beyond three days) [4].

This is further elaborated in Stridharmapaddhati of Tryambakayajvan, wherein the author classifies menstruation into four types based on their causes: due to illness, emotional disturbance, imbalance of hormor (body fluids), and due to regular monthly cycle; and designates only the last, i.e. menstruation caused due to regular monthly cycle, as being associated with Ashaucha [5].

In other words, Hindu scriptures are clear in their view that the 3 days (and nights), when a woman undergoes menstruation, she has entered a temporary phase of Ashaucha.

So what exactly is Ashaucha? Though, roughly it has been translated to mean uncleanliness, impurity, etc. the full implication of the term goes beyond the normal notions associated with these terms. To understand the full meaning and implication of calling menstruation as Ashaucha, we must first understand the Hindu concept of an Individual and the concept of Shaucha (purity) and Ashaucha (impurity) associated with such individual.

Hence, each Individual is constituted of five bodies- physical, vital, mind, intellect, and bliss. But, in day to day lives, at the Vyavaharika (transactional) level, a person is most active at his physical, vital, and mental sheaths. Hence, it is with respect to these three layers of individuality that one must understand the process of menstruation.

One of the names for Menstruation in Sanskrit is ‘Rajasraava’, which loosely means ‘flow of Raja’. Though the term ‘Raja’ here is often translated as ‘blood’, it may as well refer to ‘Rajas Guna’.

Rajas are one of the three Gunas. It denotes flow, movement, passion, energy, etc. and imparts dynamic nature to an Individual, but at the same time, it also increases a person’s bondage to the worldly cycle.

Blood is the carrier of Prana-shakti within the physical body. Thus, through the excretion of the blood, excess Prana Shakti, which is Rajasic in nature, is being thrown out of the body during menstruation.

In the mental sheath, Rajas represents thoughts and emotions such as anger, frustration, uneasiness, irritation, mood swings, etc. to which menstruating women are more exposed to. Therefore, menstruation is a complicated physio-psychological process that exposes a woman to the excess Rajasic condition of the physical, vital, and mental levels.

Shaucha or purity is one of the most important tenets of Hinduism. It is considered as one of the common duties (Samanya Dharmas) that each human being is expected to adhere [7]. It is listed as one among the Niyamas (compulsory observances) required to practice Yoga [8]. It is also necessary for the practice of Bhakti [9] and Vedanta [10].

In fact, one of the Smritis goes a step further and states that a person should always try to maintain Shaucha in whatever work he/she engages in, and without such adherence to purity, all actions and works become fruitless [11].

From above, it is quite clear that the concept of Shaucha or purity is deeply connected with the concept of competency or qualification to perform a particular action.

This Shaucha gains even more significance with respect to religious and spiritual actions like performing puja, homam (fire ritual), or visiting the temple, etc. Hindu scriptures define Shaucha not only in terms of external purity but also in terms of internal purity [12].

Thus, purity or impurity is to be understood at the level of physical, vital, and mental sheaths.

At the physical level, purity constitutes cleanliness and hygiene of the body and surroundings. Thus, all body secretions and excretions, be it sweat, urine, feces, blood, or menstrual discharge, are all considered as Ashaucha at the physical level.

At the vital level, a balance of all the five kinds of vital airs (Pancha-Vayu or Pancha-Prana [13]) within the body is considered as Shaucha. Imbalance in them, for example, due to excess Apana vayu and Rajasic energy during menstruation, is considered as Ashaucha at the vital sheath level.

Hence, menstruation, wherein the internal passions of the mind are at a heightened condition, is considered Ashaucha even at the level of the mental sheath.

For all spiritual and religious activities, the cleanliness of the body, balance in the vital force (Prana), and the calmness of the mind are very important. Without these three qualities, at least to some extent, no person will be able to properly perform worship.

In other words, purity at physical, vital, and mental levels are among the required competencies for any religious activity, and impurity at these levels makes one incompetent to perform those religious and spiritual activities.

Moreover, cleanliness and purity are important, even for the performance of various secular activities. Thus, the Hindu scriptures speak about various kinds of situations wherein a person becomes associated with Ashaucha and becomes incompetent to perform certain religious and secular activities and certain restrictions are placed on him/her during those situations.

It is important to note that Ashaucha, in general, is as much about impurity as it is about competency to perform a particular action, especially religious action.

Ashaucha related to menstruation is not only about unhygienic conditions at the physical level, which has been more or less addressed by sanitary pads, tampons, etc. in the modern times; Ashaucha is also about the heightened Rajasic state of menstruating women in their physical, vital, and mental sheaths and how this heightened Rajasic state makes:

Similarly, Brihadaranyaka Upanishad (6.4.13) advices menstruating women to not drink from a metal cup (as metals conduct energy at both physical and subtle levels).

Yajurveda Taittiriya Samhita (2.5.1) further advises women to not cook food (because, food cooked in Rajasic condition will be Rajasic in nature) and also asks them to stay away from sexual intercourse, because due to heightened Rajas, if conception happens during menstruation (it’s possible, though less likely), the resulting child may suffer from intra-uterine death, early death or some form of deformity. This has been enunciated even in many Ayurvedic texts, which we shall take up in the future parts.

This kind of Ashaucha and the related restrictions are not unique to women. As noted before, both men and women become associated with Ashaucha under different conditions like the death of relatives, etc.

Thus, calling menstruation as Ashaucha, does not degrade women nor make them inferior. Instead, it is a temporary state of impurity, that a woman enters, which as we shall see later, actually purifies her and makes her remain ever pure.

Nevertheless, it must also be noted that there are Hindu sects, particularly in the tantric traditions, that recognize the menstrual process itself as Shaucha (pure) for certain ritual purposes and have specific rituals for this heightened state.

In the next part, we shall see that Ashaucha is actually only one facet of menstruation. The monthly periods are also understood as a form of austerity and self-purification in Hinduism.

The writer has published an exhaustive research book on the subject titled ‘Menstruation Across Cultures: A Historical Perspective’ and is available on Amazon