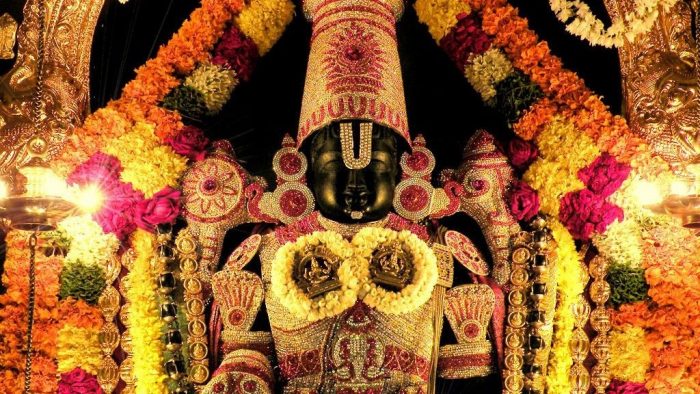 This series was first published on Indiafacts and is being reproduced here. Read parts I, II, III, IV, V , VI, VII and VIII.

Concluding the series on Hindu Temples, their conception, history, heritage and legacy authored by M.D. Srinivas.

Instead of endowing the temples, the Indian state extracts contributions from them

While taking over the management of the Sri Venkateswara Temple at Tirupati, two hundred years ago, the Collector of North Arcot G. Eo. Stratton had alluded in his report (which was cited earlier) to a statement allegedly in the Bhavisyottara Purana that “the worship of Vishnoo will cease at the completion of 5000 years from the commencement of Caliyug”. He also expressed the hope that “should the prophecy be fulfilled, we may in about a century more expect a material decrease in the revenue of the Tripatty pagoda”.

Unfortunately, this prophesy of the “Stratton version” of the Bhavishya Purana does not seem to have materialised. It is said that the temple had over a million pilgrims in 1961, 7.4 million in 1981, and over 20 million in 2003. The incomes of the temple are also growing correspondingly. In 1908, the incomes were around 3 lakh Rupees and rose to about 37 lakhs by 1945. It rose to Rs 9 crores in 1970, 55 crores in 1985, and in 2003 they are estimated at around Rs 615 crores, of which more than a third is said to be from Hundi collections. The abode of Sri Venkatesvara continues to thrive mainly from the reverential offerings of His devotees.

But that is about as much that can be said about the glory of the Temple. The management of the temple is currently done by the TTD Board as per the Chapter XIV of the Andhra Pradesh Charitable and Hindu Religious Institutions and Endowments Act of 1997. Most of the contributions of the devotees and other income of the Temple are expended on purposes which have nothing much to do with the religious activities of the Temple, or the provision of amenities for the pilgrims or for any activities with a view to further sanatana dharma. Even more distressing is the fact that the religious activities of the Temple are circumscribed not by any of the hoary traditions of the temple, but by something known as the Bruce Code, which came in to force in early 19th century.

The Tamil Nadu HRCE department notes in its website that, “The management and control of temples and administration of their endowments has been recognised as one of the primary responsibilities of the state.” 89 It mentions that as of March 2003, there are about 36,500 temples (including 56 maths and 17 Jain temples) and 1900 endowments under its management. Of these 4,000 institutions (the so called listed institutions) have an annual income of more than Rs. 10,000 per annum. Of them 438 have incomes between Rs 2 lakhs and 10 lakhs and 153 have income more than Rs 10 lakhs per annum. There are 4.79 lakh acres of land owned by these temples, which are cultivated by around 1 lakh tenants. The temples also own about 20, 000 houses and 33,600 sites, which are occupied by around 80,000 tenants.

While the number of institutions under HRCE management seem to be steadily increasing (it has risen by over 2,000 during 1997-2003), the extent of the properties owned by them seem to be decreasing steadily. In 1997, it was said that the temples managed by HRCE owned 4.91 lakh acres of land, 22,600 and 73,000 sites. At the same time, there has been a very steep rise in the number of officers of HRCE in the rank of EO and above. There were 493 such officers in 1997, which number has risen to 629 in 2003. The annual demand of grants for the Department in 2005 is around Rs. 29 crores.

The temples themselves have been steadily losing a large part of their assets and incomes. Various legislations in independent India, starting from the Estates Abolition Act of 1948 (in which the Tirupati Temple is said to have lost over 800 villages), have legislated away a large part of the lands and incomes and dues to the Hindu religious institutions. As of March 2000, the total arrears due to the Temples managed by HRCE Department in Tamil Nadu were estimated at Rs. 80 crores. In recent times, the Department had filed about 26,000 cases pertaining to about Rs 26 crores of arrears and only Rs 8 crores had been collected as a consequence.

It is indeed clear that the people of India have been the victims of a monumental fraud committed on them.

It is indeed clear that the people of India have been the victims of a monumental fraud committed on them. They had been assured during the independence movement that the state in Independent India would be a protector of their Dharma, an assurance that is still being repeated whenever the Indian people choose to give vent to their strong feelings of hurt and resentment about the condition of their holy places and institutions. The Hindu elite, who are the custodians of the modern Indian state, seem to think that they are the inheritors of the Mughal or the British Empire in India. They have legislated unto themselves far greater powers of control and intervention over every aspect of Hindu religious institutions and practices than was ever the case in the entire history of this civilisation.

Perhaps, this is largely due to fact that they continue to harbour grave doubts about the viability of the ideas and institutional arrangements of the Indian civilisation; they also seem to entertain certain suspicion and even repugnance of the ways of the Indian people and their communities. If, under these circumstances, the Hindu religious institutions still survive and function, albeit under a state of siege, it is only due to the unshakeable faith of our people and the strength and resilience of the foundational principles and the social framework that characterises our sanatana dharma.