Symbolism of Temples Part I: Do Hindus Understand their Sacred Symbols? 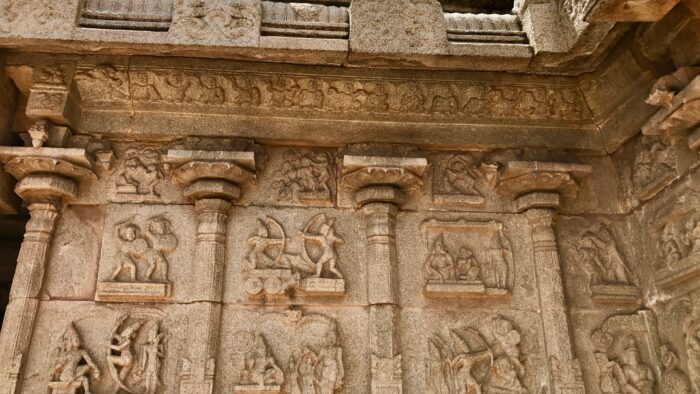 Do Hindus understand the symbolism of temple sculpture and architecture? Many will argue that today this is largely not so. The symbols lie unrecognized by many devotees. The rituals continue without connecting meaning to symbols.

In general, the appreciation of both sculpture and architecture is going down because the faculties of appreciating them are disappearing.

The reasons are too well known. The cultural disconnect that modern education and socio-political system imposes upon our generations makes sure that they are made unfamiliar with their own rituals, symbolism, and Sanskrit language.

As a result, what was a daily routine for our grandfathers is something now only laboriously learned by us, if we ever will so.

But was this the case in the past too? Did Hindus visit the temple without understanding its symbolism and meaning? Or were they able to partake in the divine meaning that exuded from myriad symbols that proliferated throughout the various parts of the temple?

Did our architects and sculptors create masterpieces whose meaning was lost upon the majority? Were they singing to the wall? Were they building for themselves? Or was there a common collective consciousness which easily partook the meaning that the vigraha imparted and that the sculptor intended?

The Hindus at large did understand the meaning of the symbols that were displayed in the Hindu temple. There are various indicators that lead us to that conclusion.

The first common ground that the devotee had with the creators of art, sculpture, and architecture in India was the shared symbolism and common metaphors that pervaded not only all the disciplines of art but also the disciplines of philosophy and sciences.

The metaphors that the Indian sculptor applied while creating a sculpture, were shared across various disciplines. The same metaphors that are common in Hindu darshana carry over seamlessly into Hindu iconography.

The darshana with which he was familiar through the various epics, stories, kathas, mantras, daily worship, and the general art of storytelling was the darshana which dictated the hand of the sculptor too.

The Indian artist did not focus on individual creativity. For him, the greatest achievement was the moment when the individual disappeared altogether and became one with the cosmic consciousness upon which he was meditating.

It was when he reached that stage of undifferentiated unity with the supreme consciousness that the best of art was created. It was only when he disappeared completely that he could express himself most powerfully and most universally.

“The artist’s preoccupation was with the “symbol” through which states of being could be suggested or recreated. Subjective personal experience played little or no part, and artistic creation began only when the artist had attained, in his own intuitive mind, the state of calm termed as equilibrium (hrdaya visranti). Having conquered all personal suffering and pain and attained this state of complete detached emotion, he presented through age-old symbols the spectrum of life only to re-create a similar state of being in the reader or spectator, a state in which the latter could experience, however transitorily, the pure bliss (Ananda) of art.” (Vatsyayan 14)

The metaphors of art that went into the creation of a shared vocabulary in iconography also dictated other disciplines of art, like natya and nritta. The Karanas are first expounded upon in the Natyashastra and this is the lakshana grantha, the fundamental scripture, from which dance, music, and also iconography spring from among many other disciplines.

“All the special features of this architecture, its starting point of unity in conception, its crowded abundance of mass and design of significant sculpture, ornament, and detail, and its return to the oneness are “the necessary units of this immense epic poem of the Infinite”. Without going into the technique of architecture which lays down the method by which this infinite multiplicity can fill the ultimate oneness, it is enough for our purpose here to be fully aware of the tremendous unity of purpose and design which Indian architecture symbolizes.” (Vatsyayan 21)

Kapila Vatsyayan asserts that far from being meaningless Indian architecture is completely meaningful. Not only that there is an organic dimension to its modules which makes it a meaningful complete. Kapila Vatsyayan and again and again stresses that it is meditation which connects all these arts:

“Just as Indian architecture reveals the unity through infinite multiplicity, Indian sculpture embodies the spirit and soul of the cosmic Infinite in the form and body of the particular, the impersonal individual which in turn suggests the cosmic and the Infinite.” (Vatsyayan 22)

The Source of the Shared Vocabulary

This shared vocabulary arises from the Yogic chittabhumis, the yogic planes of consciousness which were privy to anyone who meditated under the guidance of a guru. Individuals meditating for attaining self-enlightenment stumbled across the sacred metaphors which were so potent that they could pervade through various disciplines and create a shared vocabulary.

The thread of consciousness running through Hindu darshana enlivened every one of these disciplines, institutions, and individuals.

In India, those who write the darshana granthas, do not engage in speculation to arrive upon ‘theories’. The fundamental philosophical questions are not subject to his individuality, to his individual whims and fantasies, as explained above by Kapila Vatsyayan. He literally sees the truth during meditation.

That is why it is called darshana. What the great rishi, sage, or philosopher does is essentially the same act that takes place when a devotee has darshana of the deity in the garbha-griha of a temple. Across various disciplines, individuals, and institutions the thread of consciousness runs to unite it in a shared vocabulary.

Not everyone meditated enough to directly grasp the meaning of all these symbols but those who wrote the shastras, those who sculpted great vigrahas, and those who built great temples had direct experience of these yogic chitta bhumis.

These pioneers and rishis popularized these concepts in society through various means in various disciplines. The abstract and esoteric notions were carried through very popular means like katha-pravachan parampara in which stories of great heroes became carriers of abstract ideas.

The highest of meanings were conveyed through the commonest of rituals, creating a shared vocabulary that enabled even the common man to understand the meaning and symbolism of complex vigrahas of a great deity.

Since all arts and sciences were geared towards the same ultimate goal, it was hard to miss the symbolism even for the common man. No matter what the station of a person was, he recognized in one way or the other, the underlying oneness of all creation, all existence, under the manifestation of multiplicity.

Art in dharmic culture rises in Yogic chitta bhoomis. No external influence or individual innovation is necessary for the inspiration of art. The inspiration of dharmic art is always divine. The individual initiative is limited to the conviction of getting down to meditate. Art in such a society is born in the minds of the Yogi.

Even if all concrete signs of art are obliterated by enemies of dharma, they are not completely destroyed, for their origin lies in dhyana, in sadhana, in yogic chitta bhumis.

These yogic chitta bhumis are available to not just the artist who sculpts the vigraha of Vishnu, not only to the architect who designed the temple but to any practitioner of yoga who is initiated into a meditational discipline by a great guru. The understanding of the artistic impulse was thus available to the common man too.

The shared vocabulary that pervaded various disciplines of art also pervaded darshana or Hindu sciences too and most importantly they all had their origins in the yogic chitta bhumis, in the yogic states of consciousness which were available to the common man, to the non-artist too.

Not everyone meditated or struck upon states of consciousness conducive to great art, but sufficient individuals in the society did and their experiences had a readymade vocabulary and social customs and rituals to make them popular across all sections of society.

That is the beauty of the Hindu arts.

This is the reason that the Hindu devotee could understand the meaning of the vigrahas that he saw, the devaalaya that he visited, and the chitrabhasa (painting) that he saw. All Indian arts shared a vocabulary with common metaphors.

All Indian disciplines originated in yogic chitta bhumis which were accessible to anyone who meditated. This is what created the connection between the artist and the devotee.