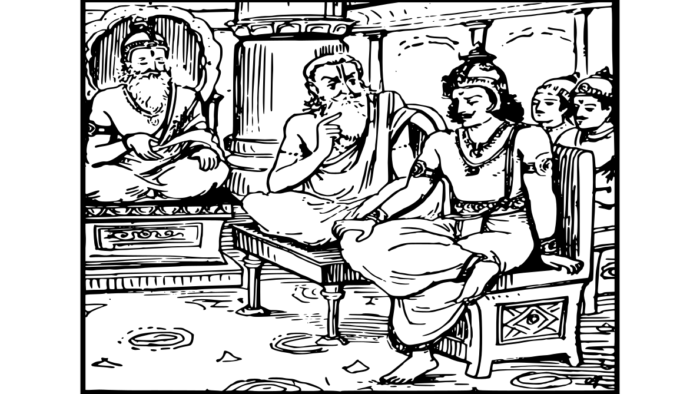 Beliefs, superstitions, ‘super-duper’stitions or whatever you call it, vary vividly from culture to culture. In countries like India and Korea, there is a prominent belief that, “Shaking your leg would shake away your wealth and luck”. Correlation of a dangling leg and the dropping wealth can’t be empirically investigated. A zillion reasons may cause one’s loss of wealth. Hey reader, but wait! We shouldn’t dismiss the belief as a superstition so hastily. It could be hinting at the restlessness or the focusless-ness of the ‘to be broke’. A strangely similar story from Mahābhārata can be our subject of discussion today: ‘The curse of Maitreya’.

Overture to the Incident

In the second parva of Mahābhārata, Sabhā Parva, we see Duryodhana becoming extremely hysterical after having witnessed the sparkling sabhā at Indraprastha and the unprecedented wealth of Pandavas. He and his accomplices hatch yet another evil plot to hamper the growth of his paternal cousins – ‘A Game of Dice’. After a sequence of some dramatic incidents including the disgraceful disrobing of Draupadi, and finally losing the game to the deceit of Shakuni, Yudhishtira and the rest had to leave for the forest, for a stipulated period of 12 years and an additional year to be spent incognito. There begins the third parva, Aranyaka Parva, ‘Aranya’ meaning forest.

Even after having sent his adversaries into exile, wicked Duryodhana remained restless. He summoned Shakuni, Karna and Dushasana and vented out his concern. He couldn’t admit to the fact that the Pandavas would return to the kingdom one day. He said, “If I again see the Parthas return here in some way, I will certainly dry up, without life and without riches. I will consume poison or hang or use a weapon or enter fire. I will never be able to witness their prosperity.” [1]. Shakuni, Karna and Dushasana pledged their allegiance to him and consoled him stating that the Pandavas won’t return since their departure was based on an agreement. Duryodhana turned his face away, remaining unhappy. Realizing this, Karna spoke in wrath, “’……. Let us now grasp our armour and weapons and mounting our chariots, go together and kill the Pandavas, who are roaming in the forest. When they have all been pacified and have left for the unknown journey (death), we and Dhritarashtra’s sons will be unchallenged…….” [1]. All the rest applauded and made up their minds to kill the Pandavas. The composer of this itihāsa, Maharshi Krishna Dvaipayana Vyasa saw this wicked plan with his divine sight and reached there to restrain them. He rushed towards the blind king Dhritarasthra and expressed disappointment about the obnoxious train of events happening. He was agitatedly despised at Duryodhana’s obsession to kill the Pandavas. Vyasa instructed Dhritarashtra to act fast and hold back his eldest son. He warned him that in trying to kill the ones in the forest now, Duryodhana will end up getting killed! “Refrain from it since this is not Dharma”, said Maharshi. As in plenty of previous occasions  and those yet to come, Dhritarashtra keeps a readymade helpless face and admits that he is unable to do anything owing to his affection for Duryodhana. At the end of the ensuing conversation, Dhritarashtra requested Vyasa himself to teach his evil minded son Duryodhana.

Vyasa decided to leave saying that Rishi Maitreya was coming to see them after having spent time with Pandavas in the forest. This great Rishi will be instructing Duryodhana and if whatever he says is not done, he will be cursing Duryodhana, for sure. In a few moments, Vyasa went away and Maitreya appeared.

The king and the others received the Rishi in accordance with proper rituals and exchanged courteous questions of which one was about the well-being of the Pandava brothers in the forest. Maitreya replied that he saw Dharmaraja Yudhishtira in the Kamyaka forest, who had matted hair and wore deer skins. In that hermitage where many sages had assembled, the Rishi heard about the evil course of actions that happened during the gamble match. He criticized king Dhritarashtra for having allowed such a terrible thing to happen. Then sage Maitreya turned towards Duryodhana and started speaking to him in soft tones.

Maitreya praised Duryodhana initially for his intelligence. He then said that all his words are intended towards the welfare of Duryodhana alone. He told that Pandavas were brave warriors and had unequalled strength and they followed the truth. They, while living in the forest, have killed many Rakshasas like Hidimba, Baka and Kirmira and even powerful kings like Jarasandha. They had Vasudeva as their relative and Dhrishtadyumna as their brother in law. “Therefore, do not fight with them, instead do what is good for you and good for them and good for the whole Kuru dynasty. Otherwise, you will be exposed to death by them!”.

While Maitreya spoke thus, Duryodhana smiled, scornfully perhaps, and drew patterns on the ground with his feet. All the while, with his arms slapping his own thighs, without responding anything at all.

The supreme sage Maitreya got angry seeing Duryodhana ignore him and drawing patterns on the ground. His eyes turned red and he raised his hands and cursed Duryodhana, “Since you ignored me and you did not find my words attractive, you will soon reap the fruits of your insolence. In the great war that will result from the enmity created by you, the powerful Bhima will smash your thigh with the blow of a club.” Dhritarashtra who got shocked by these words tried to pacify the Rishi and sought forgiveness. Maitreya replied, “O King, it is only if your son makes peace then what I have said won’t happen. But if the opposite occurs, it will happen.” Suddenly deviating from the objective, the King asked about how Kirmira was killed by Bhima in the forest, to which a reluctant Maitreya said that he won’t be narrating this since Duryodhana finds no favour with his words. He added that Vidura would tell the details and left the place. Soon Duryodhana too left quite anxiously.

This episode of Maitreya Shapa (curse of Maitreya) is a small part of the itihāsa, like a lake is to an ocean. But it has its definite ripples in the overall drift of the storyline. Let us have a look at three important things.

In this part, Duryodhana is an exact replica of a modern day dude who has shut his ears to the wisdom of a more knowledgeable one. One getting bored listening to the wise elders is a perfect “Duryodhana syndrome”.

This implies that the curse was not a pre-destined outcome but is something which would be decided by Duryodhana’s future course of action. When you understand in this sense, the curse could only be considered as a pointer towards the end result of a long sequence of evil actions. Duryodhana always had the free will to get release from it. Exposing his naked thigh to Draupadi, shaking the legs and all were just adding towards his karmic account whose final result was the ‘thigh break’ death.

Mahābhārata surpasses all other compositions in the accurate portrayal of human emotions, complex characters and enigmatic ideas. A baffling problem which would have bothered us always, is the occurrences of śāpa and śāpa moksha in our ancient scriptures. On one hand, Rishis are presented as ones who have displayed unparalleled self-control and ones who have dedicated their lives for spiritual austerities. But when such highly worshipped beings fall prey to temporally challenging situations and discharges curses on erred fellow beings, our logic and ideas get defied. How could such a high principled soul curse a mundane human?

This extract from Mahābhārata, elucidates this dubiety. First of all, there is no scope of an argument that this particular case was not a curse. Mahābhārata itself has named this portion as the tenth adhyāya (दशमोऽध्याय:) as Maitreya śāpa. In the Sanskrit statements quoted earlier from Maitreya also, the appearance of the word ‘śāpa’ is to be noted. So this is a śāpa and hence a curse. As discussed earlier, the curse could only be considered as a pointer towards the future and Duryodhana always had the free will to change his destiny. In this light, if we look at all the different curses appearing in our treasure house of scriptures, they too are indicators of the terrible fruits of the evil actions of the concerned. We have to acknowledge the fact that such sages and seers were just hinting at the devastating end result of some rash actions of that particular character. These Rishis are not the primary cause of that approaching catastrophic destiny; while the doers of such actions, alone are! 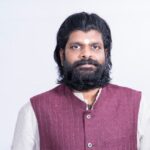