Bhoota Aradhane: Where ‘Possession’ Is An Art 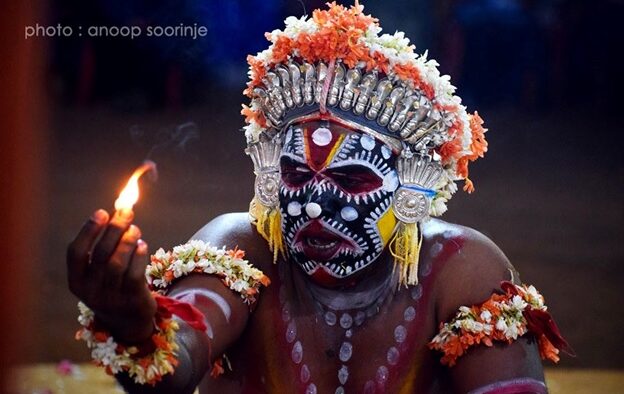 Tulu Nadu (ie, Dakshina Kannada and parts of Udupi district of Karnataka) is known for its unique cultural heritage. An important part of its culture is ‘Bhoota Aradhane’ (also known as Daiva Aradhane) or Spirit worship.

This ritual, also called ‘Bhoota Kola’ or ‘Nema’, is characterized by storytelling (in ballads or ‘paddanas’), which extols the virtues and deeds of the spirits, thereby inviting the spirit to possess the impersonator, who dances nightlong to rhythmic hypnotic drum beats.

This dance is highly stylized and is held in honor of the 400+ local spirits – each of whom has a unique story, which is preserved orally in the form of ballads and is handed down from generation to generation orally.

The Bhoota Kola ritual provides a magical insight into the world of spirits through a unique combination of colors, costumes, story-telling, dance, and music. Post the ritual, the faithful receive blessings and confidence from the spirit to face any problems in their life head-on.

In some cases, the spirit may also solve interpersonal or village disputes (arbitration) and provide guidance or demand future propitiation if not satisfied with the arrangements.

Similarly, other deities include ‘Prithvi’ (Earth), Varuna (the sea), Vayu (air), and Surya (The Sun). Worship of various forces of the cosmos (including spirit worship) forms an integral part of Hinduism.

We met Mr. Abhilash Chowta, an expert on the nuances of Bhoota Kola, and a Tulu culture enthusiast. He participates in these rituals as a ‘Patri’ or a ‘Mukkaldi’ (ie, the person who talks to the spirits and acts as a mediator between the spirit and the people). Having a diploma in Civil Engineering did not prevent him from preserving this art form carried on by his ancestors from generations. 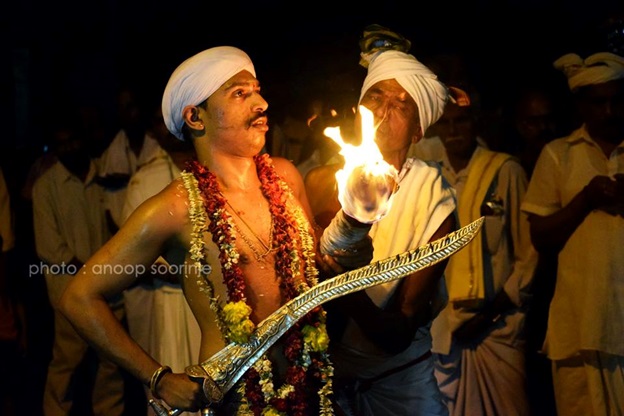 Abhilash Chowta, in his role as a ‘Patri’, during the Bhoota Kola. PC – Anoop Soorinje/ Beauty of Tulunad

Abhilash opines that spirit worship is as old as civilization. Primitive humans feared the wrath of nature. Hence, they worshipped nature so that no harm may befall them. This ‘spirit of nature’, in its all-pervading, transcendental form was referred to as “Bherme’’ in Tulu Nadu.

“Ironically, spirit worship began due to fear (because spirits themselves are feared in present times). Man feared tigers and snakes – which posed a threat to their lives, feared wild boars – which destroyed their crops. Hence, a man began worshipping the spirit of Tigers (Pilichandi) and boars (Panjurli) pleading protection to his life and crops. Spirits are also worshipped to protect against the wrath of the sea, for the health of cattle, for a good harvest, for protection against diseases, etc.” he says.

Classification of ‘Bhootas’ or ‘Daivas’

Human Origin: These are spirits of human beings who have actually existed, and have been elevated to the status of a ‘Daiva’ for some significant achievements like revolting against the feudal administration (Koti-Chennaya), fighting against injustice and cruelty (Kalkuda-Kallurti) leading to a tragic death or ‘veergati’ (martyrdom).

Animal Origin: These are spirits of animals such as wild boars (Panjurli), bulls (Nandigona, Maisandaya), tigers (Pilichandi), etc, which were used for agricultural purposes or feared by human beings.

Nature Origin: These are the spirits pertaining to the five elements of nature (ie, air, fire, water, soil, and space)

Puranic Origin: They are mythological beings originating from Vedic texts, such as Veerabhadra, Guliga, etc.

Classification of Bhootas based on Status

In Tulu culture, ‘16’ is considered to be an auspicious number. The mourning period for Tuluvas are for a period of 16 days (unlike the usual 13 days). The administrative units of Tuluva Kings were also in multiples of 16. Although the administrative and judicial significance of these units are irrelevant today, there are still relevant in the context of spirit worship.

A spirit may be worshipped in the status of a Rajan Daiva (royal spirit), Seeme Daiva (district spirit), Guttu Daiva (estate spirit), Kutumba Daiva (family spirit), and so on, depending upon the unit worshipping the spirit. Similarly, there are 16 ‘Katle’ (or types of rituals) to be performed in order to please the spirit.

An Overview of the Ritual 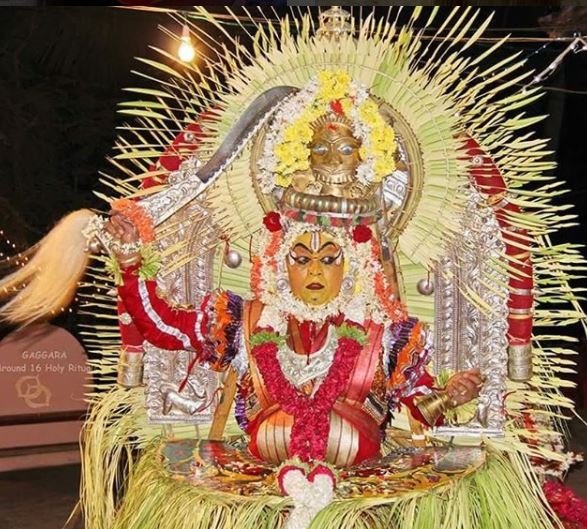 An Impersonator wearing an ‘Ani’ or a halo. PC – Gaggaraaround16HolyRituals @Instagram

Preparations for the night-long ceremony begin in the evening, with the arrival of the ‘Bhandara’ (ie, the paraphernalia of the spirit) to the beautifully decorated ritual site. The paraphernalia includes weapons such as sword, shield, trident, and ornaments such as headgear, masks, and jewelry.

The impersonator is given oil for the ritual bath to purify himself and formally invoke the spirit. A female member of his family sings the ballad that narrates the origin of the Bhoota, the significant events of its life, heroic deeds, virtues, etc. On hearing the ballads, the spirit possesses the impersonator, which is evident from the convulsions in his body.

The impersonator adorns himself with elaborate costumes, applying appropriate colors on his face, wearing the “Gaggara” (anklets) and jewelry belonging to the spirits. His attire is complete with a coconut leaf skirt accompanied with the ‘Ani’ (signifying the halo stringed to the back of the impersonator)

A ritual typically has 16 steps, which are meant to propitiate the spirit. It includes dancing to loud rhythmic hypnotic music (drums and Shehnai), making ritual sacrificial offerings to the spirit – which include rice, chicken, etc. The possession by the spirit provides them the energy to dance all night, bear a great amount of heat caused by fire, walk on coal, cause a great appetite – to drink 7-8 tender coconuts and even partake raw chicken blood and meat, with puffed rice.

Post this, in a highly stylized language, he assures protection and prosperity, if pleased with the ritual, and demands future propitiation if not satisfied. After the ritual, the impersonator typically is not able to recollect the events and describes the experience as a ‘trance-like’ or ‘sleep-like’ state.

The Spirit impersonator usually belongs to three Scheduled Castes – ie, Nalike, Parava, or Pambadha. These communities are called “Visha-makkala” or bearers of poison. As per common belief, any other ordinary individual cannot bear possession by the spirit and would die instantly if possessed. The most backward, simple, and innocent castes were chosen to be spirit impersonators.

This is because, in bygone days, the divine spirit used to administer justice and solve interpersonal and village disputes. Having a simple and innocent minded person as an oracle would yield genuine prophecies and would eliminate any suspicion of foul play, boosting the confidence of people in the justice and solutions offered by the Spirit.

History is evidence that even the British administration kept a close watch on the prophecies of oracles, as a large number of people believed in it. 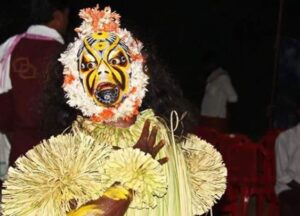 The belief in the power of spirits to influence life is deeply embedded in the psyche of Tuluvas. Even with the growth of scientific temperament, the culture of spirit worship is still going strong. This is evident from the fact that the Bhoota Kolas in some of the Temples have been pre-booked for the next 12-15 years. The words of guidance or reprimand uttered in a possessed state (referred to as ‘Nudi’) are still highly valued.

Abhilash says that in his experience as a Mukkaldi, he has come across cases wherein the divine intervention of the spirit has resolved property disputes. He also goes on to narrate an incident wherein a thief returned the donation box of the spirit after he lost his mental balance post the theft for no apparent reason.

After he returned the donation box and sought forgiveness from the spirit, he miraculously started recovering. Several other stories such as items lost-and-found, childless women conceiving after the intervention of the spirit are a common part of the grapevine discussions of Tuluvas.

The popularity of spirits among common folk stems from the fact that spirits are more approachable vis-à-vis, God, as God does not directly appear before anyone. In the case of spirits, one can interact, share problems and get guidance or reprimand instantly, as an impersonator is treated akin to a spirit during possession.

Further, the entire caste table gets inverted during the ritual – high caste landlords have to prostrate before a low caste impersonator, even as the spirit addresses them in the singular tense. Thus, it is a great social equalizer.

Spirit worship even promotes communal harmony in the region – given that even Muslims worship Hindu spirits and vice-versa (Bobbarya, a Muslim Spirit is worshipped even by Hindus). Spirits themselves come from all castes and communities across the social spectrum like Brahmins, Dalits, Muslims, Bunts, etc.

Explaining its popularity, Abhilash says – “Gods are benevolent and merciful, whereas spirits are merciless and will kill if there is provocation or injustice. Even a King would be dragged from his high throne and reduced to dust if he incurs the wrath of the spirit. Thus, a king is required to act as per Dharma and administer justice, lest he makes the spirits angry. This is part of the charm of spirits and explains why the common folk love spirits. Spirits have to be adored and treated like a family member – one who shares your happiness and pain. During bygone days, even the swords and other weapons of the spirits were used during the war, and not merely kept in Temples. This is the fundamental difference with spirits”.

There is a saying attributed to the spirits of Tulu Nadu: “Nambidinayan kai budaye. Nambandinayan nambave” (I shall not leave the hands of those who believe in me and shall cause the non-believers to fold their hands before me”). Hence, believe it or not, the cult of spirit worship is not going anywhere, anytime soon.