Avatara, Amsha, and Avesha in the Mahabharata 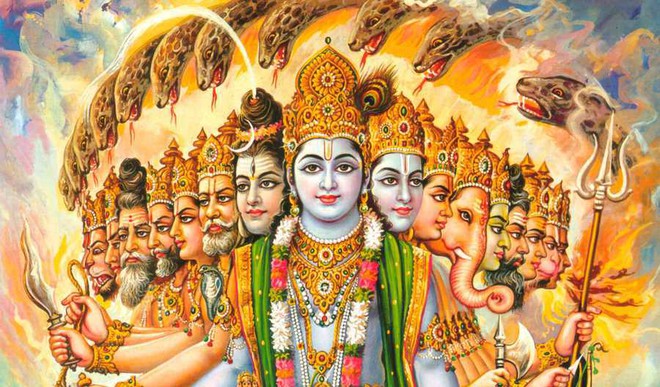 Over the past many centuries, generations of Hindus have taken resort to the Mahabharata for finding meaning in life. The Mahabharata is the repository of knowledge for Sanatana Dharmikas. It is the source of Dharma.

The Bhagavadgita is the epitome of knowledge on Bhakti and Vairagya. The Vishnusahasranama is the constant companion of believers at the time of joy and distress alike. The Mahabharata itself says:

Naturally, an encyclopedia such as the Mahabharata has been dissected from various angles, depending upon the intent and curiosity of the reader or researcher. Some see it as a normal family drama between warring cousins. Others find it an interesting historical event reflecting the political and social equations of an era gone by.

On the other side, there are people who find philosophy in every incident in the Epic. Those on the path of Bhakti read the glory of Sri Krishna in every word of the Mahabharata. Thus, the same grantha has opened up in different ways to different ‘sadhakas’. It is also a reflection of the greatness of this work that it is able to, simultaneously, satisfy the inquisitiveness of so many kinds of seekers.

The Devatas or the Gods are personifications of ‘sad-guna’ or auspicious qualities while the Asuras are the harbingers of evil attributes. The characters in the Mahabharata are clearly identified as being the personification of different Devatas and Asuras. The behavior of the people in the Epic becomes very interesting, and explainable when such identification is made.

The Mahabharata took place at the cusp of the 28th Dwapara and Kali Yugas for one primary reason. Bhudevi, or Mother Earth, was overburdened with evil and they had to be gotten rid of. The evil on Earth was represented primarily by the numerous Kings ruling different parts of Earth. The Devatas approach Sri Hari and he promises to perform ‘Bhu-Bhara-Harana’ (reduction of the load on Earth) for them.

For this purpose, he decides to take ‘Avatara’ on Earth as Sri Krishna. At the same time, he indicates to the Devatas that the evil Kings and their allies are none other than the Asuras who have taken birth. Therefore, the Devatas too are to take birth in various forms on Earth to perform their service to Sri Krishna in the task of eliminating evil. This, the Devatas, diligently undertake.

Hence, most of the characters in this great grantha are personifications of Devatas or Asuras.

The rest of this article attempts identifying the main characters of this Epic in terms of their original form – the ‘Moola roopa’. The sources for this information are the Mahabharata itself, along with the Srimadbhagavata and the Harivamsha.

Before we proceed, it is important to understand three terms involved.

Avatara: An avatara is the taking birth of the particular soul in a material body on Earth. The soul can be that of a Devata, an Asura, or Daitya. The Avatara, on the physical side, obeys the laws of nature such as birth, aging, disease, death, and so on.

Of course, these rules are obeyed in accordance with the mandate of the particular Yuga. For e.g. the average age of an individual in the Dwapara Yuga is said to be 1000 years.

The Tattvavada philosophy (popularly known as the Dvaita Sampradaya) of Sri Madhwacharya gives prime importance to the concept of Taratamya of Jeevas or ‘Hierarchy of Souls’. Each soul is unique and eternal and most importantly distinct from Parabrahman. This applies to the Devatas and Daityas too of course. Therefore the capabilities and strengths of each soul is different, which reflects in their accomplishments when they are born as Avataras.

The Supreme Parabrahman, Sri Narayana, also takes Avataras on Earth. The restrictions of a material/mortal body does not apply to the Avataras of Vishnu, as he is the Supreme Brahman. Hence the interpretation of his actions on Earth are to be interpreted using a different measure (outside the scope of the present work).

Amsha: An amsha is the permanent presence of a soul (of a Devata or Asura/Daitya) in a body whose primary occupant is another soul (jeeva). Thus, when a person is said to have an amsha, that particular body has the presence of two souls simultaneously. Such an arrangement brings out the otherwise inexplicable behavior of many characters of the Mahabharata. Some examples will be touched upon later. The amsha-jeeva leaves the body only along with the main jeeva.

Avesha: An avesha is similar to an amsha except that the presence in the body of another soul is for a temporary period. The well-known phenomenon of possession of the body by pisachas is a reasonable example to explain aveshas. A person may undergo the avesha of another jeeva repeatedly as well. The extent of awareness of two souls existing in the same material body is different from case to case.

Therefore, a thorough knowledge of the Avatara Leela of Devatas is very essential for Bhakti to progress. Similarly, knowing the actions of Daityas in their Avataras helps us avoid pitfalls in sadhana. With this background, let us go through the details of the Avataras, Amshas, and Aveshas of the characters of the Mahabharata.

Avatara, Amsha, and Avesha in the Mahabharata

Sri Krishna: He is the avatara of Sri Narayana, the Parabrahman.

The Pandavas: They were the avataras of the highest ranked Devatas.

Arjuna: Avatara of Indra, along with the Aveshas of Sri Hari, Vayu and Nara. These additional aveshas explain his extra-ordinary stature in the Mahabharata, and the close friendship with Sri Krishna.

Nakula – Sahadeva: Avataras of Ashwini Devatas, along with the Avesha of Mukhyaprana.

Draupadi: Avatara of Bharati, with the Aveshas of Parvati, Shachi, Shyamala, and Usha.

The Kauravas: They were the avataras of the most evil Daityas.

Main characters in the Mahabharata:

Bhishma: Avatara of a Vasu named Dyu. Had the Avesha of Brahma.

Drona: Avatara of Devaguru Brihaspati, with the Avesha of Brahma.

Kunti: Avatara of Siddhi, who was the wife of a Marut named Paravaha.

Karna: Avatara of Surya, along with the Aveshas of Sri Hari, Sahasravarma and Narakasura. The presence of Sri Hari in him explains his great skills. The Avesha of the two Daityas explains the evil he perpetrated and supported.

Satyaki: Avatara of the presiding deity of Krishna Paksha along with the Avesha of Samvaha and the Sudarshana Chakra of Sri Vishnu.

Madri: Avatara of Dhruti, who was the wife of a Marut named Paravaha.

Dhritharashtra: Avatara of a Gandharva Raja called Dhritharashtra, along with the Avesha of Vayu. The presence of Vayu explains his great strength.

Ghatotkacha: Avatara of Nirruti, along with the Avesha of Shiva.

Abhimanyu: Avatara of Budha, Amsha of Chandra and Avesha of Sri Hari, Vayu, Indra, Yama, and Ashwini Devatas. The presence of so many Devatas explains his extraordinary valor, courage, and strength.

Other characters in the Mahabharata: 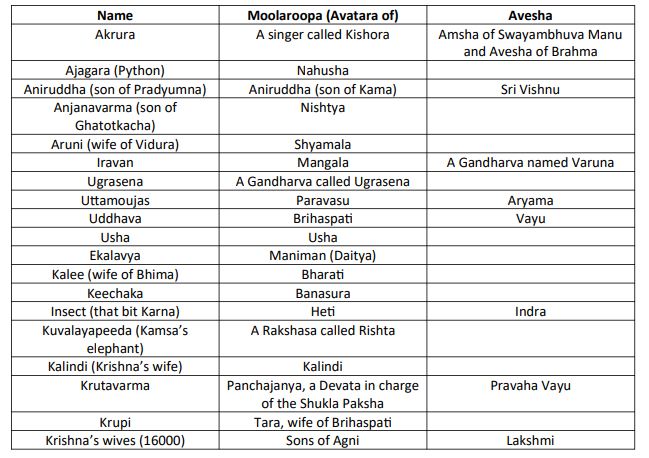 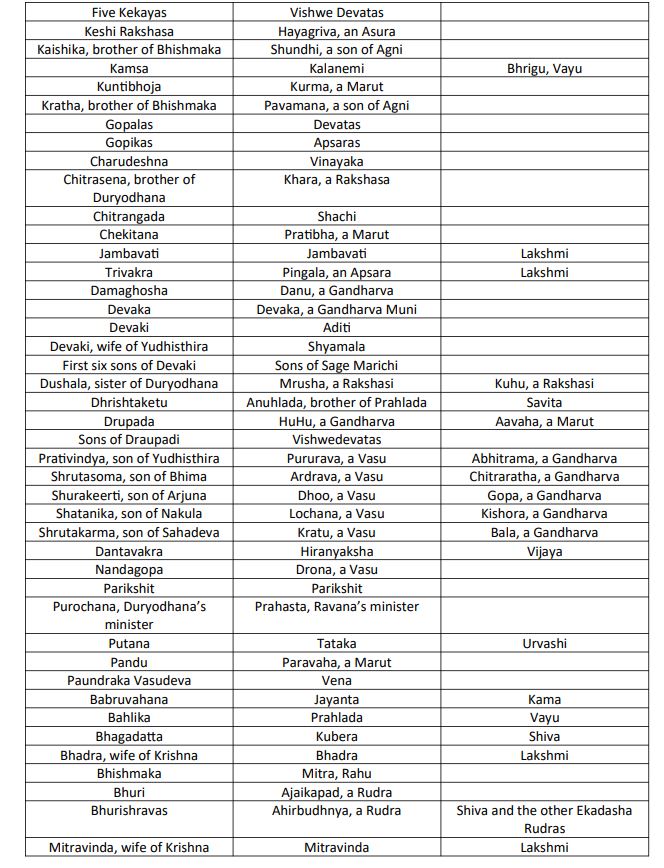 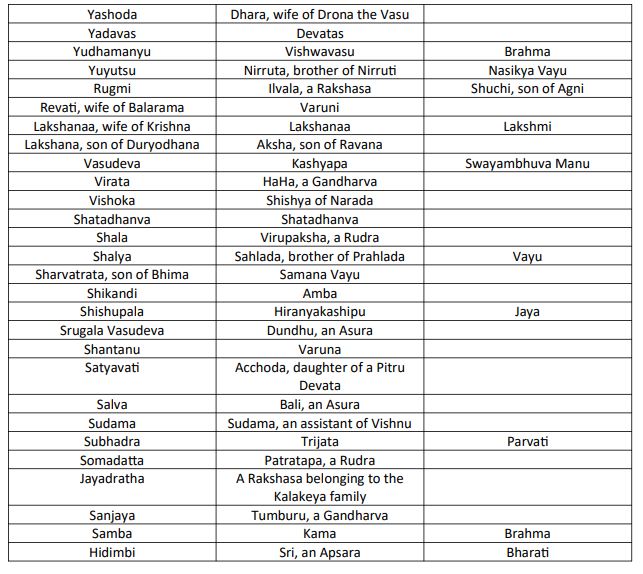 Interpretation through knowledge of Avataras

When we realize the Devatas and the Daityas behind the characters of the Mahabharata, the interpretation of several of the events or incidents in the grantha becomes that much easier. The extraordinary deeds of some warriors, the unnatural behavior of some others, the strength of some people, and so on. All of these become well understood when we understand who the personalities really were.

A few examples will highlight this:

Dhritharashtra, even though blind throughout his life, was exceedingly strong. At the end of the war, he is able to crush an iron image of Bhima. Sri Madhwacharya explains this by highlighting that Dhritharashtra had the avesha of Vayu in him. Hence the strength.

Kamsa’s character is another difficult one to explain. He is evil personified, yet suddenly he showers affection on his sister Devaki. This is due to the presence of two personalities in him. The Kalanemi Rakshasa in him is responsible for all evil deeds while the Avesha of Sage Bhrigu causes him to have great affection for Devaki, and also immense knowledge of Shastras, which he reveals from time to time.

Balarama is the Avatara of Shesha. In the Dvaita sampradaya, he is lower in the hierarchy than Vayu. This begs the question of how Bhima, the Avatara of Vayu, went and studied under Balarama, who is lower than him. Sri Madhwacharya explains this beautifully using the concept of Avesha. Balarama, whenever he taught Bhima, had the Avesha of Vishnu, which made him temporarily rise in hierarchy than Bhima.

In fact Sri Madhwa says that whenever Bhima hit the mace against Balarama, as part of his training, it was so because the Avesha of Vishnu was absent in Balarama at that time. This incident is a very good example of how Avesha works.
Satyaki is one of the great warriors of the war. He stays alive in the end, unlike most others. When we understand that he was the Avatara of the Sudarshana Chakra of Vishnu, the reason for his extra ordinary abilities becomes clear.

The knowledge of Bhishma is due to the Avesha of Brahma in him, although he is the Avatara of only an ordinary Vasu. If one understands the Suktas in the Rig Veda related to Brihaspati, they show a dual character of him. On the one hand, he possesses great knowledge and is the teacher of the Devatas. On the other hand, he participates in many wars as well and is a warrior. The character of Dronacharya exactly reflects this dual nature of Brihaspati.

The evil undertaken by Karna is due to the presence of the Daitya Sahasravarma inside him. After he gives away his Kavacha (which is where the Daitya used to reside), Narakasura enters inside him. Thus, throughout his life, he accompanies evil and performs the same. Being the Avatara of Surya, on the other hand, he naturally possesses radiance, valor, and the habit of giving.

Every personality in the Mahabharata can be similarly analyzed, and a proper explanation for their roles and behaviors arrived at. Any attempt at understanding the extraordinary work that the Mahabharata is must include the knowledge of the Avatara-Amsha-Avesha of the personalities.