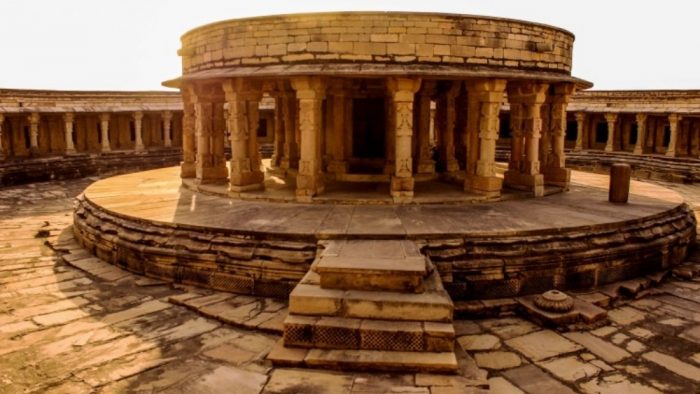 Morena witnessed the last great bout of temple-building activity in the Kachhapaghata Era, lasting from the late 10th century to late 12th-century C.E.

The tradition of building great temples in Morena under the Gurjara-Pratiharas was preserved when the region came to be ruled by the Kachhapaghatas.

They were a regional dynasty who had accepted the vassalage of the Gurjara-Pratiharas. However, the Pratiharas were weakening in the 10th century C.E. Many regional vassals found it appropriate to declare independence. The Kachhapaghatas was one of these dynasties.

The Sanskrit inscription at the magnificent Sahasra-Bahu temple at Gwalior attributes this victory of the Kachhapaghatas over the ruler of Kannauj.[1]

The Kachhapaghatas ruled from Gwalior. Their sister branches later ruled from Sihoniya in Morena, Dubkund in Sheopur, and Narwar in Shivpuri.

Their reign in the Morena and Gwalior-Chambal region extended over more than two centuries, starting from 975 C.E. to till the end of the 12th century.

From the vantage of Indian history, they were a small kingdom, almost unknown outside their sphere of influence. However, to a student of Hindu architecture, the contribution of the Kachhapaghata is as great as that of the Hoysalas in Karnataka, or the Kakatiyas in the Telangana.

Building a great temple was a definite way to inscribe one’s name in the annals of history and hence the rulers outpaced each other in building great temples.

One of the greatest architectural wonders of Morena is the Kakanmath Shiva Temple, situated near the village of Sihonia (derived from the ancient ‘Simhapaniya’).

Built by Kirtiraja Kachhapaghata in 1015 C.E. in the style of the Khajuraho group of temples, it is a marvel to behold. It is more than 150 feet in height, and its mandapa has two stories. The temple has mukhamandapa, ardhamandapa, and mahamandapa after which there are the antarala and the garbha-griha. 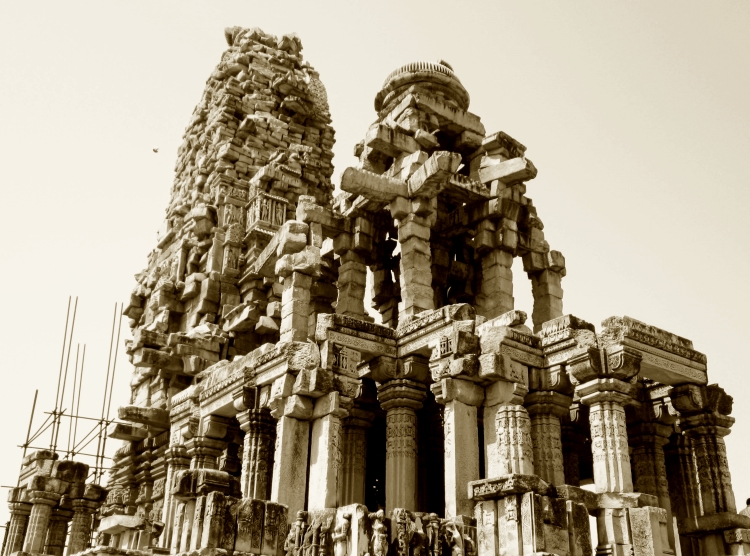 The mahamandapa is marked by its two stories. All of these features accentuate the vertical profile of the temple, conforming to the idea of the Hindu temple as Mount Meru.

The hypostyle pillars of the mahamandapa extend around the garbha-griha of the temple, forming a partially enclosed pradakshina patha (ambulatory passage). On the three sides of the walls of the garbha-griha there are gavaksha udgama with ratha niches containing deities.

All of these beautiful sculptures, almost without exception, are in ruin, victims of the fury of the devout Muslim invaders.

Even in its ruined condition, it reflects the majesty it must have exuded before it was destroyed by the Islamic invaders.

Kakanmath was destroyed by the armies of Aibak and Illtutmish in the 13th century.

In the Mughal period too, this region suffered the rage of Islamic iconoclasm. It also suffered several setbacks during this era, but the basic structure has survived.

Another wave of iconoclastic fury swept over the region under the reign of the later Mughals, particularly Aurangzeb. During the 19th century, the Kakanmath temple fell to neglect and obscurity. It was only in the 20th century that it was reclaimed as Indian heritage.

Chausath Yogini Temple, Mitavli in Morena is one of the rarest of Hindu temples in India. Its plan is circular and it is dedicated to the Tantric sect of Chausath Yogini.

Most of the Hindu temples are based on a square or rectangular plan. Circular temples are very rare.

It is said that the design of Indian Parliament is inspired by this temple in Morena.

It is also a very rare temple as there are only about a dozen Chausath Yogini temples in India. A Yogini in Tantra means a practitioner of Yoga, who has controlled her desires and reached a higher stage of spiritual evolution.

The Yoginis are related to the Matrikas and are basically various manifestations of the Divine Goddess Durga. This association with various forms of Durga gave rise to the sect of Chausath (64) Yoginis over time. 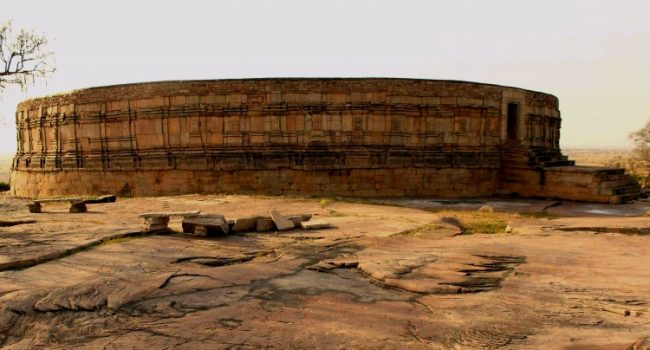 The Ekateshwar Chausath Yogini temple of Morena has an outer circle of 64 subsidiary shrines of Shiva with a central shrine of the Yogini. According to an inscription, it was built by King Devapala of the Pala dynasty of Bengal in the 9th century in the Pratihara style. However, some claim that it was built by the Kachhapaghata dynasty itself.

Padavali is a small village, about two kilometers away from the great site of the Bateshwar Group of Temples.

A fort named Garhi Padavali was in use even as late as 19th century C.E. Inside the fort, there are remains of an ancient Shiva Temple, built by the Kachhapaghata dynasty in the 10th century C.E. In its sculptural richness, it rivals even the Khajuraho Group of Monuments.

The Shiva temple was originally built on a high adhisthana with a mukhamandapa, ardhamandapa, mahamandapa, and the garbha-griha. [120, Willis and Maroo]

The garbha-griha has now completely disappeared. It was destroyed during the ravages of the Sultanate Period, then under the Mughals. Many of the statues are defaced, as their frank expression of sexuality would have offended the devout sensibilities of the invading Muslim among other things. 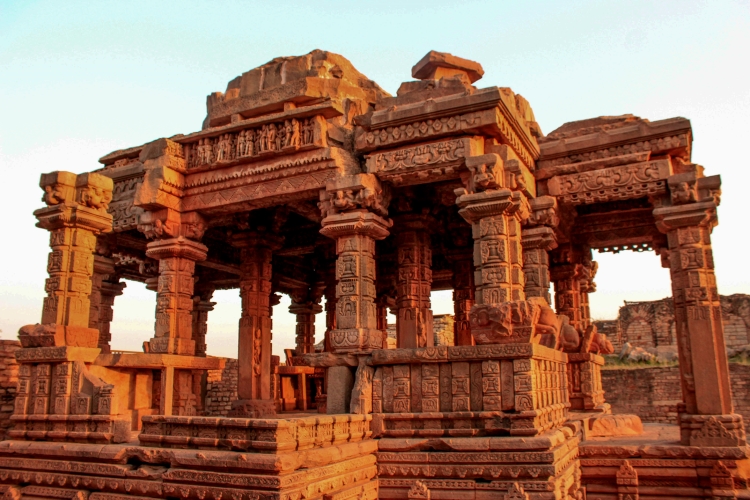 The most astonishing and the most endearing part of the mandapa is its ceiling. It is carved in exquisite detail and the carvings are pervasive. Many of the friezes depict scenes from the Ramayana, the Mahabharata and the Puranas. “The story of Rama with Kausalya, Rama with Vishwamitra, Sugriva, the birth scenes of Krishna, events like the killing of the demon Putana, Sakata Bhanga, Dhenuka-vadha etc. are also depicted.” [120, Willis and Maroo]

Also depicted on the ceiling and pillars of the mahamandapa are the scenes of guru-shishya and surasundaris. The temple is dated at the 10th century C.E. Profusely sculpted, it is one of the glories of the Morena district.

Another 12th century Kachhapaghata temple is located in the village of Ainti, a Surya temple.

Although in the garbha-griha we can see a Shiva Lingam, the defaced statue at the lalat bimba (lintel) of the doorway depicts Surya riding through the sky in his chariot in all glory. He is flanked by the sculptures of Uma Maheshwara. This clarifies the fact that it is a Surya temple and not a Shiva Temple.

In the middle ages, it was destroyed by Islamic invaders in a brutal raid. The artists and artisans were all killed or starved to death, and some fled to safer regions. Therefore, there was no one skilled enough to reinstall a replacement idol of Surya.

Shiva Lingam, on the other hand, is relatively easy to sculpt and hence the poor and simple villagers installed a Shiva Lingam to preserve the continuity of worship. 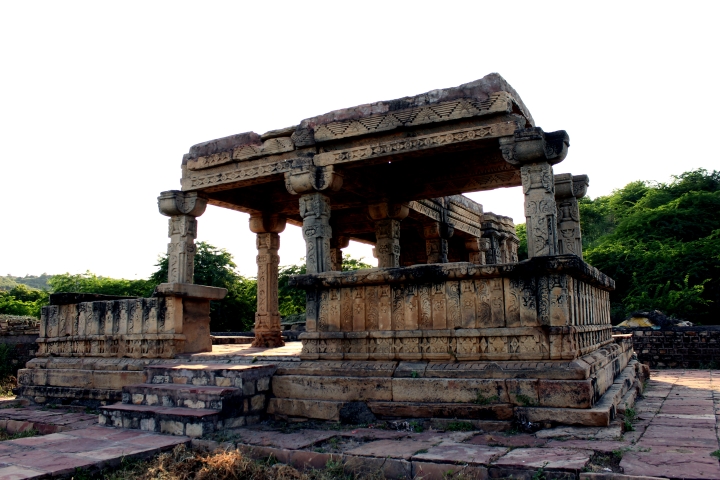 These Kachhapaghata temples of Morena are its greatest heritage. An important point to notice about the location of these temples is that all of them are now either very small villages or completely uninhabited, amidst woods.

This defies a commonly-held belief that the medieval kings must have built huge temples in the middle of forests. As the records suggest too, these places were great towns and cities in their heydays.

The repeated Islamic invasions forced the populations to abandon these cities altogether, accounting for their present isolated and remote locations.