Ancient Temples and Modern Dacoits Part III: The Architectural Workshop of the Gurjara-Pratiharas 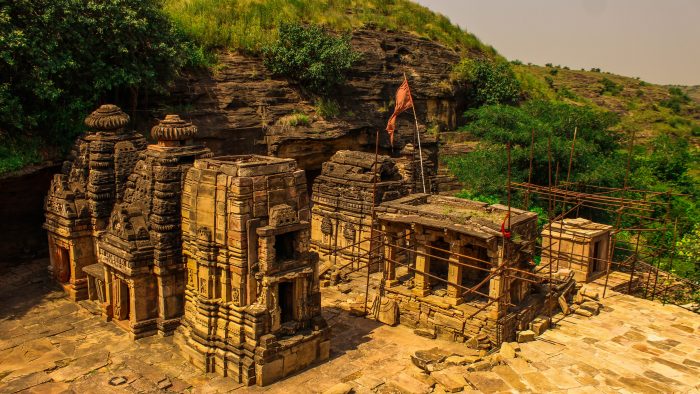 If there is one dynasty in north India that has left a lasting imprint on the architectural style of the region than any other, it is the Gurjara-Pratiharas.

Morena was no exception.

More than half of the great temples of Morena were built by the Gurjara-Pratiharas or inspired by their architectural style.

The Great Laboratory of Naresar

There is a group of around 22 temples in the Naresar village in Morena district. These temples were built in the 8th century by Yashovarman and Amaraj of Kannauj. Albeit built by independent rulers, the architecture of these temples belongs to the Pratihara style, the dominant style of the region.

Hindu temple architecture witnessed great experimentation in the seventh century. The temples at Naresar exhibit the early stages of the nagara temples, with a precursory antarala, curvilinear shikhara, and a square plan. The site also hosts the first example of the Valabhi shikhara in India.

Two of the earliest temples that are 1400 hundred years old have phamsana shikhara, (the pyramidal shikhara of successively decreasing pillars going up), popular in the early stages of Hindu temple architecture. They are similar to the Brahma temple at Khajuraho.[1]

Half of the temples are situated beside a lake and the other temples are approached by descending a flight of steps to a cliff overhanging the Naresar valley of Morena. 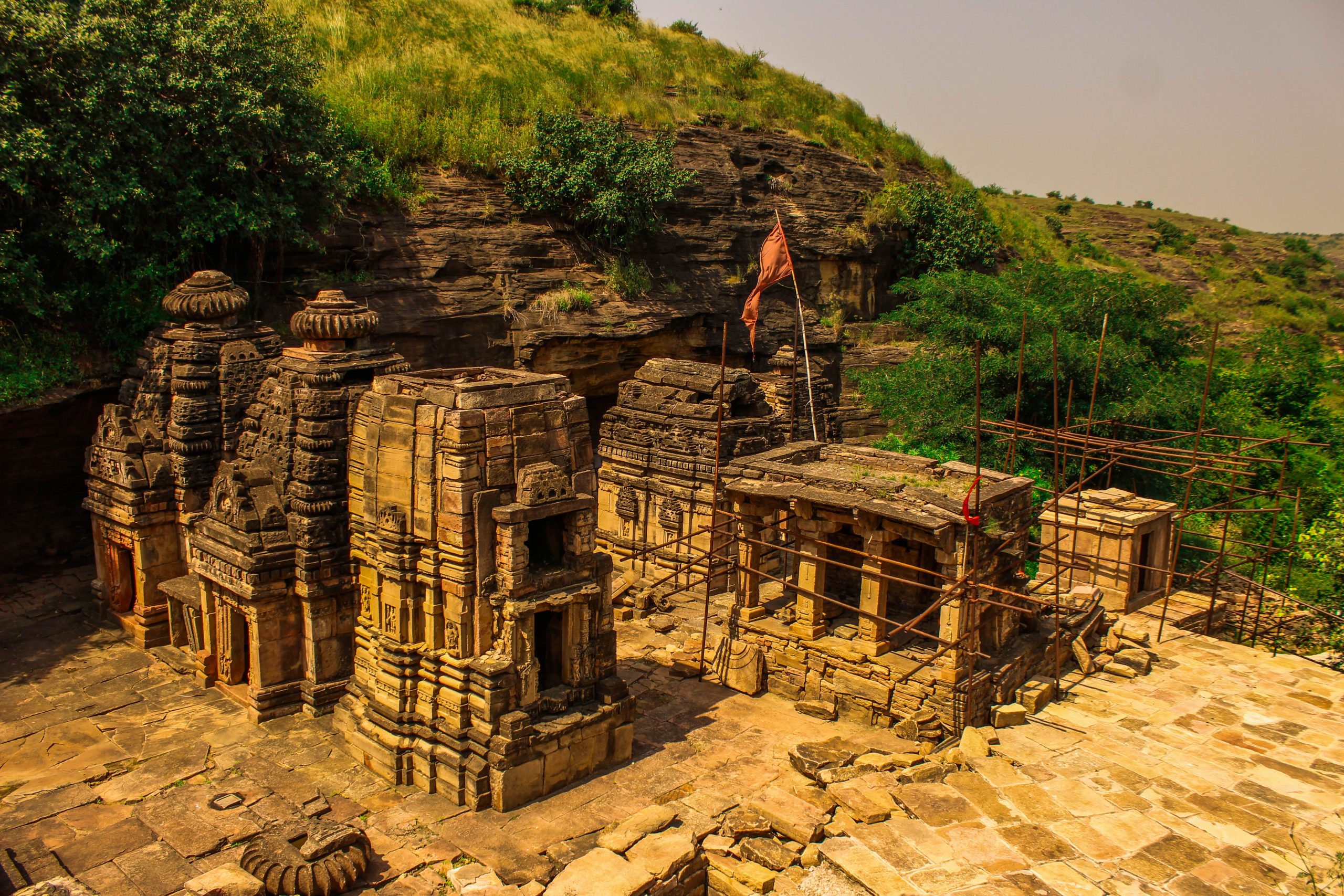 Most of these temples consist of a garbha-griha and a narrow antarala inside the doorway. Some of the temples have the peculiar plan of a pancharatha jangha and triratha shikhara.[2]

The jangha of the temples contains bhadra niches in pilasters and pediments. The doorways are the features to be marvelled at. The figures of Ganga and Yamuna along with chhatradharinis flank both sides of the door while other deities, surasundaris are on the three niches on both of the two pillars.

The lintel sometimes displays the saptamatrikas and Ganesha, and sometimes other deities. The main deity of the temple is generally carved in a central udgama niche on the lintel.

However, as we remarked earlier in the series, the lamentable fact is that it is almost completely lost to the outside world. It is one of the hardest temple sites in Morena to visit, despite being just five kilometres from the main road.

From the highway, one has to turn to a dusty unpaved lane, and go through fields for about two kilometres. Parking the vehicle in jungle, one has then to hike through two hills, cross the riverbed of a seasonal river, go through still more fields, then through a lake, before one stumbles upon the breathtaking site of Naresar overhanging a cliff, overlooking the Naresar valley in Morena.

And all this through dacoit-infested lands.

It is an immensely rewarding view and the temples are great works of art but except for a few courageous travellers, it is not possible to visit these sites. Unless the government builds better infrastructure, these sites will go to permanent ruin, as the mining activity in the area is already inflicting enough damage upon the temples.

The Bateshwar Group of Temples

The Bateshwar Group of Temples comprises about 44 temples spread over an area of 25 acres, built across the sloping hills at Bateshwar, Morena.

Most of the temples are dedicated to Shiva or Vishnu. They were built during 8th and 10th century C.E. by the Gurjara-Pratiharas. Most of them are built in the nagara style with a simple shikhara, no mandapa and a small precursor of antarala.

The nagara style shikhara is topped with an amalaka or two in some cases, and a pot finial at the top. The shikhara is triratha with a mesh of gavaksha arranged in a line, reaching up to the top. A minority of the temples have a simple mandapa with two pillars and no enclosing walls. The entire platform makes for a very impressive sight.

A scientific study of the temple reveals that the construction of the temples was carried on over centuries constantly, up to the 11th century A.D. It was then halted abruptly due to the Islamic invasions.

As a result, many temples are left unfinished and all of them are desecrated. 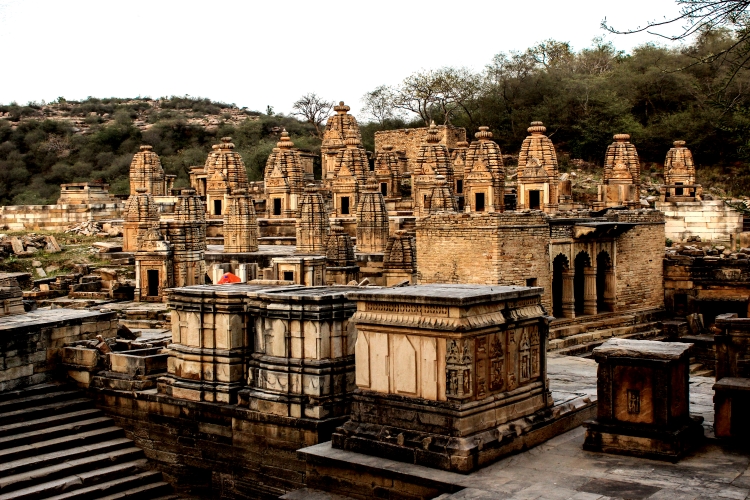 Situated in the ravines of Chambal, in the very remote areas surrounded by scrubland jungle, it still is a dangerous site to visit. Until a few years ago, the dacoits used to stay on the temple site. The area is now free of dacoits. In the midst of the temples, a stepped well is constructed, which still serves as a source of water.

The temples are constructed from the locally-quarried yellow sandstone with a reddish tinge. Juxtaposed to the red sandstone of the Jaipur region, the Chambal Valley is famous for the yellow-white and yellow-red sandstone, in which most of the monuments of the region are constructed.

Their colour lends a particular variety to their appearance, especially at the sunrise and the sunset, when the Sun’s rays fall upon them at a slanted angle.

At dawn and dusk the sunlight plays with their pristine jungle background and their yellow-reddish sandstone and produces a beautiful spectacle, most ancient in nature and divine in experience.

The Story of its Restoration

There is a curious story about how this site came to be restored.

K K Muhammad was working as the Superintending Archaeologist for ASI. He saw these temples for the first time in 2005. Then it was just a huge mound but the ASI team had begun the work of restoring the site.

However, there was a problem. No one was ready to go there since the area was infested the dacoits. In fact, the very temples were used by dacoits to camp at night.

One day, Muhammad ran into the dreaded dacoit Nirbhay Singh Gurjar. Working diplomatically, he opened rounds of talks with the dacoit, convincing him that it was his great ancestors who had built these marvelous temples. The dacoit was pacified then and agreed to let the workers of ASI and tourists come there in peace.[3] The dacoits even protected the ASI team and the tourists who visited the temple.

The Great Dynasty of the Gurjara-Pratiharas

The Gurjara-Pratiharas, also known as the Pratihara Empire, ruled much of Northern India from the mid-7th to the 11th century.

Prithviraj Raso, the imperial legend of the dynasty tells us that the dynasty descended from the ‘Agnikula’ clan of the Rajputs. The royal dynasty derived their origin from a Yagna Kunda at Mount Abu.

One branch of the dynasty was founded in Rajasthan in 550 C.E. Its founder was Harichandra who was based in Bhinmal. His line later founded the state of Marwar who later built the famous temples of Osian.

The dynasty rose in prominence by gaining a reputation for repelling the Arab Islamic invasions. 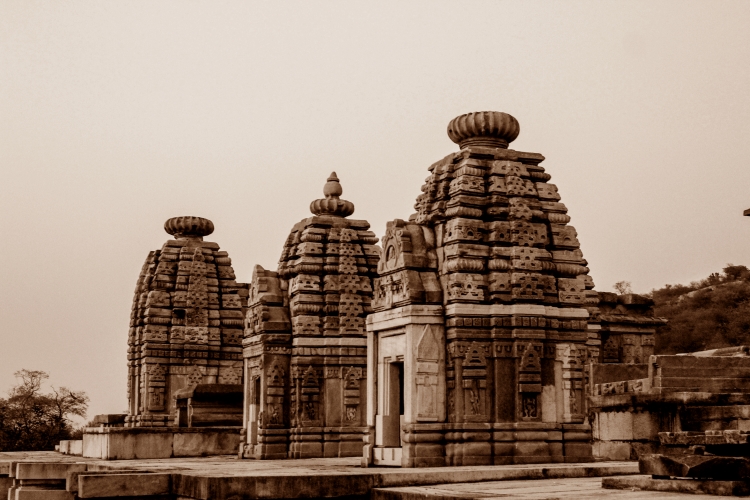 Nagabhata I (730-756) was the great ruler who founded the Gurjara dynasty, based in Avanti, or the modern-day Ujjain. He ruled Gwalior and its fort on which the modern Tomara fort is built. He also ruled the regions in and around Morena.

In the famous Battle of Rajasthan (738 C.E.), he led an alliance of many regional dynasties and routed the Arabs. Islam had already set roots in Sindh and was trying to get inside mainland India, but while it became instantly victorious in Anatolia, North Africa and southern Europe, India was a tough nut to crack mainly due to the resistance given by the Gurjara-Pratiharas.[4]

The Gurjara-Pratihara rulers were great patrons of art and commissioned thousands of Hindu temples over the vast realms that they ruled. They also rebuilt the temples that were destroyed in the barbarian attacks of the Islamic invaders in early medieval era.

Nagabhatta II (800-833) checked Muslim attacks in the west again. He rebuilt the great Somnath temple in Gujarat which had been destroyed by the Islamic invaders earlier. He also conquered Kanyakubja (Kannauj) and during his reign, it became the capital of the great dynasty. During the reign of Mahendrapala I (890-910), the realm of the dynasty had grown from the border of Sindh in the west to Assam in the east.

In the tenth century, due to several reasons, the dynasty broke up into the Paramaras of Malwa, the Chandellas of Bundelkhand, the Kalachuris of Mahakoshal, the Solankis of Rajasthan and the Kachhapaghatas of Gwalior, who ruled Morena and the Chambal region.

These dynasties commissioned the next wave of Hindu temples, bigger and more beautiful than their earlier counterparts. The Kachhapaghatas built great temples in the Chambal region, which will be the subject of the next article in this series.

The historian and scholar par excellence, R. C. Majumadar, clarifying the role of the Gurjara-Pratiharas in Indian history has observed:

“The Gurjara Pratihara Empire which continued in full glory for nearly a century, was the last great empire in Northern India before the Muslim conquest. This honour is accorded to the empire of Harsha by many historians of repute, but without any real justification, for the Pratihara Empire was probably larger, certainly not less in extent, rivalled the Gupta Empire and brought political unity and its attendant blessings upon a large part of Northern India. But its chief credit lies in its successful resistance to the foreign invasions from the west, from the days of Junaid. This was frankly recognised by the Arab writers themselves.”

The primary contribution of the Gurjara-Pratiharas was to hold the Islamic attackers at bay for more than three hundred years. They saved the Hindus from staggering misery, saved countless number of temples and built thousands of others.

Without the Gurjara-Pratiharas, the entire history of India might have been wholly different. This played a great role in ensuring that India remained Hindu.

Explore Ancient Temples and Modern Dacoits Part I, and II