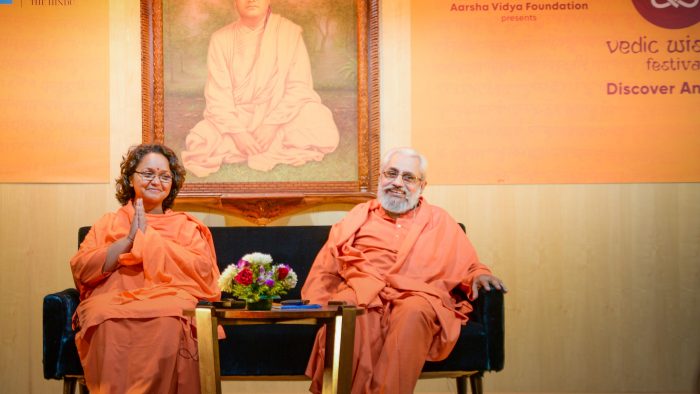 The second edition of the ‘Vedic Wisdom Festival’ is being organized on December 7th and 8th, 2019 at Rangasharada Auditorium, Bandra West, Mumbai. The two-day festival is aimed at facilitating participants to discover, learn, and celebrate the transformative power of Vedanta.

The event is being organized by Swami Brahmavidananada Saraswati and Swamini Brahmaprajnananda Saraswati. They both are traditional teachers of Advaita Vedanta and direct disciples of Pujya Swami Dayananda Saraswati ji.

In an email conversation, they shared their vision behind the festival and how it is relevant and useful to common people. Some excerpts from the interview follow.

Namaste Swamiji and Swaminiji. Please talk to us about the ‘Vedic Wisdom Festival’ that you are organizing in December 2019.

Swami Brahmavidananda: The Vedic Wisdom Festival is conceived of and presented by Aarsha Vidya Foundation, a registered trust in Mumbai to share ancient Vedanta teachings for contemporary living.

VWF is a festival where we have different masters or teachers explaining different facets of Veda and Vedanta. It is a unique opportunity for people to be exposed to the wisdom teachings of so many gurus and masters under one roof all over a period of just two days.

Swamini Brahmaprajnananda: Our society is going through an upheaval where a lot of Indian wisdom and practices are still seen through a Western lens. There is a rush to learn and practice without going to the roots or seeing the connection with the Vedas. We clearly see that there is a need for a truly Indian narrative to emerge which offers us the stability of being rooted to our tradition and having the wings to fly globally.

Due to our backgrounds, we are in a unique position to offer a well considered balanced perspective and curate talks that present the teachings of Hinduism authentically.

What is the inspiration behind organizing this event? How was it conceived?

Swami Brahmavidananda: One day the two of us were discussing about presenting an authentic view of Hinduism and its source. Hinduism or Sanatana dharma rooted in the Vedas, is so vast and multi-dimensional that many people are confused. Hence they have distanced themselves, especially the modern, educated city people. At the core of Hinduism is Vedanta, the wisdom of the Bhagavad Gita and the Upanishads and so we thought about presenting teachings through different teachers under one roof and the idea of the festival was born. Both of us have our Vedanta classes, courses and retreats but those are for people who have already made a commitment. We recognize that people need more opportunities to explore the teachings directly with a guru and also feel free to ask their questions, as is present in the tradition.

We recognise the need for teachers to network and create a synergy effect. Many of the speakers are traditional teachers doing very good work in teaching students who come to them. However, their voices are limited to their own students. We thought of broadening that approach and getting every teacher exposed to a larger audience.

Swamini Brahmaprajnananda: For almost 20 years until 2005, Swami Brahmavidananda ji used to regularly organize our guru, Pujya Swami Dayananda’s talks in Mumbai every year, which people would look forward to. Following his mahasamadhi we decided to take the tradition of Vedanta, as Swamiji’s direct disciples, for seekers every year. This is as a part of our commitment to the tradition and a tribute to Pujya Swamiji.

I believe this is the second edition of the event. How was the response to your first edition in 2018? What themes were focused on then?

Swami Brahmavidananda: The first festival in 2018 was very well received. Generally when we organize a seminar or a full day event event, about 100 participants register. For the festival last year, we had almost 250 participants. The ones who attended on the first day brought their friends and family the next day. A glimpse of their positive, effusive, heartfelt feedback is put up on our YouTube channel as well. It is their positive response that made us believe that the response this year will be bigger. Some of the participants chose to commit to our regular Bhagavad Gita classes and a lot of them started to follow the teachings on YouTube.

Swamini Brahmaprajnananda: The central theme was Vedanta and so the topics were ‘Discovering Ananda in contemporary living, Vedanta for growth and success, Bhakti in Vedanta, Vedanta in one’s emotional life, The problem is you; the solution is you, and how Yoga is a preparation for Vedanta. There were two interesting panel discussions. One panel discussion was with children and their teachers, where children attending the sessions organised by Chinmaya mission and Art of living spoke about how their lives were changing. The second panel discussion delved into Myths around Hinduism and took questions from the audience. The role of Astrology was very well received and so was the session on Modern Science and Advaita. Through all of the sessions we had moments with Pujya Swamiji – a series of video clips interspersed through the event.

The highlight of this event is the celebration of Gita Jayanti, this year. It is quite extraordinary that more than 2500 years later, we can still share and revel in the timeless teachings of the Gita. And so a lot of the Vedanta talks will present the wisdom of the Gita through the topics – Lessons from the Mahabharata, A thousand desires, A few priorities(Karma Yoga), How Meditation can change our life, Bhagavad Gita in daily life. From the Arsha Vidya tradition, besides the two of us there are four other teachers, both sannyasis and householders – Swami Shuddhabodhananda, Swami Brahmabhutananda, Acharya Uday and Acharya Falguni.
We always have a session to show areas of congruence and areas of difference between Vedanta and Science. Last year we had Dr Ramasubramaniam from IIT who spoke from the lens of Maths and Physics. This year we have Dr Uma Ladiwala who will speak about meditation and the neuro-scientist perspective. There will be a session on ‘How to survive and thrive as a parent’ drawing from the wisdom of our Shastra, by Dr Uma Shankar. There is a session on ‘The power of a Havan’ by Ghanapaathi Vignesh from Vedadhaara and a session on how astrology can help one’s life by Herga Ravindra Bhat from Udupi. We have an experiential session on healing sounds and breathwork by Sifu Christopher Fernanades who will give us a glimpse of how Taoist Yoga is related to Vedic Wisdom. Our last panel discussion is on ‘Hinduism matters’ where we will look at difficult questions and simple answers by the two of us.

Is the event open for the general public? Who are the target audience?

Swami Brahmavidananda : We have designed the festival for the general public primarily. In fact because we want the festival to have a wide reach, we are holding it in a big auditorium that is centrally located. The two day event has been subsidized by generous sponsorships and for the participant, registration fee is only Rs 500 (including lunch and tea on both days). We are grateful to Indic Academy for being one of our partners

The target audience are people from 20 – 80 years old, students and people keen to have an immersive learning of Vedanta, keen to see the connection between Hinduism and our scriptures and want to apply timeless principles in their different ages and stages of life.
Swamini Brahmaprajnananda – The highest in spirituality is the discovery of the Limitless and the highest in karma is Yajna and the highest value that modern people give is to Science. We have all three covered in the festival!

Even the ones who identify themselves as spiritual-not-religious will gain hugely.

Final question, how is Vedic wisdom in general and Vedanta in particular useful to people in their day-to-day living? How would they be benefited by immersing in this two day festival?

Swami Brahmaprajnananda: Yoga, Mindfulness, Ayurveda, Jyotish and so much more that is gaining popularity across the world and benefiting millions of people has its roots in Vedic Wisdom. At a very basic level, through imbibing and cultivating the right values and attitudes and meditative attitudes that Vedic wisdom offers, people become more competent and accepting in their personal and professional lives. Bhagavan in the Gita says ‘svalpam asya dharmasya traayate mahato bhayaat’- Even a little of this disposition of karma yoga will protect the person from great fears.

People start to live a more productive and purposeful life because their purpose is clear and so are their many priorities. Much needed balance comes into their life. People are able to clearly see where all sadhanas fit in and that they themselves are the sadhya, the goal. They become cheerful, gracious and move from a life of mere consumption to a life of meaningful contribution. Most importantly Vedanta starts where modern psychology and science end and people will be able to appreciate that. We can go on and on.

Swamini Brahmavidananda: About the benefits – Those who are seekers will get direction and become informed seekers or what we call jignyaasu. People who have no exposure to the Vedas will gain insights into Vedic wisdom and will be able to live in harmony with the insights. Those who have had exposure to Vedanta before will find their understanding richer. By this immersive learning, some people will discover a commitment to take up the study more seriously. They will move from a life of mere competency and success to a life of fulfillment.

Swamini Brahmaprajnananda: After patiently answering a host of questions from Swami Chinmayananda ji who was still in his earlier journalistic avatar, Swamiji Sivananda said to him,’ Young man, you ask many questions. When will your questions, turn into a quest?” And that proved to be one of his many turning points. We hope that the festival answers many questions and offers clear direction to those who have a quest!

For more about the VWF, visit https://www.vedicwisdomfestival.in/