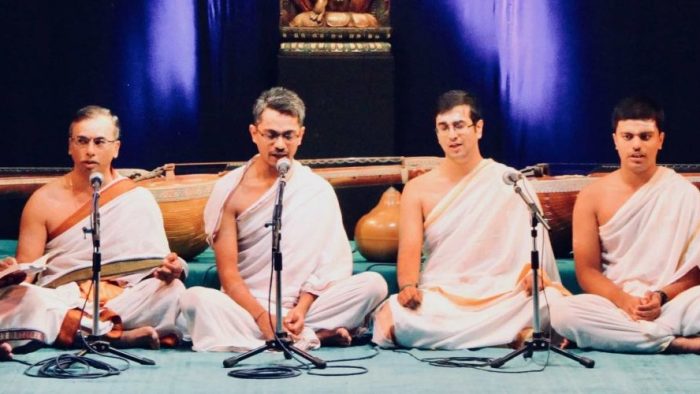 The first ever complete video documentation of the entire Rig Veda chanting of Pada Paatha, rendering of the constituent words of Rig Veda mantras in the unique traditional Kerala style in which chanting is accompanied by Hasta Mudra or hand signs, has been completed by a group of scholars from Kerala. Indic Academy extended a grant towards this project.

Knowledge of Pada Paatha is essential for correct understanding and interpretation of Rig Veda mantras. Pada Paatha is an important part of Vedic tradition both in study and rituals. It is the intermediate expertise level after Samhita Paatha for scholars pursuing advanced chantings such as Krama and Vikriti Paathas. It is the first step in the study and error-free rendering of the meter bound Samhitas which strictly follow Vedic grammatical rules. Pada Paatha with Hasta mudra forms part of many traditional Kerala Vedic rituals like Veda initiation, Vaaram, Threeni, Thrisandhya etc.

Hasta mudras have been used by Kerala Brahmins – Nambutiris – in the Vedic recitation. They are used to avoid ambiguity in reciting Samhitapaaṭha. It is believed that when a young child of 10 or 11 years learns the Vedas, he may not be aware of Sanskrit grammar and its usages. When he is taught the Vedas, accompanied by hastamudras, the Samhitapaaṭha and Pada Paaṭha will become much clearer and more intelligible. Ambiguity in accentuation is also classified with the help of hastamudras.

There is no documentary evidence with regard to the origin of the hastamudras. Dr Mannur Jatavedan Nambuthiri, an authority in the Vedas, and a part of this project, remarks about the origin in his article published in Bhaktapriya. “It is said that it was the sage Parasurama who lead the formation for the customs and rituals (non- rituals) of Kerala Nambutiris, while it was Sankaracarya who reformed them. Legend has it that it was the sage Vaikhanasa, who lead by sage Parasurama, formulated the Kerala style of chanting of Japasvara and Matrasvara in udatta and anudatta accents.”

“Among these three systems, Ṛig Veda recitation of Kerala has occupied a well-established methodology of hastamudras. In Ṛig Veda, hastamudras are used to represent sounds, accents and lengthening of syllables. Yajurveda chanting accepted the mudras of Ṛig Veda to a great extent, or Yajurvedins accepted only some features of hastamudras of Ṛig Veda to recite and to teach. Apart from these two systems of chanting, Sama Veda uses hand gestures or movements to represent accents and their matras. In the Sama Veda chanting the forearm is fully made use of. The Tamil Brahmins of Koduntarappilli village in Palakkad District in Kerala state have a distinct style of Jaiminiya Sama chanting, though basically rooted in Tamil culture.”
There have been various types of Vedavikṛtis prevalent in India that laid stress on rote learning and memory. There were eight vikṛtis such, jaṭa, mata, sikha, ratha, each having its importance in the Southern states of Tamil Nadu, Karnataka and Kerala. One scholar has pointed to the artistic and creative aspects of the hasthamudras which are also seen in the performing arts of Kerala. “Mudrabhinaya has great importance in Kerala art forms. Nowhere else in India can one see mudrabhinaya being given such a pride of place as in Kerala. For e.g. in Kutiyattam and Kathakali. There is no obvious connection between Vaidika mudras which represent sounds and accents, and abhinaya mudras which represent an idea as a whole. The tradition of hastamudras which has flourished in Kerala influenced the divergent areas like theatre art, iconography and gave shape to several systematic forms of performance in later years,” writes Parvathy K.P, Assistant Professor VTB College, in Palakkad.

The scholars who are part of the 50 hour video project, experts in Samhita, Pada, Krama and Vikuti paathas, include KM Vasudevan Namboodiri, Dr NM Ravindran Namboodiripad, Dr KM Jatavedan Namboodiri and PN Namboodiri. The project was undertaken with twin objectives: Preservation of this traditional knowledge system and documentation for future reference by scholars and students and also for creation of an effective teaching and memorization tool for Rig Veda Pada Paatha.

While printed texts of Pada Paatha are available from three or four sources, scholars Sri Vasudevan Namboodiri and PN Namboodiri in this interview say this is the first ever audio or video recording of the complete Rig Veda Pada Paatha and they speak particularly about the Kerala tradition.

What are the unique features of the Kerala Pada Paatha rendering?

The unique feature of Kerala tradition is the comprehensive use of Hasta mudra which is an integral part of Pada Paatha. Hasta mudra, hand sign is a complex technique using the palm and fingers of the right hand in various positions with following objectives:

It is interesting to note that Vedic scholars can communicate specific Veda mantras simply by hand signs, with no need for oral rendering.

According to Dr Mannur Jatavedan Nambuthiri, there are about 30 types of hastamudras in the Ṛig Veda. In Rig Veda tradition, some mudras are named based on the mantras of the syllables while others are pronunciation-related or named based on the place of articulation and some are named after the letter itself – such as – आकारमुद्रा, नकारमुद्रा |

What is your view of different translations of the Rig Veda available in academic circles today?

We have only glanced through some translations of Rig Veda by Max Muller, Griffith, etc. I am not in a position to make expert comments on these but give below some general observations:

i) Sanskrit, especially Vedic Sanskrit has many words which have no equivalents in English.

ii) Translations are likely to be faulty with superficial knowledge of the Vedas. One should be familiar or should experience the essence of Veda mantras to produce effective translations.

iii) Rig Veda mantras are more than 10,000 in number. Initial expertise of Samhita chanting itself will require more than three years study.

iv) Study of Vedangas is also required for a comprehensive understanding of Vedas.

v) Beyond this initial expertise of Samhita, one has to devote time and effort under the able guidance of Gurus to be able to attain the required ability and expertise for meaningful translation.

vi) Most of the available English translations, as far as we know, are based on Sayana’s commentary of Rig Veda, which is mainly based on ritualistic perspective and fails to convey the spiritual essence of the mantras.

vii) I have come across a recent commentary by late Dr Kuroor Damodaran Namboodiripad which appears to be based on his own spiritual insight of Veda mantras. This is still in the manuscript stage only, not yet published.

viii) In his book, “The Secret of Vedas”, Sri Aurobindo had explained how to interpret Rigveda spiritually. This book also has translation of many Rigveda Suktas along these lines.

Proper understanding of many of the Veda mantras is difficult as explained by Lord Krishna to Uddhava (Bhagavatam Canto 11, Chapter 21).

Meaning – The transcendental sound [the sabda-brahman] manifesting itself in the prana, the senses and the mind [of the self-realized, enlightened person] is something most difficult to understand, it is unlimited and is as unfathomably deep as the ocean. (Vedabase)

Meaning – What they [karma-kanda] enjoin [to be done], what they [upasana-kanda] indicate [as being the object of devotion], what aspects they describe or what alternatives they [jnana-kanda] thus literarily offer [as philosophy], the heart of this matter is in this world not known by anyone else but Me [compare 11.20, B.G. 4: 5, 7: 26, 10: 41]. (Vedabase)

Meaning – I am the object of worship, the concern of the enjoined action and the alternative that is offered and explained away. The transcendental sound vibration of the Vedas establishes ‘Me’ as being their meaning and elaborately describes the material duality as simply being the illusory one has to emasculate to ultimately become happy (Vedabase).

How can we strive to re-establish a relationship with the Rig Veda, our most ancient Vedic legacy?

Our comments are based on our observations of the situation in Kerala. Vedadhyayanam and Vedic rituals are two important components of Vedic legacy. Vedadhyanam denotes the preliminary expertise of Samhita chanting and the advanced expertise of Krama and Vikrutipaathas. Advanced studies will be imparted to only eligible students who have completed Samhita study. Vedic rituals were a common feature in temples and many homes in olden times which played an important role in the preservation of traditional Vedic knowledge system.
Vedadhyanam at basic Samhita level was prevalent without exception among the Brahmin/Vedic families of Kerala in olden times with eligible students pursuing advanced studies mostly in two Mathas, located in Thrissur and Tirunavaya. Vedic scholars used to come and stay with the family of the student for teaching with students from nearby families also joining. This basic level continues for 3-4 years till most of the students gain expertise of complete Samhhita chanting.

Over the last few decades, residential teaching of Samhita, the basic component of Vedic tradition has totally disappeared. Currently only one Matha (Thrissur Bramasvam Matha) is active in teaching of Rig Veda. There are few scholars teaching interested students, at the scholar’s residence. This is mostly on temporary basis during school vacation etc. and does not cover basic expertise level of Samhita paatha.

We do not see any easy option for re-establishing this tradition of Rigveda in the near future. This will require sustained awareness campaign, Institutional support for setting up new Mathas and for running them as also expansion of the activities of existing ones, Incentives for Vedic scholars to undertake teaching and training to young students and Students should be provided scholarship, boarding, lodging etc and suitable employment options made available after studies.

How significant are the differences in Padha paatha rendering over the years. Do they fundamentally change the meaning?

While the renderings may vary somewhat in different parts of the country, it remains unchanged over time in each tradition. This is mostly due to the oral tradition followed which ensured strict adherence to the style of rendering which is passed from generation to generation. Integration of comprehensive Hasta mudra with Pada Paatha in Kerala tradition is an additional security to maintain the original style of Pada Paatha rendering.