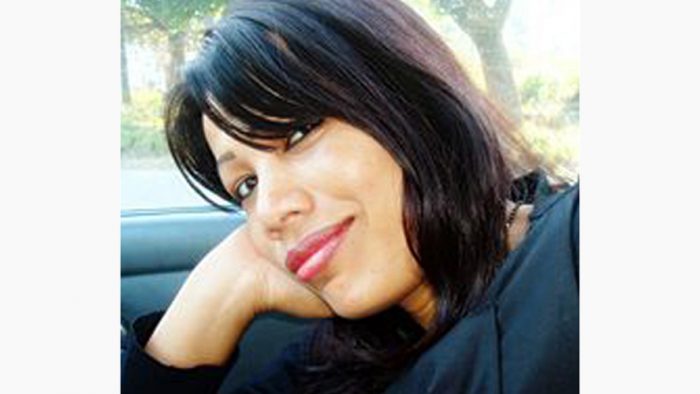 Author Manoshi Sinha (Rawal) calls herself a writer by passion and an editor by profession. The writer who has published seven books was educated at Don Bosco School, Doom Dooma and graduated from Women’s College Tinsukia, Assam. She is also a post-graduate in English from the University of Pune.

Her first novel – Made for Each Other – was published in 2000 and her latest one is the Blue Vanquisher-the second of the Krishna Trilogy 2 that followed ‘The Eighth Avatar’ . In this interview, Manoshi Sinha (Rawal) speaks on her latest novel Blue Vanquisher which narrates the life of Krishn from 14th to his 85th year and she says dispels several myths surround the ‘lord’. The author lives in Ghaziabad with her family.

You can also click here to buy her books. She also conducted a Facebook live recently which you could check and her page here.

1. How has the online space been a game changer in your journey as a Blogger, travelogue, wordsmith, and author?

I have been writing since I was 10. It started off as a passion weaving poetry, short stories, and novels whenever I was able to sneak out time for myself. What I wrote before 2000 took the form of unpublished manuscript and the handwritten documents are well-preserved. Every time my eyes hit on the papers, there is a dash of nostalgia that wafts through my senses. The papers carry the perfume of my hometown, childhood and college days that makes the memory vivid. Like a robot, I am transported back to those golden moments of my life.

My first novel?Made for Each Other, a romantic edition, was published by the Guwahati-based Genesis Printers in 2000. It was how the ?writer? tag took shape in my persona. I started my career as a teacher and lecturer in my home town but when I moved to Delhi, the gear was shifted to professional content writing and editing. I wasn?t yet introduced to the online world in those days. ?It was in the print sector that I spent the first five years of my career. I am still connected to the print media by working for a business magazine as a freelance Editor. Meanwhile, my second book?The Stigma of Womanhood?was published by the Women?s Press Delhi in 2005.

My online stint in writing started some 9 to 10 years back. But, I was mostly writing for various companies. ?It was only a year back that I started blogging on different topics and writing travelogues online. I have been an avid traveler, but the idea to immortalize the travel experiences in words cropped up a year ago. That?s how I became a travelogue wordsmith. I and my husband have covered the length and breadth of India by Mahindra Thar, where both of us were driving in turns. Most of our places of interest are the historical and archaeological sites that include places of pilgrimage and nature destinations. Even a lifetime of travel isn?t enough to explore with detail the whole of India! The online space has, indeed become a game changer in my journey as a traveler.

As an author, I get the opportunity to express my thoughts and disseminate information about our rich cultural splendor, archaeological heritage, and much more on the online world. I also write stories about people who have positively impacted society in different fields and who are an inspiration for all.

?2.?You have published seven books and your latest offering is?Blue Vanquisher?which narrates the tale of Krishn who is one fascinating and intriguing character in Hindu mythology. Have you painted him as a character?with contemporary human form or unraveled the mystery surrounding his life?

These seven books include four novels and three collaborative academic/competitive exams books. One of my collaborative works,?DGP English Improvement Course, is a bestseller which is running in its 13th?edition.

My second book on Krishn,?Blue Vanquisher?depicts Krishn?s life from his 14th?to his 85th?year.? He is a fascinating and intriguing character in Hindu mythology. In fact, Krishn is not mythological, but a historical figure. The unearthing of Dwarka?s ruins under water corroborates this fact. He was a contemporary human being during his times, but it?s another story that he was a divinely blessed soul.

In the book, I have painted him as a character, unraveling and refuting numerous myths associated with him. For example, the myth that he had many wives including the 16,000 women he liberated from Narakasur?s captivity is a myth. He was a one-wife man, devoted husband, and?Yugpurush, who decimated evil around him. Krishn was a master strategist.

3. It all started with?The Eighth Avatar?that traces the life of Krishn where you broke several myths right from his relation with?gopisand his ?consort? Radha. How much research has gone into the making of the book described as ?myth-breaker? that broke several classic or conservative beliefs?

The Eighth Avatar?depicts Krishn?s life from his 1st?to his 14th?year.? The book refutes several myths that surround the life of Krishn. Radha was not his ?consort? or beloved. She was his?maami?, married to Aiyyan, who is Yashoda?s brother. She was 10 years older to Krishn. The?gopis?and?Radha?were only divinely connected to him as his devotees, especially when he played the?bansuri.?The notes and intonations of his?bansuri?not only transported Radha and?gopis?irrespective of all ages but also the cowherds, animals, and even Nature to a divine terrain. They became one with the divine. It was this oneness with the divine that several writers of the post?Mahabharat?period misinterpreted, adding spice to the story. Radha finds no mention in numerous scriptures!

I have done thorough research by reading books, visiting places associated with Krishn and listening to scholarly people. My mother-in-law, who is a double postgraduate in Sanskrit and Hindi, is well versed in the?Veds,?Mahabharat, and all of our Hindu scriptures in Sanskrit. She is a treasure-house of ancient knowledge. Listening to her about Krishn has always been a sheer delight.

One book that I researched and is worth mentioning here is Bankim Chandra Chatterjee?s (composer of?Vande Mataram)?Krishna Charitra?which is considered to be a biography on Krishn.? Before he wrote this book, he conducted research on the?Mahabharat?and drew on several sources spanning for over 30 years! This book also mentions Krishn as a one-wife man, married only to Rukmini.

4. Your books? genres are varied, right from romance, mythology but also highlighting the plight of women in a state like Assam where neglect is often rampant. How does real life issues influence your writing and was there something specific that led a deep impact on you that was translated into words?

Yes, my books cover myriad genres.? Indeed, real life issues influence my writing. Life is not as easy as it seems to be. Moreover, it depends on how one perceives life. On an optimistic angle, every moment and everything around us seems to be beautiful. One may find happiness even in a quarrel, a financial crunch or in distress, etc. Looking at life from a pessimism angle may look difficult. ?I have covered both these aspects in my writings that revolve on romance and social genres.

I wrote?Stigma of Womanhood?at a time when the effects of terrorism in Assam were still visible on few, including women folk. The plights faced by women are highlighted in the book where I included, a few social norms prevalent in a community in Assam.? For example, when a husband dies, the widow?s hair is shaved off just to become jocular showpiece of widowhood. Though this ritual is dying away with time, it is still being observed.

5. You also belong to the?Bishnupriya Manipuri?Can you tell us something unique about your community and the plight faced where you would like to see change happening? To what extent, the issues experienced in your community have found a voice and character in your novels?

I belong to the Bishnupriya Manipuri community. We have strong cultural roots and simplicity characterizing our existence. We are Krishn?bhakts. We belong to the lineage of Babrubahan, the son of Arjun and Chitrangada (princess of Manipur). The term ?Bishnupriya? denotes devotees of ?Vishnu?, another?avtar?of Krishn.

There are one or two issues plaguing the Bishnupriya Manipuri community which are hardly brought to the fore. And every community face issues. Not allowing inter caste marriages is one such issue, which also permeates many a community. Though perceptions have changed with many families moving ahead with time, there are many who still stick to the norms set by the ancestors and which is followed generation after generation. One is widowhood which has been discussed above. I wrote?The Stigma of Womanhood?12 years ago and during all these times, there have been a lot of changes to make things better.

6. Your life is no short than an inspiration: You were nominated for the Rising Stars awards on account of your achievements. As a young author and successful Indian, how do you see the progress made by our country, issues such as ?tolerance?, conditions of women and the people in your state, Assam?

When we speak of heritage and ancient civilizations, of knowledge and wisdom, there is no country that matches with India. On the economic front, India was a rich country much before the Mughals and British drained our resources. The British even went to the extent of westernized our education system, administrative affairs, cultural roots that gave shape to this silent conspiracy to a great extent.

If we use more of?Swadeshi?goods in our daily existence, profits that go into foreign pockets will find a place in India. The youth brimming with ideas and an entrepreneurial bent of mind should come forward and contribute to India?s growth story. It is only then that ?Make in India? will become a success.

The government is offering loans at low interest rates to promote entrepreneurs. It is but an irony that most software engineers and scientists work for foreign firms. Imagine how India would benefit if they work on the Indian soil to better the country! We will then progress by leaps and bounds. The youth should also come up with ideas to help the government and citizens to create sustainable solutions to curb recurring disasters like floods, drought, etc.

On intolerance, I feel that it didn?t exist earlier but it gained momentum during the last two years and this perception is the brain child of a group having vested interests. ?But, I feel that citizens that should be actively involved in the cultural, spiritual, and economic renaissance of India.

Women were empowered during ancient, medieval, and pre-modern times. They are empowered today. Only in few communities, they are neglected. But perceptions are changing. With the?beti bachao, beti parhao?campaign started by the government, we are on the right track to combat female infanticide/foeticide. Every Indian woman should be trained in martial arts for self-defence.

7. You are also behind the e-zine, My India, My Glory. How did you decide to launch something as unique and diverse about our country?s rich history? What was the inspiration behind?

With digitization taking the world by storm, information today is available at our finger tips or a click of the mouse. Today?s teenagers and youth will be the architects of our nation tomorrow. I wanted to spread information about our rich past, glorious heritage and cultural roots dating back to thousands of years. And then, History has ignored the sacrifices made by many freedom fighters, kings, and warriors; text books rather glorified the invaders.

Besides, there are people who have set an example for others to follow by positively impacting the society in different spheres. Through the e-zine,?www.myindiamyglory.com, my objective is to make this information easily accessible and readily available. ?I wish to speak volume about the exploits of our ancestors dating back to hundreds and thousands of years.