Dr. Vineet Aggarwal, author of Bharat on what inspires him to write 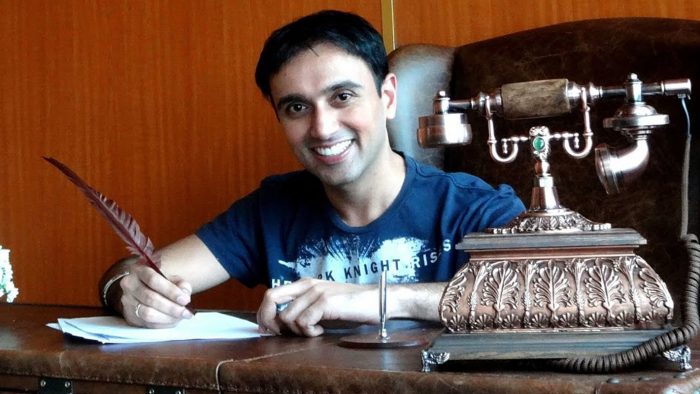 Dr Vineet Aggarwal is a doctor by qualification, manager by profession and artist by temperament. Born in a family of doctors, he successfully completed an initial stint with the family occupation before deciding to venture into pharmaceutical management. He purses writing as a passion and is an avid travel photographer as well. His literary repertoire extends from politics to poetry and travel to terrorism but his favourite genre remains the amalgamation of science and mythology.

He has published three books, the latest book being on Maharaja Bharat. In this interview, Dr. Vineet Aggarwal speaks on what inspires him to write.

You can also click ‘here’ to buy his books. He also conducted a ‘Facebook’ live recently which you could check and his page here.

1. When did you first realize that you wanted to be a writer/ a storyteller?
My fascination with the ancient stories of India began quite early in my childhood, with my grandmother regaling me with the wonderful narratives from our Puranik corpus. My grandfather, who retired as the head-master of a High-school, was a well-known author with books on History and Geography to his credit. Their unique combination of tradition tempered with scientific fact, fostered in me a fascination for the past and set me on a journey to discover the common ground between the two.

2. What inspires you to write?
My inspiration comes from our scriptures and the numerous secrets they hide within them. Today we watch the “Game of Thrones” or Greek mythology based movies with rapt attention but are completely oblivious of the equally dramatic stories told by our ancients. I write to make modern readers aware of the literary treasures from their own past.

3. What kind of research goes into your book?
When you write a book on characters that are revered even today by a billion people, you have to ensure that your research is top notch! While my first book Vishwamitra was based more on research of the scriptures, for the second one on Parshu-Raam, I actually visited the places associated with him all over the country. My hunt for the Avatar’s birthplace even led me to a small nondescript hamlet in Madhya Pradesh called Janapav and that gave me the setting for my book. Since both these characters are sort of “side-characters” in the epics, finding stories related to them and other characters related to them, and piecing all of them together in a coherent fashion is an uphill task!

4. What are you working on at the moment?
Well, I have been working on my third book for the past year which is a continuation of the series and is based on Maharaj Bharat who is Vishwamitra’s grandson and Parshu-Raam’s cousin. He is the man after whom India was called Bhaarat and it was his descendants who fought the epic battle of Mahabharat! The book is done should be out in the market by Diwali.

5. How did you come up with the idea for your current story?
When I finished writing Vishwamitra I realized that his story was just one half of the complete whole. He had been born because of a boon a part of which had also resulted in the birth of his nephew Parshu-Raam. It was later that the idea of continuing the story of their glorious lineage through Maharaj Bharat came to me. I was also keen on doing it since there is no other book that talks about this man who gave his name to our nation!

6. Please share three interesting facts about the characters in your book.
Oh there are loads of them but I will restrict myself to one each for the three protagonists:
– Vishwamitra was the man who discovered the Gayatri Mantra that millions of Hindus chant even today!
– Parshu-Raam had to behead his own mother at one point of time!
– Bharat was known as Sarva-daman (subduer of all) when he was a kid since he could overpower wild animals and used to play with lion cubs as a child!

7. If you could pick any famous author to review your book who would you pick and why?
Undoubtedly, it would be Amish Tripathi. He is one of the reasons the so called -mytho-fiction -genre has become so popular.

8. Have you read any books that have inspired you to improve or change yourself in any way?
There are so many! I absolutely love the work of Isaac Asimov, H. G. Wells, and Arthur C. Clarke and their absolute brilliance in creating stunning new worlds makes me expand my own vision while writing. On a personal level, I feel inspired by the teachings of Gautam Buddha and try to follow the – middle path – he recommends.

9. Name three things that you believe are important to character development?
First and the most important for me, since I write on characters from our scriptures, is ample research on the protagonist and various stories associated with him. When you have researched enough a picture automatically begins to emerge and you begin understanding his personality.
Second, a good understanding of his social environment as it existed in the time period that he belonged to so that you can understand his moral dilemmas or personal code of conduct.
And third, a grasp on his interpersonal relationships since they turn him from a haloed figure to a real person who suffers heartbreaks or gets angry or cries when he holds his kid for the first time just like any one of us.

10. What is the best piece of advice you would give to someone that wants to get into writing?
There is one thing that I tell everybody who wishes to pursue writing – it is a time consuming process so you need to be really patient! From the beginning of your research to the final printing of the book it can easily take few months to years and you have to persevere without losing hope.
Nothing beats the feeling of holding your printed book in your hand so hang in there and keep writing!