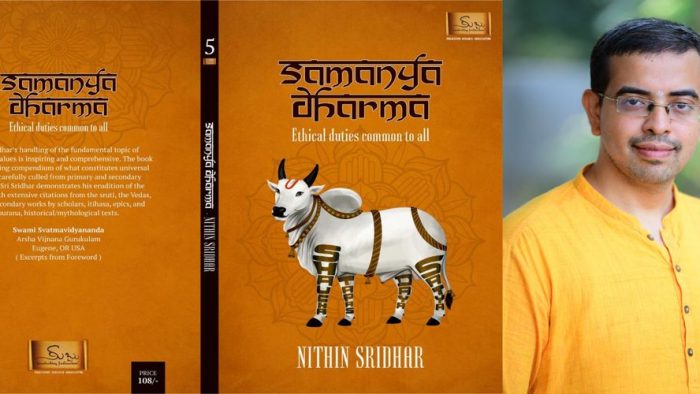 Nithin Sridhar, the author of the new release ‘Samanya Dharma’ and Editor of IndiaFacts, has been a student of the Dharmashastras for decades. As the Editor of IndiaFacts, he comes across both the practising Hindu and the political Hindu. He says that if he were to be asked the difference between a practising Hindu and a political Hindu, he would answer ‘that it is the practice of Dharma’. His book is a good primer to distinguish between the two.

Hinduism for him is nuanced. Sadly, he says, “many of the discussions around the practice of Dharma today tend to invariably end in a debate about merits or demerits of caste-system! Combine this, with the fact that there is a modern trend that wants to uphold Hinduism as ‘everything goes’, as if there is no concept of ethics or ethical life in Hindu view of life.” His study of Hindu Shastras shows that “Ethics have been given a central place by calling it Dharma, a duty, a responsibility. More specifically, ethical principles are considered as ‘Samanya Dharma’- duties that are common to all people, irrespective of community, language, gender, or position.”

His book Samanya Dharma enunciates ‘both the theoretical aspects of ethical principles as well as the nuances and contextualization involved in its practice’. He gives the example of Ahimsa, which is given great importance in Sanathana Dharma. “However, many tend to interpret it as Pacifism. But, such an interpretation goes against the spirit and understanding of the Shastras.” The book brings clarity to many such concepts. 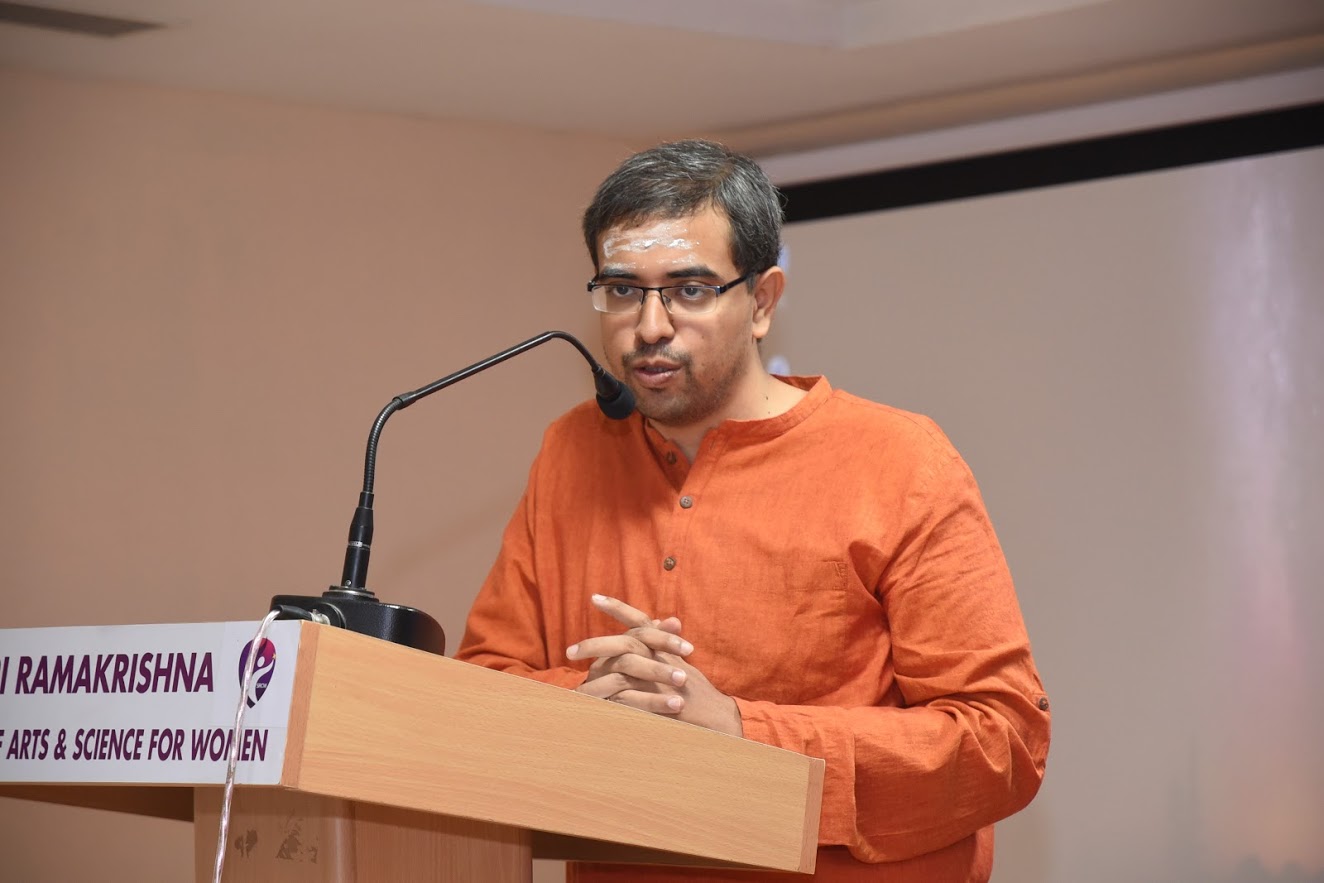 Asked about the story of Punyakoti, on which India’s first full-length Sanskrit film is being released shortly, and is partly funded by Indic Academy, Nithin says while the central theme of the story “is to uphold truth and one’s promise as great ethical values, what the story does not highlight is the fact that self-defence, saving oneself is also Dharma. So, even if the Cow had lied to the tiger to save itself or for the sake of its child, even that would have been Dharma! As far as keeping one’s promise is concerned, we must also realize how obsessive adherence to keeping the vow by Bhishma was the actual cause for the fall of the Kuru lineage and the Great War. Therefore, while Punyakoti is an amazing story that has moved generations of us who have heard this story in our childhood and it upholds some important principles of Dharma, no account must be taken in isolation or taken as absolute truths.”

Here are some questions from the interview with Nithin Sridhar on his new book Samanya Dharma:

In your opinion in terms of the Purusharthas, is Dharma a means, an end or a value system?

Dharma is all the three. As a means, Dharma leads one to acquire Artha and Kama in such a way that one moves closer and closer to Moksha and eventually attain Moksha as well. It is Dharma that facilitates the transformation of a person from being full of desire to being full of dispassion, which is the most important quality that makes one eligible for Moksha.

From another perspective, Dharma can be understood as the end as well. Our Shastras speak of Dharma being both Pravritti and Nivritti. Nivritti Dharma refers to both the path and the goal that it leads to Moksha. For this reason, Dharma is also called as Parama, the highest!

Dharma underpins all of Indian philosophy, the Veda and prominently in the Ramayana and Mahabharata. You speak about the categories of Dharma. What are your sources?

My book draws up the principles of Samanya Dharma from the entire Hindu textual tradition. Of course, this does not mean I have quoted every single text available to us. But, what I have done is, I have quoted representative texts from the Veda, Smriti, Itihasa, and Purana traditions. By categories of Dharma, if you mean the categorization into Samanya and Vishesha, you see such a division across the texts, most notably in Smritis like Manusmriti, which specifically designates a set of ethical principles as ‘Sadharana Dharma’. Sadharana is a synonym of Samanya, widely used in many texts. 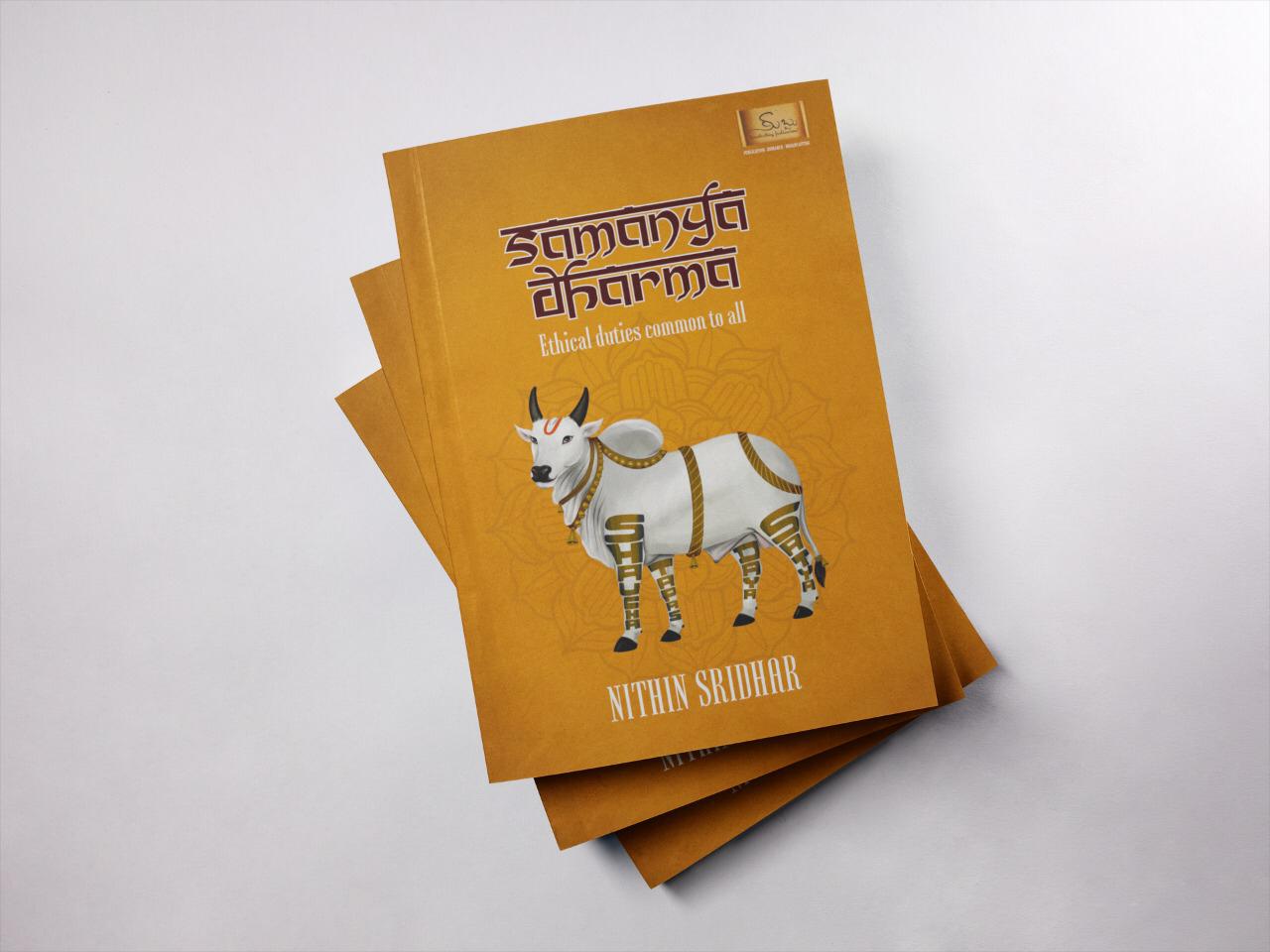 What can you say about the changing nature of Dharma and about Dharma in relation to another? Your book addresses the Samanya Dharmas. Do you make any distinctions?

As far as the changing nature of Dharma is concerned, I must highlight here that Dharma is constant and changing at the same time. It is like a river which continuously flows but constantly remains as water without undergoing any change in its innate character. It is not for no reason that Dharma is called Sanatana.

What is the definition of Dharma? That it upholds everything, all life, entire universe. And anything that disrupts our life, causes an imbalance in nature, that causes chaos is Adharma. Therefore, the essential nature of Dharma and its fundamental principles that uphold the individual and the universe, and leads one to overall well-being will always remain constant. The change happens only in the practical application of those principles, which are subject to Desha, Kala, and Patra. While these eternal unchanging principles take the form of Ethics in the human context and constitute ‘Samanya Dharma’, the changing application of Dharma –the permutation and combinations of choices that one must indulge in day-to-day life regarding multiple duties as a father, as a son, as husband, as citizen, etc.,- they constitute ‘Vishesha Dharma’ or Special Duties. One of the important aspects of Vishesha Dharma is ‘Varna-Ashrama Dharma’.

Why has spirituality been the most common take away from our texts when Indians have actually treated Artha, Kama and Dharma as a continuum?

That is a complex question and very difficult to answer. In the Classical period, India did have a healthy understanding of all the Purusharthas. It is my surmise that invasions from outside, especially the Islamic and then British (Christian) created such damage to our society and psyche that we are still living a colonized life despite physical independence in 1947! The Islamic invasion destroyed our social and religious life and was a threat to the continuation of our way of life. Bhakti movements that arose during medieval times served as the final anchor to which a common Hindu could himself/herself to. The arrival of the British saw the infusion of Victorian sexual mores into our society and the larger colonization of the Indian mind. When the Hindu movement of response arose in the form of Swami Vivekananda and others, they concentrated on saving the very core of Hindu civilization: the Moksha Purushartha. However, their side-lining of other Purusharthas, especially the Dharmashastra tradition, with many of them working to seriously undermine Dharmashastras in the name of reform meant that Dharma Purushartha is kept out of any social, political, or religious discourse in post-Independent India. The infusion of Christian and Victorian sexual mores meant Indians lost complete touch of Kama Purushartha as well! I believe these are among some of the major causes for the disconnect between the Purusharthas that we see today.

Today, we must first understand the value of Purushartha framework of life. Then, we must root ourselves and analyse our own lives using this framework. Each of us must self-introspect and align our lives to all the Purusharthas in a balanced manner. A good beginning can be made by trying to inculcate in our lives –in thoughts, words, and actions – the values of Samanya Dharma.

Which is the verse that encapsulates Dharma to you?

Dharma is the support of the whole cosmos. All people draw near a person who is fully devoted to Dharma. Through Dharma one removes all sins. Everything is supported by Dharma. Hence, Dharma is considered the Highest.

This, I believe captures the essence of Dharma.

Nithin Sridhar’s book may be purchased on Amazon.