Weekend with Wisdom: Yoga of the Bhagavad Gita 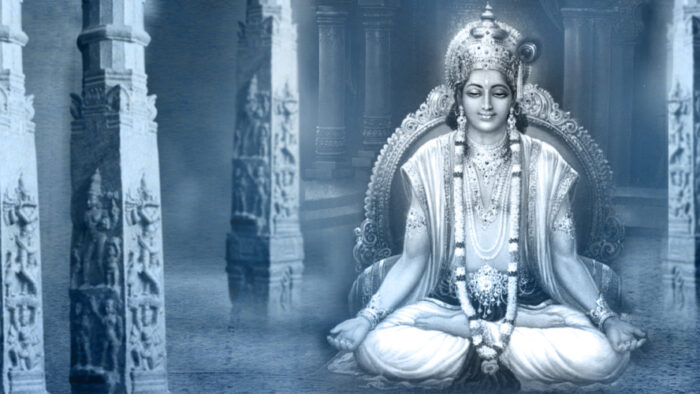 Indica Yoga kicks off Gita Jayanti celebrations with a three day Weekend with Wisdom webinar series on Yoga of the Bhagavad Gita. Each day is dedicated to a different form of yoga- day one for Jnana-yoga, day two for Karma-yoga and day three for Bhakti-yoga. The webinars will be presented by Swami Chidananda ji, Head, FOWAI forum and a leading Vedanta teacher and speaker on human values for more than three decades.

Join now for an in-depth exploration of Yoga in the Bhagavad Gita.

Swami Chidananda has been a Vedanta teacher and speaker on human values for more than three decades. After he served for 5 years as the resident Vedanta teacher in San Jose, California, in the mid-1990s, his work has been mostly in India and the USA. Since 2006, he heads FOWAI FORUM, a non-profit that disseminates philosophical and spiritual knowledge with special coverage of Indian ethos.

Numerous talks by him are on YouTube at the FOWAI channel. The author of seven books, he is especially known for his presentations on Bhagavad Geeta and the Upanishads. Hailing from the Udupi district in Karnataka, he has been living in Solan, Himachal Pradesh, since 2013.

He had begun with a career in electronics engineering, with a BE from Mysore University and an MTech from IIT Madras. Then he served Chinmaya Mission, the organization of Swami Chinmayanandaji, for 18 years and the Foundation of Jiddu Krishnamurti for 10 years. 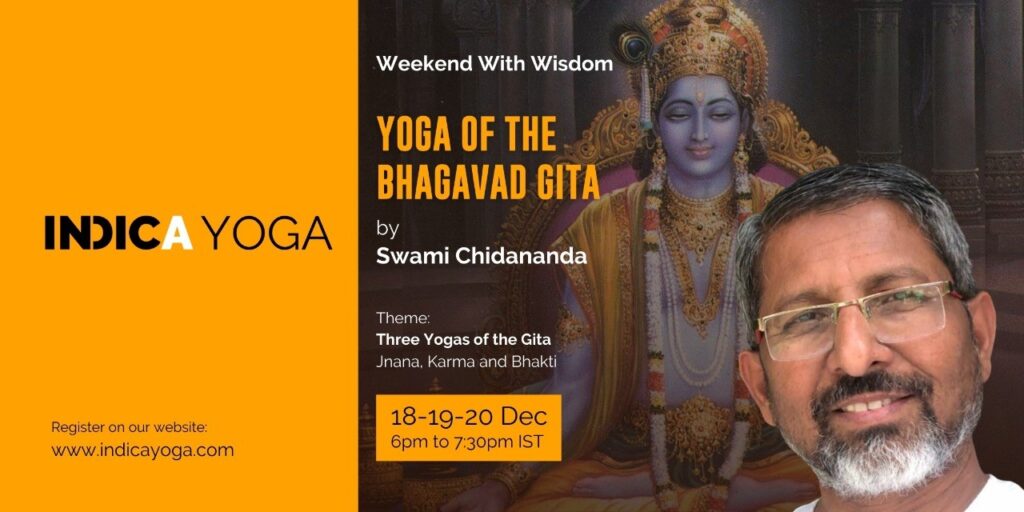 A Brief Synopsis of the Webinar Series:

Geetā is undeniably a beautiful garden where many flowers are in bloom. We have, in abundant measure, the fragrance of the well-known spiritual disciplines of karma (action without self-interest), bhakti (love towards the Supreme Power), yoga (control of inner energies) and jnāna (liberating wisdom). This series examines karma, bhakti and jnāna.

Jnana-yoga: This “Way of the Head,” is not dry, bookish scholarship but the wisdom marked by fine intelligence, which separates the truth from all falsehood. It is about knowing the spiritual nature of ours as distinct from the physical body and even from the subtle mind. It is the discipline that leads to Self-realization where we discover our true being as Existence-Awareness-Bliss (sat-chit-ānanda). The Geetā provides plenty of instructions and pointers towards this inner awakening.

Karma-yoga: Self-interest is like a thorn in the flesh, hurting us all the time. Spiritual ignorance makes us believe that we are smart if we can advance our own personal wealth, power, fame etc. The truth however is that our joy will know no bounds when we learn the art of being engaged in meaningful action without making an issue of “What’s there in it for me?” This noble way of emphasizing “giving” and de-emphasizing “receiving” is karma-yoga.

Bhakti-yoga: This “Way of the Heart” finds a prominent place among all the teachings of Geetā. “Reach me through single-pointed devotion, O Arjuna” says Shri Krishna. What we offer can be a leaf, a flower, a fruit or a spoonful of water but the love with which we do it is important. Surrender to the Lord, who resides in everybody’s heart, is declared the sure means to liberation.