Yatras: The Sangam of Scholars & Storytellers 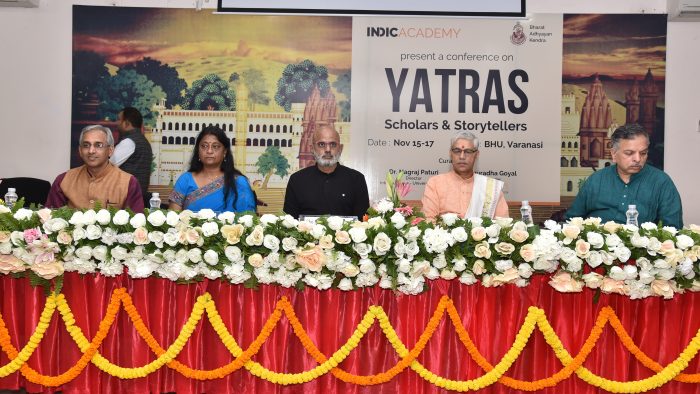 Indic Academy and Bharat Adhyayayan Kendra, BHU came together to organize a first of its kind conference on 15th -17th Dec’2019 in the historical campus of the prestigious Banaras Hindu University. The conference aimed to bring limelight on the ancient Indic tradition of Teerthayatra, i.e. pilgrimage from the scholarly lens while steering towards how the ancient traditions can be well adapted with changing times to promote spiritual tourism in India. The Three-Day event drew a highly successful participation with active discussions on different perspectives of pilgrimage from historical, social, economic, spiritual, and tourism promotion angle. 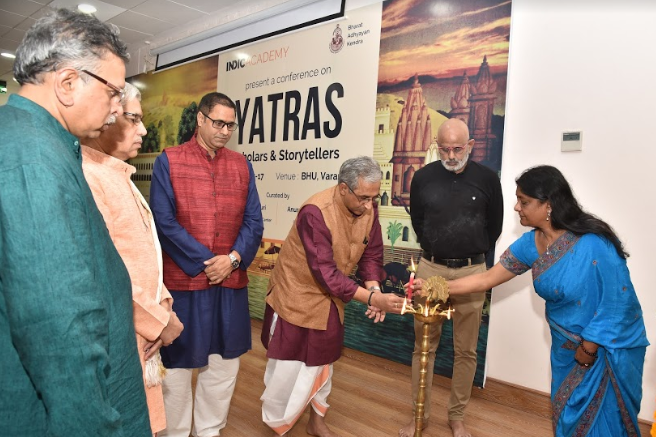 (Pic: Inauguration of the Conference)

Mr Hari Kiran, Founder, Indic Academy set the agenda highlighting the need of Indic scholars & storytellers to immerse themselves in Indic spiritual culture, to find out what in our timeless wisdom is of value to customers today, and convert it into products like books, services like Courses/Workshops, and experience like “Weekend with Wisdom”. Ms Anuradha Goyal the founder of IndiTales – an online platform with travel blogs of Indian heritage, emphasized the need of osmosis between storytellers and Indic scholars whose massive work very much remains within a microscopic community.

Dr Vijayshankar Shukla from Indira Gandhi Rashtriya Kala Kendra, who has done extensive travel across India shared the insights on how historically Teerthayatra(Pilgrimage) along with Utsava (festival)& SthalaMahatmya (Local legends) evolved through fusion of Vaidik and Shakta traditions. Dr Nagaraja Patauri, Director of Inter-Gurukula University, who had been curating the papers for the conference stressed on the need to explore Dootakavya literature and ancient travelogues to explore ancient Indian pilgrimage much better. Dr Sadashiva Kumar Dwivedi from Bharat Adhyayan Kendra welcomed the audience to the holy city of Kashi with sharing the perspectives on different Mandala based principles which have led to multiple pilgrim circuits within the epic city.

Multiple sessions were designed to cover various aspects of pilgrimages, and were titled as Jal Yatras, Yatras Connecting Bharat, Braj Yatra, Yatras of the West Coast, Yatras of the East Coast, Yatras in Maharashtra, Yatra and Wellness, Designing New Age Experiences with Yatra, Sthalapuranas, etc. with both scholars and story-tellers elaborating on the nuances of pilgrimage. Different cultural programs of classical music and dance were also organised after the academic sessions. 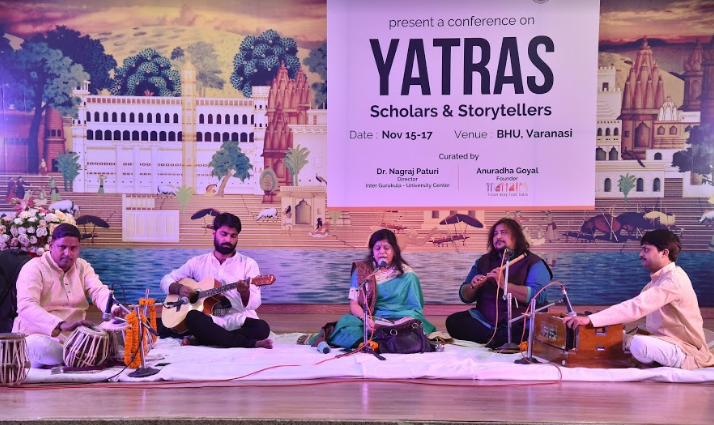 (Pic: Cultural Program during the Conference)

Madhavi Narsalay and Mrunalini Newalkar talked about River Godavari’s pilgrim sites which had been detailed in puranic scriptures and had been subjected to multiple changes during medieval era. They elaborated on how medieval composers like Dasganu Maharaj has contributed immensely by revising the information about these pilgrim sites as per changing times, and identifying modern geography of the same. Vithal C Nadkarni, a veteran columnist of Times of India while talking about River Narmanda, explained how pilgrimage can be an empty exercise if devoid of emotions. He highlighted how art, philosophy and geography were used by stalwarts like Adiguru to keep India united. Nikita Sarkar talked about her experiences with Neer Katha, an engaging musico-social exercise making its participants aware about social situations. 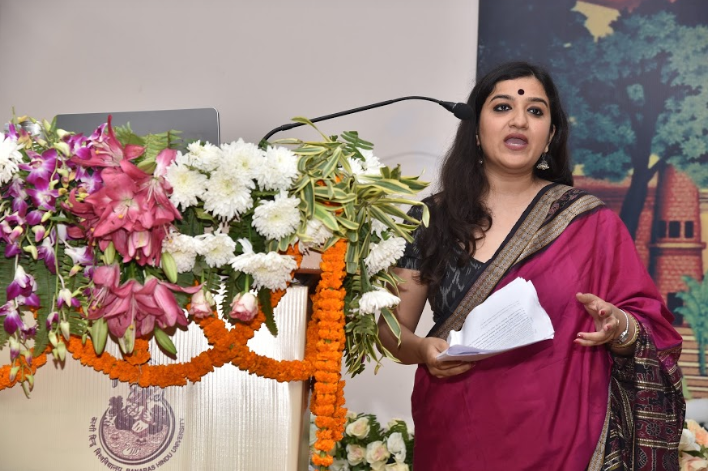 Paridhi David Masssey from Ashoka University shared her research insights on how British Colonial fraternity viewed the temple of Vraj from a condescending perspective at one end to a very sympathetic and patronizing attitude at another end. Sneha Nagarkar showcased her research from multiple texts from medieval period highlighting how the key deities of Braj Yatra evolved over time from Vishnu to Krishna and Yamuna to Radha. Sushant Bharati from Archaeology Department highlighted the contributions of Narayana Bhatta a medieval era Brahmin from Madurai whose deep study of scriptures was instrumental in relocating the lost spots of the pastimes of Lord Krishna. Shantanu Dey from Ramakrishna Mission shared perspectives on Mayapur, the traditional Vaishnava centre of Bengal which lost its significance to Navadwipa with the modern wave. 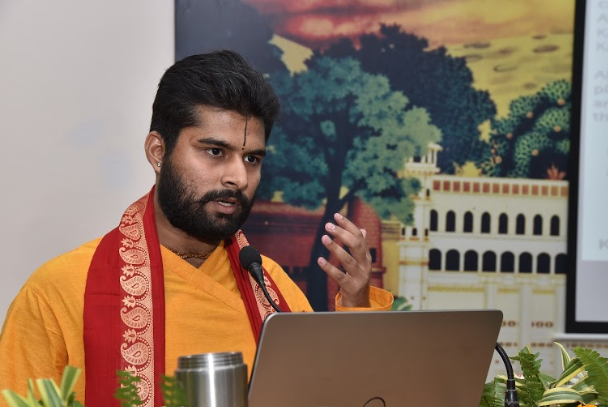 A. Shashikant shared insights about the Kootuva folk tradition of Karnataka where entire villages live through the immersive experience of Mahabharata. Celebrated with many local twists like Draupadi recalling Rama as a brother, the traditional way of recitation of Mahabharata involve major performances by local villagers on lesser discussed perspectives of Mahabharata. Varada Sambhus took audience through the famous Varkari sect’s pilgrimage where women participate with complete autonomy and assertiveness. She made a brilliant point on how neo-feminist movement views women’s movement through binary construct of feminism popular in western world and fails to capture essence of the strong powerful women of rural India. Prachi Moghe took the case of Khandoba tradition to highlight the importance of pastoral nomadic communities who are often the major patrons of similar folk gods. Monish Shah threw light on Mumbai’s little-known pre-colonial ancestor – Sopara which was considered a major pilgrim center as per Jain texts in addition to it being recognized with legends of Parshuram as well as Bodhisattva Surparaka. 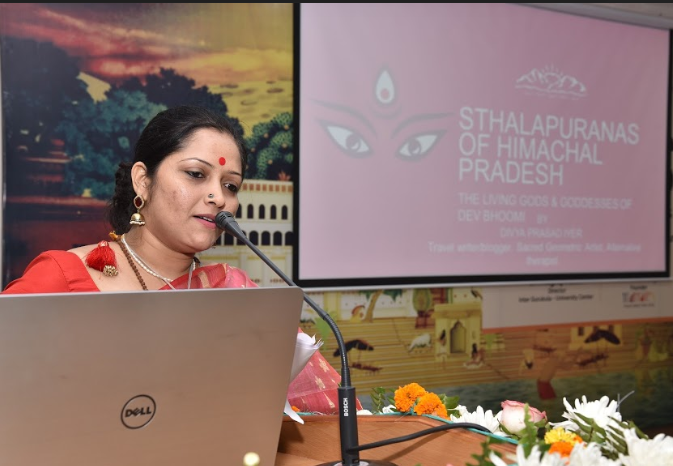 Arundhanti Sunder of Chinmaya Foundation shared stories how memories of Modh community was instrumental in reviving Goddess Modheshwari of Modhera(famous for its ornamented sun temple) after six centuries of oblivion of goddess. Divya Prasad shared the lesser known folk traditions of Himachal Pradesh where the legends of gods and goddesses are celebrated akin to day to day human emotions. She shared a unique tradition called Bharta which involves sharing of autobiography of Devata given by themselves.

Vinayak Pandey talked about the pilgrim circuits of Shekhawati involving the unique deity Khatushyam aka Barbaraika of Mahabharata whose stand to fight for anyone who’s on losing side irrespective of righteousness costed him his life on hands of Krishna. The beautiful mansions built by the highly successful merchants of the region are explored by French Universities as Coursework and yet are largely overlooked by Indian tourists. 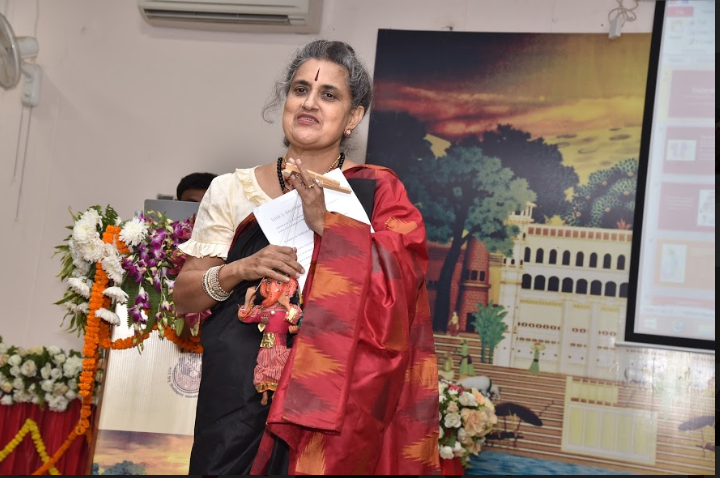 Akshay Krishna from Amrita University talked about little known Ramayana trail of Kerala. Local tribal communities have indigenized the tales of Ramayana especially around the stay of Sita with Lav & Kush and celebrate the legend. With many places like Amritsar in Punjab, Bithoor in UP & Avani in Karnataka, it indicates that the popularity of the epic led to a deep internalization in local legends in every region of subcontinent. Shivashankar from Vision India Foundation shared the tales of ancient but unique tradition of Tyagaraja in which Shiva is worshipped in an idol form (believed to be the idol worshiped by Vishnu) instead of typical Linga form. Aiswarya Mohan brought perspectives on the temples of Malabar which were destroyed by Tipu Sultan in the acts of religious persecution. Many of these temples are yet to be restored to their former glory. Prateek Pattanaik a 19-year Engineering student amazed the audience with his detailed scholarship on Chauttisa, the musical traditions of pilgrims coming for Jagannath temple. Vaijayanati shared insights on the Vaishnava pilgrim tradition of Tamil Nadu which recognize 108 Divyadesam  (abodes of Vishnu) and its evolution with modern times. 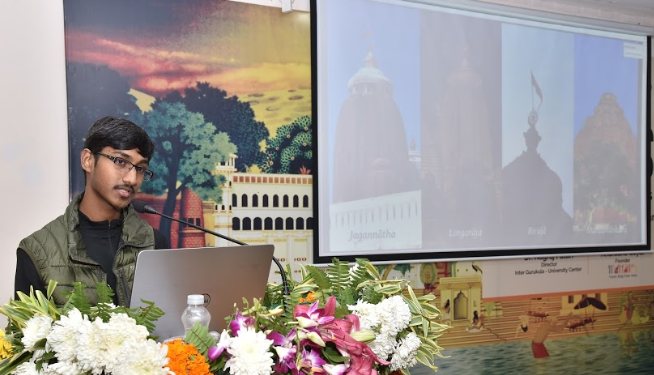 Subrahmanian Chidambaran detailed about Adiguru Shankaracharya’s travel trail across India which was instrumental in uniting the multiple offshoots of Vaidik traditions of India. He emphasized the importance of rivers in these arduous journeys of Adiguru who was seeking conversations via logic & reasoning all around. 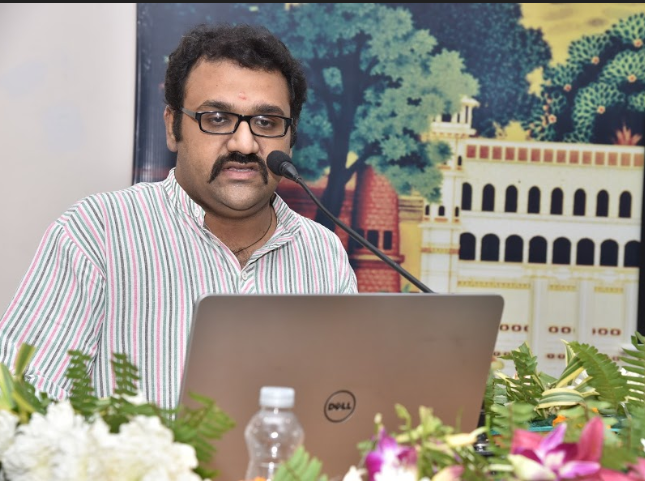 Maitri Goswami shared the key principles emphasized by Shri Vallabhacharya the famous Vaishnava master who had set up a series of 84 Baithak (House of worship) across regions patronizing different variants of Vaishnavism. He had emphasized the need of exploring the esoteric Vedantic meanings hidden in ShrimadBhagwat while doing pilgrimage. Shakuntala Gawde spoke about the greatness of Gokarna Tirtha. Kanakavalli Chari elaborated on the contents of a manuscript about Shukla Tirtha Mahatmya. 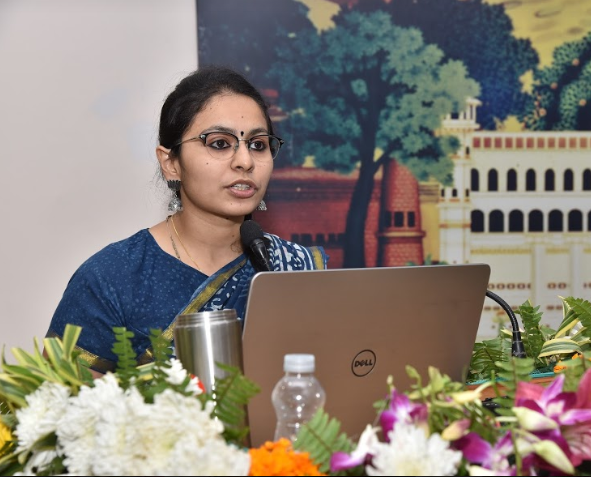 Chetan Patel from Shodhyatra shared insights on how experience in the roads less travelled can be used as great learning opportunity to explore the different frugal innovations of the countryside.  Amritha Darshanam – a unique concept tried by team of Amritha University identified multiple temples across Kerala and Tamil Nadu which have a predominant theme on some of the key Yamas & Niyamas (the essential Don’ts & Dos which are foundation to begin a Yogi’s life). They highlighted the need to present Yoga in its pure form as practiced by traditional Indians in alignment to the fundamental values to differentiate from the degenerated practices popular in West which have reduced it to mere physical exercise. Shrinivas Tilak highlighted the upcoming trend of seeing Swasthya i.e. good health as a goal of Yatras in the twenty first century. Bhavna KR highlighted the details in Charaka & Sushruta Simhita with reference to the specific herbs grown in different regions of India. She emphasized on how these insights can be well utilized to grow these herbs in same geography and create opportunities of Ayurvedic practices for tourism. 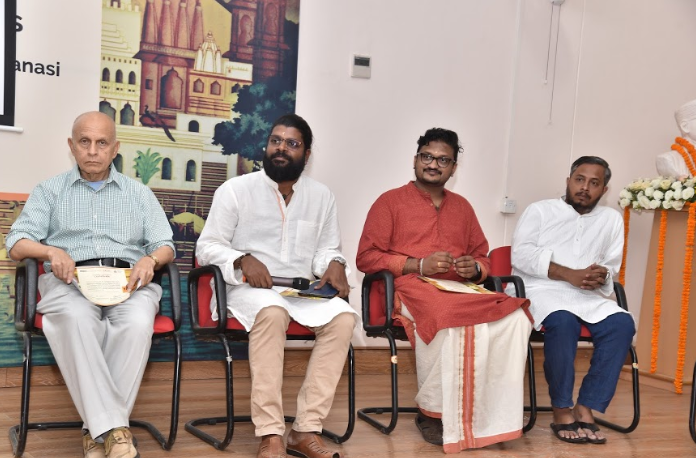 In the panel themed on ‘Designing New Age experience’, Arun M Bhatt shared the case study of how collective efforts of photographers had transformed a hitherto unknown bird sanctuary of Tal Chapar in Rajasthan to a fully booked and busy site within seven years. Pradeep Chakravarthy shared his personal experience where his rich insights on temples in Tamil Nadu clubbed with a travel logistic partner helped to create a great guided ‘Yatra’ experience for curious pilgrims. He shared the need to explore the immense potential of states across India in this relatively vacant field where we still don’t have many guides available with rich meaningful and spiritual insights on the temples.

(Pic: Participants at the conference)

The seminar was concluded with a wonderful Valedictory session presided over by Sanskrit stalwart and Emeritus Professor at SVDVS, BHU, Dr. Rewa Prasad Dwivedi. He spoke about the changes in Sanskrit Poetics. A Wonderful book titled ‘Bhaja Vishvanatham’ by Nitin Gokarn and Manish Khattary was launched in the session. 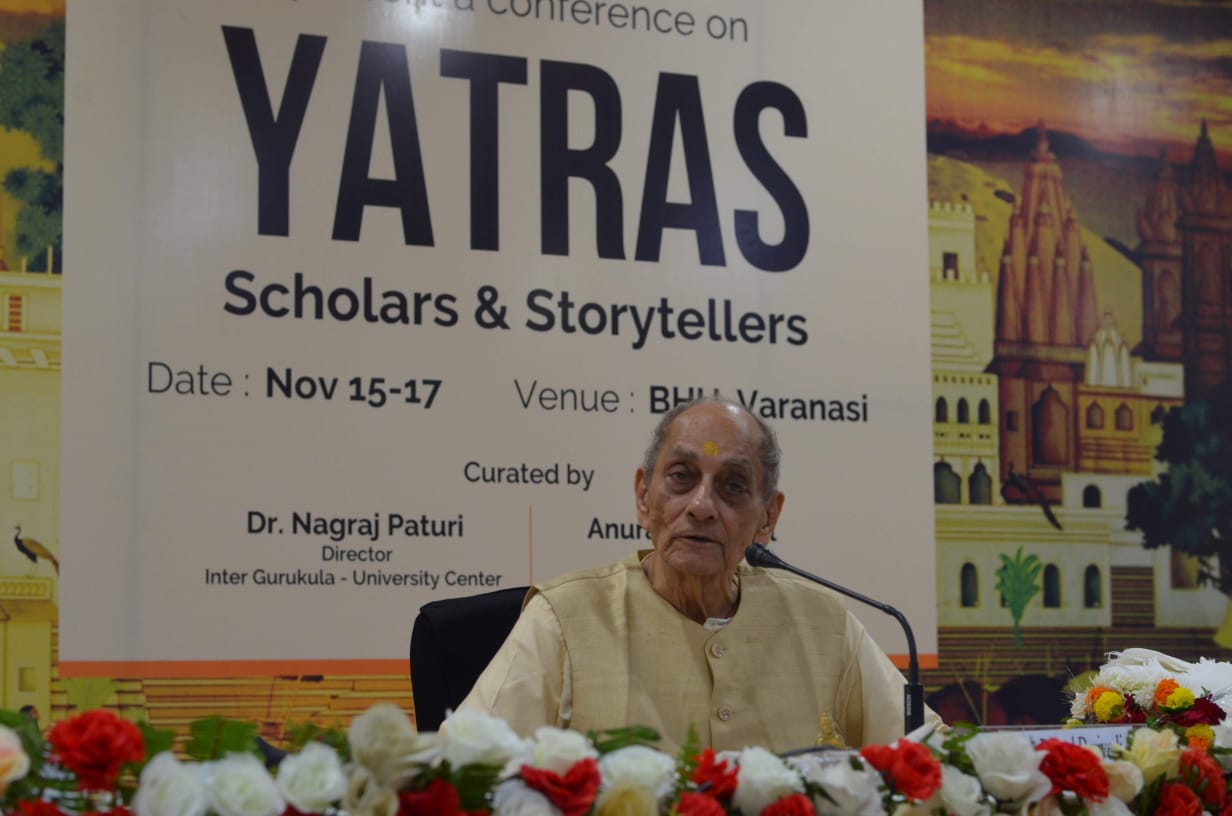 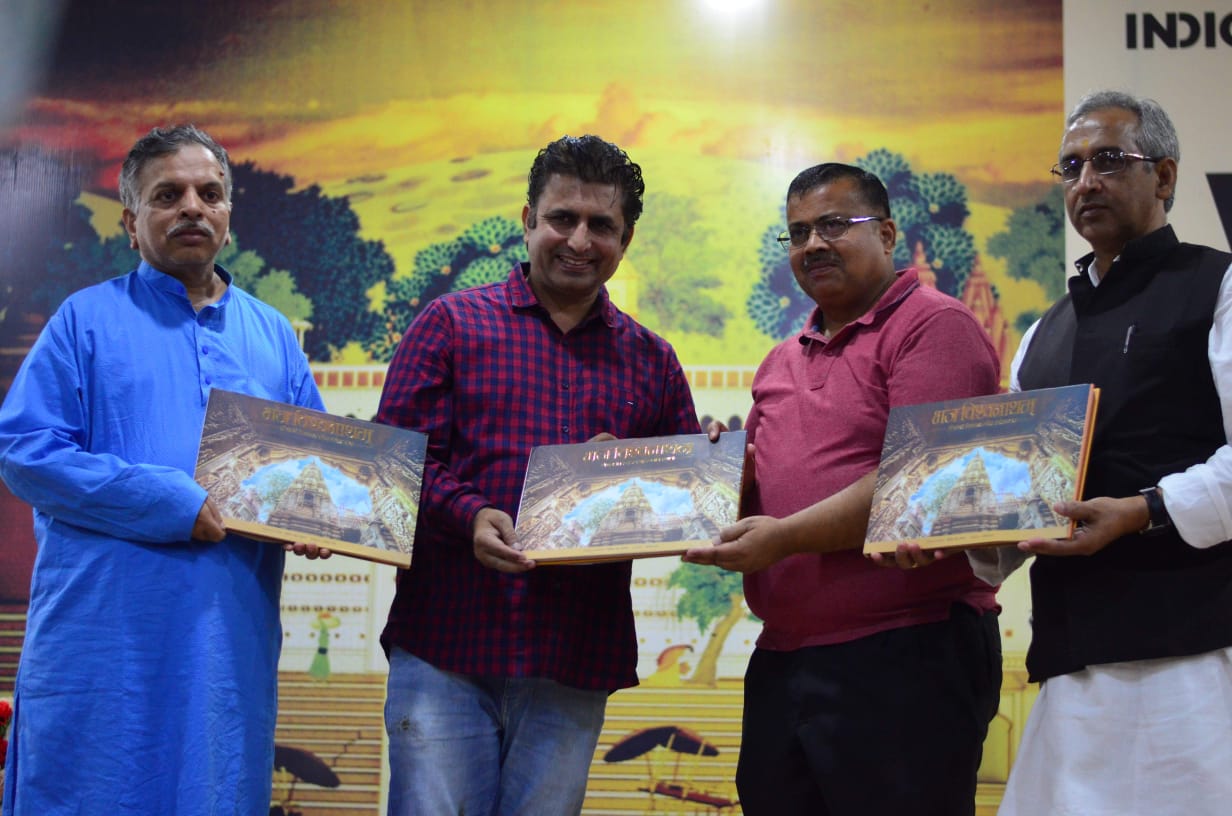 (Launch of the book Bhaja Vishvanatham in the Valedictory Session)

Like most urban kids from Uttar Pradesh, his life goals were always centered around the typical B.Tech -> MBA -> Job route. But the 'Indian'Read more