A Weekend of Transformation with Michel Danino 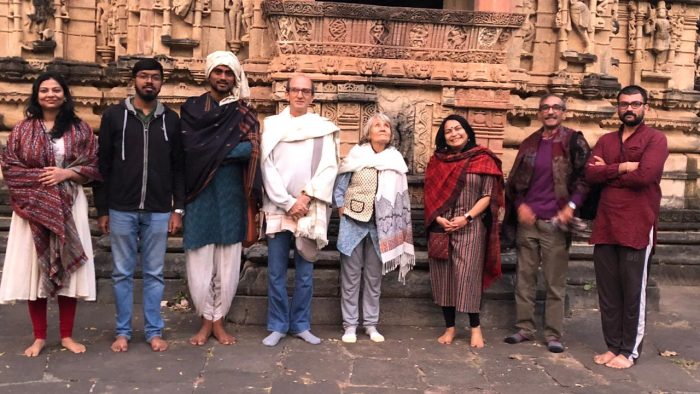 Very recently I was blessed to enter into the network of Indic Academy- a community of fellow Indic scholars collaborating to preserve and promote the Indic wisdom. Hari Kiran Ji, its founding member, mentions the need to restore our tradition of learning from Gurus, in an experiential immersive manner. Which is why, Indic Academy launched Weekend with Wisdom with great Indic scholars.

It is an opportunity for the like-minded scholars and professionals to get an opportunity to learn from great scholars in an informal, comfortable setting, in a free-flowing manner. For a short project role at IIT Gandhinagar, I had been blessed to attend couple of classes of Prof Michel Danino. Students get a rare opportunity of exposure to ancient Indian knowledge systems, science, technology, wisdom and ethics in today’s world.

Despite seeing him on a daily basis, I wanted to take this opportunity to also interact with fellow Indic mates, to understand how can we do our bit to promote such deep wisdom.  And thereby, I made it to my first Weekend with Wisdom with Michel Danino. Over the course of these two days, Michel went around a diverse set of topics ranging from Sustainable development, Rigveda, Saraswati Civilization, Intersections of physics & Mathematics with spirituality, challenges in education system and way forward. And with his vast knowledge, conviction, humility, and patience he did a complete justice to all the topics in the two days we spent together. 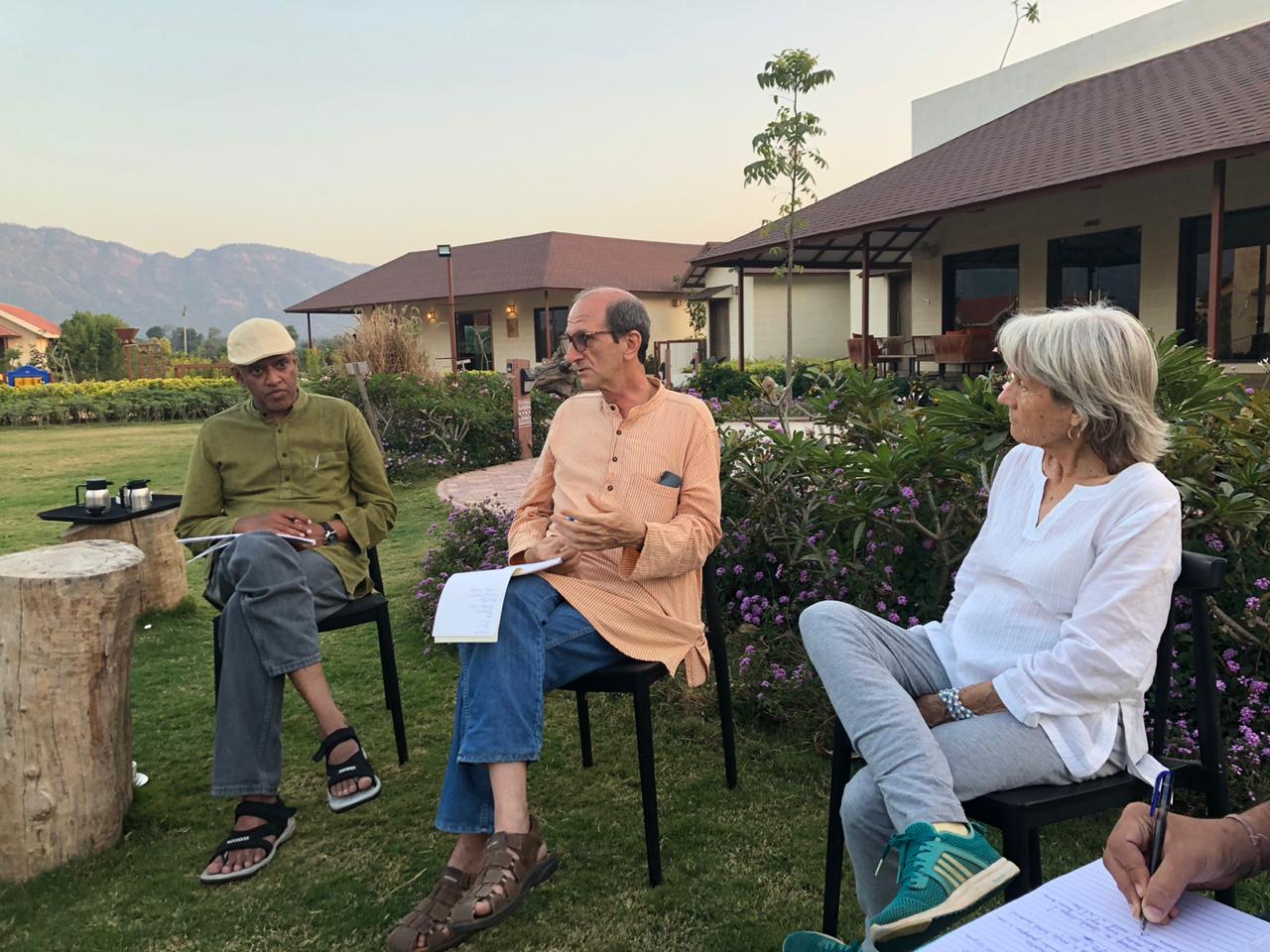 The session began with perspectives on where we are headed as a civilization. Pulling together perspectives from Leanorda Da Vinci, Sri Aurobindo, & David Suzuki,  the movement of 1910s, and Club of Rome in 1970s,  Michel established a very crucial point, that mere ideas don’t have any power. We may be having all fanciful ideas with respect to solving global problems, but in lack of an inclusive spiritual culture, our compulsive nature as a species is not changing. He pointed to a key observation of Dr Nandita Krishnan, on how as long as Ganga was regarded as sacred, it was not polluted by us Indians. But ever since the collapse of classical sense of Indianness, we started seeing her sacredness as just a pagan custom, we began an unprecedented pollution of the river.

We moved on to the frequently laid accuses on ancient India with its ‘oppressive’ caste system. Michel shocked us by sharing observation of M.D. Srinivas on how in the pre-colonial Tamil Nadu villages, lower caste communities were having the biggest houses.  Many scholars choose to ignore the benefits of the safety net, which the lower caste community got with reference to the community support and assured economic opportunities. The narratives of lower caste entries into the higher Varna orders like Kshatriyas have been frequently side-lined by the leftist scholars.

We often ignore the fact that the amount of agricultural yield in India 200 years back, is same as what we have achieved post green revolution, with multiple ill side-effects. All of this was possible by an efficient knowledge transfer preserved via caste system. I realized how we have carried in our mind many faulty notions, considering the ancient agricultural techniques as primitive and unproductive. In an age when techniques could be passed by family-based practices only, it does highlight the often-ignored benefits of caste system suiting that age.

Discussions moved on to the politics of conversion & the lack of it, in the medieval age. Michel highlighted how caste system was a passive defence against the forceful conversion by Islam, as it provided a social security especially in the rural areas, from which no one wanted to go out. Abu’l Fazl, the Muslim biographer of Akbar even promotes caste system in his memoirs. I have always been a strong critic of our ancestors who promoted caste system. Personally, it was a revelation to see the other beneficial side, which I never realized amidst the literature about an ‘oppressive Brahminical patriarchy’.

We then talked about the ancient cultures of the world, and their adoption of fundamental deep expressions of human minds through common symbols. Modern scholars often get trapped by looking at similarity of symbols of ancient culture and keep tracking their adoption to be linked to common sources of human migrations, failing to realize that it is indeed possible for absolutely disconnected cultures to express themselves with common symbols.

In this discourse, Michel gave examples from Chauvet Caves of France, Pictish culture, & African cultures. By asserting all of these to be linked with one master culture, scholars keep coming up with hypothesis of migratory patterns; failing to recognize the powers of human mind having a universal dictionary at a deeper level.

Next day, we started with an early morning trip to Abhanagari temple ruins – a cluster of 60 temples  from 10th century, spread over these forests. All the temples bore the marks of medieval Islamic onslaught on the broken idols. And despite that onslaught, there was so much left of the artistic achievements of the sculptors. The commonality of iconography in Jain and Shaiva temples, reminded us of the inclusive times of mutual respect of that foregone golden age. 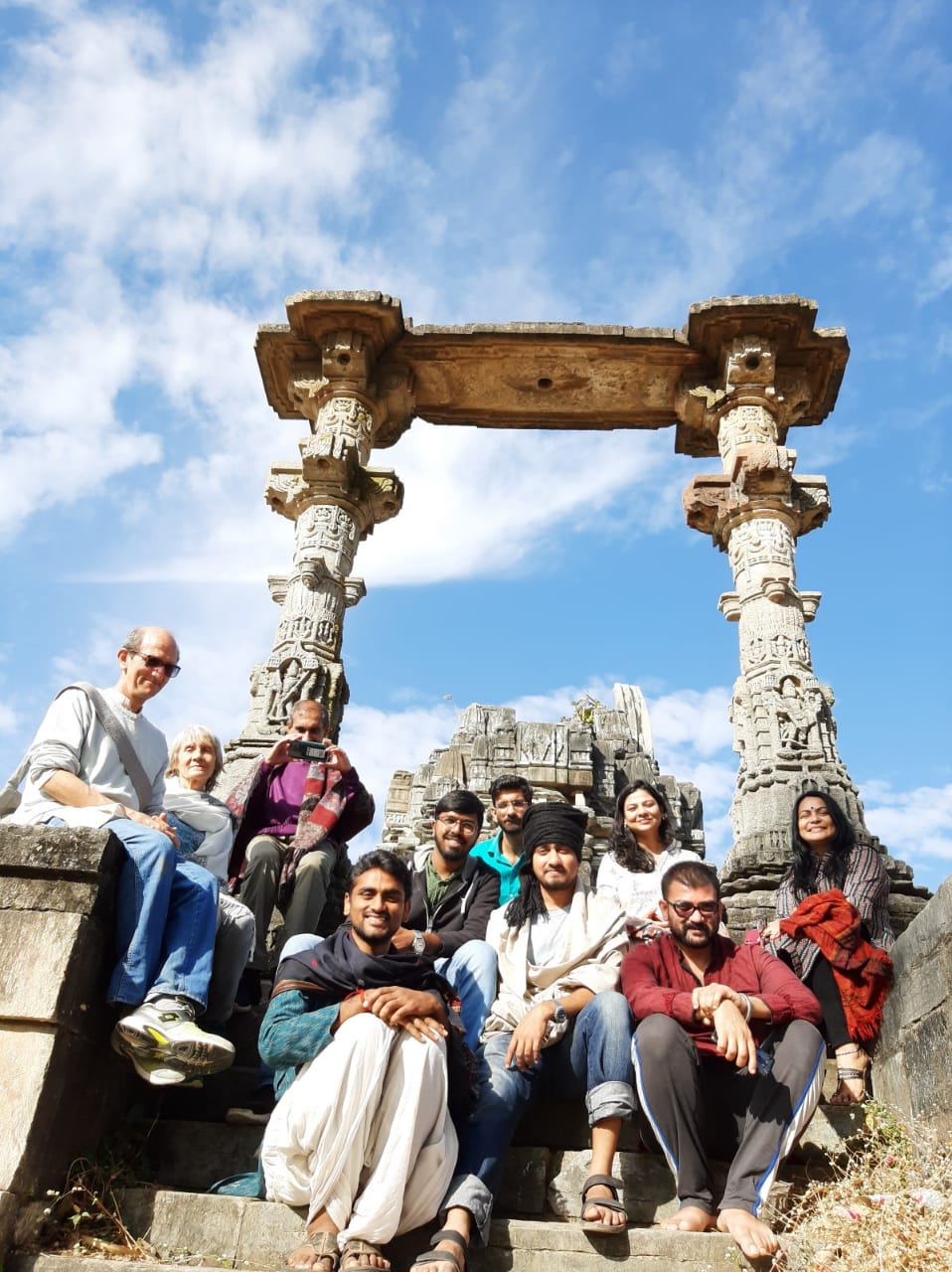 After breakfast, the discussions on Rigveda and the culture it represented began. From Yaska of First millennia BC to  Sayana of Vijayanagara period, and Sri Aurobindo of 20th century, the lost meaning of Vedas, and validation of a deeper esoteric essence has been an ongoing theme. Michel highlighted how the personal ecstatic experience by Sri Aurobindo made him look at the metaphorical meaning of the words like Agni, Rishabha, etc. in the texts to concepts much deeper within the consciousness.

Sri Aurobindo was able to relate his personal experiences with what has been mentioned in the Vedic texts. Given that we claim so much of our practicing culture from Vedas and yet hardly find any Vedic scholars, I personally got drawn to read ‘The secret of Vedas’ by Sri Aurobindo. In his own paper on ‘Demilitarizing Rigveda’ Michel has argued that there is not a single verse of Rigveda where horses, chariot, and spoked wheel come together, debunking the myth spread by leftist scholars on how the Aryan invaders riding horse pulled chariots with spoken wheels massacred Harrapans.

Leftist scholars have taken the literal interpretation of words like Ashva to mean as horse instead of energy/speed and Gau as cows instead of light. Despite the fact that it makes absurd translations as ‘Oh Goddess of dawn full of horses and cows’, such translations have been considered ‘scholarly’.

While Shiva’s killing of Tripurasura the demon with three floating cities is accepted as a tale to be interpreted on metaphorical level, Indra’s destruction of Pura of the mountain within us makes him as mascot of Aryan invasion with plunder of Harappan cities.  Ultimately the key question we all need to ask is- if purely pastoral people are capable to create the profoundly deep concepts about cosmos as found in Rigveda.

As the discussions kept flowing, we came to the aspect of interpretation of Bhagavadgita by GandhiJi, who justified the call of non-violence to the extent that, we asked British to surrender their beautiful lands to Germany, and women of Naokhali to surrender their bodies to Muslim rapists. I often wondered how GandhiJi was inspired to justify this with Bhagavadgita – a text in which Krishna asks Arjuna to do his Dharma of avenging humiliation of Draupadi.

GandhiJi had justified this spin of interpretation of Bhagavadgita by equating Kauravas as the compulsions within ourselves, and not as Adharmik enemies outside. Michel quoted the rebuking of such interpretation by Sri Aurobindo who questioned that this been the case, why would  Krishna make a statement that he has already killed the Kauravas, Arjuna has to just do his duty. 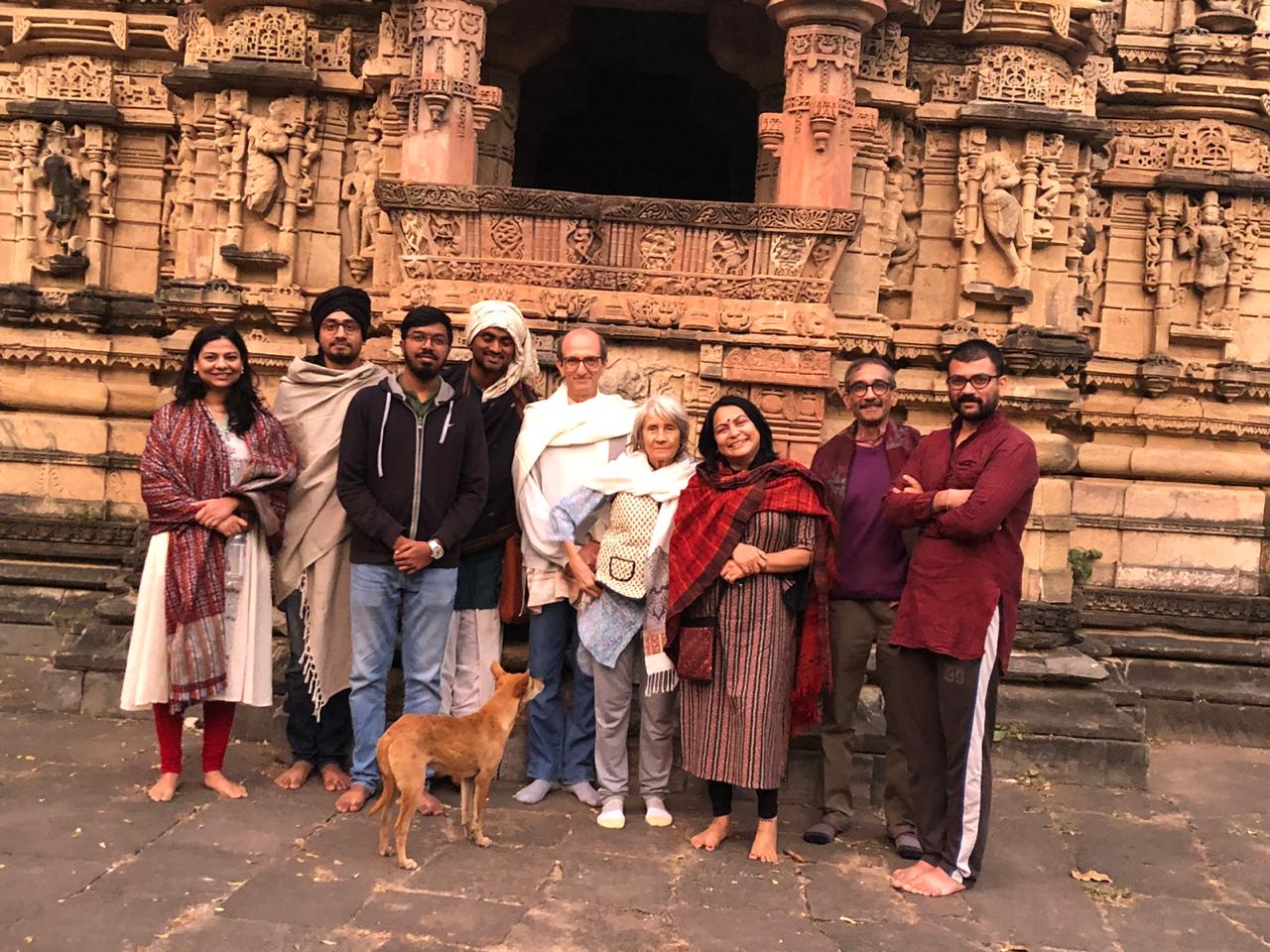 In his book on the ‘Lost River‘ Sarasvati, Michel has made a strong case of Rigveda compilers being prior to mature Harappan phase. He gives us details on the hundreds of streams which flow in between River Satlej and River Yamuna, indicating a fanning of river Satlej as it shifted westwards, due to tectonic uplift of the region.

To his critics who believe the Harappan civilization to be established after the drying up of Saraswati, Michel draws our observation to the 245 enclosures in Kalibangan facing the edge of Gaghra Banavali river. He asks why would Harappans build houses on the edge of a river if it would have been dry.

Michel mentions about the first recorded pilgrimage in Indian texts as the Saraswati Teerthayatra stated in Jaiminiya Brahmana which used to start at Vinashana Teertha and then go upstream. In that age, Saraswati as seen as goddess of inspiration. People would take a dip in the river and invoke the goddess to inspire them to achieve their Dharma. With the drying up of the river, people created the memories of River Saraswati in places far off from the original course.

I had been very curious about the survival of Rigveda tradition, despite the collapse of Saraswati civilization, during these three centuries of low precipitation. With a smile he explained how such Shruti texts don’t need the urban civilizations to survive, but just a continuous chain of forest dwelling practitioners dedicated to the tradition. I couldn’t help not wondering on how arrogantly we think of our urban centres like museums, convention halls, & institutes etc. as ‘protectors of heritage’ while the real preservation of ancient knowledge had been done by such great masters dwelling in the forests. 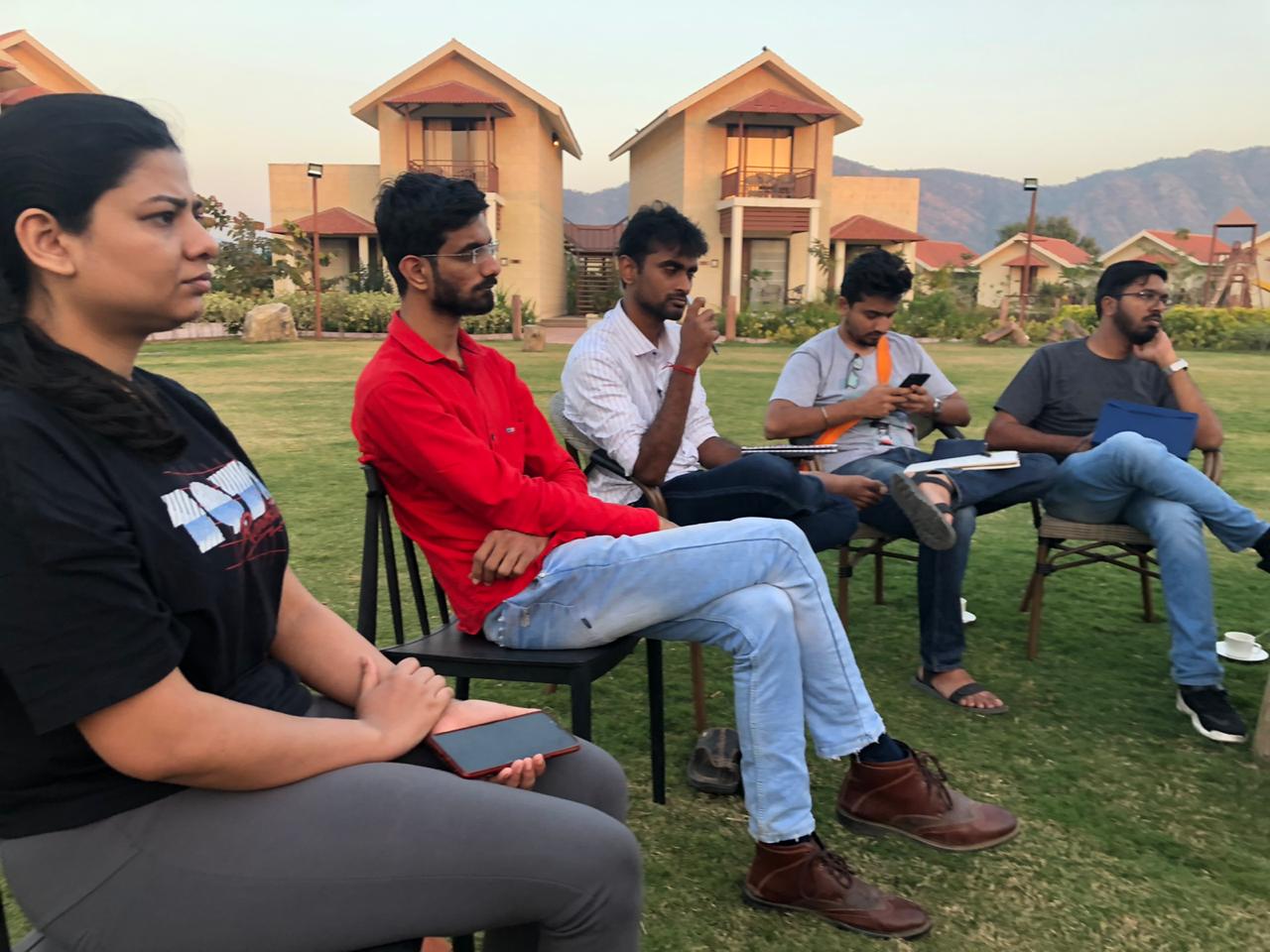 The discussions went on to archaeological findings of Harappa including seals. In the next couple of sessions which spanned diverse topics, I took following key takeaways:

– For the kind of heritage India has, we have ideally a lot of avenues for students of archaeology. And yet our crippled system fails to create such opportunities, ensuring we get very mediocre talent in this field

– The fact that  human mind with its limitations, can never have a complete grasp of the age-old wisdom of our texts,  if it uses just the thinking logical faculty, is thoroughly ignored in academia

– Our university system post 1947 is structured against the encouraging of original thinking. No wonder we don’t have many Nobel laureates

– Most Indian academicians follow the principle of ‘Westerns have the theory; we are the data’ paradigm

– To avoid running into the wall of the ‘Greed is Good’ philosophy, we need to orient our education highly towards the environment.

On a departing note, Shefali asked as to how do the members of Indic community do our bits to gain back the lost grounds of confidence on our heritage. Michel highlighted that it is really important for everyone in this cause to pick up a chosen field, and build up a solid foundation in same. If we don’t build it, it shall always remain a hard battle to win.

Also, it is not enough that we work for the cause, but we also need to work in a way, which ensures that our work is not wasted. This very thought has stayed with me- working together in specific areas of interest, and delve deeper and deeper in it to reclaim the lost glory of our nation; because that is the real need of the hour.

Like most urban kids from Uttar Pradesh, his life goals were always centered around the typical B.Tech -> MBA -> Job route. But the 'Indian'Read more