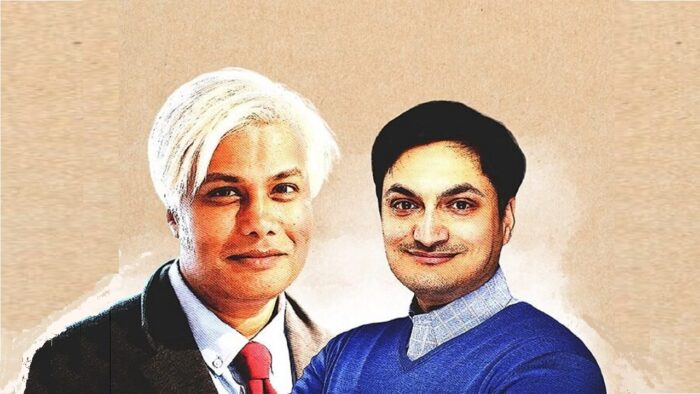 Broadly speaking, scholars can leave their legacy in three forms: digital, textual, and through the scholars trained under them who will continue their distinctive school of thought.

With a view to nurturing the legacy of venerable scholars rooted in Bhāratīya thought, INDICA conducted a series of seminars under the ‘legacy partnerships and retrospective prospective webinar series’.

Grants were then offered to Shri. Balagangadhara Rao, Shri. Michel Danino and Sri. Koenraad Elst for their ongoing research so as to result in a textual legacy. Online courses are offered through our INDICA COURSES platform as the digital legacy.

We are now moving to establish the third form of legacy of these distinguished scholars by nurturing students through intensive training and fellowships. At INDICA we prefer to frame this as one of establishing a guru-śiṣya paramparā. 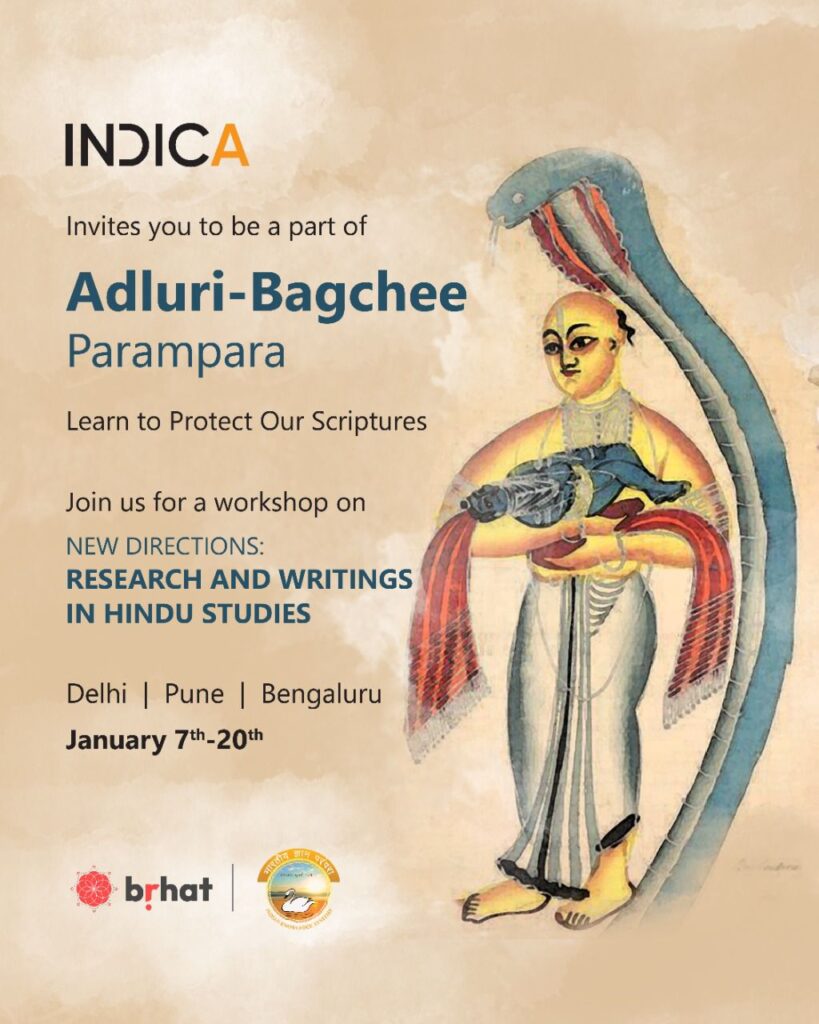 The present series of workshops is our attempt to create one such, an Adluri-Bagchee Paramparā, where we train students in the sampradāya of these great scholars.

Humanities education is in a state of crisis all over the world and particularly so in India. The paradox of  Atmanirbhar Bharat without the fundamental reorientation of the humanities and social sciences towards indigenous knowledge systems has been noted by many public intellectuals. The brightest minds continue to gravitate towards pure sciences, while philosophy, poetry, literature, the fine arts, history, and culture, the areas that make a civilization what it is, have been neglected and relegated to the back burner.

It is in this context that INDICA seeks to design a unique method to  reclaim our humanities education by reviving the tradition of  Guru-śiṣya paramparā. The idea is to create new ‘learning traditions’ or Sampradāya anchored in seminal scholars and visionaries. The first step towards this vision is this announcement of the ‘Adluri Bagchee Fellowship’.

Bṛhat – A Creative Culture Research organisation and IKS CoE of the Ministry of Education at AICTE will collaborate in executing this vision.

In Dr. Vishwa Adluri and Dr. Joydeep Bagchee, we have two of the present world’s paradigm-shifting philosophers who contribute to the new global trend of rigorous and theoretical interrogation of the ideological foundations of some of the contemporary social sciences and humanities disciplines, such as history and their applications such as Indology. They bring out the traditional insider’s perspectives through an academically rigorous and contemporary approach that these ideological foundations constantly harm. One may even call them modern-day Rishis; those who are farsighted, those who can see the big and the whole picture. With brilliant Indic minds, they have squashed an entire field of study called ‘Indology’ that stemmed from the German Protestant belief system and behaviour and established it as bogus and racist. They write about this in detail in their book ‘Nay Science’ and rubbish claims of the scientific study of Indian (Hindu) texts by German Indologists as non-science, i.e., Nay Science. Professors Adluri and Bagchee are not only exemplary in their intellectual giantess but also in the courage of conviction that they carry. They have been teaching for some years now in an academic setting both in the U.S. and in Germany, and also at the Hindu University of America (HUA).

To prepare a team of research scholars well versed in this new postmodern paradigm and its application to develop a new Indology and the study of Indic thought, ninety scholars, including PhD candidates, post-docs, faculty, and public intellectuals, will be chosen from across the country. A two-day intensive workshop with Dr. Vishwa Adluri and Dr. Joydeep Bagchee will be held in New Delhi, Pune, and Bengaluru. Each workshop is limited to thirty scholars. The workshops will be held between Jan 7th and Jan 20th, 2023. Out of the total of ninety researchers, ten will be selected for an annual fellowship. These ten intellectuals will then be trained by Dr. Adluri and Dr. Bagchee for a year. Under the guidance of both these stalwarts, the chosen scholars will then explore various facets of Indology and Mahābhārata from an emic perspective, i.e., from an insider practitioner’s point of view.

Each of the selected students will be provided with a total stipend amounting to Rs 1.5 lacs in four quarterly instalments after a go-ahead by the professors. The various assignments and other deliverables will be made accordingly by the scholars-at-large as required to the professors, after one-on-one consultations with them online.

INDICA also believes that the pedagogy for teaching and learning Indian Knowledge Systems (IKS) has to include an immersive and experiential learning environment. In line with this vision, five retreats titled “Weekend with Wisdom” were earlier held with distinguished scholars such as Shri. Shrikant Talegiri, Shri. Subhash Kak, Smt. Meenakshi Jain, Shri. Vinod Vidwans and Shri. Michel Danino. These retreats were designed to replicate the ambience of a Gurukulam.

Similarly, an intensive in-person one-week workshop with Professors Adluri and Bagchee will also be conducted in August 2023 during the course of the year-long engagement.

A certificate will be issued at the completion of the said time period to all the research scholars who successfully complete the fellowship.

The purpose of this endeavour is to ensure that the legacy of the Adluri-Bagchee philosophy and school of thought is carried forward. These professors will create a corps of critical thinkers, who will serve our bhāratīya inheritance well, with their sevā to its heritage through their own personal projects in the future. A manifesto at the end of the workshops providing guidelines and a framework for the fellows and other scholars to adhere to will be published. We also plan to ensure continuity of this tradition and scholarly framework through annual publishings, conferences, consortia, etc.

Readings: Excerpts from The Nay Science; Appendices from Philology and Criticism 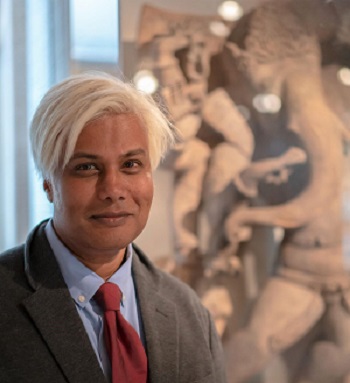 Professor in the Philosophy Department at Hunter College, New York

Vishwa P. Adluri is a Professor in the Philosophy Department at Hunter College, New York, and the author of over a dozen articles and essays on the Mahābhārata. His work mainly focuses on the reception of ancient thought—both Greek and Indian—in modernity. He is the author of Parmenides, Plato and Mortal Philosophy: Return from Transcendence (Bloomsbury), The Nay Science: A History of German Indology (OUP) and Philology and Criticism: A Guide to Mahābhārata Textual Criticism (Anthem) and has edited numerous volumes on the Mahābhārata, including Argument and Design: The Unity of the Mahābhārata (Brill). Vishwa has a PhD in Philosophy from the New School for Social Research, New York, a PhD in Indology from Philipps University, Marburg, and a PhD in Sanskrit from Deccan College, Pune. Prof. Adluri’s papers on the Mahābhārata are available here: https://hunter-cuny.academia.edu/VishwaAdluri 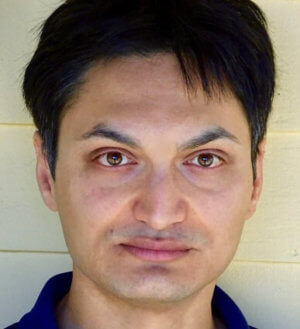 Core Doctoral Faculty at the Hindu University of America

Prof. Joydeep Bagchee is Prof. Adluri’s student and a Berlin-based researcher and intellectual historian. He has a PhD from the New School for Social Research, New York in Philosophy. He has studied Indian and Western philosophy and completed a PhD in German philosophy under Dr. Adluri’s guidance. He is a co-author of The Nay Science: A History of German Indology (OUP) and Philology and Criticism: A Guide to Mahābhārata Textual Criticism (Anthem). He has also co-edited the volume Argument and Design: The Unity of the Mahābhārata (Brill). Prof. Bagchee serves as core doctoral faculty at the Hindu University of America. Prof. Bagchee’s work may be downloaded here: https://independent.academia.edu/JoydeepBagchee