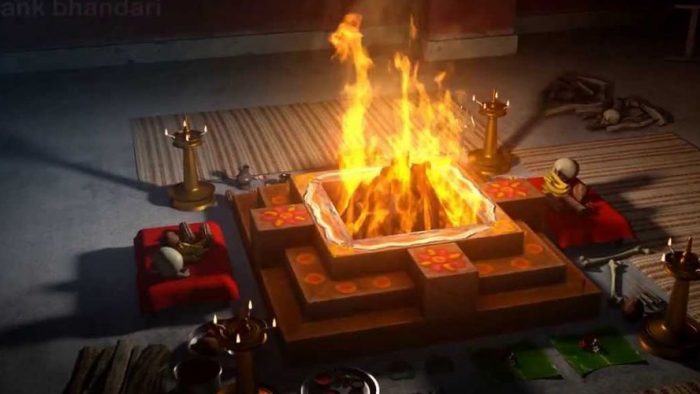 Pūrva Mīmāṃsā is one of the oldest School of thought, probably dating back to the 3 rd century BCE, that engages deeply in the interpretation of Vedic texts for a pragmatic application of prescribed rituals in the daily life of a Vedic adherent. In the early phase of philosophical development in the Indian sub-continent, the Pūrva Mīmāṃsā or simply the Mīmāṃsā school reigned supremacy over other schools owing to its popularity of practical ritualistic application.

The Mīmāṃsā, emphasizing on the karmakāṇḍa portion of the Vedas, found its systematic presentation in the aphoristic work of Maharṣi Jaimini (300 – 200 BCE) which emphasized the philosophy of life, viz., karma in the form of dharma in the very opening aphorism – athāto dharma jijñāsā. The pre-Jaimini preceptors who are identified as authoritative sources referenced by Jaimini are Bādarāyaṇa, Bādarī, Ātreya, and Kṛṣṇājini, thus claiming the presence of Mīmāṃsā thought at least two centuries before Jaimini. Not withstanding the overpowering of the Vedāntic philosophical thought, the Mīmāṃsā school re-emerged as a darśana bifurcating into two main schools viz., the Bhāṭṭa Mīmāṃsā (660 CE) and the Prābhākara Mīmāṃsā (700 CE) and much later, a third school as of Murāri Miśra (1300 CE). Like any other philosophical system, the Mīmāṃsā school too is rich with a gamut of commentarial literature and independent prakaraṇas delineating the essence and fundamentals of Mīmāṃsā philosophy. The celebrated commentary to the Jaiminisūtras is of Śabarasvāmin and some prominent Mīmāṃsā prakaraṇas of recent study is the Arthasaṃgraha of Laugākṣi Bhāskara and Mīmāṃsā Paribhāṣā of Kṛṣṇa Yajvan.

In recent times, the treatment and study of Mīmāṃsā darśana in academic institutions – both the modern as well as the traditional style of learning – has been relegated behind in comparison to the study of Vedānta and other darśanas. The Mīmāṃsā principles and maxims finds prominent place in the metaphysical and epistemological discussion in the philosophical literature of other darśanas, whereas the position of Mīmāṃsā rightfully as an independent darśana is almost out of the circuit of academic discussion.

The Chinmaya Vishwavidyapeeth, situated in the birthplace of Ādi Śaṅkara, proposes to conduct a seminar exclusively devoted to the current studies and development of Pūrva Mīmāṃsā darśana primarily encompassing epistemology (pramāṇavicāra), linguistics (vṛttivicāra) and hermeneutics (adhikaraṇavicāra) by bringing together eminent traditional scholars from various parts of the country.

The seminar is proposed under the expertise and guidance of Shri R. Mani Dravid Sastrigal, one of the foremost, prominent and leading traditional scholars specializing in the field of Vyākaraṇa, Nyāya, Mīmāṃsā and Vedānta.

This seminar focusses on bringing together the traditional Mīmāṃsā scholars who have been working on the Mīmāṃsā exegetical works, with years of experience in dissemination of terse Mīmāṃsā concepts within classrooms and in major symposiums and conferences conducted in the traditional manner known as the Vākyārthasadas. The main objective of this maiden seminar in the traditional style, rendered in Sanskrit, is to record, transcribe and publish the research outcomes of the traditional scholars in English with a hope to draw the attention of Mīmāṃsā and other interested scholars from around the globe. This seminar also aims to gradually create an atmosphere for academic exchange and discussion between the traditional and modern scholars exclusively pertaining to Mīmāṃsā darśana. The Chinmaya Vishwavidyapeeth shall also serve as the hub to document and preserve the academic achievements and contribution of traditional scholars in various fields of knowledge thus maintaining a record of growth of scholars in modern India for posterity.

Indic Academy is providing a travel grant of upto Rs. 15,000 each to two scholars or students engaged in the study of Mīmāṃsā. If you are interested in obtaining this grant, please apply for the same here by filling the form.

Indic Academy is also supporting the seminar by providing an event grant to the organizers.

Seminar: Pūrva Mīmāṃsā Philosophy – Current Studies and Research in the field of Epistemology, Linguistics and Hermeneutics

More details can be found in this document.