Summarised For You: All The Sessions At The Swarajya – Indic Academy Writing Workshop 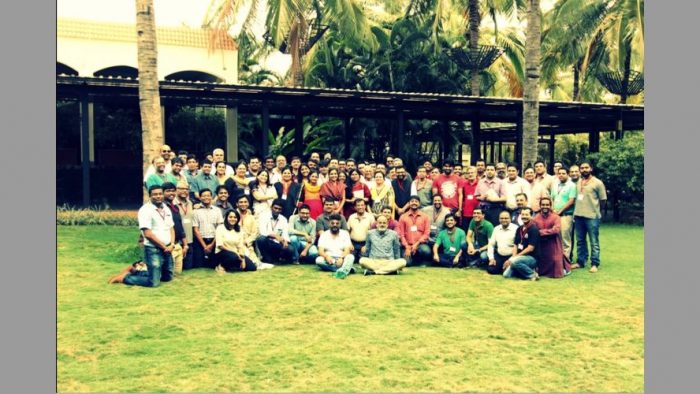 From 9-10 April, Swarajya in collaboration with the Indic Academy, organised a ‘Writer’s Workshop’ which had sessions on specific themes of writing such as on economics, political satire, popular history, visual story-telling and creative non-fiction.

The workshop took place at a location in the outskirts of Bangalore. Over eighty participants attended the event with most of the attendees coming from outside Bangalore.

The first speaker of the day was MJ Akbar. He explained the difference between effortless writing and effortless reading. He specified how writing requires immense psychological and motivational efforts, and he himself does not believe in anything called effortless writing. In his words writing is like sandpaper, where one has to constantly polish the prose. Even though one does not possess vocabulary like a dictionary one’s imagination can be sufficient to write with the limited set of words one knows.

MJ Akbar with R Jagannathan at the workshop

His prime advice to improve writing in English was to read and understand concepts noted down in Aristotle’s Poetics, where it is stated that every sentence in every essay has a beginning, a middle and an end. Even single word sentences are a tactical approach in writing prose, but even that should have an implicit beginning, a middle and an end to ensure connectivity.

Mr. Akbar then went on to explain how in his college days he was asked by his professors to spend substantial time devoted to reading the King James Bible to grasp the foundations of the English language. He specified how one of his professors taught him Macbeth, detailing the background and intricacies of Shakespeare’s works.

Mr. Akbar then specified that one should join journalism not to write but to communicate. As an example he said in a hypothetical situation he would have employed Shakespeare because he knew how to capture the audience like Salim-Javed did in 1970’s. That is what differentiates Shakespeare from other great writers like James Joyce and Leo Tolstoy who will not make it big as journalists.

R Jagannathan On Writing For The Web

R. Jagannathan made a presentation and spoke about issues involved with writing for the web and print. A summary:

To be a good writer one needs to be well-informed on grammar, vocabulary, and one needs to be in the habit of reading. Along with that one needs to be very disciplined. One also needs to develop their own style. He suggests to follow the style of The Economist: explain the message in small easy words instead of long difficult words.

A section of the participants

A user guide to good writing was also provided in this talk. Mr. Jagannathan specified the importance of punctuations in sentences, as well as expressing numerical terms in simple words for people to understand.The talk also specified the difference in writing for print medium and web medium, since word limit, attention span of readers are quite different.

Hindol Sengupta started by claiming that creative non-fiction shares the core concept of Vedanta which is the self. He then pointed out how in India people claiming to be believers of diversity are actually very single-minded and are reluctant to accept the other view. Hindol then narrated how his background from a middle-class Bengali family differentiated his writing on fashion. That difference made it easier to look at every topic realistically. He believes that a realistic and personal description of topics is what makes the genre of creative non-fiction different since it gives the outsider the inside view.

He claimed that there are demons in our conscience which we as Indians share connected to struggles in life. Hindol went on to narrate how his background made it easier for him to understand why a certain section of the elite public intellectuals believe they are the perfect set of people to understand India and how that section have a negative view of liberalisation, the victory of Narendra Modi and the aspirations of other Indians.

Vivek Dehejia focussed on how to write on economics, he started by differentiating economics writing in Anglosphere and in India. The difference lies in the history of economic thinking in post-independent India. And also one needs to see the context of certain terms like ‘reforms’ when used in Indian context since the political economy of India is very different from that of the Anglosphere.

Vivek Dehejia during a panel discussion

Vivek Agnihotri On The Politics of Story Telling

Vivek Agnihotri described there are three types of politics in Hindi cinema as explained to him by one of his mentors:

i. Power Politics – If you are friends with powerful people you can manipulate the system.

iii. Sex Politics – Earlier women were the centre of sex politics whereas now men are also part of it.

Mr. Agnihotri explained how the history of India can be understood by looking at the villains of Hindi films during different phases.

The third phase cited above started from Indira Gandhi’s time. It is at that time Amitabh Bachchan emerged and ‘became’ the angry young man. Early 40s-60s films were dominated by literary figures from Bengal, from a leftist background which showed the films with stories emphasising social change.

From 1990’s onwards the presence of villains reduced, and the Hindi films started showing NRI themes. From that time onwards Hindi films have lost original storylines. Vivek Agnihotri claimed how a certain set of elite cultural activists control the narrative and how the same group tried to derail his film project (Buddha In a Traffic Jam).

Sanjeev Sanyal started by saying how our academic history itself is biased and makes us feel inferior. He then went on to describe how in writing popular history one should choose and frame the subject followed by rigorous research. Research includes reading primary as well as credible sources and a variety of materials including stuff one may not agree with. It is also important that one visits the sites that is part of the topic (like Panipat if one wishes to write on it).

While writing, Mr. Sanyal suggested one must use simple popular language over technical ones. The writer should ensure that the flow of storytelling should be interesting and less academic. The writer should let the facts speak, and reduce the personal viewpoints. He finally suggested to use humour and anecdotes when necessary to sustain readers where they can ease off.

Anand Ranganathan gave a very interesting analogy on writing fiction from methods he learned in biochemistry. He went on to explain his take on writing. Anand explained why one should take breaks while writing a book instead of writing continuously. He is also against setting up deadlines for writing fiction. Unlike some writers he feels there should not be any tampering with the sentence length since it is the best gauge of the mood or rhythm of a passage or a character or a scene.

Anand Ranganathan and Rahul Roushan pose for a photograph with a participant from Bangladesh.

He then read excerpts from two of his books, ‘The Land of the Wilted Rose’ and ‘For Love and Honour’. He then suggested reading as many biographies as possible to understand the mindset of the author. ‘Ranga uncle’, as he is fondly addressed by his fans, believes one should read a lot of non-fiction while writing fiction. He ended by reading excerpts from the manuscript of a book he co-authored with Chitra Subhramaniam.

Madhu Kishwar explained how her generation was inspired by the Independence struggle, and how in her early days as co-founder of Manushi they aimed to bring out the story of poor and the marginalised. After describing her work with Manushi she then showcased a documentary she made which showed the harshness in life faced by street vendors, rickshaw pullers and other working classes.

Madhu Kishwar during her presentation

After finishing her documentary she suggested that we need to give opportunities to the working class instead of looking down on them.

Rahul Roushan – Who Is A Troll? Satire On The Web

Rahul Roushan requesting audience members to not laugh until his session is over.

He suggested that reversing views, tools of irony and importantly sarcasm can help in making good satire. And it is instructive to get a draft read by others in order to know if it is humorous and if it is safe. He ended his talk by suggesting that a satirist must be ready for deliberate misinterpretations.

All the slides/materials used by speakers during the workshop are available for you to download here.